Read All She Ever Wanted Online 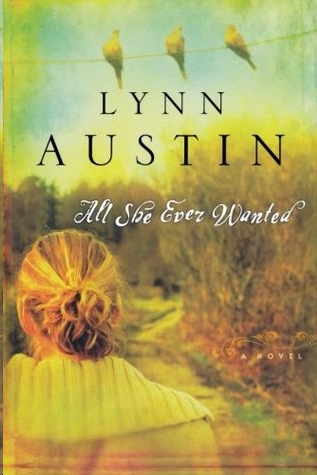 All She Ever Wanted
Copyright © 2005
Lynn Austin

To my family
Ken, Joshua, Benjamin, and Maya

LYNN AUSTIN is a three-time Christy Award winner for her historical novels
Hidden Places, Candle in the Darkness,
and
Fire by Night
. In addition to writing, Lynn is a popular speaker at conferences, retreats, and various church and school events. She and her husband have three children and make their home in Illinois.

“… give me neither poverty nor riches, but give me only my
daily bread. Otherwise, I may have too much and disown you
and say, ‘Who is the Lord?’Or I may become poor and steal,
and so dishonor the name of my God.”
—P
ROVERBS
30: 8–9

T
his wouldn’t be the first time Kathleen Seymour left home and never returned. But after the day she’d had, she was sorely tempted to pack all her clothes, climb into her Lexus, and drive as far away as a tank of gas would take her. Judging by what little she knew of her ancestors, it was almost a family tradition to leave home when things got rough and start life all over again in a new town. In fact, if the bigwigs who ran the federal Witness Protection Program wanted a few pointers on creating a new identity in a new location, they could consult Kathleen’s family. They were experts.

“I’m leaving home and never coming back!” Her sixteen-year-old daughter, Joelle, yelled, echoing Kathleen’s thoughts. Joelle stomped dramatically up the stairs to her bedroom, but the thick carpeting muffled the impact of her tantrum.

“Don’t bother!” Kathleen called up to her. “I’ll leave first!”

Joelle slammed her bedroom door in reply, rattling the teacups on the dining room shelf below her room.

“You know, I’ve had about all I can take, Joelle,” Kathleen shouted, then clapped her hand over her mouth. She’d used the same phrase, in the same tone of voice, that her own mother had always used. When had Kathleen turned into her mother?

She sank down at the kitchen table, her legs too unsteady to hold her any longer. They had begun to tremble during the confrontation with her boss a few hours ago and had barely been strong enough to carry her out to the parking lot as she’d stormed from her office building. It was a good thing that she’d been sitting down in her car, removing her high heels, when the police called on her cell phone. She might have collapsed on the spot.

“Mrs. Seymour? This is Officer Marks of the city police department. We have your daughter, Joelle Marie Seymour… in custody. …”

Kathleen couldn’t remember much after that. Somehow she’d driven to the mall, found the security office, and sweated through an agonizing meeting with Officer Marks and the undercover cop who had caught Joelle shoplifting a seven-dollar tube of lipstick from the cosmetics counter. It had seemed like a bad dream, especially Joelle’s reaction to it all. She had shown no remorse as she’d slouched in the chair with her arms folded, refusing to make eye contact and coolly swinging her foot—beautiful Joelle, with the cinnamon-colored hair that reminded Kathleen so much of her own father’s. But the last thing Kathleen needed in this situation was to be reminded of her father.

Thankfully, she was able to persuade the store manager not to press charges since it was Joelle’s first offense, but she would be banned from shopping at the mall for one year and a second offense would earn her a trip to the police station and a juvenile record. Kathleen had practically kissed Officer Marks on both cheeks.

“Where are your friends?” Kathleen asked Joelle when the police finally allowed them to leave. “Didn’t you come to the mall with Colleen and Stacey?”

Joelle shrugged. “They ditched me when I got caught.”

“Can you drop me off at Colleen’s house?” Joelle asked when they reached the car.

Kathleen stared at her in disbelief. “Are you out of your mind?”

Joelle sank into the passenger’s seat and slammed the door, ignoring her seat belt and the annoying
ping
of the warning bell. When she reached to crank up the volume on the car radio, Kathleen shoved aside her hand.

“Leave that off—and put your seat belt on!”

Kathleen felt herself losing control. She started the engine and pulled out of the mall parking lot, tires squealing. “Why would you do such a stupid thing, Joelle? What were you thinking? I give you fifty dollars a week for your allowance—what would possess you to steal a seven-dollar lipstick?”

Joelle shrugged. “It’s no big deal. They let me go.”

After that the ride home degenerated into a screaming match, ending with Joelle’s threat to leave home and never return. Kathleen had made the very same threat—how many years ago? But she had followed through on it.

Kathleen’s hands were still trembling as she reached across the kitchen table for the portable phone to call her husband. Thankfully, she got Mike himself instead of his voice mail. “What’s up, Kath?”

“You need to come home,” she said, her voice breaking.

“Can you tell me more than that? I’m kinda busy—”

“Joelle was arrested for shoplifting.” Her tears started to fall then, tears of rage and incomprehension and grief. At first she made no sound as they trickled down her face, but when she glanced up at the refrigerator door and saw the note reminding her that Joelle needed to bring a snack to the youth group meeting at church tonight, she began to sob.

He arrived in time to stop Joelle as she dragged her backpack and an overstuffed suitcase down the stairs. “I’m not letting you run away, sweetie,” he soothed. “Let’s go upstairs and talk about this.”

Kathleen wondered if Mike would have tried to stop her if she’d been the one with the suitcase instead of Joelle. She listened to their voices drifting down from upstairs, envying the relationship they had, aware that she had blown it once again. She and Joelle fought just like Kathleen and her own mother used to fight—maybe more. Kathleen kept promising herself that she would try harder to be a better, more caring mother, but she didn’t know how or where to begin.

She reached for the framed snapshot—taken last winter on their skiing trip to Colorado—that she kept on her desk in the kitchen. All three of them were smiling as they squinted in the glare of winter sun, their faces scrunched together in a rare moment of bonding, a picture-perfect family. Mike’s habitual worry lines were relaxed into smile lines, and his bristly, steel-gray hair was hidden beneath a ski cap, making him look younger than his fifty-eight years. Kathleen herself was used to being told that she didn’t look fifty-four—thanks to regular workouts at the health club and a creative hairdresser who kept Kathleen’s light-brown hair fashionably styled and free from encroaching gray. She had been thirty-eight when Joelle was born, after years of medical procedures and countless prayers. She’d vowed to stay young looking for her daughter’s sake, but today she felt like the wicked old crone in a bad fairy tale.

In the photograph Joelle’s reddish-brown hair was a mass of natural curls, framing a face that still held a child’s softness and innocence, yet hinted at the promise of womanly beauty and sensuality. “Lord, help us,” Kathleen breathed, closing her eyes. Joelle was only sixteen and already in trouble—God only knew what lay ahead.

“I’ve got her settled down,” Mike said when he came downstairs an hour later. He had loosened his tie and rolled up the sleeves of his starched, white shirt. “But I think you should go up and talk to her. Let her know you still love her.”

The Story of Land and Sea: A Novel by Katy Simpson Smith
The Face of Another by Kobo Abé
Ava Comes Home by Lesley Crewe
Jack Kursed by Glenn Bullion
Blood Riders by Michael P. Spradlin
The Officer and the Southerner (Historical Western Romance) (Fort Gibson Officers Series, Book 2) by Gordon, Rose
Journeys on the Silk Road by Joyce Morgan
Expose! by Hannah Dennison
Reality Check by Calonita, Jen
Kiss Her Goodbye by Allan Guthrie