Read All the Single Ladies Online

All the Single Ladies 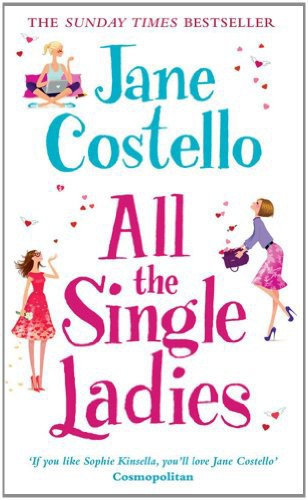 Girl on the Run

The right of Jane Costello to be identified as author of this work has been asserted by her in accordance with sections 77 and 78 of the Copyright, Designs and Patents Act,
1988.

This book is a work of fiction. Names, characters, places and incidents are either a product of the author’s imagination or are used fictitiously. Any resemblance to
real people, living or dead, events or locales, is entirely coincidental.

It’s been five years since I signed my first book deal, an ambition to which I’d aspired for as long as I can remember.

For that reason, I’d like to extend a special thanks on the publication of
All The Single Ladies
to Darley Anderson and Suzanne Baboneau, the two people who agreed that deal and
launched a career that’s fulfilled dreams I didn’t even dare contemplate.

Thanks also Clare Wallace and Maddie Buston at the Darley Anderson Agency, the brilliant Maxine Hitchcock, Libby Yevtushenko and Clare Hey at Simon & Schuster, and my copy editor Clare
Parkinson.

Finally, a mention to my incredible friends (you know who you are), my lovely boyfriend Mark O’Hanlon, my mum and dad, and my two gorgeous children, Otis and Lucas.

There’s a time and a place in which to have an emotional breakdown – and the edge of a bus lane while the AA man twiddles with your spark plugs isn’t it.
Sadly, the knowledge that my hysterical short breaths and raging tears are woefully misplaced does nothing to quell them.

He’s pretending not to notice, instead peering into the depths of the bonnet, preferring to risk setting his head on fire than confront a woman in my state of disquiet. He knows
what’s happening, though. It’d be impossible not to. Every time the traffic on the busy dual carriageway dies down and I fail miserably to compose myself, the whine of passing cars is
replaced by my frenzied snorts, which would rival those of a wild boar at the height of the mating season.

My mobile rings and I take it out of my jeans pocket and answer it. Except I can’t answer it, not with words. A whimper is as articulate as it gets.

‘Where are you, sweetheart?’ my best friend, Ellie, asks with the urgency required for the Code Red status of this crisis. ‘I expected you half an hour ago.’

I sniff, attempting to restrain the runny nose that’s chosen this moment to unleash itself. ‘My car broke down.’

‘Again? You’d be better in a horse and cart. Get a taxi. Seriously.’ This is an instruction, not a suggestion. ‘You can’t be by yourself.’

‘Sam,’ she tuts. ‘Being the fourth emergency service doesn’t stretch to psychological support.’

The comment makes me wince. This isn’t like me at all. I am unflappable in a crisis; I keep my head when those around me lose theirs. I’m a person who sees solutions, not problems,
who’s unfazed by unpredictability and immune to near-catastrophe. Not that you’d know it to look at me. My composure remains as intact as my mascara and, as the charcoal mess on my
cheeks indicates, that’s . . . not at all.

‘Nearly done,’ says Mr AA, momentarily popping up his head, before dipping it again fast enough to absolve me of the need to respond.

‘Good,’ she replies. ‘Though if “nearly” means ten minutes then fine. Any longer and you must get a taxi.’

In fact, it’s less than ten minutes – and would probably be even less than that if the AA man didn’t obviously have to wait for a pause in my weeping before conversing with
me.

‘That should be fine for you now,’ he says, wiping his hands with a rag and refusing to make eye contact. I’d guess he’s in his fifties, though he could be older, with
hair that was once ginger but has aged to blond.

He looks solid and dependable, the sort of man who, after his shift, will have a single beer while he watches a repeat of
Midsomer Murders
, then pull on his M&S pyjamas and slip into
bed in the hope that Mrs AA hasn’t got a headache.

I feel a swell of admiration for this man whose low-octane existence is quite enough for him, who sees the uncomplicated pleasures of suburban living as the source of nothing but happiness.

‘I’ve done enough to tide you over, but you need to get this car to a garage in the next couple of days,’ he says, before reeling off a list of problems that sounds like the
index in a Haynes manual.

‘Thank you,’ I mutter, instantly forgetting everything he’s said.

‘Sign here.’ He hands me a clipboard and I’m halfway through my signature when emotion hits me again in another thrashing wave. As the sting of tears bites my cheeks, the AA
man shifts uncomfortably.

‘Are you okay, love?’ he asks gently.

The blindingly obvious fact that I’m not okay doesn’t matter. There’s a part of me that’s glad he’s asked, because I want to explain. About the fact I’m not
some emotional jellyfish who regularly contemplates throwing herself off a cliff. About this behaviour being unheard of – for me. About my world having been turned upside down so violently I
feel dizzy. But, most of all, I want to explain about Jamie. Only, I’m not in such a state that I don’t recognize a man who wouldn’t appreciate a conversation of that nature.

‘Ah,’ he replies sympathetically. ‘I don’t know what to say. It happens to the best of us.’

He hands me the keys and his mobile rings. I head to the car as he begins discussing an instruction to pick up some margarine on the way home. ‘Yes, sweetheart, the slimming stuff –
I know.’

He’s keen to get off the phone – she’s obviously one of life’s talkers – but the fondness in his voice is unmistakable. As he ends the call, I ponder why it is that
some men spend years with a woman – existing in a state in which a lack of drama and excitement is more than compensated for by quiet contentment – while others can’t last the
distance. Others need more than just contentment.

‘Boyfriend,’ he corrects me and heads to his van.

I slide into the car and throw my handbag on the passenger seat, where it joins a handful of letters I picked up yesterday on my way out. I gaze at the one on top: my welcome pack after
sponsoring a child in Eastern Europe. I pick it up and it strikes me how, twenty-four hours ago, when I first looked at this simple, pedestrian thing – an envelope – my life was
completely different.

Now, for the first time in six years, I’m alone.

And it’s the worst feeling in the world.

I arrive at Ellie’s house shortly afterwards and she opens the door with the sort of expression you’d use to gaze upon a tortured kitten. She lives in Woolton, a
couple of miles from me in south Liverpool.

Not that I’m surprised at her reaction; I could barely bring myself to glance in my car mirror on the way here.

Despite last week’s cut, my long, dark bob, which usually has a passable amount of va-va-voom, is scraped into such a haphazard ponytail that it’d shame a Blackpool donkey.

My skin, usually the tans-easily kind, has developed a pallor comparable to that of someone recovering from the Black Death; it’s a fetching shade of grey offset by red neck blotches that
appeared at the start of my weeping marathon at six o’clock this evening.

And despite the fact that I’ve been on a health kick for the last six years (in which I’ve counted an infinite number of calories and plummeted from a size twelve to a . . . erm,
size twelve), my jeans already feel baggy and shapeless as if just a hint of the now-inevitable Heartbreak Diet has shrunk me.

Fifth Ave 02.5 - From Manhattan With Love by Smith, Christopher
The Voyage of Lucy P. Simmons by Barbara Mariconda
(Shadowmarch #2) Shadowplay by Tad Williams
Legacy of a Dreamer by Allie Jean
Tag Against Time by Helen Hughes Vick
Run To Earth (Power of Four) by Mazhar, S
All Alone in the Universe by Lynne Rae Perkins
Bulletproof by Melissa Pearl
Trigger by Carol Jean
Alluring Seduction (Bayou Stix) by Turner, Skye