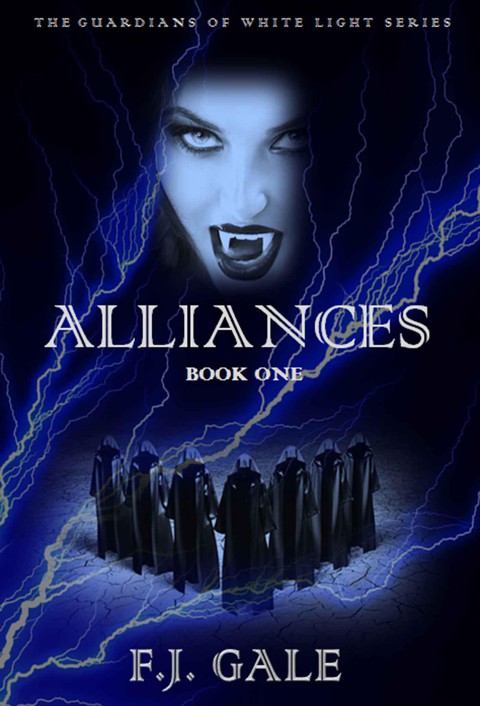 Other Books by F.J. Gale

This book is a work of fiction. Any resemblance to actual persons, living or dead, events or locales is entirely coincidental.

Alliances. A Guardians of White Light novel (Book One)

No part of this book may be reproduced, stored in a retrieval system, or transmitted, in any form, or by any means, electronic, mechanical, photocopying, recording or otherwise, without prior permission of the author.

Nancy K, thank you for your invaluable assistance with this novel. You helped it immensely.

“You want n’other?” Peter, the barkeep, rasped in a gravely baritone that gave away both his advanced age and his penchant for smoking a pack and a half of cigarettes a day.

He addressed the familiar patron before him. A frequent customer to
Rambler’s Inn,
his immense form demanded the attention of those around him. But that was only upon first glance for there was something inexplicable about him that cast him quickly into shadow. Quickly
back
into shadow. He’d been coming here for more years than Peter could recall. What was it? Nine? Ten? Yes, it was ten. And, still the only thing he concretely knew about him was his first name. Mathias. Peter had thought it an odd name for such a young man, no more than thirty, he was certain.

Peter stole a quick glance at Mathias, still awaiting a response to his question. Mathias sat, hunched over the bar, one elbow resting on the counter supporting the hand that held the side of his face. The other hand nursed a glass devoid of all but one drop of whiskey to which his eyes appeared to be transfixed. He seemed entranced by his thoughts and completely unaware of his surroundings. Peter surmised that he was likely completely intoxicated. He couldn’t even recall how many glasses of Jack he’d already served him in the last hour or so. No man, even a heavyweight alcoholic could withstand as great a volume of alcohol as this man. Night after night he was here. He didn’t socialize; play pool or any of it. Drinking was his sole purpose. Every night he left at the same time. As soon as a ray of light could be seen through the dirtied glass of the unkempt window panes he was gone like a bat out of hell. It was the only time he saw a reaction from him. Peter reprimanded himself for prying too much into the lives of his customers. It was an occupational hazard.

This time his slightly sharper tone elicited a reaction. Mathias’ eyes met his. An involuntary shiver betook Peter. Mathias’ glance was not unkind or threatening yet somehow it unnerved him. His eyes spoke a warning to all those who they looked upon. Just a shade lighter than a deep royal blue they were unavoidably enthralling. They traveled into the very soul of anyone who became the object of his glance. It was near impossible to look away first. The barkeep had never seen anything like it in any man. It seemed as though Mathias could recount a thousand stories should he ever be so inclined to actually speak with another living person. But it was doubtful that would occur; Peter could see why he drank, why he kept to himself. His eyes told of great sadness and a grief beyond consolation or acceptance. A man could hide a lot of things but not that. It bled into the atmosphere.

He brushed a few strands of his shaggy ebony hair out of his eyes and shook his head at Peter. He’d had enough for one night. But, unfortunately, a curse of being what he was meant that no matter the volume of alcohol he consumed he could never be drunk enough. He was still lucid, still functional, albeit a little tired.

He sluggishly eased himself off his stool and got to his feet. He reached into the back pocket of his charcoal-dyed jeans, searching for some cash to cover his bill. Unsuccessful, he delved into the inside pocket of his equally dark well-worn leather jacket. He slapped a few bills onto the bar counter, nodded respectfully at the barkeep, and walked out of the establishment.

“See ya tomorrow,” the barkeep called after him.

Mathias raised his hand wearily before exiting out into the back alley. He
would
be back tomorrow night. He’d spent most nights drinking himself into a stupor for the last few years. He was constantly in a state of intoxication. It was only then that he was granted a few fleeting moments of peace.

He drank to forget. To forget
her
. She’d been gone for almost a decade, yet her memory still haunted him.
Liana.
That day when he’d witnessed her untimely demise infiltrated his thoughts, a continuous replay enacted through painful slow motion. In living, everything that was gained was inevitably lost. It was the curse of the immortal. There was no stasis, no constant. Everything came and went. It was in their nature to accept it and forget what was gone and go on ‘living’, looking for the next thing that came along. But with her it had been different. He couldn’t simply go on. He couldn’t escape her memory.

It hurt too much.

He breathed in the invigorating scent of the fresh morning dew. He had no more than an hour to seek safety from the coming of the sun’s smoldering rays. Lighting a cigarette, he made his way out of the back alley and began the twenty-minute walk home to his sanctuary, Loch Cemetery.

As he navigated the maze of back-streets that could have given Theseus and the Minotaur a run for their money, he suddenly stopped short at the sound of a piercing female scream.

He hurried towards the sound, smelling fresh human blood before he saw it. It was intoxicating and it took him a moment to remember his agenda.

Who dared to feed on humans in his town?

Before him were six vampires cornering three humans. One was already feeding on a leggy blonde ridiculously dressed in stiletto heels in the middle of an alleyway. Prime target. The vampire withdrew his fangs from the woman’s neck and growled with satisfaction as he savored her taste. Mathias recognized him instantly. Arthur, the reckless son of Silas, the leader of Immortalia.

The son of his mortal enemy.

“Immortalia is not welcome here,” he growled, feeling his features morph to his demon face in response to both the smell of blood and the inevitable battle that he knew was before him.

“Mathias,” Arthur greeted. He glanced at the woman he held in his grip, and, squeezing her neck viciously, flung her away. She cried out as her limp body hit the dirty brick wall and crashed to the ground. “Rumor was that you lived around these parts.”

“Feeding on humans is not permitted here,” Mathias told him coolly, as he took a drag of his cigarette.

Arthur took an impetuous angry step towards him, yelling, “You’re trying to protect them over your own kind! This is who we are, Mathias. You walk amongst them, live in their world, but you will never be one of them. They will never accept your true face.”

As usual, Mathias remained calm and composed. He stubbed out his smoke and said, “Immortalia has brought the human world down upon us. They are out for blood. They hunt us now. This place is one of few that they have not targeted, because I have outlawed feeding from humans. Now, you come here and disturb the peace. They will come for all vampires living here now.”

“You think hiding in the shadows and feeding off filthy animal blood will stop them? Humans annihilate what they fear. You and my father have witnessed it throughout history, Mathias. And, right now, it us they fear.”

Mathias’ senses were on fire. He could feel the presence of at least three vampires approaching him from behind as Arthur continued his rant in an effort to distract him. But, young as he was, barely a century old, he had seriously underestimated his opponent. Inconspicuously, Mathias grasped the butt of a stake that he’d slid from his coat sleeve.

“Silas is bringing war upon the vampire world. If we lay low for a while this will pass. I’ve seen it time and time again. We can avoid all of this,” Mathias said, even as he concentrated on the movements of the vampires behind him.

“Not an option. We are stronger, faster, and better than them. We are the master species and we must claim what should already be ours. This will be
our
world.”

Mathias watched a sly smile creep across Arthur’s lips and then he made his first real mistake. His eyes shifted to the vampires behind Mathias, unknowingly confirming their precise location to him.

Mathias spun around with such speed that the vampire closest to him didn’t have the opportunity to react. He grabbed his shoulder and forced him into him, driving his stake through his heart.

The two remaining vampires rushed at him responding to Arthur’s irate panicked orders.

But Mathias was far too much of an experienced warrior for them to best. Within moments they too became nothing more than ashes. He turned back to face Arthur and his two bodyguards who now stood either side of him. He twirled his stake expertly around in his hand eyeing them with an intimidating, fiery glare. He hadn’t even broken a sweat. Taking out the rest of them wouldn’t be a problem. And, judging by the contradictory expression on Arthur’s face of awe and fear he knew it too.

Arthur held up his hand instructing his bodyguards to yield and stand down.

“Silas will seek retribution for this.”

Mathias snorted with amusement at the ridiculousness of such a threat. He spoke of retribution from Silas? Silas would not dare to go after him, not after what had occurred the last time the two of them had faced off. Both bore the scars of such a battle, but it was Silas whose undead life had nearly ended that night. He had only survived because of his minions’ interference in Mathias’ kamikaze act of revenge. Silas had taken her life and destroyed his as a result.

But vengeance would not bring her back. He hadn’t attempted it a second time. Instead, he’d slipped into the depths of mourning. Almost a decade had passed, but he had still not emerged from it.

He found his hands shaking with a rage that burned like sunlight on skin. Merely recalling what Silas had done shifted his characteristic cool levelheaded demeanor to one of seething anger.

The Baron Next Door (Prelude to a Kiss) by Erin Knightley
Nobleza Obliga by Donna Leon
The Sun Rises (Southern Legacy Book 4) by Hines, Jerri
His Virgin Acquisition by Maisey Yates
Untangling Christmas by Jean Little
What's Meant To Be by Kels Barnholdt
Zombie Anthology by Anthology
Marching Bands Are Just Homeless Orchestras by Siedell, Tim
A Better Man (The Men of Halfway House) by Reese, Jaime
Disaster Status by Calvert, Candace