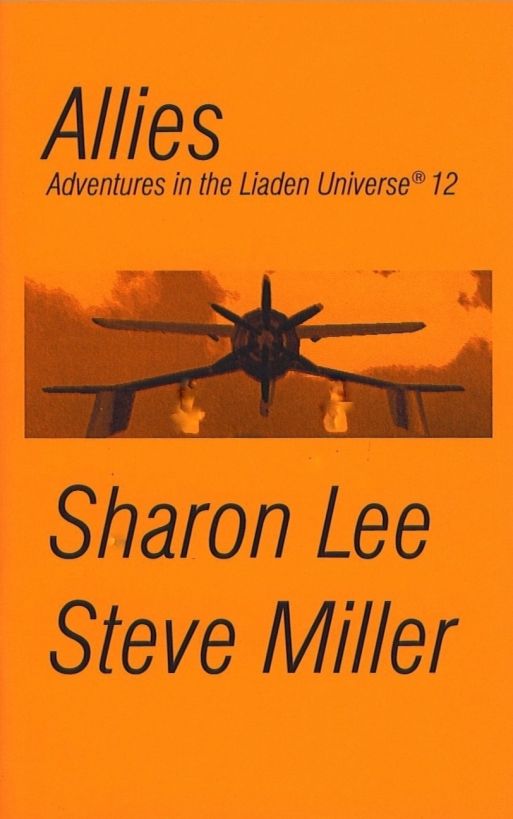 Adventures in the Liaden Universe®

Copyright © 2006, 2011
by
Sharon Lee
and
Steve Miller
. All rights reserved. No part of this publication may be
reproduced or transmitted in any form or by any means, electronic
or mechanical, without permission in writing from the author.
Please remember that distributing an author's work without
permission or payment is theft; and that the authors whose works
sell best are those most likely to let us publish more of their
works.

This ebook is licensed for your personal
enjoyment only. This ebook may not be re-sold or given away to
other people. If you would like to share this book with another
person, please purchase an additional copy fo reach recipient. If
you're reading this book and did not purchase it, or it was not
purchased for your use only, the please return to Smashwords.com
and purchase your own copy. Thank you for respecting the hard work
of this author

Dedicated to the memory of Don Miller,

who kept the cats and

"Try it now," Miri called, and folded her
arms over her eyes.

There was a couple seconds of nothing more
than the crunchy sound of shoes against gritty floor, which would
be Penn moving over to get at the switch.

"Trying it now," he yelled, which was more
warning than his dad was used to giving. There was an ominous
sizzle, and a mechanical moan as the fans started in to
work–picking up speed until they was humming fit to beat and nor
yet there hadn't been a flare-out.

Miri lowered her arms carefully and squinted
up into the workings. The damn' splice was gonna hold this
time.

"Pressure's heading for normal," Penn
shouted over the building racket. "Come on outta there, Miri."

"Just gotta close up," she shouted back, and
wrestled the hatch up, holding it with a knee while she used both
hands to seat the locking pin.

That done, she rolled out. A grubby hand
intersected her line of vision. Frowning, she looked up into Penn's
wary, spectacled face; and relaxed. Penn was OK, she reminded
herself, and took the offered assist.

Once on her feet, she dropped his hand and
Penn took a step back, glasses flashing as he looked at the
lift-bike.

Miri shrugged. The 'bike belonged to Jerim
Snarth, who'd got it off a guy who worked at the spaceport, who'd
got it from–don't ask don't tell. Miri's guess was that the 'bike's
original owner had gotten fed up with it breaking down every third
use and left it on a scrap pile.

On the other hand, Jerim was good for the
repair money, most of the time, which meant Penn's dad paid Miri on
time, so she supposed she oughta hope for more breakdowns.

"Must've wrapped every wire in that thing
two or three times by now," she said to Penn, and walked over to
the diagnostics board. Pressure and speed had come up to spec and
were standing steady.

"My dad said let it run a quarter-hour and
chart the pressures."

Miri nodded, saw that Penn'd already set the
timer and turned around.

Penn shrugged his shoulders. "The 'bike was
everything on the schedule," he said, sounding apologetic. "Me, I'm
supposed to get the place swept up."

Miri sighed to herself. "Nothing on
tomorrow, either?"

"I don't think so," Penn muttered, feeling
bad about it, though it wasn't no doing of his–nor his dad's
either. Though some extra pay would've been welcome.

"I'll move on down to Trey's, then," she
said, going over to the wall where the heavy wool shirt that served
as her coat hung on a nail next to Penn's jacket. "See if there's
anything needs done there."

She had to stretch high on her toes to reach
her shirt–damn' nails were set too high. Or she was set too low,
more like it.

Sighing, she pulled the shirt on and did up
the buttons. If Trey didn't have anything–and it was likely he
wouldn't–then she'd walk over to Dorik's bake shop. Dorik always
needed small work done–trouble was, she only ever paid in goods,
and it was money Miri was particularly interested in.

She turned 'round. Penn was already
unlimbering the broom, moving stiff. Took a hiding, she guessed.
Penn got some grief on the street–for the glasses, and for because
of being so good with his figures and his reading and such which he
had to be, his dad owning a mechanical repair shop and Penn
expected to help out with the work, when there was work. Hell, even
her father could read, and figure, too; though he was more likely
to be doing the hiding than taking it.

"Seen your dad lately?" Penn asked, like
he'd heard her thinking. He looked over his shoulder, glasses
glinting. "My dad's got the port wanting somebody for a cargo crane
repair, and your dad's the best there is for that."

"Ain't seen him since last month," she told
Penn, and deliberately didn't add anything more.

"Right." Penn turned back to the broom, and
Miri moved toward the hatch that gave out onto the alley.

Outside, the air was pleasantly cool. It had
rained recently, so the breeze was grit-free. On the other hand,
the alley was slick and treacherous underfoot.

Miri walked briskly, absentmindedly
surefooted, keeping a close eye on the various duck-ins and hiding
spots. This close to Kalhoon's Repair, the street was usually OK,
Penn's dad paying the local clean-up crew a percentage in order to
make sure there wasn't no trouble. Still, sometimes the crew didn't
come by, and sometimes they missed, and sometimes trouble herded
outta one spot took up in another.

She sighed as she walked, wishing Penn
hadn't mentioned her father. He never did come home no more except
he was smoked or drunk. Or both. And last time–it'd been bad last
time, the worst since the time he broke her arm and her mother–her
tiny, sickly, soft-talking mother–had gone at him with a piece of
the chair he'd busted to let 'em know he was in.

Beat him right across the apartment and out
the door, she had, and after he was in the hall, screamed for all
the neighbors to hear, "You're none of mine, Chock Robertson! I
deny you!"

That'd been pretty good, that denying
business, and for a while it looked like it was even gonna
work.

Then Robertson, he'd come back in the middle
of the night, drunk, smoked, and ugly, and started looking real
loud for the rent money.

Miri'd come out of her bed in a hurry and
run out in her shirt, legs bare, to find him ripping a cabinet off
the wall. He'd dropped it when he seen her.

"Where's my money?" he roared, and took a
swing.

She ducked back out of the way, and in that
second her mother was there–and this time she had a knife.

"Leave us!" she said, and though she hadn't
raised her voice, the way she said it'd sent a chill right through
Miri's chest.

Chock Robertson, though, never'd had no
sense.

He swung on her; she ducked and slashed,
raising blood on his swinging arm. Roaring, he swung again, and
this time he connected.

Her mother went across the room, hit the
wall and slid, boneless, to the floor, the knife falling out of her
hand.

Her father laughed and stepped forward.

Miri yelled, jumped, hit the floor
rolling–and came up with the knife.

She crouched, the way she'd seen the street
fighters do, and looked up–a fair ways up–into her father's
face.

The wonder of the moment being, she thought
as she turned out of Mechanic Street and onto Grover, that she'd
meant it.

It must've shown on her face, because her
father didn't just keep on coming and beat her 'til all her bones
were broke.

"We paid the rent," she snarled, which was a
lie, but he took it, for a second wonder, and–just walked away. Out
of the apartment, down the hall and into the deepest pit of hell,
as Miri had wished every day after.

That smack'd broke something, though Braken
didn't find no busted ribs. The cough, though, that was worse–and
she was spittin' up blood with it.

Her lungs, Braken'd said, and nothin' she
could do, except maybe ask one of Torbin's girls for a line on some
happyjuice.

The dope eased the cough, though it didn't
stop the blood, and Boss Latimer's security wouldn't have her in
the kitchen no more, which meant no wages, nor any leftovers from
the fatcat's table.

Miri was walking past Grover's Tavern and it
was a testament to how slim pickin's had been, that the smell of
sour beer and hot grease made her mouth water.

She shook her head, tucked her hands in her
pockets and stretched her legs. 'Nother couple blocks to Trey's,
and maybe there would be something gone funny in the duct work he
was too big to get into, but Miri could slide through just
fine.

Even if there wasn't work, there'd be
coffeetoot, thick and bitter from havin' been on the stove all day,
and Trey was sure to give her a mug of the stuff, it bein' his idea
of what was–

A shadow stepped out from behind the
tavern's garbage bin. Miri dodged, but her father had already
grabbed her arm and twisted it behind her back. Agony screamed
through her shoulder, and she bit her tongue, hard. Damn' if she'd
let him hear her yell. Damn' if she would.

"Here she is," Robertson shouted over her
head. "Gimme the cash!"

Out of the tavern's doorway came another
man, tall and fat, his coat embroidered with posies and his beard
trimmed and combed. He smiled when he saw her, and gold teeth
gleamed.

"Torbin," she gasped–and bit her tongue
again as her father twisted her arm.

Torbin shook his head. "I pay less for
damaged goods," he said.

Robertson grunted. "You want my advice, keep
her tied up and hungry. She's bad as her ol' lady for sneaking
after a man and doin' him harm."

Torbin frowned. "I know how to train my
girls, thanks. Let 'er go."

"Gimme my money first. After she's yours,
you can chase her through every rat hole on Latimer's turf."

"But she ain't gonna run away, are you,
Miri?" Torbin pulled his hand out of a pocket and showed her a gun.
Not a homemade one-shot, neither, but a real gun, like the Boss's
security had.

"Because," Torbin was saying, "if you try
an' run away, I'll shoot you in the leg. You don't gotta walk good
to work for me."

"Don't wanna work for you," she said, which
was stupid, and Robertson yanked her arm up to let her know it.

"That's too bad," said Torbin. "'Cause your
dad here's gone to a lot a trouble an' thought for you, an' found
you a steady job. But, hey, soon's you make enough to pay off the
loan an' the interest, you can quit. I don't hold no girl 'gainst
her wants."

He grinned. "An' you–you're some lucky girl.
Got me a man who pays a big bonus for a redhead, an' other one
likes the youngers. You're, what–'leven? Twelve, maybe?"

"Sixteen," Miri snarled. This time the pain
caught her unawares, and a squeak got out before she ground her
teeth together.