ALMOST A FAMILY: * A second chance at love?
*

Ten years ago Virginia Catron and Bailey Callihan had to get married, but they loved each other fiercely and adored their son when he came into their lives. Fate dealt them a cruel blow when their infant son was snatched in a grocery store. Their new marriage couldn't withstand the strain and when it became clear their baby would not be found, they divorced, brokenhearted and grief stricken. They haven't seen each other since their divorce was finalized. The story opens when word arrives that their son has been found...
alive
. Can these three virtual strangers come together to make a family? 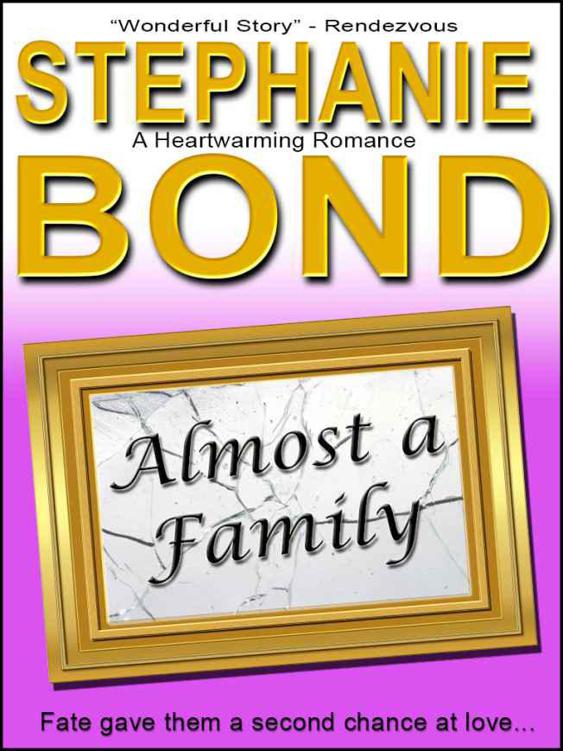 Originally published in the US in 1997 by Bantam Books

under the pen name Stephanie Bancroft.

This digital version has been updated by the author.

Without limiting the rights under copyright reserved above, no part of this publication may be reproduced, stored in or introduced into a retrieval system, or transmitted, in any form, or by any means (electronic, mechanical, photocopying, recording, or otherwise) without the prior permission of the copyright owner.

The scanning, uploading, and distributing of this book via the internet or via any other means without the permission of the copyright owner is illegal and punishable by law. Please purchase only authorized electronic editions, and do not participate in or encourage electronic piracy of copyrighted materials. Your support of the author's rights is appreciated.

Originally published in the US in 1997 by Bantam Books under the pen name Stephanie Bancroft. This digital version has been updated by the author.

Cover by Andy Brown at clicktwicedesign.com

In memory of my beloved, aunt,

a warm and funny lady who fostered

my love for books.

"Seven ball in the side pocket," Bailey Kallihan said quietly. He squinted down the length of his cue, sliding the smooth stick back and forth through spread fingers. The stares of several dozen patrons of the Sage Saloon bored into his skin. George Jones wailed mournfully in the background. A trickle of sweat slid between his shoulder blades. Rather than think about the three hundred dollars he stood to lose on this game, Bailey focused on the three hundred he intended to win.

He drew back a final time and drove the stick toward the ball.

Startled, he jerked forward and struck the ball with a dull
thwack
, sending it spiraling toward the hole. Several inches from the target, the seven ball veered and struck the eight ball in its newfound path. Bailey winced and swore as the black ball disappeared unceremoniously into the pocket. The crowd groaned in dismay.

"Scratch!" his opponent yelled above the erupting mayhem, then scooped Bailey's money off the rail with a grin.

Straightening, Bailey scowled, turned to the crowd, and demanded, "Who the hell did that?"

The spectators shrugged and parted, heads pivoting. Bailey tossed his cue stick onto the table and scanned the gathering of cowboy wannabes and their groupies. The voice had sounded female. He would never hit a woman, but if Lisa had yelled for him, she might warrant a good shaking.

A small commotion near the back seemed to be moving forward. When a couple of catcalls caught Bailey's ear, he angled himself for a better look at the emerging woman. He heard murmured apologies before she pushed her way clear and stopped to stand ten feet from him.

Recognition slammed into Bailey. He blinked hard while his heart plummeted below sea level. His skin tingled and his throat closed. The suit and hairstyle were foreign to him, but those eyes... he'd seen those caramel-colored eyes swimming with tears so many times, there was no mistaking them now, shimmering once again.

She clutched her purse in a white-knuckled grip. "Bailey," she said simply, her beautiful face passive, her voice an uneven croak.

Well, Virginia Catron wasn't a girl anymore, but from the look in her eyes, life was still batting her around. He took no pride in the fact that he'd caused most of her early heartache. But what now? A death? One of her parents perhaps?

He walked toward her on somewhat shaky legs. She inhaled sharply, her chest rising, as if gathering her strength. As he approached her, the crowd receded but remained rapt, as if sensing some climax. Two feet away he stopped, reached his hand toward her awkwardly, then shoved it in his jeans pocket at the last second. "Virginia, what's wro—"

"They found our son."

Unbound by Georgia Bell
The Miracle Worker by William Gibson
Carola Dunn by Lady in the Briars
Believe in Me: A Rosewood Novel by Laura Moore
Seeds by Kin, M. M.
Taking the Stage: Soulgirls, Book 2 by Heather Long
Paradox - Progeny Of Innocence (bk2) (Paradox series) by Patti Roberts
Theater of Cruelty by Ian Buruma
The Unspoken: Book One in the Keres Trilogy by Waller, A. E.
Dominated: A Kinky Adult Fairy Tale (Bedding the Bad Girl Book 4) by Wild, Callie