America's War for the Greater Middle East: A Military History 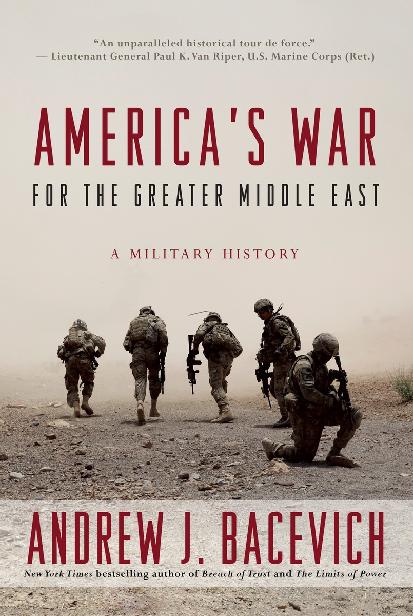 America's War for the Greater Middle East: A Military History

LONGLISTED FOR THE NATIONAL BOOK AWARD •
A searing reassessment of U.S. military policy in the Middle East over the past four decades from retired army colonel and
New York Times
bestselling author Andrew J. Bacevich
From the end of World War II until 1980, virtually no American soldiers were killed in action while serving in the Greater Middle East. Since 1990, virtually no American soldiers have been killed in action anywhere else. What caused this shift? Andrew J. Bacevich, one of the country’s most respected voices on foreign affairs, offers an incisive critical history of this ongoing military enterprise—now more than thirty years old and with no end in sight.

During the 1980s, Bacevich argues, a great transition occurred. As the Cold War wound down, the United States initiated a new conflict—a War for the Greater Middle East—that continues to the present day. The long twilight struggle with the Soviet Union had involved only occasional and sporadic fighting. But as this new war unfolded, hostilities became persistent. From the Balkans and East Africa to the Persian Gulf and Central Asia, U.S. forces embarked upon a seemingly endless series of campaigns across the Islamic world. Few achieved anything remotely like conclusive success. Instead, actions undertaken with expectations of promoting peace and stability produced just the opposite. As a consequence, phrases like “permanent war” and “open-ended war” have become part of everyday discourse.

Connecting the dots in a way no other historian has done before, Bacevich weaves a compelling narrative out of episodes as varied as the Beirut bombing of 1983, the Mogadishu firefight of 1993, the invasion of Iraq in 2003, and the rise of ISIS in the present decade. Understanding what America’s costly military exertions have wrought requires seeing these seemingly discrete events as parts of a single war. It also requires identifying the errors of judgment made by political leaders in both parties and by senior military officers who share responsibility for what has become a monumental march to folly. This Bacevich unflinchingly does.

A twenty-year army veteran who served in Vietnam, Andrew J. Bacevich brings the full weight of his expertise to this vitally important subject.
America’s War for the Greater Middle East
is a bracing after-action report from the front lines of history. It will fundamentally change the way we view America’s engagement in the world’s most volatile region.

*
Praise for
America’s War for the Greater Middle East

“Bacevich is thought-provoking, profane and fearless. . . . [His] call for Americans to rethink their nation’s militarized approach to the Middle East is incisive, urgent and essential.”
—*The New York Times Book Review
*

“Bacevich’s magnum opus . . . a deft and rhythmic polemic aimed at America’s failures in the Middle East from the end of Jimmy Carter’s presidency to the present.”
—Robert D. Kaplan, *The Wall Street Journal
*

“A critical review of American policy and military involvement . . . Those familiar with Bacevich’s work will recognize the clarity of expression, the devastating directness and the coruscating wit that characterize the writing of one of the most articulate and incisive living critics of American foreign policy.”
—*The Washington Post
*

“
America’s War for the Greater Middle East
by Andrew Bacevich lays out in excruciating detail the disasters orchestrated over decades by the architects of the American empire in the Middle East. Blunder after blunder, fed by hubris along with cultural, historical, linguistic and religious illiteracy, has shattered cohesion within the Middle East. The wars we have waged have given birth to a frightening nihilistic violence embodied in radical jihadism. They have engendered an inchoate rage among the dispossessed and left in their wake a series of failed and disintegrating states. These wars have, as Bacevich writes, laid bare the folly of attempting to use military force as a form of political, economic and social control. Bacevich is one of our finest chroniclers of the decline of empire.
America’s War for the Greater Middle East
is an essential addition to his remarkable body of work.”

—CHRIS HEDGES
, former Middle East bureau chief for
The New York Times
and author of
Wages of Rebellion: The Moral Imperative of Revolt

“Andrew Bacevich’s thoughtful, persuasive critique of America’s crusade for the Greater Middle East should be compulsory reading for anyone charged with making policy for the region. We cannot afford to repeat the past misjudgments on the area, for as Bacevich wisely argues, the stakes are nothing less than the future well-being of the United States.”

“In this fascinating work, one of America’s most provocative thinkers confronts our greatest geopolitical conundrum: the Middle East. No other book shows so clearly how U.S. interventions there have blended into a single long war. This is not just invaluable history, but also a cry of protest against policies that have devastated the Middle East while undermining America’s own national security.”

—STEPHEN KINZER
, senior fellow at the Watson Institute for International and Public Affairs at Brown University

“Andrew Bacevich has done a great service by providing a much-needed continuum in a foreign policy area that remains frustratingly random for too many Americans. He is one of a very few in academia with the credibility to outline dispassionately the shortcomings of responsible civilian and military leaders, on the facts and without histrionics or bitterness. His military background and training as a historian have enabled him to lay out not only the evolution of policy but also the details of the military endeavors themselves.”

“Andrew Bacevich is a warrior academic who understands war and has the great talent to make the complex understandable. And so he has done with our Middle East conflict, which started with Desert One and endures today. A must read for soldiers, politicians, and the American citizen.” 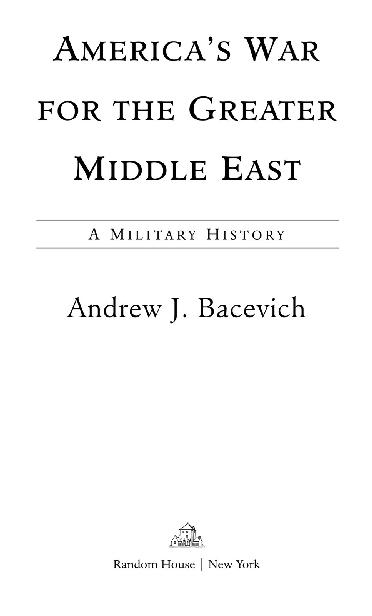 Published in the United States by Random House, an imprint and division of Penguin Random House LLC, New York.

Chapter 12: Changing the Way They Live

Chapter 13: Kicking Down the Door

Chapter 14: How This Ends

Chapter 15: Government in a Box

The Lord’s anger burned against Israel

and he made them wander in the wilderness forty years.

This Proud Heart by Pearl S. Buck
The Spider Thief by Laurence MacNaughton
The Loyal Heart by Shelley Shepard Gray
Midnight in Austenland by Shannon Hale
Rivers of Gold by Adam Dunn
Animal Prints: Sweet Small Town Contemporary Romance (Michigan Moonlight Book 1) by May Williams
A Good Clean Fight by Derek Robinson
Only with You by Lauren Layne
Stick Shift by Matthews, Lissa
No hay silencio que no termine by Ingrid Betancourt