Read Among the Living Online 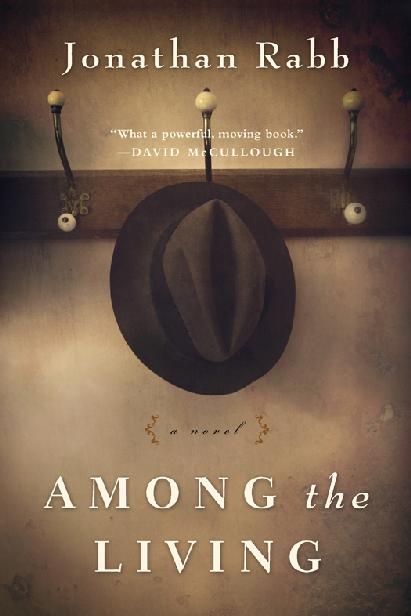 “Jonathan Rabb is one of my favorite writers, a highly gifted, heart-wise storyteller if ever there was one. What a powerful, moving book.” —David McCullough, Pulitzer Prize and National Book Award–winning author
A moving novel about a Holocaust survivor’s unconventional journey back to a new normal in 1940s Savannah, Georgia

In late summer 1947, thirty-one-year-old Yitzhak Goldah, a camp survivor, arrives in Savannah to live with his only remaining relatives. They are Abe and Pearl Jesler, older, childless, and an integral part of the thriving Jewish community that has been in Georgia since the founding of the colony. There, Yitzhak discovers a fractured world, where Reform and Conservative Jews live separate lives--distinctions, to him, that are meaningless given what he has been through. He further complicates things when, much to the Jeslers' dismay, he falls in love with Eva, a young widow within the Reform community. When a woman from Yitzhak's past suddenly appears--one who is even more shattered than he is--Yitzhak must choose between a dark and tortured familiarity and the promise of a bright new life.
Set amid the backdrop of America's postwar south,
Among the Living
grapples with questions of identity and belonging, and steps beyond the Jewish experience as it situates Yitzhak's story during the last gasp of the Jim Crow era. Yitzhak begins to find echoes of his own experience in the lives of the black family who work for the Jeslers--an affinity he does not share with the Jeslers themselves. This realization both surprises and convinces Yitzhak that his choices are not as clear-cut as he might have thought.

“[
Among the Living
] vividly reveals the complex texture of Savannah’s thriving Jewish community, its diversity as well as its heroism, but also the clash between Reform and Conservative Jews and the lingering prejudice against African Americans. This stirring, powerful novel never sugarcoats its themes or characters; what emerges is a hard-won realism and a compelling look at one corner of the postwar world.” –
Booklist

“In this amazing novel full of plot twists, Rabb examines true love, fair treatment to people of all races, how to practice honorable journalism, and what it means to be truly alive.” —
Library Journal

“Rabb is an accomplished storyteller with an eye for telling detail and for dialogue.” —
Kirkus

“Jonathan Rabb is one of my favorite writers, a highly gifted heart-wise storyteller if ever there was one. From its first pages,
Among the Living
carries you into a particular time and setting, and into the lives of people with whom you are entirely unfamiliar and holds you there with a story that will almost certainly stay with you for years to come. What a powerful, moving book.” —David McCullough, Pulitzer Prize and National Book Award–winning author, and recipient of the Presidential Medal of Freedom
“A sensitive and well-observed journey that brings the texture and spirit of its era vividly to life. Rabb’s humanistic gaze places
Among the Living
among the timeless American stories about identity.”
—Geoffrey Fletcher, Academy Award-winning screenwriter of
Precious

“
Among the Living
is a beautifully written and immensely readable love story. Jonathan Rabb has created an original and penetrating study of Judaism in the deep south and the many forms it takes.” —Alfred Uhry, Pulitzer Prize-winning author of
Driving Miss Daisy
“With a delicate but sure touch, Jonathan Rabb delves into questions of racial identity, religious expression, and cultural assimilation. His is a nuanced and evocative novel, no less readable for its rich complexity.” —Christina Baker Kline, best-selling author of
Orphan Train
“
Among the Living
contains multitudes. It’s wry and moving, lyrical and direct, historical and timely, Jewish and (above all) American. It’s the best book I’ve read in a while.” —Darin Strauss, author of
Half a Life
, winner of the National Book Critics Circle Award for Autobiography
“An insightful and evocative antidote to nostalgia about the ‘good old days’ of America’s post-World War II era.” —Mary Doria Russell, author of
The Sparrow
,
A Thread of Grace
, and
Epitaph

Jonathan Rabb
is an American novelist, essayist, and writer. He is the author of five novels, including The Berlin Trilogy (
Rosa
,
Shadow and Light
, and
The Second Son
), a critically acclaimed series of historical thrillers.
Rosa
won the 2006 Director’s Special Prize at Spain’s Semana Negra festival, and was named one of
January Magazine
’s Best Books of 2005. Rabb has taught at Columbia University, New York University, the 92nd Street Y, and is currently a professor in the writing department at the Savannah College of Art and Design.

The Book of Q 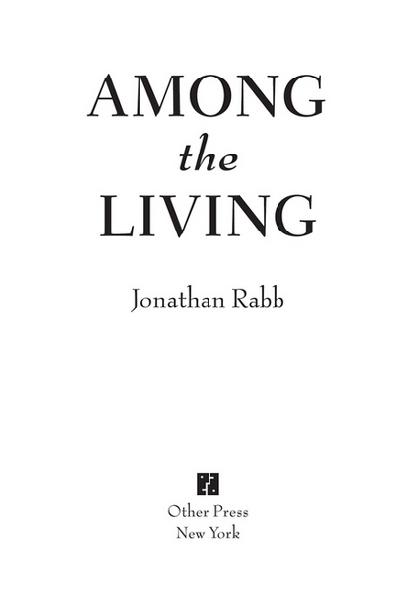 All rights reserved. No part of this publication may be reproduced or transmitted in any form or by any means, electronic or mechanical, including photocopying, recording, or by any information storage and retrieval system, without written permission from Other Press LLC, except in the case of brief quotations in reviews for inclusion in a magazine, newspaper, or broadcast. For information write to Other Press LLC, 267 Fifth Avenue, 6th Floor, New York, NY 10016. Or visit our Web site:
www.otherpress.com

Title: Among the living / Jonathan Rabb.

For Marta, Jodi, and Edi

We said to each other things that are not said among the living.

YITZHAK GOLDAH
pressed his sallow brow to the glass and stared out at the slowing platform. It was late summer and he felt the beads of his sweat gather like warm rain on his skin. Down a ways a small black boy walked alongside the train. He was carrying a stack of newspapers and barked out the headlines in a voice that was far too low for his frame. Goldah had read the papers in New York. He had read them in Washington, in Richmond, in Raleigh. He would read them here. They all spoke of America and of confidence, and he marveled at their certainty.

Standing there, Goldah looked perfectly human. His suit hung crisply on his frame and lent it a heft that wasn’t his. He was like a sail still holding its shape even after the wind has died away. He braced himself for the train’s final heave, then took his suitcase and hat and followed the line of passengers to the door. Down on the platform the smell quickly turned to coal dust and scorched metal. The cement and well-washed marble reminded him of distant places from before the war, the iron beams thick and vaulted. Goldah walked and peered ahead and waited for the first glimpse of his future.

It was there, just beyond the single chain between stanchion and gate. A man, early fifties, stood in a suit that was
far more forgiving of the heat than Goldah’s own. The wife was younger, thicker, and with a netted hat to match the floral print of her dress. They stood without moving, like two potatoes, upright, full, misshapen, and solid.

Goldah handed the guard his ticket and nodded as if only now he had seen them. The woman raised her hands with too much enthusiasm, scurried over, and they met, all three, as Goldah placed his suitcase on the ground.

“Yitzhak Goldah, yes.” Goldah had learned to repeat when he could.

The man’s tone was low and smooth, and his words came in a lumbering ease: This was the voice of America’s South. The woman’s, when she spoke, carried more breath, as if her words were meant to float atop the heat.

“We’re so delighted to meet you,” she said.

“You made it, then — no difficulties?”

“Good, that’s good,” said the man. “Not much of an accent there. I was expecting — well, we were expecting more of an accent, weren’t we, Pearl? That’ll serve you well.”

“Well …” This seemed the perfect moment for a handshake or embrace but instead, the man took the suitcase. “Okay then.” They began to walk. “Are there still Jeslers in Brno? My family was from Brno.”

It was a moment too long before the man realized the carelessness in the question. He had spent the drive to the station telling himself to avoid such things, history and families and place. The man often spent drives talking to himself. It was instinct and careless.

Jed's Sweet Revenge by Deborah Smith
Vengeance by Karen Lewis
Jalia on the Road (Jalia - World of Jalon) by John Booth
Unexpected Love by Melissa Price
The Lost and Found of Years by Claude Lalumiere
Laura Lippman by Tess Monaghan 04 - In Big Trouble (v5)
Bloodfire (Blood Destiny) by Harper, Helen
The Brea File by Charbonneau, Louis
the Other Wes Moore (2010) by Moore, Wes
Goddess of Love by P. C. Cast