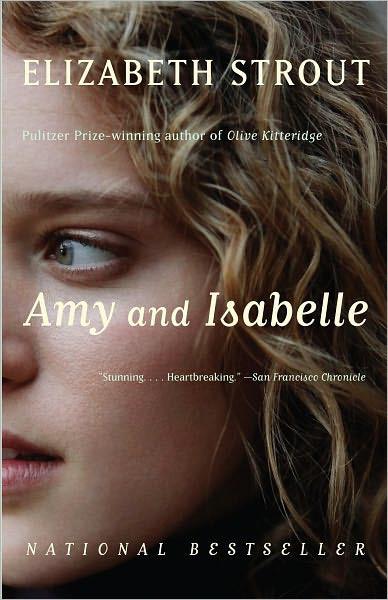 “
Amy and Isabelle
is an impressive debut novel … with an expansiveness and inventiveness that is the mark of a true storyteller.”

“If you read one book all year, let it be this exquisite first novel.”

“Strout’s insights into the complex psychology between [mother and daughter] result in a poignant tale about two comings of age.”

“Poignant … sensitively imagined.… [
Amy and Isabelle
] recalls … something of the elegiac charm of
Our Town
.”

“Elizabeth Strout’s auspicious first novel … is tender and vigorous, full of surprising turns and quiet unfoldings, and it has a realism that is at once lovely and unsparing in its power.”

“The reader discovers [in
Amy and Isabelle
] a writer whose respect and care for her characters demand ours.”

“Elizabeth Strout shows a remarkable gift for honing in on and illuminating the most subtle nuances of time, place, and mood so that, in her hands, characters become astonishingly real.”

“Seldom has a writer captured the complexities of the love, pain and forgiveness between mother and daughter as well as this promising young novelist.”

“Strout has an uncanny ability to portray the poignant power struggle between teenage girls and their mothers.… [A] finely crafted novel.”

Born in Portland, Maine, Elizabeth Strout now lives in New York City with her husband and daughter. She has been teaching literature and writing at Manhattan Community College for ten years and has also taught writing at the New School. Her fiction has appeared in many magazines, including
The New Yorker
.

Vintage is a registered trademark and Vintage Contemporaries and colophon are trademarks of Random House, Inc.

This is a work of fiction. The characters and events in it are inventions of the author and do not depict any real persons or events.

Their support has been immeasurable
.

IT WAS TERRIBLY hot that summer Mr. Robertson left town, and for a long while the river seemed dead. Just a dead brown snake of a thing lying flat through the center of town, dirty yellow foam collecting at its edge. Strangers driving by on the turnpike rolled up their windows at the gagging, sulfurous smell and wondered how anyone could live with that kind of stench coming from the river and the mill. But the people who lived in Shirley Falls were used to it, and even in the awful heat it was only noticeable when you first woke up; no, they didn’t particularly mind the smell.

What people minded that summer was how the sky was never blue, how it seemed instead that a dirty gauze bandage had been wrapped over the town, squeezing out whatever bright sunlight might have filtered down, blocking out whatever it was that gave things their color, and leaving a vague flat quality to hang in the air—this is what got to people that summer, made them uneasy after a while. And there were other things too: Further up the river crops weren’t right—pole beans were small, shriveled on the vine, carrots stopped growing when they were no bigger than the fingers of a child; and two UFOs had apparently been sighted in the north of the state. Rumor had it the government had even sent people to investigate.

In the office room of the mill, where a handful of women spent their days separating invoices, filing copies, pressing stamps onto envelopes with a thump of the fist, there was uneasy talk for a while. Some thought the world might be coming to an end, and even those women not inclined to go that far had to admit it might not have been a good idea sending men into space, that we had no business, really, walking around up there on the moon. But the heat was relentless and the fans rattling in the windows seemed to be doing nothing at all, and eventually the women ran out of steam, sitting at their big wooden desks with their legs slightly apart, lifting the hair from the back of their necks. “Can you
believe
this” was, after a while, about all that got said.

One day the boss, Avery Clark, had sent them home early, but hotter days followed with no further mention of any early dismissal, so apparently this wasn’t to happen again. Apparently they were supposed to sit there and suffer, and they did—the room held on to the heat. It was a big room, with a high ceiling and a wooden floor that creaked. The desks were set in pairs facing each other, two by two, down the length of the room. Metal filing cabinets lined the walls; on top of one sat a philodendron plant, its vines gathered and coiled like a child’s clay pot, although some vines escaped and fell almost to the floor. It was the only green thing in the room. A few begonia plants and a wandering Jew left over by the windows had all turned brown. Occasionally the hot air stirred by a fan swept a dead leaf to the floor.

In this scene of lassitude was a woman who stood apart from the rest. To be more accurate, she sat apart from the rest. Her name was Isabelle Goodrow, and because she was the secretary to Avery Clark, her desk did not face anyone. It faced instead the glassed-in office of Avery Clark himself, his office being an oddly constructed arrangement of wood paneling and large panes of glass (ostensibly to allow him to keep an eye on his workers, though he seldom looked up from his desk), and it was commonly referred to as “the fishbowl.” Being the boss’s secretary gave Isabelle Goodrow a status different from the other women in the room, but she was different anyway. For example, she was impeccably dressed; even in this heat she wore pantyhose. At a glance she might seem pretty, but if you looked closer you saw that in fact it didn’t really get that far, her looks stopped off at plain. Her hair was certainly plain—thin and dark brown, pulled back in a bun or a twist. This hairstyle made her look older than
she was, as well as a little school-marmish, and her dark, small eyes held an expression of constant surprise.

While the other women tended to sigh a great deal, or make trips back and forth to the soda machine, complaining of backaches and swollen feet, warning each other against slipping off shoes because you’d never in a hundred years get them back on, Isabelle Goodrow kept fairly still. Isabelle Goodrow simply sat at her desk with her knees together, her shoulders back, and typed away at a steady pace. Her neck was a little peculiar. For a short woman it seemed excessively long, and it rose up from her collar like the neck of the swan seen that summer on the dead-looking river, floating perfectly still by the foamy-edged banks.

Or, at any rate, Isabelle’s neck appeared this way to her daughter, Amy, a girl of sixteen that summer, who had taken a recent dislike to the sight of her mother’s neck (to the sight of her mother, period), and who anyway had never cared one bit for the swan. In a number of ways Amy did not resemble her mother. If her mother’s hair was dull and thin, Amy’s hair was a thick, streaky blond. Even cut short the way it was now, haphazardly below her ears, it was noticeably healthy and strong. And Amy was tall. Her hands were large, her feet were long. But her eyes, bigger than her mother’s, often held the same expression of tentative surprise, and this startled look could produce some uneasiness in the person on whom her eyes were fixed. Although Amy was shy, and seldom fixed her eyes on anyone for long. She was more apt to glance at people quickly before turning her head. In any event, she didn’t know really what kind of impression, if any, she made, even though she had privately in the past studied herself a great deal in any available mirror.

But that summer Amy wasn’t looking into any mirrors. She was avoiding them, in fact. She would have liked to avoid her mother as well, but that was impossible—they were working in the office room together. This summer arrangement had been arrived at months before, by her mother and Avery Clark, and while Amy was told to be grateful for the job, she was not. The job was very dull. She was required to add on an adding machine the last column of numbers of each orange invoice that lay on a stack on her desk, and the only good thing was that sometimes it seemed like her mind went to sleep.

The real problem, of course, was that she and her mother were together all day. To Amy it seemed as though a black line connected them,
nothing bigger than something drawn with a pencil, perhaps, but a line that was always there. Even if one of them left the room, went to the ladies’ room or to the water fountain out in the hall, let’s say, it didn’t matter to the black line; it simply cut through the wall and connected them still. They did the best they could. At least their desks were far apart and didn’t face each other.

Amy sat in a far corner at a desk that faced Fat Bev. This was where Dottie Brown usually sat, but Dottie Brown was home getting over a hysterectomy that summer. Every morning Amy watched as Fat Bev measured out psyllium fiber and shook it vigorously into a pint-sized carton of orange juice. “Lucky you,” Fat Bev said. “Young and healthy and all the rest. I bet you never even think about your bowels.” Amy, embarrassed, would turn her head.

Fat Bev always lit a cigarette as soon as her orange juice was done. Years later a law would be passed preventing her from doing this in the workplace—at which point she would gain another ten pounds and retire—but right now she was still free to suck in hard and exhale slowly, until she stubbed the cigarette out in the glass ashtray and said to Amy, “That did the trick, got the engine started.” She gave Amy a wink as she heaved herself up and hauled her large self off to the bathroom.

Black Water Tales: The Secret Keepers by JeanNicole Rivers
The Dead Season by Donna Ball
Carpe Corpus by Rachel Caine
Thrice upon a Time by James P. Hogan
I Am Your Judge: A Novel by Nele Neuhaus
Cobweb by Margaret Duffy
Island of Legends (The Unwanteds) by Lisa McMann
Show Business by Shashi Tharoor
Henry V as Warlord by Seward, Desmond
Prima Donna at Large by Barbara Paul