Read An Act of Love Online

An Act of Love 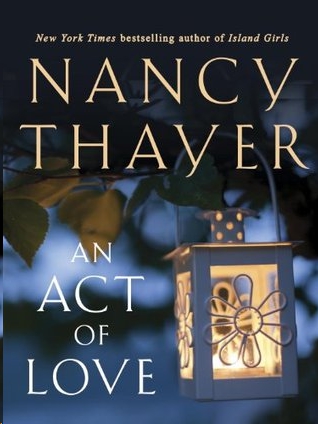 An Act of Love
is a work of fiction. Names, characters, places, and incidents are the products of the author’s imagination or are used fictitiously. Any resemblance to actual events, locales, or persons, living or dead, is entirely coincidental.

BALLANTINE and the HOUSE colophon are registered trademarks of Random House LLC.

Originally published in hardcover by St. Martin’s Press in 1997.

This book contains an excerpt from the forthcoming book
Nantucket Sisters
by Nancy Thayer. This excerpt has been set for this edition only and may not reflect the final content of the forthcoming edition.

A good friend once said, “If you break your arm, people rush to bring you flowers, food, and sympathy, but if your mind breaks even just a little, people run away, frightened and dismayed.”

My desire has always been to write about ordinary families going through ordinary life, and as I’ve grown older, I’ve realized that “normal” life contains extraordinary challenges. Emotional breakdowns happen in the happiest of families. The transformation from child to adult can often be dramatically difficult. I want to write about these things, and about the courage, strength, and resilience that can be discovered in the most “ordinary” of homes. And that is just what I did in
An Act of Love
.

I’m delighted that my early novels are being made available to my readers as ebooks. My style has changed slightly, as the world has grown faster, but my subject, family life, remains as mysterious and fascinating to me now as it was in these early books: falling in love, raising children, friendships and betrayals and forgiveness.

I hope you enjoy these early novels and discover some new friends there.

She was aware
only of murky darkness, a tilting horizon splintered with light, and then all at once Emily surfaced to air and white brilliance, her throat burning. The tube in her mouth and her throat prevented her from speaking, but she moaned from deep in her chest and twisted on the stretcher, struggling to get free.

The glaring emergency room light burned her eyes. Someone had removed her clothes and stuck her into a skimpy cotton hospital gown that scarcely covered her body. She was tubed and wired like a sci-fi creature, from her breast and both arms and her finger and her mouth and her nose and, hideously, from between her legs.

“Let me go,” she insisted, but only garbled sounds came out.

A nurse wearing blue scrubs bent over Emily. She had a pleasant face, a grandmotherly face. The doctor looked pissed. Emily knew he was thinking: stupid bitch. She
was
a stupid bitch, so why wouldn’t they leave her alone and let her die?

The nurse was saying: “You’ll be all right. We’re almost through pumping out your stomach and rinsing it with saline fluid. When it’s clear, we’ll remove the tube.”

Emily thrashed and bucked. With one hand she tried to rip the needle from the vein in her arm, but the nurse gently checked her hand.

“You need that. That IV is carrying necessary fluids to your system. Don’t do that, dear. Those wires are for the heart monitor, and your heart rate’s a little faster than we’d like right now. The tubes in your nose are for oxygen. This is just a blood pressure cuff, you know about that. The thing on your finger that looks like a giant paper clip is a pulse oxymeter … it measures your oxygenation. We’ve put in a Foley catheter so we can collect some urine for tests. Settle down for us now and we’ll be able to disconnect you from most of it.”

In despair, Emily wept. The nurse leaned forward with a tissue and wiped the tears from Emily’s face and the mucus from around the tubes in her nose.

Now thick, ink-black liquid flowed through the tube into Emily’s stomach. “This will bind with your system to absorb any bits of the drugs we didn’t get pumped out of you. You’ll be having a little diarrhea later in the day. Just a few more seconds and we’ll have this tube out.”

Her head hurt hideously. They began removing things. Bending over her, the nurse removed the bits of sticky paper connected to the wires stuck just beneath her clavicle and beneath her left breast. She felt a tug in her crotch when they took out the catheter. As the tube came up her esophagus, Emily involuntarily made retching noises.

The doctor left the room. The nurse bent over the equipment.

Emily threw herself off the bed and bolted for the door. She raced down the hall, aware of cold on her back, on the soles of her feet, toward the exit sign. She was almost there when they caught her and brought her back.

Last night’s storm
had torn away autumn’s wrenching brilliance, and now the forest circling the farm that had for weeks seemed to shimmer with flame was merely a skeletal, ghostly gray. Beneath an overcast sky the pond rippled darkly in the dying wind. But in the field the horses were playful in the bracing air, nipping and teasing each other. Linda found herself leaning on the windowsill, just staring, savoring the sight, while her computer hummed industriously, waiting. She relished these first cold, dreary days of winter when the heart turned toward inner comforts and joys.

Owen appeared in the doorway of her study. “Want to make love?”

Surprised, she laughed. Certainly her husband was compelling, lounging there in his jeans and flannel shirt, short and compact and sturdy, his thick hair gleaming as brightly as spun copper. His pale brown eyes were flecked with gold and amber, like currents of light in his tanned, freckled skin. His hands were massive and hard and sure. As was his body.

“Good. Take the phone off the hook.”

With only a twinge of guilt, Linda lifted the receiver and stuck it into a drawer. It would make disturbing noises for a few seconds, then go mute. Anyone calling would get a busy signal. She switched off her computer, rose, and followed Owen into his bedroom.

After the first year of their marriage, they agreed to have separate bedrooms. Linda was a hopeless insomniac, waking at all hours of the night to read. She never had enough time to read; she often thought she had insomnia just so she could grab an extra hour in the deep heart of the night to spend with books.

While Owen needed solitude. His antidote to the news of the contemporary world was to listen to classical music. The farmhouse was large enough for them to have separate bedrooms, and it added a bit of spice to have different rooms, to enter, as she did now, her husband’s lair.

Owen’s room was dark, with heavy Empire furniture, and his parents’ old mahogany sleigh bed was almost regal. Owen liked the past, liked old things, did not like change. Linda had come to accept this as a good sign; he wouldn’t grow tired of her.

She undressed and slid between the sheets, which were cold and sleek against her skin.

“And the better to see you, my dear,” Owen growled wolfishly, crawling into bed and nuzzling her neck.

Languorously they rolled together, entwining their arms and legs. They had all the time in the world. Their pulses slowed, they took deep breaths, and for a while they didn’t kiss, but only stroked each other, learning once again the warm, smooth span and fold of shoulder, hip, and thigh. Then Linda forced Owen onto his back and knelt between his legs so that she could feel the erotic friction of his wiry red hair against her cheek, eyelids, lips. Turning her head slowly from side to side, she grazed in the long deep bowl of his belly. He ran his hands over her arms and shoulders and back. His penis grew long between her breasts. He was always very clean, with a cool scent like redwood emanating from his skin. Linda felt almost drowsy, drugged, as if browsing among poppies, and then he turned her over and prepared to enter her but withheld himself, making the tension mount. She arched up toward him. The room was full of light and skin and breath. When he finally penetrated her, she wrapped herself around him in a kind of bliss. She was more in love with Owen now than she was when she first met him.

Finally they subsided, curled together, fell into an easy sleep.

Owen woke to
see by his bedside clock that two hours had passed. Within the curve of his body, his wife lay sleeping. Almost impersonally, he noted the crow’s feet at her eyes and the slight incipient sag of flesh around her jawline, and all at once he was stabbed through with sorrow at the realization that she was growing older. He wanted to protect her from age, from death. He wanted his love to be a shield.