Read An Affair of Vengeance Online

An Affair of Vengeance 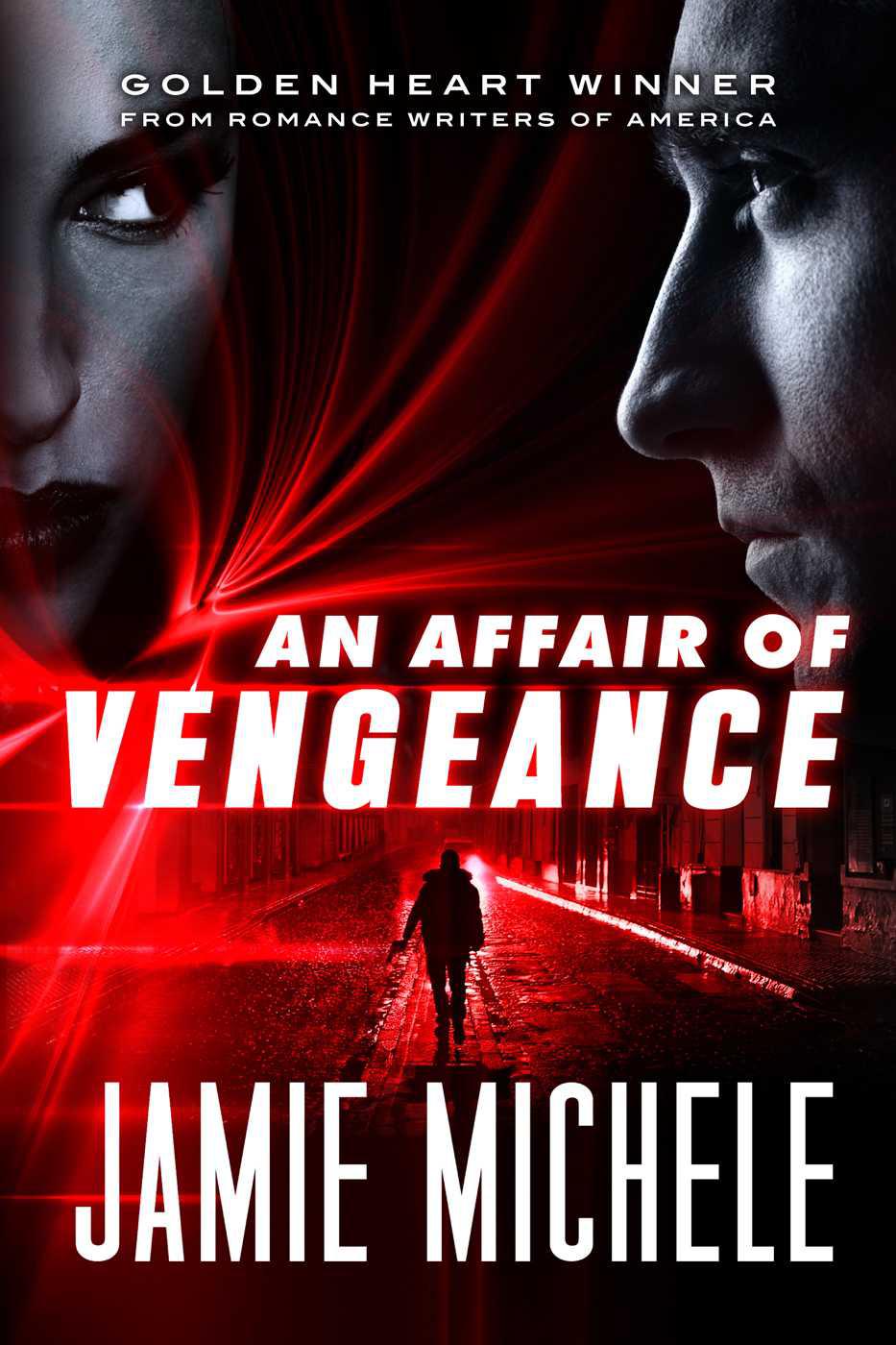 P
ARTITIONED BY INTIMATE
banquettes and long red couches, the cavernous space of the old bank lobby danced with the light of flickering candles. As Evangeline Quill wove her way through the crowd of men in suits and women in short dresses, ambient electronica music mingled with rapid flamenco guitar under a steady stream of conversation and clinking glasses.

She’d just about reached the bar, which was a circular relic set in the center of the room at the site of the old information desk, when she saw two dark-haired men standing stock-still at the back, flanking the entrance to the hallway that led to the private rooms. They weren’t allowing anyone through, which made them one thing:
guards
.

She didn’t alter her route or give the pair a second glance, but every cell in her body was instantly attuned to their presence. She’d seen them around before, although never without a drink in their hands and a woman or two hanging on their arms. They were young cousins of a local gunrunner, a lowlife named Serge Penard whom Langley didn’t give a damn about, as long as his weapons stayed in Europe and didn’t threaten American interests.

But Evangeline cared very much, for Serge Penard had once, after consuming several tumblers of top-shelf Russian vodka, claimed to work for Lukas Kral.

Her direct supervisor had scoffed at the notion, noting that every scumbag with a sack of AKs to sell claimed to have gotten them from Kral.

But when Evangeline heard the name Lukas Kral, she listened closely.

She choked back a growl and sidestepped a gorgeous Russian girl with impossibly globular breasts.

Merely thinking Kral’s name made her fingernails bite half-moons into her palms. A billionaire shipping magnate and close personal friend of the French president, Lukas Kral was an utterly indiscriminate supplier of weapons to anyone with the necessary cash. He was suspected of arming both sides of the Second Congo War, in which nearly five and half million people were killed, as well as every militant outfit in the Middle East. But he also ran humanitarian flights of food and medical aid into war-torn regions on behalf of the United Nations, and gave substantial amounts of cash to the reelection campaigns of the leaders of any nation beginning to get ideas about prosecuting him. His planes moved weaponry into the hands of rebels fighting dictators and fascists where the United States wouldn’t dare intervene—not directly, at least. He was the CIA’s lapdog, or they were his, depending on the day. So while he armed America’s enemies, he also kept its hands clean, and by dealing from both sides of the deck equally well, he protected himself from prosecution. The CIA monitored his activity but did nothing to stop him. Any nation that wanted him gone also needed his help, and so far, no one was willing to risk seeing what the world would look like without him around to arm it.

No one except Evangeline.

Because no one knew better than she what a murderous madman Kral really was.

Like any cornered animal, he struck hard and fast against anyone who dared threaten his existence. Her father had done just that and had paid the price in blood. Before he’d run up against Kral, her father had run a nonproliferation advocacy group and had begun a vocal campaign against the flood of black-market weapons into developing nations. He’d sought to dismantle the ancient smuggling routes between Europe, Asia, and Africa, and had named certain wealthy men who he believed facilitated the illicit networks. Kral had been one of those named—one of many—but Kral was the only one to send her father a cease-and-desist letter that contained barely masked physical threats.

Rather than being frightened into silence, her father had responded to Kral’s threats by holding a press conference in which he’d called Kral the biggest menace to world peace since Hitler. Kral hadn’t taken kindly to the comparison. Just one week after that press conference, her father and mother were dead. An explosion in a crowded French market took them out, along with thirty-two others. Wrong place, wrong time. That’s what the official reports said.

But Evangeline was no fool. Kral had killed her parents, and she intended to make him pay for it.

So when she saw Penard’s guards posted at the back of the hip Marseille club, all she could think was that, finally, that scumbag Serge Penard might lead her to Lukas Kral.

As she slipped past a group of curvy women in animal-print dresses, a short figure flashed on her peripheral vision. It was Stacy, the other American waitress who worked at La Banque de la Chair, exiting the private hallway. The doe-eyed brunette danced around a pat on the butt by one of the guards and headed for the center of the room. Judging from the thin line of her red lips, she was irritated.

Perfect. Evangeline wanted to go back there but needed it to be someone else’s idea. Stacy looked like she could be manipulated into a section switch.

Evangeline angled toward the back of the bar to intercept her. After she called her order to the bartender, she rested an elbow on the smooth-as-glass curved oak slab and pressed her thumb and forefinger against the bridge of her nose, faking a headache.

Stacy arrived a heartbeat later. She asked the bartender to fill an ice water, and then leaned close to Evangeline. “You look awful!”

“Thanks. My head is killing me.” Evangeline massaged her temples and winced. “I think it’s gonna pop off if I have to fill one more order for
pastis.”

“Pastis? Who would come to La Banque and order pastis?” Stacy asked, her mouth pursed in distaste. “Oh, no. God, no! Don’t tell me we’ve been recommended by a guidebook. I don’t think I can handle a plague of backpackers.”

“May the Lord bless us and keep us free from body odor.” Evangeline grinned and thrust her chin toward the public area of the club she’d been tending. “No, I’ve got four tables of American engineers sitting right by the flamenco guitarist. There’s a big conference somewhere in town, and they’re apparently using their per diem to explore Marseille’s finer establishments.”

“Ugh! Well, that’s nice for them, but there’s more to the south of France than pastis. It’s not like I’d go to Germany and drink nothing but beer.”

“Well, me too, but I wouldn’t drink just
one
kind of beer. I’d try them all, you know? I’d mix it up, see what the country has to offer.”

“What do you expect?” Evangeline shrugged. “I love Americans, but sometimes we make me cringe. Yesterday I saw a guy wearing a shirt that said, ‘I shaved my balls for this?’”

“Yup. He was standing by the death camps memorial. I almost died of shame by association.”

“I’d never lie about something as serious as shaved genitalia. So how’s
your
night going?”

“Fine. Quiet. Boring, except for Dumb and Dumber back there trying to pinch my cheeks every time I walk by.” Stacy tossed her head in the direction of Penard’s cousins, still standing like statues by the hallway.

“What are they doing over there, anyway, besides giving you a reason to take a self-defense class?”

Stacy blew her thick brown bangs out of her eyes. “I have no idea. They’re not the ones I’m serving. Jorge stuck me on the back room, and there’s just one guy back there, doing nothing. Keeps sucking down ice water. He’s ridiculously cute and I keep flirting, but he won’t say more than two words to me at a time, so I’m probably screwed for tips.”

Cute? Not Lukas Kral, then. He was in his fifties, which didn’t preclude him being handsome, but she didn’t think Stacy would find him “cute.” Still, somebody interesting was back there. Evangeline wanted to see who he was, and what he was doing drinking water in a club. But she played it cool, merely shrugging. “That sucks. Is he French?”

“No. I think he’s Irish or something. Speaks English, but with an accent. Sort of like an English guy, but not exactly.” Stacy rolled her blue eyes. “Whatever. I don’t care where he’s from. He’s a dick. That’s all I know.”

“Sucks to be you,” Evangeline said with a sympathetic smile, and then lied through her teeth. “Irish guys are stingy as hell.”

Stacy moaned as the bartender slid several cloudy yellow drinks across the bar. Evangeline thanked him and sighed heavily before putting the glasses on her tray and hefting it up on one hand. “Well, I’m off to deliver another round of cliché to the well-paid dork brigade.”

That last bit might have been a tad overplayed, but Stacy hadn’t yet taken the bait. Already thinking of a plan B for getting
into the private rooms, Evangeline gave her a sad smile before turning to leave.

Maybe a plan B wouldn’t be necessary.

Stacy chewed her bottom lip. “Are any of those engineers cute?”

Bonnie Prince Charlie: A Biography by Carolly Erickson
Connecting Rooms by Jayne Ann Krentz
Anne of the Fens by Gretchen Gibbs
The Extraordinary Adventures of Ordinary Boy, Book One: The Hero Revealed by Boniface, William
All Change: Cazalet Chronicles by Elizabeth Jane Howard
A False Proposal by Pam Mingle
Runaway Cowgirl by Cheryl Dragon
A Lily Among Thorns by Rose Lerner
Darling Jenny by Janet Dailey
She Drives Me Crazy by Leslie Kelly