Read An Embarrassment of Riches Online

An Embarrassment of Riches 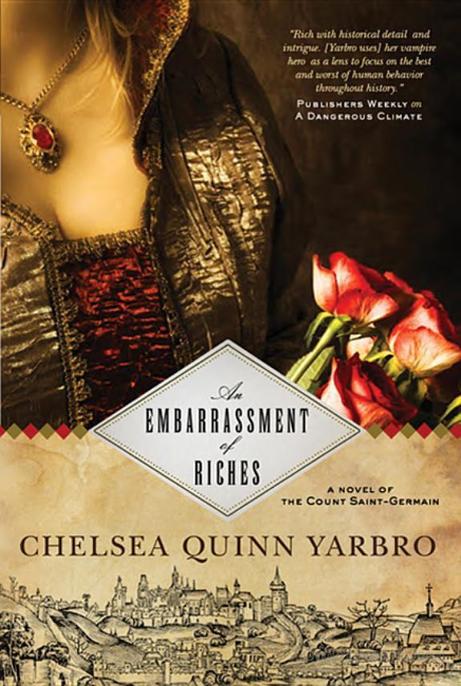 This one is for
S
TEVE
R
AWLINS.

Part I: Rozsa of Borsod

Text of a letter of introduction from Frater Sandor, scribe to Konig Bela of Hungary, to Konig Otakar II of Bohemia and the Counselors of Praha, written in Church Latin on vellum, carried by a royal herald, and delivered thirteen days after it was dispatched.

On the order of Bela, Konig of Hungary, presently established at Buda, I send his greetings to Przemysl Otakar II, Konig of Bohemia, and the Counselors of Praha: at Konig Bela’s pleasure, I present to your notice the following men and women:

Gazsi of Raab and his three sons, Miksa, Adorjan, and Nandor, all silversmiths and Masters within their Guild, who have made jewelry and other prized objects for Konig Bela; they will supply Konig Bela’s granddaughter, your Konig’s Konige, Kunigunde, such items she requests for herself or members of the Konige’s Court, as they have done for our Konig Bela. They will require housing and the support given to members of the Konige’s household.

Tirz Agoston of Mures and his wife, Jolan, and their two youngest children, their son, Imri, and their daughter, Alida. The family has made musical instruments for three generations, and their older sons are presently apprenticed in Mures to their cousin Tirz Lajos; at the completion of their training, they will once again join their parents for their living, thus continuing the honor of the craft. Tirz Agoston will make such instruments as mandolas, gitterns, rebecs, fiddles, and psalteries as may please Konige Kunigunde; Jolan can teach the Konige, and any of her ladies she may select, in the art of playing these instruments. The family will require a house and a workshop near to the Vaclav Castle but will require no support beyond their house and workshop, so long as Tirz Agoston is given permission to make instruments for those outside the Konige’s Court.

Vili of Gran, who is a superb furrier, skilled in every aspect of his art, from skinning to preserving hides and furs, and will, at the pleasure of Konige Kunigunde, fashion such garments and other items as it will delight her to have or to present to members of her Court. He, too, is to have housing and the support of the Konige’s household. His wife and children will remain in Hungary for at least a year, his wife being newly pregnant and unable to travel; she will require at least a year after giving birth before she may safely take to the road with her children, and so will not arrive in Praha for at least two years.

Klotild of Jilish, the widow of Szilard, and her daughter Emese, who is seven years of age. Klotild is widely recognized as an herb-woman and midwife. She has delivered many noble children and has only had four die among more than thirty births. Konig Bela believes that Klotild of Jilish will be able to use her skills to ease his granddaughter’s labor and ensure her a safe delivery. She will also attend the infant through its first year, as a member of the Konige’s household. Her daughter will assist her in her work, and serve as a companion for the Konige’s daughter.

Rakoczy Ferancsi, alchemist, who has the knowledge to make jewels, which he will be honored to concoct for Konige Kunigunde. This man comes from an ancient line of Comesi, as the Latins have it, and is due the rights of his title, that of Santu-Germaniu, a fiefdom at the far eastern edge of Bela’s Kingdom, an ancient holding of his family, the safety of which fief is in his hands. Aside from his abilities to produce jewels, Rakoczy is also familiar with many languages. Being a man of some wealth, he will provide residence and maintenance for himself and his manservant, and employ such household as he may require, without cost to the Konige. He has made arrangements with the Counselors of Praha to purchase a mansion in Praha which he will keep from his own purse. He has also provided his own escort and wagons for the journey to Praha, and provided all funds for such stops as this company of travelers may make along the way. Konig Bela asks that the Comes be restricted to his own mansion, the Konige’s Court, and the public places and buildings of the city, and that he not be allowed to pass beyond the city’s walls; further, Konig Bela relies upon the Konige’s Court to make regular reports on his activities, for he is a figure of great interest to the Konig.

Elek of Buda, master of horse, who will bring ten horses with him to augment the Konige’s stables, all from Royal blood-stock. In addition, he will bring his wife and five children with him, all of whom are to be enrolled in the Konige’s household, as servants of whatever capacities as will please Konige Kunigunde to assign. This man is skilled in all manner of equestrianship, and will not only train the Konige’s horses, but will also train such members of the Konige’s household that she may require, to ride.

Hovarth Pisti of Buda, master tapestry-weaver, and his six apprentices: Fabo, Geza, Andras, Bartal, Jeno, and Tivadar. These artisans are the most accomplished tapestry-weavers in Hungary; they will prepare such tapestries as the Konige shall desire them to weave. Hovarth is the highest member of his Guild, and has been enrolled among the Counselors of Buda to represent all members of his Guild of Tapestry-Weavers. His absence has required him to appoint a deputy, who will fulfill his duties in Buda while Hovarth Pisti remains in Praha in the service of Konige Kunigunde, and a member of her household.

Rozsa of Borsod, Teca of Veszbrem, Gyongyi of Tolna, and Csenge of Somogy to help the Konige’s four other women tend to her in her pregnancy. All four women are from noble families; Rozsa of Borsod is the wife of Notay Tibor of Kaposvar, already in the Court of Otakar II; Csenge of Somogy is the cousin of the Konige’s waiting-woman, Imbolya of Heves. Teca of Veszbrem and Gyongyi of Tolna are high-born widows of distinguished soldiers of noble birth. These four women will remain to wait upon Konige Kunigunde until her second child is three years old, and longer if the Konige gives birth again during that time, for they are charged with assisting in the care of her children as well as of her. They will be kept by the Konige as members of her Court.

In addition, Konig Bela has purchased twenty slaves for Konige Kunigunde’s household, to be employed as she sees fit. Most of the slaves are from the East, and have only a rudimentary knowledge of the Magyar tongue and none at all of the Bohemian one, and so will have to rely upon those knowing Magyar to be in charge of them, or to be assigned tasks that requires little or no instruction and supervision. They have the appropriate brands on them, and they range in age from about ten to about twenty. There are twelve men and eight women. Three of the women are needlewomen capable of simple sewing. One of the men is quite strong and may be used for heavy labor. Konig Bela has clothed them and provided them with round cloaks to spare his granddaughter that expense.

The escort and transportation for this company, led by Padnagy Kalman, Dux of Oradea, consists of ten mounted men-at-arms, five drivers of wagons pulled by mules, ten walking escorts for the wagons, eight walking escorts for four large carts pulled by bullocks, and six small carts pulled by ponies. There are an extra four horses and six mules assigned to this company, in order to ensure that there will be fresh mounts at all times. The slaves will walk to augment the escort, but the others will ride in the wagons except when ordered to leave the wagons by the Dux. In addition, there are two cooks, five grooms, three monks, a priest, a scribe, two couriers, and a physician. All these will return to Hungary with the Dux unless it should please Konige Kunigunde to keep one or more of them to serve her. Since they will be traveling in the two weeks before Easter, it is to be hoped that they will be far safer than they would be during times that battle is permitted and the Peace of God is not in effect. They depart two days following the courier carrying this, and for ten days they will be in God’s Hands. After the 24
th
of March, the escort will have to be more diligent, even on Bohemian roads.

Given Konig Otakar’s encouragement to German settlers in Bohemia, Konig Bela has no doubt that Konig Otakar will extend the same welcome to these Hungarians, for the sake of his Konige and the deep affection that is shared between these two Konigs. It is Konig Bela’s hope that the presence of these excellent Hungarians will bring about an end to the hostilities often expressed to their fellow-countrymen, which would please both Konig Bela and his granddaughter, Konige Kunigunde, both of whom seek an end to border skirmishes.

May God bless and save Konig Otakar, and send him a son this time, and may his line never be extinguished in Bohemia from this day until the Last Judgment.

In Buda on the 12
th
day of March in the 1269
th
Year of Our Lord, at the behest of Konig Bela of Hungary, by the hand of

(the seal and sigil of Konig Bela)

Rakoczy Ferancsi looked around the entry hall of his manse, his only expression a flicker of disappointment in his dark eyes. “Well, we have seen worse; at least they disposed of the rushes; we will have to do something about the rats,” he remarked in Imperial Latin to Hruther, who was three steps behind him, carrying a red-lacquer chest strapped to his shoulders, its legs removed and bound to the body of the chest. The two went through the arched door and into the main hall; at the far end of it was a large fireplace badly in need of sweeping; two benches lay upside down in front of it. “We will need a staff of fifteen at least to manage this place, inside and out.” He swung his black-and-white badger-pelt mantel off his shoulders and draped it over the nearest plank bench, revealing a black bleihaut with Hungarian-style sleeves and long, black-embroidered riding panels in the front of the garment. His Roman braccae were heavy black cotton; his high boots were thick-soled and made of tooled red leather from Aleppo. He wore no jewelry or indication of rank so as not to tempt robbers to stalk him during his travels; his head was bare, revealing dark wavy hair, cut shorter than the current fashion, with a touch of gray at the temples, and just now, his attractive, irregular features were severe. His simplicity of clothing would change when he went to the Konige’s Court to present himself along with the rest of those subjects Konig Bela had sent to his granddaughter, when grandeur would be expected of him on account of his title; richness and variety in dress were required for members of the Konige’s Court, and failure to present a splendid appearance would be regarded as a slight to the Konige.

Fixer-Upper (Spinning Hills Romance 3) by Inés Saint
Who Wants to Marry a Billionaire? by Stone, Emily
Bitter Demons by Sarra Cannon
Paint by Magic by Kathryn Reiss
Starfish and Coffee by Kele Moon
One Way Out: The Inside History of the Allman Brothers Band by Paul, Alan
The Game Changer: A Novel by Sterling, J.
Mrs. Miracle by Debbie Macomber
Bound Obedience (Dark Possessions Book 1) by Nadia Nightside
Twenty Thousand Streets Under the Sky by Patrick Hamilton