Read An Experiment in Love: A Novel Online

An Experiment in Love: A Novel 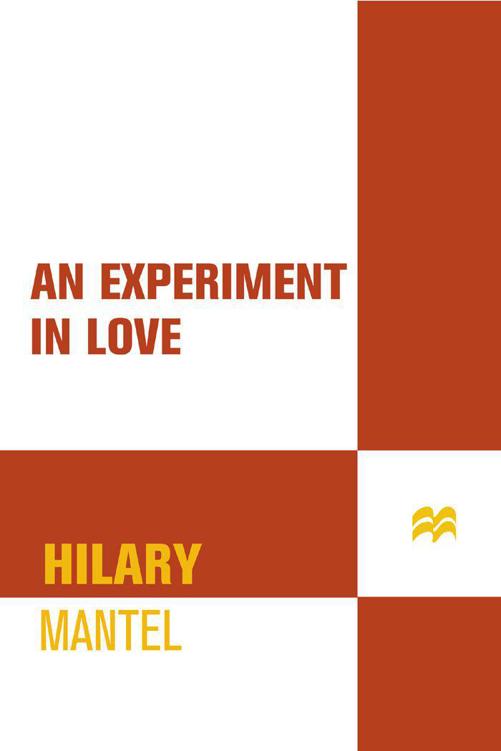 an experiment in love

AN EXPERIMENT IN LOVE
. Copyright © 1995 by Hilary Mantel. All rights reserved. Printed in the United States of America. No part of this book may be used or reproduced in any manner whatsoever without written permission except in the case of brief quotations embodied in critical articles or reviews. For information, address Picador, 175 Fifth Avenue, New York, N.Y. 10010.

Picador
®
is a U.S. registered trademark and is used by Henry Holt
and Company under license from Pan Books Limited.

An experiment in love / Hilary Mantel.

First published in the United States by Henry Holt and Company

A Place of Greater Safety

A Change of Climate

Every Day Is Mother’s Day

Giving Up the Ghost

Among Hilary Mantel’s major novels are
A Change of Climate, A Place of Greater Safety
, and
Eight Months on Ghazzah Street
. She has also written a highly acclaimed memoir,
Giving Up the Ghost
. Winner of the Hawthornden Prize, she reviews books for
The New York Times
and
The New York Review of Books
. She lives in England.

This morning in the newspaper I saw a picture of Julia. She was standing on the threshold of her house in Highgate, where she receives her patients: a tall woman, wrapped in some kind of Indian shawl. There was a blur where her face should be, and yet I noted the confident set of her arms, and I could imagine her expression: professionally watchful, maternal, with that broad cold smile which I have known since I was eleven years old. In the foreground, a skeletal teenaged child tottered towards her, from a limousine parked at the kerb: Miss Linzi Simon, well-loved family entertainer and junior megastar, victim of the Slimmer’s Disease.

Julia’s therapies, the publicity they have received, have made us aware that people at any age may decide to starve. Ladies of eighty-five see out their lives on tea; infants a few hours old turn their head from the bottle and push away the breast. Just as the people of Africa cannot be kept alive by the bags of grain we send them, so our own practitioners of starvation cannot be sustained by bottles and tubes. They must decide on nourishment, they must choose. Unable to cure famine – uninterested, perhaps, for not everyone has large concerns – Julia treats the children of the rich, whose malaise is tractable. No doubt her patients go to her to avoid the grim behaviourists in the private hospitals, where they take away the children’s toothbrushes and hairbrushes and
clothes, and give them back in return for so many calories ingested. In this way, having broken their spirits, they salvage their flesh.

I found myself, this morning, staring so hard at the page that the print seemed to blur; as if somewhere in the fabric of the paper, somewhere in its weave, I might find a thread which would lead me through my life, from where I was then to where I am today. ‘Psychotherapist Julia Lipcott’, said the caption. Ah, still Lipcott, I said to myself. Although, of course, she might have married. As a girl she wouldn’t change her underwear for a man, so I doubt if she’d change her name.

The story beneath the picture said that Miss Simon had been ill for two years. Gossip, really; it’s surprising what the
Telegraph
will print. The megastar’s gaze was open, dazed, fish-like; as if she were being grappled suddenly towards dry land.

It was the year after Chappaquiddick, the year Julia and I first went away from home. All spring I had dreamt about the disaster, and remembered the dreams when I woke: the lung tissue and water, the floating hair and the sucking cold. In London that summer the temperatures shot into the mid-eighties, but at home the weather was as usual: rain most days, misty dawns over our dirty canal and cool damp evenings on the lawns of country pubs where we went with our boyfriends: sex later in the clammy, dewy dark. In June there was an election, and the Tories got in. It wasn’t my fault; I wasn’t old enough to vote.

In July there was a dock strike, and temporary shortages
of fresh food. The Minister of Agriculture appeared on the news and said, ‘What housewives should do this week is shop around, buy those things which are cheaper.’

When my mother heard this, she took off her slipper and threw it at the television set. It sailed over the top and landed at the back among the tangled flexes and cables. ‘What does he think folk generally do?’ she asked. ‘Go down to the market and say, “What’s dear today, give me two pounds, will you, and a slice of your best caviare on top? Oh, no, that’s not dear enough! Please keep the change.” ’

My father creaked out of his chair and went to pick her slipper up. He handed it back: ‘Prince Charming,’ he said, identifying himself.

My mother snorted, and forced her veiny foot back into the felt.

As soon as my exam results came through I started packing. I didn’t have many clothes, and those I did lacked the fashionable fringes and mosaic patterns. The papers said that purple would be the dominant shade of the autumn. I was old enough to remember when it had been fashionable last time: how jaundiced it made women look, and how embarrassing it was for them when the craze fizzled out and they had its relics crowding their wardrobes. The colour’s just a rag-trade manipulation, because apart from prelates nobody would naturally choose it. Women have been caught too often; that’s why we don’t have purple now. Except, of course, purple prose.

Quick, before I forget it . . . the dazzle of the lights on the white tiles, the dismal moans and clatters from the darkness, less like trains than the calls of departing ships; the voice of the announcer over the tannoy. I took out of my pocket a map, folded to the right square, and looked at it as I had done many times on the journey; my heart lurched a little, and small fires of apprehension ran behind my ribs, little flames leaping along the bones. I was a child, and I had been nowhere until now.

I picked up my suitcase, which was dragging my arm out of its socket, and began to lurch forward with it through the early evening; crisp leaves were falling already in the London squares.

When I arrived at the Hall of Residence, a woman – the warden herself – took me upstairs in a lift. She had a bunch of keys. ‘If you had left that’ (she meant my suitcase)
‘there’
(she said, with a mysterious, impatient gesture) ‘then the porter would have brought it up for you.’ As things were, she had to keep her finger on the
OPEN
button while I manoeuvred it out of the lift. I had to trail along behind her, dragging the suitcase like a deformed limb.

My room was to be on the third floor, known as C Floor. The woman led me along a wide corridor, parquet squeaking under her feet. She stopped by a door marked C3, rattled her bunch of keys and admitted us. Inside the door she consulted her list. ‘Mac, mac, mac,’ she said. ‘Miss McBain.’ There, pinned to her sheet before she flicked it over, I caught a glimpse of a photograph, the black-and-white photograph that the hall had requested.
My mother had taken it in our backyard: I leant against red brick, like a person waiting for a firing squad. Perhaps my mother had never used a camera before. It had been a clear day, but in the photograph my features were wreathed in mist; my expression was shocked.

‘So,’ the woman said, ‘you were at day school in, let me see, Lancashire?’ That was true. I was listed somewhere, tabulated, in the heart of this great dark building. At a turn in the corridor I had smelt soup. Lights blossomed out in another building across the street.

The woman flicked over her lists again. ‘And there are two of your schoolmates coming along, is that correct, Miss Julianne Lipcott and – ’ She squinted at the paper, turning it slightly from the light as if that would remove some of the czs and the djs that rustled and shuffled in proximity, in a surname that I had known since I was four, and which was therefore no stranger to me than Smith or Jones – less, really. I pronounced it for her and said helpfully, ‘We call her Karina.’

‘Yes, I see. But which of you will share? We don’t have rooms for three girls.’

Dormitories, those would be. I tried to imagine us in a row in white beds, Carmel and Karina and Julianne: our hands folded in prayer.

‘Since you’re here first you’d better decide,’ the warden said. ‘Whoever is left will be found another partner.’ She raised an eyebrow. ‘Perhaps you’d rather that be you? Perhaps you don’t want to share with either of them?’

How did I dare? It was not so much that I wanted Julianne’s company, or thought that she might want mine. She would be indifferent to it; if you’d asked her who she’d like for a room-mate, she’d have said, ‘Have you got any men?’ But what would she say if through my neglect or failure of nerve she found herself waking up every day in the same room as Karina?

The warden stepped over my suitcase, crossed the room and drew the curtains. They were grey curtains, with a darker grey stripe, matching the covers of the two single beds that stood foot to foot along one wall. She smiled at me, indicating the room, its wardrobe, washbasin, two desks, two chairs. ‘You’ll have first choice then, won’t you?’ She put into my hand a key; attached to it was a big wooden fob, with ‘C
3
’ written on it. ‘You’ll find it best to lock your door when you leave your room. Hand your key in at the front desk when you leave the building.’ She put her lists down on a desk, tapped them together and secured them with a snapping bulldog clip. ‘May I take this opportunity, Miss McBain, to wish you every success in your university career? If you have any problems, queries, do come to see me – at some mutually agreed hour, of course.’ The warden went out, closing the door quietly and leaving me to my life.

Hitched by Ruthie Knox
Testament by Katie Ashley
Meghan's Wish (Love and Danger) by Gamet, Amy
Low by Anna Quon
In the Heart of the Canyon by Elisabeth Hyde
Too Rich for a Bride by Mona Hodgson
59 Minutes by Gordon Brown
Shev by Tracey Devlyn
Country Wives by Rebecca Shaw
Masqueraders by Georgette Heyer