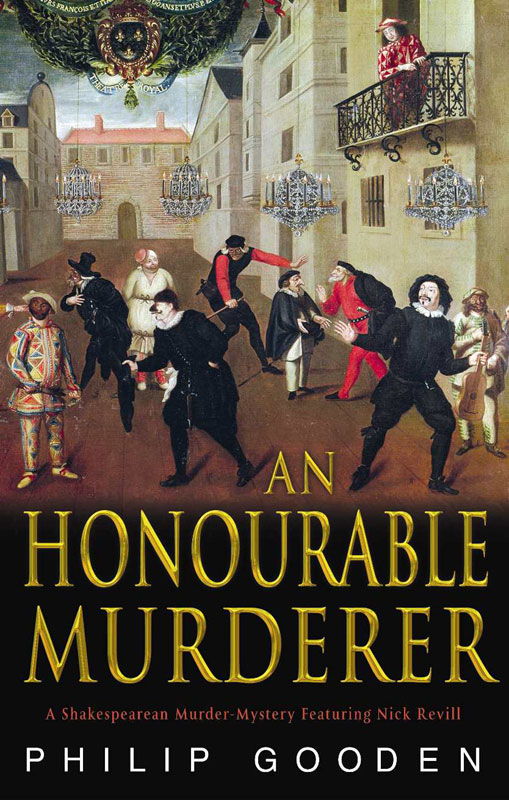 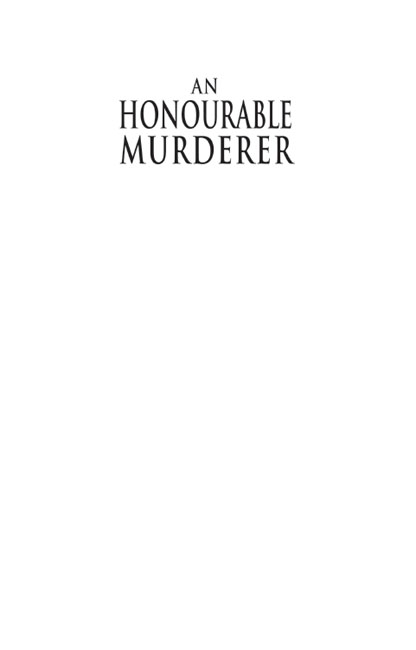 Other titles by the same author 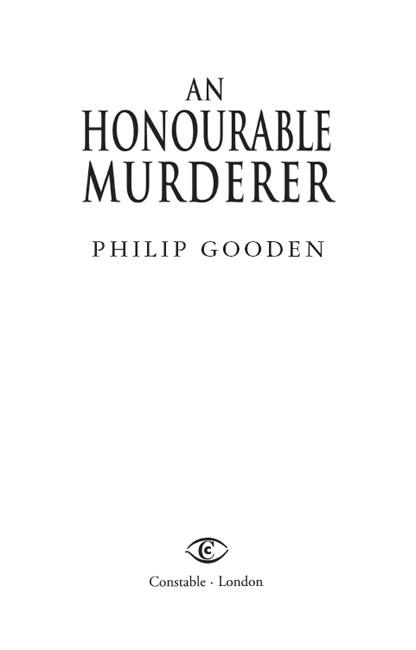 First published by Constable, an imprint of Constable & Robinson Ltd 2005

The right of Philip Gooden to be identified as the author of this work has been asserted by him in accordance with the Copyright, Designs and Patents Act, 1988

An honourable murderer, if you will

T
he August sun glittered on the water. The boats jostled each other in the swell as though, like the spectators, they were trying to position themselves for a better view. The river smelled as bad as it usually did in the late summer but I don't suppose any of us were more than occasionally aware of the stench. We were too busy watching out for the enemy.

Both sides of the river were solid with craft, bobbing in expectation. Ferries and wherries overshadowed little sculls and skiffs. There were herring buses and eel boats, temporarily diverted from the fish trade. There were primitive vessels which looked to have been made out of logs and kept afloat by bladders, and which I personally wouldn't have boarded even to see the arrival of the Queen of Sheba. All of these craft were stuffed with goggling Londoners.

We were moored on the south bank of the river between the Globe playhouse and Molestrand Dock. And we â the King's Men â were in something of a privileged position because we were standing on the deck of our very own barge. Dick Burbage and the other senior shareholders in the Globe had splashed out a hundred shillings a year on hiring a big boat. This vessel was moored near to the playhouse and was used to ferry us to important places on the other side of the water such as Whitehall Palace and Somerset House, so that we should arrive in style.

Our boat was painted with the image of the Company symbol which stands on top of the thatched roof of the theatre â it's a figure depicting Hercules the strong man holding up the globe â so that everyone could see who we were and where we came from. Sometimes we advertised our forthcoming productions with banners draped over the sides.

But on this glaring August afternoon no one was looking at us. All eyes were directed towards the middle of the river where a fleet of bedecked barges was making its way upstream to the beating of drums and the tootling of trumpets. The painted oars caught the sun as they cleared the water in unison and threw out a curtain of sparkling spray with each stroke. Church bells rang out from both shores.

“Oh, look at the Dons!” said Mrs Burbage. “Look how many of them there are.”

For this special occasion some of the women had been invited on board the
Hercules
, as the Globe barge was called. Dick Burbage's wife tried to sound careless enough but there was an undertone of something else in her voice, a note between fear and admiration perhaps.

“It's a proper armada,” said her husband, and there was a bit of laughter from the older members of the Company, the ones whose memories stretched back that far.

I'd barely been into my teens when the Spanish had last attempted to make a landing in England. It was during the summer of '88 in the previous century. Of course the news did not reach our little Somerset village for many days, not until it was all finished with and (had we but known it) we were safe and sound. But by God's grace â and with a little help from the stormy weather and the fighting prowess of our sailors â that great fleet of foreigners had been scattered in all directions. We'd tweaked the King of Spain's beard, we'd given him a bloody nose, I remember my father saying. That was immediately before he sank to his knees in thankful prayer.

I was more surprised at my dad's jubilation and his language than I was at the defeat of the Spanish since I'd been too young or simply too ignorant to understand the danger we were in. Maybe I only began to appreciate the threat properly after the church bells were ringing out and our neighbours were dancing and drinking on the village green by the pond. My father used the Spanish defeat as material for the first of several fiery sermons.

But whatever my youthful ignorance, if it hadn't been for the grace of God, if it hadn't been for the weather et cetera, we English might have been very used to this vision by now. That is, the vision of a grand procession of boats floating on
our
river Thames and containing the flower of the Spanish nobility. Might have been so used to it that we'd scarcely have looked at it twice. Instead, we would all have been trying to wrap our tongues around Spanish vowels at this moment, in submission to an all-conquering power.

As it was, we were viewing the people whom Mrs Burbage had called the âDons' as guests, as honoured visitors to London. They came in peace. There was no reason to feel fear. Even so, I shivered slightly. Perhaps it was the breeze which had suddenly sprung up and which broke the light on the water into ten thousand fragments of silver.

“A long time ago I fought those people,” said Abel Glaze.

“And now they are to be welcomed,” said Jack Wilson.

“Welcomed with open arms rather than with unsheathed weapons,” said Laurence Savage.

My friends were standing next to me by the railing and gazing across the water. Even before the Armada and its defeat, Abel Glaze had taken part in the Netherlands campaign against the Spanish. He too had scarcely been into his teens. But during the period when I was ignorant of pretty well everything outside the boundaries of my father's Somerset parish, Abel was fighting for his life and watching others lose theirs over the sea. Jack Wilson was a bit older and had been a member of the King's Men for longer. In fact I'd obtained my first foothold in the Company by filling in for him during a temporary absence. Laurence Savage, an amiable fellow with a cowlick of dark hair topping his round face, had run away from his unhappy home and joined the Company years earlier.

“The enemy,” I said, for the sake of saying something.

“Yes,” said Abel. “But the cold was the real enemy in the Low Countries, the cold and the shortages. General Frost and Sergeant Hunger killed many more of us than
they
ever did.”

We had a fair view of
them
now. The
Hercules
was a large boat, suitable for the King's Men, and it raised us a couple of feet higher than the nearest craft on the river. We were able to see Spanish gentlemen â and some Spanish ladies too â sitting or standing on the grand barges. From this distance they looked little different from an equivalent helping of our royal court. Finely dressed, naturally, and with an arrogant tilt to their postures. You might even have called them insolent.

I wondered whether the Spaniards were as curious to see us as we were to see them. Probably not. If you're high-up you are used to being gawped at rather than doing the gawping. A few Londoners were waving their hands in a tentative way but there were no answering waves from the foreigners.

“Nine â ten â eleven boats . . . I can see so far . . . and there are more of them coming,” said Jack, squinting into the sundazzle downstream. “How long will this line stretch out?”

“Till the crack of doom,” said a voice behind us.

It was William Shakespeare. We turned to see our shareholder, playwright and occasional actor standing at our shoulders. There was an intent expression in his face. Even WS â the friend of the high and mighty, a man at home with kings and queens (on and off the stage) â was impressed by this floating procession, it seemed to me.

“We shall look dowdy by comparison, Will,” said Laurence Savage. “Are we getting new livery? Have you asked Secretary Cecil for new livery?”

“He's probably got more important matters in hand at the moment, but you could ask him yourself,” said WS, jerking his thumb at a barge which was moored fifty yards or so upstream. It was the largest boat on this side of the river and, strangely, it carried no identifying marks. From our position we were unable to see the interior, which was lavishly curtained off.

“Cecil is over there?” said Jack.

“Not only him but the Lord High Admiral, I believe â oh, and the Queen.”

WS enjoyed the little ripple which this information caused among those standing nearest.

“Do you think we're the only people to feel anything as vulgar as curiosity about our new friends?” he went on. “Or that no one else has wondered whether the Spaniard will arrive with horns on his head and belching hell-fire? The King may have to stay in Whitehall and wait for the grandees to come to him, but that doesn't mean his wife must do the same. If she wants to watch the Spaniards arrive from the privacy of her own river-boat then she will.”

“Queen Anne goes her own way,” said Jack Wilson, throwing in his own bit of insider knowledge.

This was true as far as I was aware (which wasn't very far at all). After countless years of being governed by a single woman who had no consort, it was odd to find ourselves being ruled over by a King
and
a Queen. Odd also that the English were now governed by a couple neither of whom was English by origin. James of Scotland kept his state in Whitehall Palace while Anne of Denmark kept hers a full mile to the east in Somerset House. They were separate in many things â for example, we Globe players were the King's Men, while the Queen bestowed her theatre patronage on the Earl of Worcester's Men. But the royal pair had come together on at least three occasions during their marriage and produced two princes and a princess.

“Maybe Anne's got nowhere to stay except on that boat,” I said.

The Queen had voluntarily given up her residence on the banks of the Thames when the Spanish ambassador had chosen it as the only place in town splendid enough to accommodate his country's envoys while they were staying in London. It really was a voluntary move. In some quarters, Anne was whispered as being of the Spanish party.

“She is back in Whitehall Palace for the time being,” said Shakespeare.

“And back in the King's bed?” said Abel.

“She'll have to kick Pembroke out first, it is rumoured,” said Jack.

Fire from the Rock by Sharon Draper
Storm of Prophecy: Book 1, Dark Awakening by Von Werner, Michael, Felix Diroma
A Family Affair: The Wish: Truth in Lies, Book 9 by Campisi, Mary
Back in Service by Rosanna Challis
The Maestro (Cold Hollow Mysteries Book 3) by Emilie J. Howard
Such A Long Journey by Rohinton Mistry
A Beautiful Wreck (Second Chance #3) by CeeCee James
El Séptimo Sello by José Rodrigues Dos Santos
Over on the Dry Side by Louis L'Amour
Sandra Madden by The Forbidden Bride