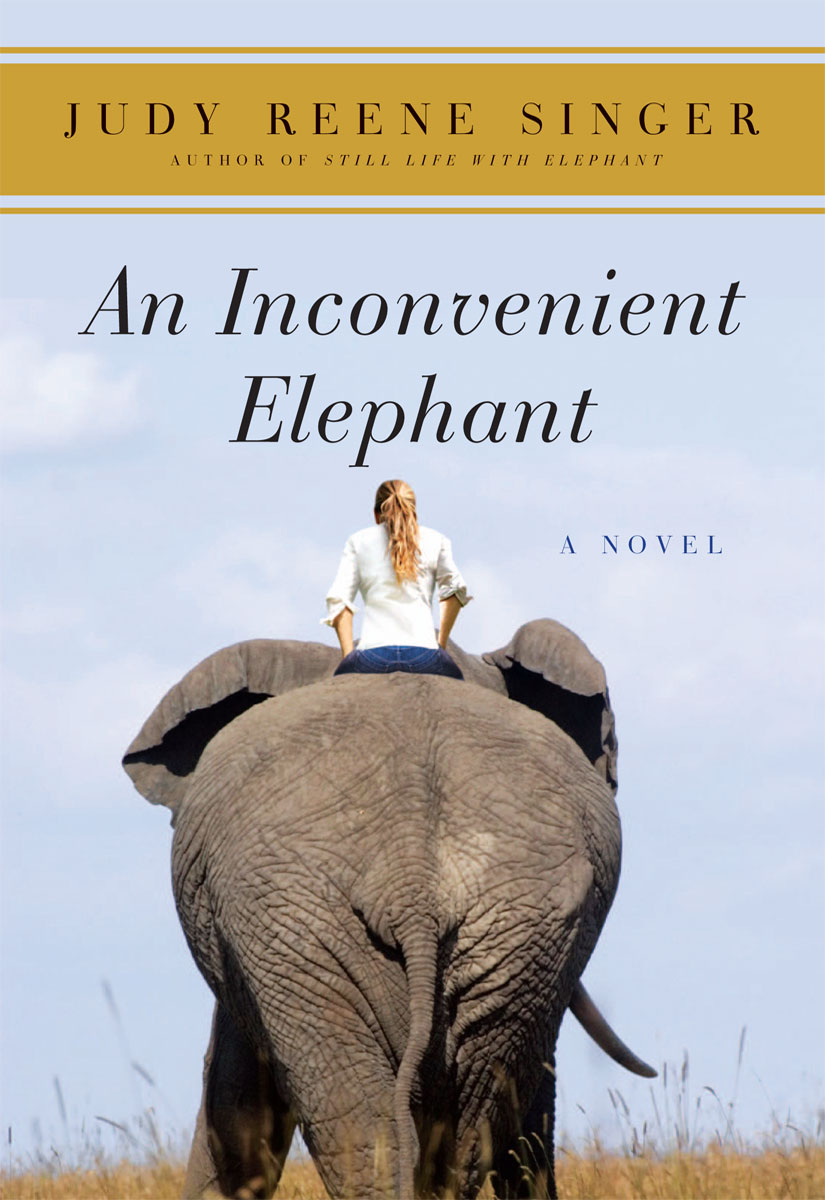 To all those little creatures that inhabit my office with me
and, by virtue of their unremitting cuteness, make it
impossible for me to concentrate on my work.

My little red French poodles, Lola and Flash Gordon; the
twin-zues, two little shih tzus named Mimsie and Sadie;
my two African Grays, Zodiac and Tallulah; and my salty-
mouth cockatoo, Samantha. I love you all.

WHEN YOU SPEND A YEAR LIVING IN THE AFRICAN bushâ¦

THIS COULD BE THE BIGGEST MISTAKE OF MY LIFE, Iâ¦

“WHEN IS THE BUS LEAVING FOR CHARARA?” I ASKED aâ¦

DIAMOND WAS SITTING AT THE LITTLE TABLE OUTSIDE our hutâ¦

MORNING CAME UPON US LIKE A GOOD FRIEND, comforting andâ¦

IT IS A HEARTBREAKING SKY THAT FALLS OVER AFRICA whenâ¦

GRISHA'S PLAN WAS SO LUDICROUSLY SIMPLE, SO laughably naive thatâ¦

MY BRAIN WAS COOKING. I COULD SWEAR I COULD hearâ¦

TOM NEVER MADE IT.

JOSHUA MUKOMANA HELD THE UNWIELDY TITLE OF Minister of Environment,â¦

WE WERE FINALLY GOING HOME. I DIDN'T REALLY believe itâ¦

DIAMOND-ROSE HAD BEER FOR BREAKFAST.

SOMETIMES YOU CAN GO HOME AGAIN.

IT WASN'T REALLY THAT COLD. ESPECIALLY NOT FOR a Newâ¦

WHEN I WAS A CHILD, I THOUGHT I WOULD GROWâ¦

“WE'RE GOING TO RUN OUT OF TIME,” DIAMOND WAS saying.

“HOW DO YOU PAY A FOR AN ELEPHANT?” IT WASâ¦

DIAMOND-ROSE AND I GOT HOME LATE FROM MY parents' dinnerâ¦

“MAHUMBA NI TOMBO,” DIAMOND SAID AS I DROVE us home.

I WASN'T SURE IF THE FULL MOON WAS ALIGNING withâ¦

IT TOOK DIAMOND ABOUT TWO DAYS TO FIGURE OUT whatâ¦

“IT'S A SCAM,” RICHIE SAID. I HAD CALLED HIM INâ¦

I HAVE BEEN IN MANY SITUATIONS IN WHICH I ferventlyâ¦

HOW MUCH SHOULD YOU CHARGE FOR A LIFE when it'sâ¦

SOMETIMES FATE MAKES A MISTAKE BECAUSE NO one was listening.

SHE HAD A TATTOO, THE DARK BAY MARE, WHICH meantâ¦

“HE WHO WANTS WHAT IS UNDER THE BED, MUST bendâ¦

I SAT WITH THE PHONE CRADLED IN MY LAP.

OUR FIRST HORSE RESCUE APPEARED TO BE A SUCCESS.

THE PURPOSE OF A PARTY IS TO BRING PEOPLE together.

THERE WAS A SILHOUETTE OF A MAN JUST AHEAD OFâ¦

FOR ONE AGONIZING MOMENT, I THOUGHT I HAD been caughtâ¦

MY LIFE WAS BEGINNING TO RESEMBLE A PAINTING by Escher.

THE DAY AFTER THE ELEPHANTS LEFT, A SET OF constructionâ¦

WEARING HER PITH HELMET AND HER RED WELLIES, and clutchingâ¦

EINSTEIN'S THEORY OF RELATIVITY WAS PROBABLY not meant to beâ¦

MY HOUSE WAS WAITING FOR US. AND IT WAS WITHâ¦

MRS. WYCLIFF WAS QUICKLY CREMATED AND PLACED in a lovely silver-and-maroonâ¦

I LAUGHED FOR TEN WHOLE MINUTES.

NOT REALLY RUSSIANS, MORE LIKE RUSSIAN ACCOMPLICES, but it wasâ¦

WELL, THE CHAMPAGNE WAS GOOD.

“IT IS TUSKER,” I ANNOUNCED AS SOON AS WE GOTâ¦

SOMETIMES THE WORLD BECOMES MORE THAN A SUM of itsâ¦

SHAMWARI WAS IN NO HURRY. HE RAISED HIS TRUNK andâ¦

OF COURSE, MY MOTHER MADE THE WEDDING CAKE.

Other Books by Judy Reene Singer

WHEN YOU SPEND A YEAR LIVING IN THE AFRICAN
bush with baby elephants, you forget your table manners. Though I wasn't exactly trumpeting through my nose in the restaurant, I suddenly realized I was bolting my dinner and hovering over my plate in a protective hunch, habits I had gotten into so that greedy little trunks didn't pull the food out from underneath me. I thought I might have licked my fingers. More than once. And I might have wiped my mouth on my sleeve. At least I hoped the sleeve belonged to me and not to the new friend I had made, Diamond-Rose Tremaine. Although, truth to tell, Diamond probably wouldn't have cared.

We both had to leave Kenya very quickly. When bullet holes adorn the fine linens in your sleeping bag, it is time to move on. Kenya had fallen into political chaos, and for personal safety, the owner of the sanctuary where I was working
immediately ordered me to book a flight home to New York. I did, with great reluctance. I had given up everything to work with the ellies, and having to say good-bye was breaking my heart. I would have stayed with them forever.

“I'm Diamond-Rose Tremaine,” she said just as we finally boarded. She was very tall and slim, with wild-curled chestnut hair and sea green eyes, and wearing rumpled safari clothesâtan shorts and matching shirt and heavy brown boots caked in mud.

I glanced at her and smoothed back my hair and surreptitiously rubbed my boots on the back of my pants leg, then wondered why, at a time like this, I was thinking how my mother would have disapproved of the way I looked.

“I guess we'll be traveling together,” Diamond said. “Spent twenty years here in Kenya, but I originally come from New York, so I guess I'm going home.”

“Neelie Sterling.” I offered my hand. “I'm from New York, too. I just left the Pontwynne Elephant Rescue. Twenty years! What were you doing so long in Kenya?”

“I owned WildTours Horseback Safaris,” Diamond returned. “Everything went to hell because of the election. Had my horse shot out from underneath me.” She sighed. “I think they ate him.”

“That would put a crimp in business.”

Before long, we were racing through the streets of Nairobi, the minibus practically doing cartwheels as it screeched around the corners of a city under assault. I sat nervously and watched the turmoil through the bus window. My year in Kenya had been filled with the tranquil care of baby elephants, and the upheaval around me was alarming. I hoped we wouldn't get delayed by “the jam,” the dense, balled-up traffic that hit twice a day and offered up several nervous prayers that we would make it to Jomo Kenyatta Airport without absorbing a round of ammo.

She waved a hand. “I've seen it all,” she said. “Tribal wars, hungry lions, charging rhinos, droughts, floods, and lightning storms that split trees apart right over your head.” She plumped up the rucksack perched in her lap and enfolded her head in her arms. “It all eventually settles down,” she said, yawning, and promptly fell asleep.

A crackle of gunfire ominously grazed the rear fenders. Huge rocks, lobbed by mobs of angry Kenyans, bounced off the windshield as the driver, in an effort to avoid them, crunched over broken glass and wove in and out of burning fruit stands, executing a series of maneuvers I thought possible only of movie stunt drivers. The passengers outside on the running boards clung precariously to the top rails, chickens tucked possessively under their arms, faces covered with newspaper in the naive belief it would protect them, and screamed, “
Songasonga mathe, songasonga mathe
,” which meant “Move it, mama, move it!”

The bus tore on, its yellow dome light blinking furiously, the new plasma screen in front ludicrously flashing a hip-hop video whose beat emphasized the ruts in the road. All the while the driver loudly reassured us, “We are secure,
sijambo
,
sijambo
, everything good.” But we knew everything wasn't goodâthe entire country was in crisis, the city was rupturing, everywhere was turmoil and fury.

Something chunked against a window, and there was a noisy confusion. I screamed and jumped from my seat. Diamond lifted her head and slowly blinked awake.

“They're shooting at us!” I yelled.

“Are you sure?” she asked sleepily.

“No,” I had to admit, but another thunk convinced us both, and we immediately ducked under our seat.

“Keep your head down,” she shouted directly into my ear. “Sorry I'm taking up so much room, I have legs like a giraffe. But keep
down
!”

“I'm trying,” I yelled back, compressing myself into a ball in an effort to accommodate her long frame.

Squealing tires protested another sharp turn. Rioting crowds outside lobbed fruit and garbage at the bus. A large orange splatted against the window across the aisle.

“What a waste of fruit!” Diamond-Rose gestured to the juice dripping down the glass. “Oranges should be floating in a pitcher of sangria.”

The bus veered sideways and we tumbled together, grabbing each other for support.

“Well, pour one for me,” I shouted as the bus spun off
the main road and bounced down a backstreet into sudden eerie quiet.

“Ladies and gentlemen, you can sit again normally, please, please,” the driver announced. “This street is secure.
Sijambo
.”

Diamond peeked out from under her seat. “Well, I believe him.” She stood up and stretched, then bent down to offer me a helping hand.

But I was unconvinced. “Never trust anything in Nairobi. You know what the locals call itâNairobbery!”

“Suit yourself,” I said. “I'm not coming out until we get to the airport and pull up right next to the plane.”

A bullet shattered the window behind us, and Diamond dropped to her knees next to me.

“I guess I'll wait down here,” she conceded. “Just in case they shoot the bus out from underneath me.”

We got to the airport safely, only to be told that none of the planes had vacancies. At least none of the planes going to New York. Or London or any other place outside of Africa. Every seat on every plane was taken, every flight filled by nervous tourists or businesspeople, all with the same intent. To get out of Kenya alive and as quickly as possible.

Our seats had been given away. Not unusual, said Diamond. Someone had come along before us and bid more money.

“But we had
reservations
,” I tried to explain to the indifferent woman behind the desk. She was sipping tea and reading a movie magazine.

“But you did not come earlier,” she explained with a shrug, peering over the top of the page and reverting to the usual charming but sometimes infuriating African logic. “You should come here first thing. Now it's first come, first go.”

“That's not how reservations are supposed to work,” I began, but Diamond tugged at my arm.

“Forget it,” she said. “You won't win.” She pulled her cell phone from her pocket and stepped away for a moment to enter into a spirited conversation with someone, then returned. “I'm good at fixing things. Let me speak to the reservation clerk.”

“Oh, that would be terrific,” I said, gratefully letting her take my place at the desk, while I moved a few feet away to a Coke machine to buy something to drink. It was empty but took my money anyway.

Diamond-Rose spoke to the woman at some length. There was much nodding and gesticulating while I watched the population in the airport reach critical mass. Every bus that arrived brought another crowd of people pushing, demanding, looking for a fast way out of danger, and I wondered what Diamond-Rose could possibly accomplish.

After a few minutes, she returned to my side, waving tickets.

She gave me a baleful look. “The problem is that we have to leave Kenya straightaway, yes?”

“And so we go where there is available space.”

“But there's available space in Zimbabwe only because it's
worse
than Kenya,” I said. “No one wants to go to Zimbabwe.”

“Very true,” Diamond agreed. “But we do get out of Nairobi. Problem solved.” She picked up her rucksack and started walking rapidly toward the terminal.

“But that only gives us another problem,” I said, grabbing my suitcase and running after her. “What are we going to do in Zimbabwe?”

She flashed me a beatific smile over her shoulder. “I'll work on that problem after we get there.”

101 Letters to a Prime Minister by Yann Martel
The Girls of No Return by Erin Saldin
The Twiceborn Queen (The Proving Book 2) by Finlayson, Marina
B0047Y0FJ6 EBOK by Rhodes-Pitts, Sharifa
Uptown Thief by Aya De León
Rumpole and the Penge Bungalow Murders by John Mortimer
Son of a Mermaid by Katie O'Sullivan
Christmas Gift for Rose (9780310336822) by Zondervan Publishing House
Savory Deceits by Heart, Skye
Black House by Stephen King