Read An Ordinary Drowning, Book One of The Mermaid's Pendant Online

An Ordinary Drowning, Book One of The Mermaid's Pendant 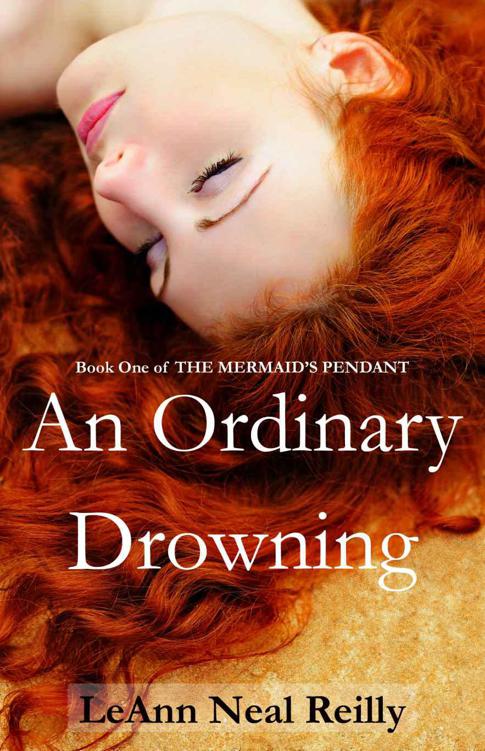 All
rights reserved. Except as permitted under the U.S. Copyright Act of 1976, no part
of this publication may be reproduced, distributed, or transmitted in any form
or by any means, or stored in a database or retrieval system, without the prior
written permission of the publisher, except by a reviewer who may quote brief
passages in a review.

First
published in the United States by Zephon Books in 2012.

AN
ORDINARY DROWNING was originally published as Volume One in The Mermaid’s
Pendant. The characters and events portrayed in this book are fictitious. Any
similarity to real persons, living or dead, is coincidental and not intended by
the author.

To Laurie, Amy, Raffaella, and Nancy

For never doubting me

The whole world has now
been so ransacked that there is little room in these times for the imagination
to play; but in mediaeval days travelers brought back such wonderful stories,
some of them true, and others, perhaps, a little wanting in that respect, of
the things that they had seen, that almost anything seemed a possibility.

It took two hours and ten
minutes
for John
Wilkerson’s fantasy about escaping to paradise to evaporate in the dry
Caribbean air. Two hours on a ferry and a short walk around Culebra, a small
island off the east coast of Puerto Rico, and John had to face up to the truth.
But then, it was his own fault. He should have known that any island that
resembled Disney’s Neverland from an aerial photo must, at ground level, have
more than a few flaws. He should have known not to invent something too
fantastic to believe.

Unfortunately,
he’d spent months conjuring up images of Culebra, known as the Last Spanish
Virgin. Months invested in visions of dark-haired, buxom wenches with castanets
on their slender hands and tiers of flounces swirling around their ankles. For
weeks before he left Pittsburgh, he heard Spanish guitars thrumming and waves
rushing when he drifted off to sleep at night, his girlfriend Zoë coiled around
his body. Once or twice he even saw the sheen on the forehead of an
hacienda
owner in his mind’s eye. When he and Zoë went to the Squirrel Cage after their
day’s research at Carnegie Mellon, he now drank rum instead of Yuengling’s. And
every now and then he caught the delicate scent of frangipani entwined with the
mineral intensity of saltwater. He always darted a glance at Zoë whenever he
remembered the scent of frangipani. His first love in high school, a bubbly
artist named Tilda, had worn frangipani.

These
visions stayed with him until he got to Puerto Rico. Instead of chartering a
flight to Culebra from San Juan, John spent two bucks on the sleek
double-decker ferry from Fajardo. When he arrived at the ferry dock, he found
dozens of beachgoers lounging on hard-plastic coolers, holding beach towels and
floats, and chatting with more energy than he had at eight a.m. Many drank
Medalla or Bud Light, already getting a start on their beach weekend. He heard
a toddler’s cries and witnessed a mother in tube top and shorts, her thighs
pockmarked with cellulite and a bandana around the curlers in her hair, shush
the child. John’s images of an island paradise wavered a bit but still held.

For the first hour on the ferry,
he saw nothing but a steely smudge along the eastern horizon where Culebra
should be. There wasn’t much to do except listen to a CD of Van Morrison and
watch the Caribbean, but then his batteries ran dry and he discovered that he
hadn’t packed replacements. Dropping the CD player in disgust, he ignored the
smells of fried food and the rapid flow of Spanish around him. As he leaned
over the ferry’s railing on the upper deck, John studied the pixelated surface
of the ocean, surprised at how much it resembled a poorly compressed movie.
Choppy shades of blue, gray, and white jerked and resolved into water and foam
and then fractured again into blocks of color. He blinked, rubbed his eyes and
lifted his gaze to the horizon.

The
steely smudge lingered and without landmarks to confirm the ferry’s passage,
John’s mind played tricks on him. The constant sounds of wind and rushing water
convinced him that the ferry labored on a watery treadmill—one which he feared
would break down any moment like the taxi he took to the dock—but gradually he
discerned the smudge growing and clarifying into a mountainous outcropping of
sere green and dusty brown. Except for a smattering of white structures along
the northern shoreline, Culebra appeared unsettled. A frontier outpost.

As they
approached Dewey, Culebra’s one and only town, the last rosy tinge faded from
John’s vision and reality settled in. No winsome
señoritas
, no Spanish
guitars, no
haciendas
. Old men in tank tops sat on two benches in front
of a short block of shops painted in dusty pastels. The small plaza with its
tree benches, picnic tables, and old-fashioned streetlights across from the
squat terminal with its wall of glass-block windows only made John long for the
more stately colonial plazas in Old San Juan. Just beyond the main block,
red-and-white columns for a drawbridge reared up behind the tired shops.

As he
waited behind a father laden with sand pails, a mountain of beach towels, and
an open Medalla, John shifted from foot to foot. At last the father lurched
away and John shouldered his backpack, grabbed his bag, and disembarked into
paradise, two hours and ten minutes after getting on the ferry.

After a
quick tour of downtown Dewey, he returned to the
público
stop near the
dock. Four
people
waited in the sparse shade across the street,
talking and drinking beer. Half a block away, a liquor store did a brisk
business from foot traffic, including some graying
gringos
who looked
more than a bit pickled from sun and drink. When the
público
finally
came, John walked all the way to the back, slid into a seat, and stared out the
window. His dreams of colonial villas teeming with bougainvillea and surrounded
by lush green landscaping had died, and they’d died hard. He glared at the arid
and hilly terrain during the whole ten-minute ride to Playa Flamenco,
supposedly one of the world’s ten best beaches. The architecture relied on the
ubiquitous cinderblock and no amount of bright-red blooms softened their
angles. At least Wean Hall, in whose bowels his networking lab resided,
daunted. These homes just depressed.

When he
saw the rusty chain-link fence around the camping area and the sandy field that
stood for a parking lot, John almost went back to Dewey. The backpack and bag
weighed his arms down and he propped himself against the fence with his eyes
closed until he could bring himself to rouse the dozing Culebrense in the shack
identified as the camp office. The man shrugged when John asked about renting a
locker. John rolled his eyes and turned on his heel, dragging the bags with
him. He halfway hid them among some guinea grass near a tree trunk.

Through
the palms and over a small rise, laughter and loud music from the mob of
weekend beachgoers repelled John from Playa Flamenco and back to the
público
.
He’d eaten
huevos rancheros
hours before and his stomach demanded more
cocina
criolla
, more Puerto Rican food, before he headed off for snorkeling. The
Pepto pink of Señorita’s, a two-story guesthouse, drew him in the glare of
early afternoon. He enjoyed lunch there so much that his disappointment in not
finding paradise began fading and when he rented snorkeling gear, the primitive
machine for swiping credit cards only added to Culebra’s growing rustic charm.
It was time to find out if the snorkeling and diving around Culebra redeemed it
altogether.

Half an
hour later, he strode toward the trail to Carlos Rosario, a reef that the
dive-shop owner had raved about. At the trailhead, he stopped long enough to
read the sign posted on the chain-link fence that warned against straying off
the trail and into an area littered with U.S. Navy ordnance. John’s chest
tightened, threatening a familiar panic attack, and he took a step back. Three
carefully controlled exhalations seemed to relax his breathing, but he took
three more for good measure and stepped onto the lonely, risky path.

A strip
of white sand and ocean met him at trail’s end. Nothing but the delicious sound
of waves sighing against the shore and an occasional wild cry overhead from a
seabird. The crystalline color of the water seduced his screen-weary eyes and
something let go of him, some grip of asphalt and glass-walled office
buildings, and he breathed in deeply. Even if he saw nothing but rocks and
hermit crabs, the surreal blue saltwater against a clear Caribbean sky redeemed
his trip, made Culebra a paradise, cellulite thighs and cinderblock eyesores be
damned.

A
hundred feet out he saw the shadow of coral reef. To the south, a narrow canal
separated Culebra from a large cay. The dive-shop owner had recommended the
canal for a first snorkel dive. Of course, the guy had warned against
snorkeling alone, but alone with nature was
exactly
what he wanted to
be. He’d return to the Carlos Rosario reef after he’d gotten his feet wet in
the canal. Grinning at his weak joke, he whistled a short tune. Even weak jokes
were funny when Zoë wasn’t around.

To get a
better idea of what he was getting himself into, John dropped his gear on some
bare ground among the clusters of cactus and guinea grass near the trail and
climbed a twisted mangrove to look out over the canal. From this height, he saw
clumps of turtle grass in the shallow waters where fish of all sizes darted in
and out of the swaying blades. Besides the fish and dozens of birds surfing
along air currents, not another soul intruded upon his peace. Satisfied with
his reconnaissance, he climbed down, stripped off his t-shirt and snatched up
the snorkel, goggles, and flippers.

John
hadn’t snorkeled since senior year at Berkeley, but once he plunged his face
underwater he wondered why he’d waited so long to do it again. He’d descended
into another world, vast and silent except for the regular gurgle of his
breathing in the tube. All around him, organic shapes defied right angles and
straight lines, flat planes and intersecting sides. Colors ranging from subdued
to garish—but never dull as concrete or bland as limestone—enticed his
city-weary eyes. There was a mystery here, a truth so sublime that it defied easy
expression into variable and quantity.

He
swayed on the current, gazing at parrotfish with their hooked beaks darting
among the blue tangs. A squadron of sergeant majors soared over the reef south
of him, their black stripes flashing as they banked and turned. Copper-colored
squirrelfish with their big brown eyes, ocean surgeonfish, and slender
needlefish swarmed ahead of him. Here was primeval life, unaware and
unconcerned about the self-important ambition of computer scientists in their
office cubicles overgrown with cable and whirring disk drives.