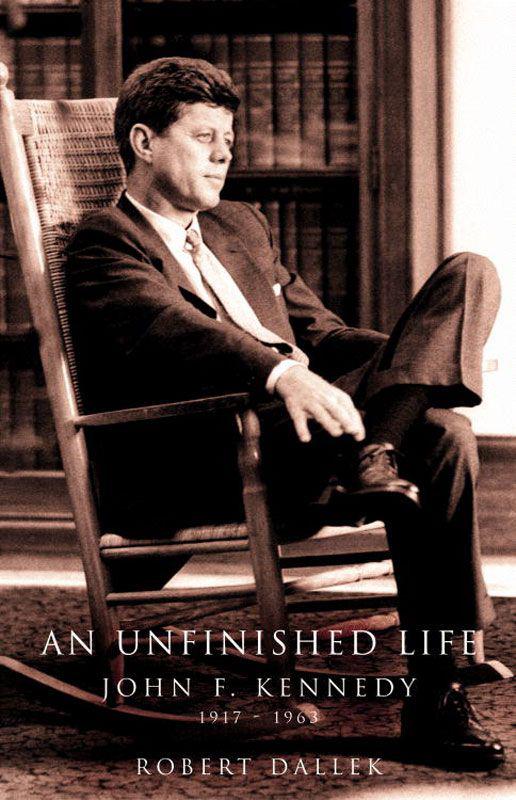 PART ONE
: Growing Up

CHAPTER
3: The Terrors of Life

CHAPTER
9: The Torch Is Passed

CHAPTER
10: The Schooling of a President

CHAPTER
11: A World of Troubles

CHAPTER
14: The Limits of Power

CHAPTER
16: To the Brink—And Back

Hail to the Chief: The Making and Unmaking of American Presidents

Ronald Reagan: The Politics of Symbolism

Democrat and Diplomat: The Life of William E. Dodd

To Len and Myra Dinnerstein, Larry Levine, and Dick Weiss—forty-seven years of fond memories— and to Jeff Kelman—my instructor in medicine

Think where man’s glory most begins and ends, And say my glory was I had such friends.

Why another Kennedy book? I was asked repeatedly during the five years I worked on this biography. The availability of new materials—written contemporary documents, telephone and Oval Office tapes, and entire oral histories or parts thereof—seemed ample reason to revisit Kennedy’s personal and public lives. I also took guidance from science writer Jacob Bronowski: “Ask an impertinent question and you are on your way to a pertinent answer.” As I worked my way through the records, I was startled by how many fresh things could be said based on the combination of old and new files about the man, his family, and his political career. To cite just a few examples, new documents reveal more clearly the cause of the accident that killed Joseph Kennedy Jr. in World War II, how Bobby Kennedy became attorney general in 1960, and what JFK thought of U.S. military chiefs, their plans for an invasion of Cuba, the American press corps in Saigon, and the wisdom of an expanded war in Vietnam.

As with all our most interesting public figures, Kennedy is an elusive character, a man who, like all politicians, worked hard to emphasize his favorable attributes and hide his limitations. He and those closest to him were extraordinarily skillful at creating positive images that continue to shape public impressions. My objective has not been to write another debunking book (these have been in ample supply in recent years) but to penetrate the veneer of glamour and charm to reconstruct the real man or as close to it as possible. The result is not a sharply negative portrait but a description of someone with virtues and defects that make him seem both exceptional and ordinary—a man of uncommon intelligence, drive, discipline, and good judgment on the one hand, and of lifelong physical suffering and emotional problems on the other. I have not emphasized one aspect over the other but have tried to bring them into balance. Learning, for example, a great deal more than any biographer has previously known about Kennedy’s medical history allowed me to see not only the extent to which he hid his infirmities from public view but also the man’s exceptional strength of character. In addition, I have tried to understand his indisputable womanizing, including previously unknown instances of his compulsive philandering. More significant, I have ventured answers to questions about whether his health problems and behavior in any way undermined his performance of presidential duties.

I have also tried to judiciously assess the negative and positive family influences on his character, the record of his navy service, his House and Senate careers, and, most important, his presidential policies on the economy, civil rights, federal aid to education, health insurance for seniors, and poverty, and, even more consequentially, on dealings with Russia, nuclear weapons, space, Cuba, and Vietnam. I have not hesitated to say what I believe Kennedy might have done about the many ongoing problems certain to have faced him in a second term, however open to question these conclusions may be. “It is better to debate a question without settling it than to settle a question without debating it,” said Joseph Joubert, a French philosopher of the eighteenth and nineteenth centuries.

I believe this biography provides the most authoritative discussion to date on Kennedy the man and his political career. Nonetheless, however much it may be a significant advance in understanding, I have no illusion that I am recording the last word on John F. Kennedy. The economist Thorstein Veblen was surely right when he cautioned that “the outcome of any serious research can only be to make two questions grow where one question grew before.” Add to this the man’s almost mythical importance to Americans and hundreds of millions of people around the globe and you can be certain that future generations will be eager for renewed attention to him in the context of their own times.

Every man had to test himself, and if he was courageous and lucky he found maturity. That was all the reward you could ask for, or were entitled to: growing up.

George Bernard Shaw, speaking as an Irishman, summed up an approach to life: . . . “I dream things that never were—and I say: Why not?”

IN AUGUST 1947
, John F. Kennedy traveled to Ireland. The trip was notable for several reasons. Kennedy was first and foremost a “good New Englander,” an American—so said the Irish ambassador to the United States—who had all but lost his connection to the old country. Indeed, recalling how often Jack Kennedy had visited England in the 1930s and early 1940s without going to Ireland, the ambassador archly described Kennedy as “an English American.” “Many people made much of his Irish ancestry,” one of Kennedy’s English friends said. But he was “a European . . . more English than Irish.” Now, at long last, he was going home. That was not, however, how his father saw it. For Joseph Patrick Kennedy, whose drive for social acceptance shadowed most of what he did, being described as an “Irishman” was cause for private rage. “Goddamn it!” he once sputtered after a Boston newspaper identified him that way. “I was born in this country! My children were born in this country! What the hell does someone have to do to become an American?”

But his son had if not formed a deep emotional attachment, at least taken his cue from his mother’s father, John F. Fitzgerald. “There seems to be some disagreement as to whether my grandfather Fitzgerald came from Wexford, Limerick or Tipperary,” Kennedy would later recall. “And it is even more confusing as to where my great[-]grandmother came from—because her son—who was the Mayor of Boston—used to claim his mother came from whichever Irish county had the most votes in the audience he was addressing at that particular time.” And indeed, when the twenty-nine-year-old had first run for Congress the year before, Irish Americans in his district had been hesitant to support Kennedy because of his lack of ethnic identification, let alone pride.

Officially, Kennedy was on a fact-finding mission to study the potential workings of the Marshall Plan in a Europe still reeling from the devastation wrought by the Second World War. Unofficially, it was a chance to relax with Kathleen Kennedy Hartington, Jack’s favorite younger sister, who was even more “English American” than he was. Though her husband, William Cavendish Hartington, who was in line to become the next duke of Devonshire, had died in the war, Kathleen had stayed in England, where the Devonshires treated her with fond regard. They gave her free run of their several great estates, including Lismore Castle in southern Ireland’s County Waterford, a twelfth-century mansion once owned by Sir Walter Raleigh. Kathleen called it the “most perfect place” in the world.

Kathleen asked Jack to join her for a vacation at Lismore, where she promised to bring him together with former Foreign Secretary Anthony Eden; Pamela Churchill, the divorced wife of Winston’s son, Randolph; and other prominent English social and political lions. “Anthony Eden arrives today,” Kathleen wrote an American friend, “so by the end of the week he and Jack will have fixed up the state of the world.”

Like Kathleen, Jack Kennedy had been schooled to move comfortably in privileged circles. Jack and Kathleen did not think of themselves as anything but American aristocrats. Wit, charm, and intelligence added to the cachet he carried as a congressman and the son of one of America’s wealthiest entrepreneurs who himself was a former ambassador to Britain.

Yet those who met John Kennedy for the first time in 1947 found little assurance in his appearance. Though having passed his thirtieth birthday in the spring, he looked like “a college boy,” or at best a Harvard Ph.D. candidate in political science. He contributed to the impression with his casual attire, appearing sometimes on the House floor in khaki pants and a rumpled seersucker jacket with a shirttail dangling below his coat or in the House cafeteria line in sweater and sneakers. At six feet and only 140 pounds, his slender body, gaunt and freckled face, and full head of tousled brown hair made him seem younger than his thirty years. Even when he dressed in formal suits, which was not often, it did not make him look older or like a congressman. “He wore the most godawful suits,” Mary Davis, his secretary, said. “Horrible looking, hanging from his frame.” Unlike so many members of the House who self-consciously dressed the part, Kennedy reflected his sense of entitlement in his informal dress. But it did not encourage an impression of maturity, and it was difficult for most colleagues to take him seriously. He initially struck veteran congressmen as the son of a famous family who had inherited his office rather than earned it. Sometimes he didn’t impress them at all. “Well, how do you like that?” he asked his congressional office staff one morning. “Some people got into the elevator and asked me for the fourth floor.” During his first week in the House, a veteran congressman who mistook him for a page demanded a copy of a bill until Jack informed the astonished member that they were colleagues.