Read And They Danced by the Light of the Moon Online

And They Danced by the Light of the Moon 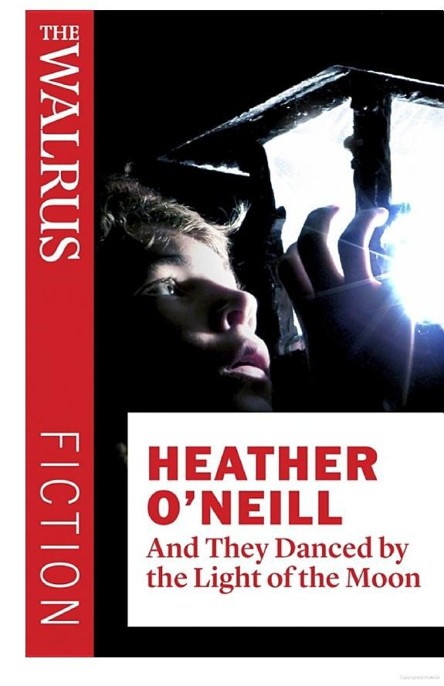 And They Danced by the Light of the Moon

If you enjoy this book, please consider subscribing to
The Walrus
. To subscribe online, visit our website at
walrusmagazine.com/subscribe

“
The Walrus
is one of the best things that has happened in Canada. It’s very rare, an outfit like this, informed by integrity, vision, and dedication. Please help The Walrus survive. We need it.”

T
HE PRINCIPAL stared at the boy sitting on the chair across from his desk. Jules Tremblay was wearing a pair of penny loafers with gym socks. He had on a beat-up suit jacket over an undershirt and velour track pants with holes in the knees. One of his eyes had the remains of a big yellow bruise around it, as if it had been blackened in the past couple of weeks. It made Jules look as if he was wearing sunglasses and one of the lenses had fallen out. His greasy dirty-blond hair was swept back over his head.

Jules had really outdone himself this time. He had spray-painted the words “Welcome aliens! Land here!” on the black pavement of the schoolyard. But the principal didn’t like to call home to talk to Jules’s dad. The man was vulgar and would yell on the phone.

The last time Jules had been suspended, his dad had shown up at the school. He had a beer belly that was as round and hard as that of a pregnant woman. He had pulled a Led Zeppelin T-shirt over it and a leather vest that could never be buttoned. His skin was a greyish-blue because his pores had all gone black. When he started cursing, his cheeks went pink like roses and his eyes shone a terrible light blue. The principal didn’t know that it was syntactically possible to say the word ‘fuck’ that many times in a sentence. Jules’s dad was oddly handsome, though. Some of the older teachers remembered when he was a student there. He was a heartthrob, a sex symbol, or something like that. Dear Lord, thought the principal.

Jules leaned forward and picked up a snow globe from the principal’s desk and started shaking it. He shook it so violently that the people in that miniature town were surely going to have to declare a natural disaster.

“Why do you try to antagonize the teachers?” the principal asked.

The sound of the secretary’s typewriter suddenly started up like machine guns in the distance. Jules put down the snow globe and looked at the principal.

“I don’t even know what that means.”

“If you don’t know the meaning of a word, can you still do it?”

“All right, I know what it means, for crying out loud. It’s because I wanted to show some hospitality. I figure that the only tourism this town is going to get will be from outer space.”

“Be serious for a moment, Jules.”

“I just get bored and crazy, because I’m in a small town and nobody is thinking about certain things that I like to think about. I am alienated, so I need some fellow aliens to come keep me company.”

“If you stay in school, you could go to college.”

“You can’t really make a living as a poet.”

“Yeah, but somebody’s still got to write the poetry, right?”

The principal had not grown up in Val des Loups. He had lived in Trois-Rivières and had gone to university in Quebec City. Val des Loups was the smallest place that he had ever lived, and he’d had a culture shock when he moved there. The people were stranger than he had ever dreamed. They had their own fashions. They all dressed like they were on their way to a heavy metal concert, even the old men. Women still had beehives. When he moved in, his neighbour was wearing a rabbit skin fur coat and a leather hat with a red ribbon around it and chewing on a toothpick, leaning against his van, just staring at him.

He also noticed that the inhabitants of Val des Loups were all able to smoke without taking the cigarette from their lips. They were strong. They could lift refrigerators and stoves. When they let loose on Saturday night, it was truly horrific. The old men put their teeth in empty margarine containers and went out to the same dance hall as the nineteen-year-olds who were begging one another to get married. There were people dancing with their toques and filthy boots in an old ballroom, clinging to each other as if they were dying. Condoms were a sin. God listened to the sound of belt buckles unbuckling and falling onto the floor, like a shovel hitting the rock, as children were about to be begotten into unhappy households. And God saw that it was good.

The inhabitants of Val des Loups were religious in the sense that they believed in miracles. There was a tale that people told about a man named Jacob who, after a night of heavy drinking, woke up to find a tattoo of the Virgin Mary on his arm. Another man forgot his boots at work, and they walked home by themselves and were waiting for him at the front door. One New Year’s Eve, a man was able to sing like Charles Aznavour for one single night, and the next day he went back to being tone deaf.

Sometimes the principal himself felt just as trapped as Jules here. The stars were so low. It made him feel as if he was a cricket trapped in a jar and the stars were holes punched in the lid so he could breathe. He met a little girl wearing nothing but a red coat that was too small for her, a pair of underwear, and rubber boots. She was carrying a mouse in her hands. When he asked her what the mouse’s name was, she said, Papillon. That was the closest he had come to finding anything like a poem in Val des Loups.