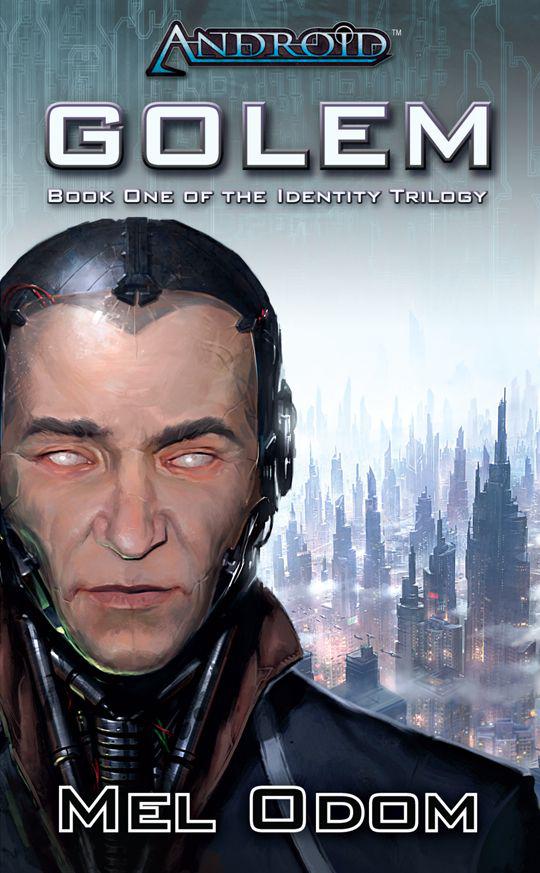 For my buddy, Keith Birdsong, who’s shared the journey for the last twenty years.

This is a work of fiction. The characters, incidents, and dialogue are drawn from the author’s imagination and are not to be construed as real. Any resemblance to actual events or persons, living or dead, is entirely coincidental.

The woman’s plaintive voice grabbed my attention immediately. One of my primary programming functions was the salvation of human life.

The quivering fear that wormed through me was something new, though. I’d never felt that before.

Bioroids registered fear on some level. We had to interact with that emotion in order to respond to the self-preservation encoding that was part of the personality indices, but we didn’t have visceral reactions to it. Bioroids didn’t feel like I felt now.

My eyes snapped open and I saw a familiar room that I knew I’d never seen before. Thick, brocaded curtains covered tall windows. Just enough light filtered around the curtains that I could make out a large entertainment console on the wall opposite the bed, a small breakfast table, and a love seat.

It was a hotel room, not a bedroom then.

That bothered me even more. I’d never spent any time in hotel rooms except on stakeouts. I was a detective, designated Drake 3GI2RC by my manufacturer, Haas-Bioroid, Inc. assigned to the New Angeles Police Department. I was one of the few bioroids to achieve that posting.

A warm feeling crept through me at that achievement. I recognized the feeling as pride, an emotion that was supposed to be dampened by my programming. All of my emotions had been dampened when I’d been brought on-line. They were there, but always kept at a distance so I could focus on efficient and effective operation parameters. My personality had been divined from a human donor’s neural channeling. I felt certain this feeling was some lingering emotion left over from my neural software, something that I had no control over.

But there were problems.

I didn’t take pride in what I did.

I didn’t stay in hotels.

And I didn’t sleep.

That bothered me most of all. As a bioroid, I didn’t need to sleep. I intermittently went off-line to the
office
inside my head to re-evaluate circumstances or work problems, but I didn’t sleep. In my seven years of life as a bioroid, I’d never had occasion to awaken.

I tried to remember where I had been before I’d found myself in the hotel room. I couldn’t. My chest felt tight, and something akin to the nudge of fear preserving my interest in my continued survival thumped through me.

The feeling was wrong. There was no direct stimulus for it. Not only that, but my chest
couldn’t
feel tight. My chest was stainless steel, formed in a generally human shape, and it didn’t move. I was a finely tuned machine with a carefully cultivated human-like intellect and none of a human’s weaknesses.

The feeling was imaginary. I had a creative mind, yes. Without that creative thought process, I couldn’t problem solve. Without it, I couldn’t figure out the motivations of human men and women who killed each other for reasons that I understood on an intrinsic level brought about by my training, but I couldn’t sympathize with.

In the last seven years, my imagination had never betrayed me.

The voice came again, stronger this time. I replayed it through my audio receptors and tried to pinpoint where it came from. The pitch suggested it came from nearby, but there was no accompanying echo trapped within the room.

Someone moved beside me. An arm slithered around my neck.

Surprise galvanized me into motion. I’d never slept with anyone in my whole life. I lived in a small apartment. It was where I went when I was off-duty. There, I read case studies, information I could use in my job as an investigator, and reviewed active cases. I didn’t make friends.

I plucked the arm from my chest and studied it. The limb was obviously feminine: slender and possessing painted fingernails. A few beauty marks showed darker brown against the golden glow of her skin. The arm felt warm in my fingers.

Then I noticed my hand, and that it wasn’t mine. This hand was strong and callused, with scarred knuckles.

Bioroids were constructed with human features, but those features could never pass for human. They’re too sharp, too symmetrical, too
artificial.
Haas-Bioroid, Inc. had deliberately created the faces of the units they manufactured to give the semblance of being human, but never to be confused with a human.

I blinked, another thing that I didn’t do, and my hand changed, became the one I was familiar with. Like a bioroid’s face, a bioroid had hands that appeared human. We had simple, barcoded fingerprints and the near-human tissues secreted just enough oils to identify us and the things we touched.

To mingle with humans, a bioroid’s hands had to be sensitive. A bioroid masseuse couldn’t use cold, insensitive metal or ceramic hands to massage a human. We had to have hands that could pass as human in texture and temperature.

Unfortunately, to do that a bioroid’s body had to maintain a hydrostatic condition that necessitated fluids pumping through them on a regular basis. Since the rest of a bioroid’s arm was metal and articulated joints made from springs and hinges, tubes had to run to the hands from an implanted pump. Those tubes immediately marked a bioroid as such and drew more hostility and fear from un-accepting humans than the stiff faces.

I rolled my head to my left to survey the woman next to me. I reached up for the small light on the nightstand next to the bed. When I turned it on, the weak yellow light lifted her from the darkness.

I ran the identification template I’d compiled for working with the New Angeles Police Department. She was in her late thirties, black hair past her shoulders, 170 centimeters in height, 56.8 kilograms, and looked to be in good physical condition. There were no distinguishing scars.

I was sure I didn’t know her, yet, there was something familiar about her.

Delicately, I shifted her hair from her face with a finger so I could see her features more clearly. My touch, light as it was, woke her. Her eyes opened and she smiled up at me.

“What do you have in mind?” Her voice was a pleasant baritone, made slightly deeper because she’d just awoken.

Her eyes were different colors: her left was green and her right was blue. I filed that away in my template, as knowledge of the medical condition that caused the aberration came to my mind.

Heterochromia was a condition caused by a lack of melanin. In the woman’s case, the heterochromia was full-blown, resulting in completely different colors of the irises instead of just a partial mismatch. Genetics, disease, or injury could attribute to the mismatch.

I didn’t know how to respond to her question. I didn’t know whether to treat the woman as a supervisor, a co-worker, a victim, a perpetrator, or an informant. Those were my primary categorical breakdowns for interaction with others. This woman was an unwelcome enigma in my life.

I could feel discomfort at things that didn’t belong. That, too, was part of the neural channeling that helped me perform my job as a detective. I certainly felt it now.

Unexpectedly, the woman leaned forward, ran her hand behind my head, and kissed me. I felt her lips against mine and the warmth of her body against me. She was naked beneath the covers. I knew that now.

I let her finish the kiss because there was nothing in my programming on how to deal with this. Bioroids were sexless in form and function. Only our personalities maintained any kind of gender selection, though the body construction was altered to fit the personality for the sake of human sensibilities. We were designed to fit in with humans and to meet certain roles.

I knew I was male, but not in the sense that the woman obviously sought. I had no real reaction to the physical contact except to take her body heat—97.8 degrees Fahrenheit—and to note that her overall physical condition was athletic. Her heartbeat was elevated and rising, but within acceptable norms. She smelled like lilacs and salt. I don’t breathe, so I didn’t inhale her scent, but I had olfactory sensors that allowed me to scent things. A sense of smell was important in my job.

Uncertain how to proceed with the interrogation, I considered asking questions. I could hardly tell the woman what was wrong without knowing where we were and what we were doing together. Or who I was.

What I most wanted to do was report to Haas-Bioroid to have a diagnostic test done. Something was wrong and that thought gave me pause. Bioroids sometimes got scrapped when they started having problems. I knew I didn’t want to be one of those. Self-preservation was a tricky thing to install in a bioroid. As long as my deficiencies didn’t cause harm or offer potential harm to a human, I was supposed to stay functional.

Yet, I knew I wouldn’t tell anyone of my present condition until I knew for certain that it would not end in termination. As I said, the coding is very precise.

A hurt look filled the woman’s mismatched eyes and I experienced regret over that. The feeling wasn’t very strong because I knew the hurt she took upon herself wasn’t due to anything I had or hadn’t done. The hurt belonged to her because of her expectations of me.

I wasn’t who she thought I was. I didn’t know what I was doing there. I debated telling her that, but I didn’t know what effect that revelation would have on her. Preserving a human’s safety was also a tricky thing. Physical well-being had to be balanced against mental well-being. The physical had to come first.

A device pinged on the nightstand.

I swiveled my attention to it. The device was compact, a square with a gel viewing screen that fit comfortably in my palm when I lifted it for inspection.

On the screen, vid views shifted rapidly, showing men coming up a stairwell. They wore dark clothing, light coats that fell to their calves, and hard looks. As I watched, one of the men pulled a hood from inside his coat and tugged it over his face. Once the hood touched the collar of the armored vest he wore under the coat, the memory fiber activated. The hood became hard and sleek. At that point, it was more armor than fashion. Despite having his eyes covered, he moved without hesitation and I knew the hood had vid circuitry embedded in it. The available vid was probably a 360-degree view. I had that as well, even though my eyes set forward in my face. Not all of my vid equipment was in my eyes.