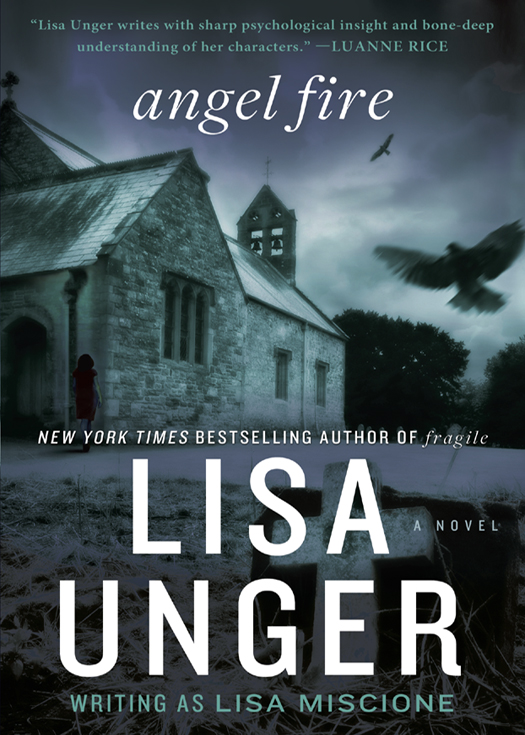 “Remarkable and emotional debut … The touching love story that plays out in the background is refreshing in its sincerity and emotional depth.”
—
New Mystery Reader Magazine

“Worthy of widespread acclaim. She has the ability to write with great beauty in describing the landscape of this character-rich debut … well recommended.”
—
Deadly Pleasures Magazine

“An excellent debut novel … A smart, well-developed mystery that will leave you hanging on every page as you devour this book.… There’s a new author on the scene, Lisa Miscione. You don’t want to forget this name!”
—
Book Review Cafe

“Miscione hits the ground running, quite literally … in her debut novel featuring crime writer Lydia Strong.… There’s a surreal and nightmarish quality to the story.… It remains gripping and terrifying right through the carnage of its final scene.”
—
Publishers Weekly

Darkness, My Old Friend
Fragile
Die for You
Black Out
Sliver of Truth
Beautiful Lies

The setting of this book was inspired by the beauty and mood of the Santa Fe and the Angel Fire, New Mexico, areas. Readers intimate with these very real places will realize that I have taken significant geographical, topographical, and architectural liberties as per the demands of the narrative, my vision, and my imagination.
Angel Fire
, as well as its characters and setting, is entirely a work of fiction.

All rights reserved.
Published in the United States by Broadway Paperbacks, an imprint of the Crown
Publishing Group, a division of Random House, Inc., New York.

Broadway Paperbacks and its logo, a letter B bisected on the diagonal, are trademarks of Random House, Inc.

To my parents, Joseph & Virginia Miscione
Who gave me the tools to build the craft on which I travel …

To my husband, Jeffrey
The North Star,
The red sky at night,
The wind inside my sails …

Excerpt from
Darkness, My Old Friend

I was nineteen years old when I first met Lydia Strong. I was living in the East Village, dating a New York City police officer, and attending Eugene Lang College, the undergraduate school of the New School for Social Research. I was sitting in a car, under the elevated section of the “1” line in the Bronx, waiting—for what I can’t remember. But in my mind that day, I kept seeing this woman running past a church. She was in New Mexico. And all I knew about her was that she was a damaged person, someone in great pain. Running, for her, was salve, religion, and drug. That was Lydia.

I pulled a napkin and a pen from the glove compartment and started writing the book that would become
Angel Fire
. It took me ten years to write that novel, mostly because the years between age nineteen and twenty-nine were, for me, years of hard work and tumultuous change. But also because during that time, I let my dreams of becoming a writer languish a bit. Lydia was faithful; she waited.

In spite of a first-rate education, a career in publishing, and a strong desire to write fiction, I didn’t know much of anything when I was writing my first novel. I don’t think you
can
really know anything about writing a novel until you’ve actually written one. (And then you go to school again when you sit down to write your second, and your third, and so on.) All I knew during that time was that I was truly fascinated by this woman occupying a place in my imagination, and I was deeply intrigued by her very dark appetites. I was enthralled by her past, by the mysteries in her present, and why she wouldn’t let herself love the man who loved her. There were lots of questions about Lydia Strong, and I was never happier over those ten years than when I was trying to answer them.

I was fortunate that the first novel I ever wrote was accepted by my (wonderful, brilliant) agent Elaine Markson, and that she fairly quickly brokered a deal for
Angel Fire
and my second, then unwritten, novel
The Darkness Gathers
. I spent the next few years with Lydia Strong and the very colorful cast of characters who populated her life. And I enjoyed every dark, harrowing, and complicated moment with them as I went on to write
Twice
, and then
Smoke
.

I followed Lydia from New Mexico, to New York City, to Albania, to Miami, and back. We trekked through the abandoned subway tunnels under Manhattan, to a compound in the backwoods of Florida, to a mysterious church in the Bronx, to a fictional town called Haunted. It was a total thrill ride, and I wrote like my fingers were on fire.

I am delighted that these early novels, which I published under my maiden name, Lisa Miscione, have found a new life on the shelves and a new home with the stellar team at Broadway Paperbacks. And, of course, I am thrilled that they’ve found their way into your hands. I know a lot of authors wish their early books would just disappear, because they’ve come so far as writers since they first began their careers. And I understand that, because we would all go back and rewrite everything if we could.

But I have a special place in my heart for these flawed, sometimes funny, complicated characters and their wild, action-packed stories. I still think about them, and I feel tremendous tenderness for even the most twisted and deranged among them. The writing of each book was pure pleasure. I hope that you enjoy your time with them as much as I have. And, thanks, as always, for reading.

L
ydia Strong ran. She ran until her muscles cramped, until her lungs were on fire. She ran until she couldn’t run any farther. And then she kept running. She ran like she had something to prove, and would die trying to prove it, if necessary. Down the dirt drive from her home, nestled in the foothills of the Sangre de Cristo Mountains north of Santa Fe, off onto the rocky path that led past the church in Angel Fire.

When she ran, she was lost and she was found. She left behind the chaos of her thoughts and fears, left behind her life, her work. In running she found an animalistic kind of peace. She was a living organism motivated only by her physical self, the desire to rest and the drive to go on, go farther, and farther still. She was only her lungs and her legs. It was painful but it was quiet. This ritual served as Lydia’s only religion these days.

She did not deny the possibility of a god or a godlike force, but organized religion … out of the question. Still, this August morning, like most mornings, she felt a tug at her heart as she ran past the small white church. The Church of the Holy Name sat proud and undeniable by the side of the dirt road. White and immovable like the moon, it rose from the dust and the weeds. It was just as it was one hundred years ago, solid and righteous as if it had
grown from the earth like a mountain. It was so sure of itself, its walls painted orange, pink, purple by the rising sun.

As a child, she had attended church with her mother every Sunday. It was always an event, because her mother was a devout woman. The joy Marion Strong took in the church service was contagious, for Lydia loved her mother fiercely and had wanted, then, to be just like her in every way. She was excited to wear one of her most precious dresses. She would walk with her mother proudly, imagining that people who saw them would think she was an adult, since her shoes made noise just like her mother’s as their heels clicked on the sidewalk.

Once inside the church her mother would give her four quarters, two for lighting a candle for each of her dead grandparents and two for the collection plate. They would sit in the center pew. Lydia waited with restless anticipation for the time to sing. When the organ sounded and the hymns began, with all the might of her few years Lydia would sing her heart out, for she knew all the words. Her mother would look down at her, smile and sing in her high, melodic voice. Lydia felt such a sense of belonging. Everybody, it seemed, was there for the same reason. Everybody sang together and everybody smiled and shook hands. “Peace be with you.”