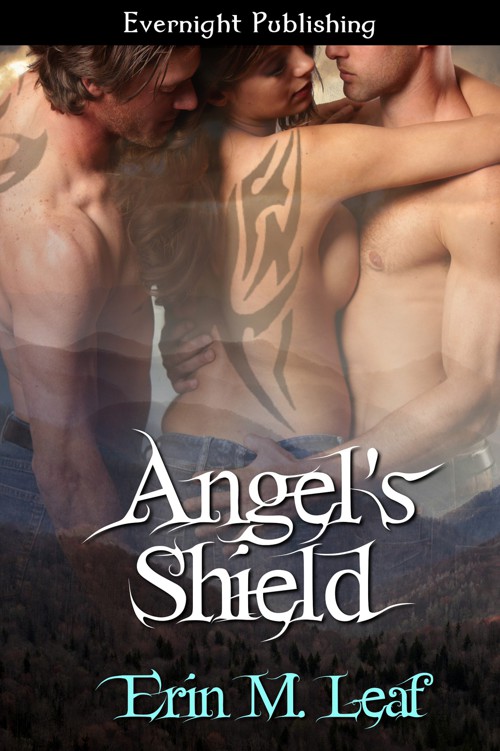 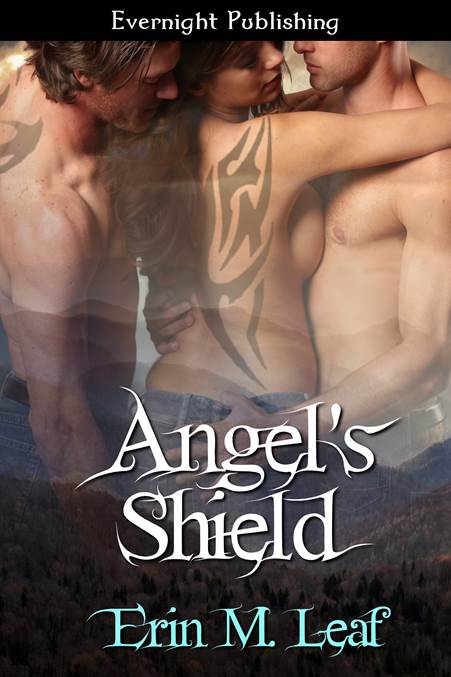 For JoAnne, my intrepid
editor: thank you!

Haniel forced his eyes open and swallowed past his sore throat.
Jeremiel crouched over him, hands on Haniel’s shoulders.

“You with me?” Jeremiel asked again.

“Here. Have some water.” His friend handed him a bottle.

The sides were cold and damp, condensation tracing patterns on the
battered metal. Haniel struggled to sit up. Jeremiel gave him a boost,
grimacing sympathetically when Haniel bit back a moan. His skin hurt. His
bones, too. His whole body ached, as if he’d jumped into a crushing machine and
somehow come out the other end still alive. He tipped his head back and flipped
open the top of the bottle, pouring some of the water over his face. The
humidity in the forest was so thick he could barely breathe, but that wasn’t
why he felt so wretched.

“We need to find a cure for this,” Jeremiel said, watching his
friend sip the water.

Haniel shook his head. “There is no cure.” He held out his right
arm. “See? The burns are healed, but my legacy marks are gone. Everything that
made me an angel is gone.” He grabbed Jeremiel’s arms, tracing the dark
patterns that swirled up his friend’s skin. “You don’t understand because you
still have your wings. You can still fly the winds. I should just let myself
fade—”

Jeremiel interrupted him. “You’ll fade over my dead body,” he said
grimly. “I understand more than you think.”

“I can’t shift anymore. I can’t fly the winds. I can’t do anything
except wander around, searching for God knows what. What are we doing,
Jeremiel?” he asked his friend bitterly. “Killing demons is all well and good,
but it doesn’t replace what I’ve lost.”

“We’re surviving. It’s not your fault the demon burned you. You’re
lucky to be alive.
I’m
lucky to be alive, thanks to you. If you hadn’t
jumped in front of me, I would be dead.” Jeremiel took a deep breath. “Come on.
Your body is done tormenting you for another month. It’s still morning. We can
hike south a bit more before setting up camp for the night.”

Haniel sighed. “Suppressing the urge to shift never felt this
horrible.” He hauled himself to his feet, ignoring the residual pain that
sparked through his body.

“Because instinct forced us to shift when we resisted. We could
only suppress so much.” Jeremiel stared off into the distance, giving Haniel
some space. He was always touchy after one of these episodes and Jeremiel had
learned to keep his distance the hard way. “None of us can stop the shift. If
we don’t change into angel form at least once a month, instinct does it for us.”

“You’re telling me something I already know!” Haniel felt like
shaking his friend until his teeth shattered and fell out of his skull. He
couldn’t do that, though. Jeremiel had stayed by his side the whole time, ever
since the battle that had reduced him to half an angel. Instead, he shoved his
anger down and swallowed it, as he’d been doing for the past two years. “My
instincts are whole, but my body is damaged. No one should have to endure this.
It’s not even the pain, really, that I can’t stand.” He looked up, trying to
see the sky between the trees. “It’s being earthbound. It’s the worst thing
that could happen.”

Jeremiel turned abruptly and grabbed Haniel’s shoulder, blue eyes
bright. “You’re right. And that’s why we’re wandering, isn’t it? The demons
must be stopped so this never happens to anyone else.”

Haniel swallowed, then nodded slowly. Jeremiel was right. Killing
demons was the only reason he hadn’t let himself fade into the mist. Hatred
kept him alive. “We’ve killed a lot. There will be more.”

“There are always more,” Jeremiel said. He pointed south, down
trail. “Look, the way is clear. We simply need to keep going.”

The trees rustled in the breeze as if to punctuate his statement.
At least it was summer and warm. Wandering in the winter was far, far worse.
Haniel gathered his backpack and shrugged it on. “Okay. Let’s go.”

Charmeine stared out the front window of Ridgeline Diner, coffee
pot forgotten in her hand. The sky was blue and so very pretty today. Not for
the first time, she wished she could take off running and jump into the air.
Fly like an angel. She wondered what the wind felt like up there.
Maybe I
should save up, take some skydiving lessons,
she mused, thumb rubbing along
the worn plastic of the pot’s handle.

“Charmeine! Hey, stop daydreaming and get back to work,” Melvin
called from the grill behind the bar. Her boss wasn’t angry with her, not
exactly—he’d caught her staring out the window too many times to be irritated,
but he meant business. They had a full house and she was supposed to be bringing
coffee to the front tables.

She waved a hand at him and began to serve their customers. Most
of them were locals about to head off to work. A couple of electricians sat at
table one; a group of women who worked in the chocolate factory just outside of
town were at table two. Table three held four old men who’d been coming to eat
breakfast here for decades.

“Caught with your pants down again, eh, China girl?” one of the
oldsters cackled.

She rolled her eyes at him. “I’m wearing a skirt, Charlie, but I
know you can’t see anymore, so I forgive you. And I’m American, not Chinese. I
was born here, remember? My mom was from Korea, you know where that is right?
Weren’t you a soldier at some point?” She poured the old man a fresh cup and
topped off the mugs of his friends. “Hmm, I thought you’d been overseas, but I
must be remembering wrong.”

“Ha, she’s got you there!” Arnold crowed, jabbing Charlie in the
arm.

Charlie scowled at her, but his blue eyes twinkled behind his
thick glasses. “I once had a girlfriend like you, who mooned about all day
long. She kept tripping over her own two feet.” He shook his head sadly.

“Yeah, and what happened to her?” another one of the men asked,
laughing. “She married me! She said you were boring, Charlie.”

Charlie snorted. “Johnny, you deserved her. She couldn’t cook
worth a damn.”

“But she could kiss,” the man said, nodding emphatically. “Boy,
could she kiss.” He made smacking noises to the loud approval of his friends.

Charmeine laughed as she walked away. The old men never failed to
make her laugh. Sometimes, when the longing for the skies took her completely
over, they’d sing ridiculous commercials from the forties and fifties to snap
her out of it. She had to hand it to them: they’d kept their promise to her
grandmother before the old lady had died a year ago. They might be old, but
they looked after her in their own way.

“Table eight is up,” Melvin called and she hurried to the bar,
setting the coffee on the counter. He slid plates of steaming omelets onto the counter
and wiped his forehead on his arm before turning back to the grill, but not
before flashing her a good-natured smile. The older man was a great short-order
cook and the owner of the diner. She had no idea what she would’ve done without
him and his job offer right when she needed to take care of her grandma. College
was just a wishful dream now.

“Got it,” she told him, stacking the dishes up her arm and
hurrying off. No more time for staring out of windows today. She had work to
do.

“I’m starving,” Jeremiel said, staring down the hill at the little
town nestled among the rolling Appalachian Mountains. “I want a burger.”

Haniel laughed as he adjusted his backpack. “A burger?” He lifted
one of his feet and shook his worn-thin boot at his friend. “I want a new pair
of boots. These have holes.”

Jeremiel shrugged. “Think of the holes as ventilation. It’s
summer. Your toes would stink without all that air flow.”

“Probably because we also need a shower.” He made a show of
sniffing his arms. “Yeah, I definitely need to apply some soap.”

“Maybe we should get a room for a few days. Take a rest,” Haniel
said, heading down the trail. It led into the town, so there was probably a
shelter they could use for a little while. He needed a rest. Hiking was so much
more exhausting than flying, not that he would’ve believed anyone if they’d
told him that a few years ago. “I smell food.” He grinned and waved to his best
friend. “Come on.”

A half hour later they stood outside a quaint little diner nestled
at the end of the town’s main drag. Hilariously, the eatery was constructed out
of an old rail car poking into a larger building, like it had gone off track
and gotten stuck there.