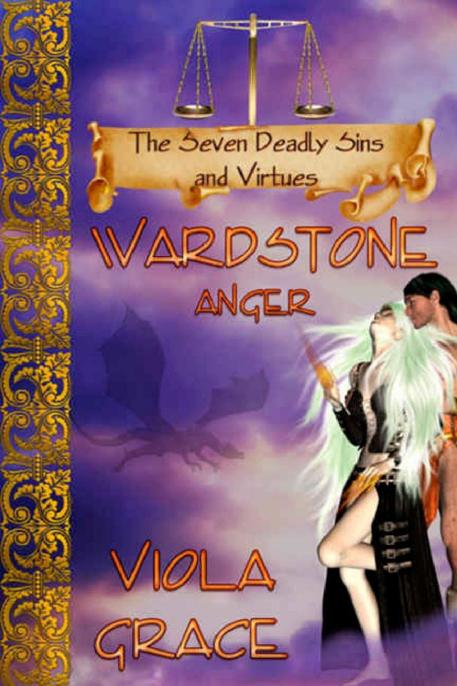 This eBook is displayed using 100% recycled electrons. Distributed by Fictionwise.com

The scanning, uploading and distribution of this book via the Internet or via any other means without the permission of the publisher is illegal, and punishable by law. Please purchase only authorized electronic editions, and do not participate in or encourage the electronic piracy of copyrighted materials. Your support of the author's rights is appreciated.

This book is a work of fiction. Names, characters, places, and incidents either are products of the author's imagination or are used fictitiously. Any resemblance to actual events or locales or persons, living or dead, is entirely coincidental. Wardstone

Published by eXtasy Books, a division of Zumaya Publications, 2006

Altira Warder lay still in the cot given to her by the sisters. Her blond hair spilled over the pillow and to the floor; her blue eyes were sunken and dull with fatigue.

"Orala, you have to take my daughter to my parents. They will train her, and raise her as their own." She gripped her companion's hand, and almost crushed it as a wave of pain rolled over her. One arm clutched her tiny child to her breast, the rosebud mouth pursing in confusion and tiny fingers twitching in agitation.

"I will take her, I promise. Now you have to rest and get better. You are not yet recovered from childbirth." Altira had tried not to show her growing weakness to her friend and the worry on Orala's face tore at her heart.

"I am not getting better." Her body arched in a spasm that left her gasping. Her baby started the coughing wail of the newborn. The midwife had pronounced everything fine, but she didn't realize her patient had no life left to save. Months earlier, Altira had poured her life energy into the wards surrounding a tiny village tormented by seasonal migrations. What little she had left had gone into her child. Her body was empty ... it just didn't know it yet. Her friend had begun to sob in panic, and Altira had no ability left to comfort her.

"Orala! Promise me. She has to go to my parents. Please." Her voice rose in a hoarse whisper to drown out the wailing of her tiny daughter. Her free hand gripped Orala's as she tried to get the agreement that she sought.

She never heard the answer.

A shrouded figure wove through the marketplace, heading for the great stone obelisk in the center. Looking neither left nor right, it continued in a straight line to the base of the amethyst monument. One hand extended and the villagers began to laugh at the stranger who thought it could touch the Wardstone of Talleth.

As her hand contacted the obelisk, the laughter stopped. Murmurs began as energy pulsed from the stone and wrapped lovingly around the stranger. Her hand retracted into the cloak and she turned to address the crowd.

"People of Talleth! You have one month to leave this village and find refuge elsewhere." The statement caused a ripple of laughter to flow through the crowd once again.

A wealthy merchant, by the cut of his clothes, stepped forward and spoke with great authority.

"Why? There is nothing that can harm us. We are protected by the Wardstone."

The woman stood motionless. Behind her, the obelisk began to pulse and shimmer.

The crowd shifted nervously and looked to the merchant for assistance.

The woman broke the silence. "The Wardstone was set in place to protect the village from the annual migrations of the great oxen, to save the dragon Mostyn the trouble of driving them away for two months of the year." 8

Her voice from the depths of the cloak was filled with cold venom, the hatred and fury in it chilling the villagers to the bone. "I have come to reclaim the power Altira Warder left behind."

The muttered whisper of "What?" drifted through the marketplace. One urchin ran to the house of Mostyn and tried desperately to get past the buxom maid and in to see the dragon. He was unsuccessful.

"Villagers of Talleth, you have been warned. You have one month. Then the wards come down. It is your choice." With a final caress of the energy reaching out of the stone to enfold her, she strode through the crowd, crackling blue energy forcing a path through them and keeping any of them from stopping her.

She reached the boundary of the ward and disappeared into the forest.

The crowd broke into nervous laughter everyone in the main marketplace discussing the odd creature who had just visited.

Then Mostyn made his appearance.

The prosperous nature of his village had made him a little soft. While most of the dragons stayed in shape by regular shifting form, he had not had any reason to shift for so many years his paunch currently overlapped his trousers and distended his tunic.

"What? What is it? What has happened?" His bass rumble pierced the silence that followed his appearance. 9

"Begging your pardon, Lord Mostyn." The officious merchant took on quite a different manner now that he was confronted by a known quantity. "A stranger just told us the ward is coming down one month from now."

"And you believed this stranger?" Mostyn threw back his head and laughed.

The crowd murmured in disapproval. This was not a laughing matter.

"There is reason to suspect it might be possible, my lord."

"And why is that? No one can take the wards down except the one who laid them, and she is dead." He smirked confidently at the merchant.

"The stranger touched the Wardstone, my lord. And its power wrapped around the hand that caressed it. A wonderful blue flame."

A murmur of confirmation rippled through the crowd. Mostyn's face darkened in anger. "Nonsense! It must have been some sort of a trick."

"But, my lord, the stranger gave us only a month to leave. What are we to do?"

"Nothing! You will do nothing. Any man, woman or child who leaves this village will answer to me. So do I swear!" With a flourish he left the market, though only after taking a long look at the wardstone. Despite his bravado, he was worried it was possible to take down its protection and he was not up to defending them against the vagaries of nature. It had been far too long.

He had only to stop the stranger from re-entering the village, he decided, and all would be well. He sent a page for his men and paced impatiently until they arrived. When they were arrayed before him, he told them what he wanted.

"I need you to scour the forests for the stranger who touched the wardstone. Capture the creature, and bring it to me." As an afterthought he added, "and watch the villagers to see if any try to leave."

"What?" Bemused, he let the glass he was blowing collapse under its own weight. "Damn." She waved the map at him once again. "We have found Altira's daughter! She is just outsideTalleth." He brushed his green-and-silver hair behind one pointed ear. "Talleth. Wasn't that where...?"

"Yes. But for whatever reason, she is there now. And too damned close to that bastard Mostyn. You need to contact the council and arrange for her protection."

Kesler followed his mostly human wife out of the workshop, but shook his head at all the work that now lay in ruins. This was not the first time they had spotted their granddaughter, but she always disappeared just before they arrived. This time they would take no chances; and though she wouldn't thank them for it, they would throw her to the Dragon Council.

His wife was already in her saddle, looking back at him impatiently.

"I'm coming." He swung up onto the horse then looked more closely at what he was riding. "How in the name of the Nine Hells did you get horses from the Wild Hunt?"

"By trading some of your glassware, dear." That was the last he heard as she spurred her horse to a run, and he had to follow her.

The villages blurred as they rode through sunset and into the night, their magical mounts requiring neither rest nor water. The only stops they had to make were to rest themselves.

Seven days after they left their cozy home, they arrived at the Citadel of the Dragon Council. Kesler's bloodlines got them immediately before the councilors, and a course of action was plotted.

The dragons were extremely interested in the proposition. They agreed to the terms as set forth by Kesler and his wife, provided the elf and warder chose from the Council's candidates. The couple agreed.

They would have to remain at the citadel for ten days, until all of the candidates could be assembled. In the meantime, a scout was to be sent to the area where they had last sighted her.

If they didn't chase after her, Celestyn hoped she would not shift her position beyond tracking. If she hadn't used a burst of warding energy, they might never have found her at all.

Outside the village of Talleth

Damn, why had she touched the Wardstone? For that
matter, why had she given them a warning and one
month to run?

Because, you idiot, you can't just let them be slaughtered.
They didn't kill your mother directly, just drove her to her
death. They deserve a choice. Before all that they know is
destroyed.

She sighed heavily. This served no purpose. The offer had been made, and to date, she had seen no one leave the village on anything other than daily tasks. Hunters had been deployed to find her, but the wards she was maintaining around her campsite kept out all eyes and stopped them from stumbling into her fire.