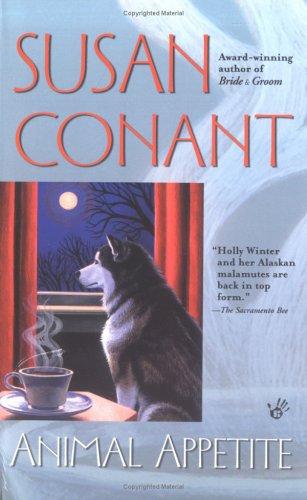 More praise for Susan Conant’s
“absolutely first-rate”* series . . .
“Conant’s dog lover’s series . . . is a real tail-wagger.”
—The Washington Post
“Hilarious.”
—Los Angeles Times
“A fascinating murder mystery and a very, very funny book . . . written with a fairness that even Dorothy Sayers or Agatha Christie would admire.”
—Mobile Register
“A fascinating look at the world of dogs . . . I loved it!”
—*Diane Mott Davidson
“Dog lovers will lap this up.”
—Publishers Weekly
“Toss Ms. Conant a biscuit. If there’s a class called ‘dog mysteries, ’ she’s got a best of breed.”
—Rendezvous
“For lovers of dogs, people, and all-around good story-telling.”
—Mystery News
“Infused with intriguing bits of gossip and information about the insiders’ world of dogs.”
—Pets Magazine
“Conant’s readers—with ears up and alert
eyes—eagerly await her next.”
—Kirkus Reviews 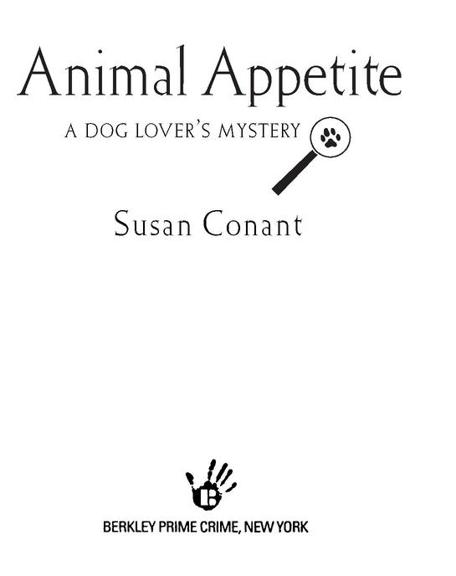 To Kobi and Rowdy—Frostfield Firestar’s Kobuk, C.G.C., and Frostfield Perfect Crime, C.G.C., Th.D.:
Yea, though I walk through the valley of the shadow of death, I will fear no evil: for thou art with me.
PSALMS 23:4
Dog Lover’s Mysteries by Susan Conant
A NEW LEASH ON LIFE
DEAD AND DOGGONE
A BITE OF DEATH
PAWS BEFORE DYING
GONE TO THE DOGS
BLOODLINES
RUFFLY SPEAKING
BLACK RIBBON
STUD RITES
ANIMAL APPETITE
THE BARKER STREET REGULARS
EVIL BREEDING
CREATURE DISCOMFORTS
THE WICKED FLEA
THE DOGFATHER
Blessed above women shall Jael the wife of Heber the Kenite be, blessed shall she be above women in the tent.
He asked water, and she gave him milk; she brought forth butter in a lordly dish.
She put her hand to the nail, and her right hand to the workmen’s hammer; and with the hammer she smote Sisera, she smote off his head, when she had pierced and stricken through his temples.
At her feet he bowed, he fell, he lay down: at her feet he bowed, he fell: where he bowed, there he fell down dead.
JUDGES 5:24—27
ACKNOWLEDGMENTS
Many thanks to Tina Fuller, Kathleen O’Malley, and Carolyn Singer of the Haverhill Historical Society, Haverhill, Massachusetts, for help in researching the background of this book. For encouraging a dog writer’s interest in colonial history, I am especially grateful to John Demos.
Thanks also to Jean Berman, Judy Bocock, Fran Boyle, Dorothy Donohue, Fran Jacobs, Roseann Mandell, Emma Parsons, Geoff Stern, Margherita Walker, and my wonderful editor, Kate Miciak.
The late and greatly mourned Alaskan malamute called Attla (Canadian Ch. Black Ice’s Shear Force, W.T.D.X., W.W.P.D.X.) appears with the permission of his breeders and owners, Shilon and David Bedford, Black Ice Kennels.
CHAPTER 1
I fiirst encountered Hannah Duston on a bleak November Sunday afternoon when my car died in the dead center of Haverhill, Massachusetts. A handsome woman of monumental build, Hannah towered above me. She wore a long, flowing dress with sleeves to the wrists. Her hair fell in waves over broad shoulders and down a muscular back. With her right hand, she maintained what looked like a familiar grasp on a hatchet. Her left arm was outstretched to point an index finger of apparent accusation at my two Alaskan malamutes, who were relieving themselves within the precincts of the Grand Army of the Republic Park. The dogs ignored her. Rowdy, my male, continued to anoint a nearby tree, and Kimi, in the manner of dominant females, lifted her leg on a Civil War cannon directly ahead of Hannah, who stood frozen in her rigid, athletic pose. Although Hannah had every right to object—my dogs were, after all, on her turf—she said nothing. Finding her bland expression impossible to read, I studied the massive stone base on which she stood:
HANNAH DUSTON
WAS CAPTURED
BY THE INDIANS
IN HAVERHILL
THE PLACE OF HER NATIVITY.
MAR. 15, 1697
A bas-relief showed a house from which two women were being led by a pair of men depicted as just what the words said, Indians, as opposed, for example, to Native Americans.
With the dogs now on short leads, I moved to Hannah’s left, directly under her pointing finger. Here, eight children clustered behind a man on horseback. He aimed a gun at a half-naked and befeathered figure. I read:
HER HUSBAND’S DEFENSE
OF THEIR CHILDREN
AGAINST THE PURSUING
SAVAGES.
Continuing my counterclockwise circuit, I found beneath Hannah Duston’s back a trio of people in colonial dress, two women and a boy, and on the ground outside a wigwam, ten prostrate forms rendered in a manner that would not have pleased the American Indian Movement. The words cut into the stone were:
HER SLAYING OF HER
CAPTORS AT CONTOOCOOK
ISLAND MAR. 30, 1697
AND ESCAPE.
The last bas-relief, the one located under Hannah’s hatchet, simply showed two women and a boy in a canoe. The engraved words, too, were simple:
HER RETURN.
In 1697, Hannah Duston had been captured by Indians. She had slain her captors. She and two companions, a woman and a boy, had come back alive. I felt immediately drawn to Hannah: In her place, I thought, my own Kimi, my dominant female, would have done the same. I felt ashamed to find myself the helpless damsel who waited for Triple A under the shadow of Hannah’s bronze figure. My shame increased when my deliverer diagnosed the problem: The fuel gauge had broken. My car had run out of gas.
ADS
15.4Mb size Format: txt, pdf, ePub