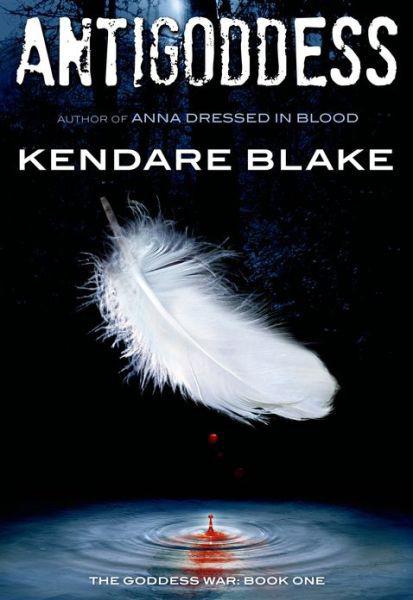 2. The Mother of the Earth

8. The Island of Circe, Redux

11. Messages from the Messenger

12. What Happens on the Road

14. Convergence, or, Welcome to Kincade, Emergency Exits Only

19. The Things You Can’t See Coming

The feathers were starting to be a nuisance. There was one in her mouth, tickling the back of her throat. She chewed at it as she walked, grabbing it with her molars and pulling it loose. Warm, copper-penny blood flooded over her tongue. There were others too, sprouting up inside of her like a strange cancer, worming their way through her innards and muscle. Before long she would be essentially a girl-shaped, walking chicken, constantly plucking at herself.

She reached between her lips discreetly to take the feather out and twist it between her fingers. The movement wasn’t subtle enough; she caught the tilt of his head at the edge of her vision.

“You should stop making out with your owls.”

“We should stop,” he said. The distance of his voice told her he already had.

Her legs kept moving, dark denim hot against her knees, for another five paces just to make a point before she kicked at the dry sand, flinging up dust and small stones and probably pissing off a lizard somewhere.

She tossed him the leather cask without looking and listened to the slow slosh as he drank. He threw it back and she took a swallow, felt another owl feather making its way into her windpipe, a sore, fluttering spot when the water passed over it. The water was unpleasant too. Lukewarm and dust flavored. She stretched her arms and stared up into the sun.

“It’s a good thing we don’t sunburn.” When they left the desert they’d be the same shade they were when they started, despite yards of exposed skin. She glanced at his jeans, his tight t-shirt, and at her own tattooed wrists and thin black tank top. A shadow passed overhead: a buzzard. She snorted. “Look. He probably thinks we’re a couple of lost rave kids. A quick meal. Won’t he be disappointed.”

He turned shielded eyes to the sky and chuckled. “Will he? I wish we had come from a rave. Next time you drag me to the middle of a desert, it had better be for music and glow sticks. Not some goddess who’s probably not even here. Give me that disgusting water back.”

“She
is
here. Can’t you feel her? She doesn’t have the energy to hide.” She tossed the water to him and he crouched down to rest, the leather of water hanging loosely down to the dirt. When he shook his head, a cloud of dust fell out of his close-cropped brown hair.

“I can’t feel anything,” he said. “Except the blasted sun and weariness that shouldn’t be there.”

She watched him. Hermes, the god of thieves, an eternal seventeen year old bitching like an old man. It was almost funny. It would have been, if they weren’t both dying, and he hadn’t been so thin. The muscles in his arms were becoming sinewy, and his cheeks had hollows they hadn’t had before. He must’ve lost five pounds just since they reached the desert.

“You should eat something.” She knelt in the dirt beside him and took off her pack. There was dried beef inside and fruit.

“This is humiliating,” he muttered as she handed him the food.

“Death without glory always is. Of course, I never thought it would happen to us.” She swallowed again, and the pin of the feather poked her. She took another drink of water. In the old days, she would have been able to wish the feather right out of existence, to burn it up with a thought, into nothing but a hiss and a curl of smoke. It was still hard to believe that this would be her end, that it would be so quiet and slow, her lungs filling up with feathers. It would be like breathing through a pillow. She wouldn’t even be able to scream.

“We should have seen it coming. It’s not as though it hasn’t been foretold and written about. The twilight of the gods.” He scraped up a handful of dust and tossed it into the air. He arched his brow.

“Everything born must die, Athena.”

“So says convention.” She pushed herself back up and squinted into the harsh light. For as far as she could see everything looked the same. Cactuses cropped up in strange little families. Tumbleweeds rolled along on their way to nowhere. It was flat, and barren, and the last place she wanted to be: dying in the middle of a desert.

She held out her hand and pulled him up.

“Everything born must die,” she repeated. “But I sprang fully formed from our father’s head. So that doesn’t exactly count, now does it?”

It was an odd little scene, a pocket of stillness in the middle of the cafeteria shuffle and noise: two boys at a corner table, watching a silver coin flip end over end. The girl across from them called it in the air, “Heads” or “Tails,” her voice indicating it was far less interesting than their bug eyes suggested. She’d called it correctly thirteen times in a row. She could’ve called it a hundred more.

“How are you doing this?”

Aidan Baxter caught it and slapped it down against the back of his hand. He showed it, tails side up; the silver eagle shone under the glare of the fluorescent lights.

One of the boys held his hand out.

They studied it curiously, turning it in their fingers, scratching the edge, tapping it on the table. They flipped it themselves a couple of times. But it was just a quarter.

“There’s got to be something,” the taller boy muttered. He looked at Cassandra like it might be her. Something that she was doing.

But there was nothing special about her. No mystical tell, no ethereal eyes. Just normal, brown, blinking ones. He looked at her brown hair, hanging down around her shoulders. Too average. Not even a streak, no punk-rock pink or gypsy ribbons. He turned toward Aidan.

No one ever bought the magic. They always thought it was a trick, or an angle. Some boring explanation so their world could keep its dimensions and still be explained by the ABCs. By laws and math. That was the way they wanted it. If they learned the truth, they wouldn’t look at her with wonder. They’d be disappointed. Maybe even have her stoned to death.

“Seriously?” She watched the coin spin and called it again. She could tell them she was counting the spins. That it wasn’t much different than scamming a game of poker. They’d believe that. “Seriously, I’m a genuine, bona fide psychic. Always have been.”

She glanced at Aidan, and he smiled.

“It’s true,” he said as Cassandra called “Heads” almost before the quarter left his fingertips. “Pretty annoying, actually. I could never cheat on her and get away with it. And don’t get me started on the things she sees before they happen.”

Cassandra stifled a laugh. Mentioning her visions was farther than they usually went. But it wouldn’t matter. The skeptical muscles in the freshman’s face just clenched harder. They were muscles she knew well.

Aidan snatched the coin back. “So. Think you can beat her?”

For a second the boys’ mouths opened and closed like fish and Cassandra thought they might try. Sometimes they did. Once, a girl managed to call it right five times before she missed. Maggie Wegman. Just a petite blond girl who sang in the choir and played volleyball. Cassandra watched her sometimes in the halls, wondering if the five times had been a fluke, or if Maggie might be a little bit psychic too.

Might be nice if she was. We could start a club for freaks. I could be like Professor X.

She smiled to herself, and shook her head when Aidan gave her a weird look.

“Don’t waste your time.” Sam Burress winked at her from across the table, his brow arched beneath his black stocking cap. She hadn’t thought he’d been paying attention. “Nobody beats Cassandra. Half the school’s lost money to these two.” He gestured between her and Aidan with a carrot stick before biting through it. “Better just pay up. Get your friends to play and she’ll give you a cut.”

The boys opened their wallets and forked over ten dollars apiece.

“This isn’t hard-earned allowance money or anything, right?” Cassandra asked as she took it.

“Nah,” said one of the boys with a shrug. He had a sweet face and a mop of brown hair. “It’s a really cool trick.”

“Thanks. I stayed up for three days watching Criss Angel to figure out how to do it.”

His face lit up, relieved by the explanation. “I knew I saw this somewhere.” He picked up his plastic lunch tray and nudged his friend to leave, back to their own table. Before he left, he winked at her. No hard feelings, and now when they passed each other in the hall, they’d nod.

“Why’d you say that?” Aidan asked after they’d gone.

Cassandra shrugged. To make them feel better maybe. Or maybe just to get the wink. Some goodwill instead of wary glances later on.

“Your showmanship is slipping. Do I need to get you a crystal ball and a bunch of gold jewelry?” He slid closer to her on the bench, blue eyes dark and devilish, then picked up her hand and kissed it. “They’re going to start thinking it’s me. That I’ve got a trick to tossing it. Maybe you should breathe heavy, or roll your eyes back in your head.”

Cassandra snorted. “What am I? Some guy at a carnival?” She shoved him with her shoulder. “You really love this about me, don’t you?”

“I really do.” He kissed her temple, like that was where it came from. “Amongst other things.” He turned away to take a bite of bland lunchroom burrito and to scoop the cherries out of his fruit cup into Cassandra’s. The hood of his gray sweatshirt was over his head, covering his golden hair just like it always was at school unless a teacher made him take it down for class. He looked like a street urchin, sitting there with his knee tucked up, scarfing his food.

But a good-looking street urchin.

Cassandra reached to touch his cheek.

“No PDAs while I’m eating.” Andie Legendre swung her leg over the bench opposite, disrupting Sam and the rest of the table. They clucked and rustled like birds disturbed on the roost as they moved down. “You’ll appreciate that rule when I have a disgusting boyfriend of my own.”

Mrs. Jeffries Defends Her Own by Emily Brightwell
Bought and Bound by Lyla Sinclair
In the Dead of Night by Castillo, Linda
The Orchard by Charles L. Grant
Gale, Avery - Jenna's Submission [The ShadowDance Club 2] (Siren Publishing Ménage and More) by Avery Gale
Blood Magick by Roberts, Nora
Cody by Kimberly Raye
The Gods of Garran by Meredith Skye
Her Mother's Daughter by Marilyn French
Light Boxes by Shane Jones