APOCALYCIOUS: Satire of the Dead 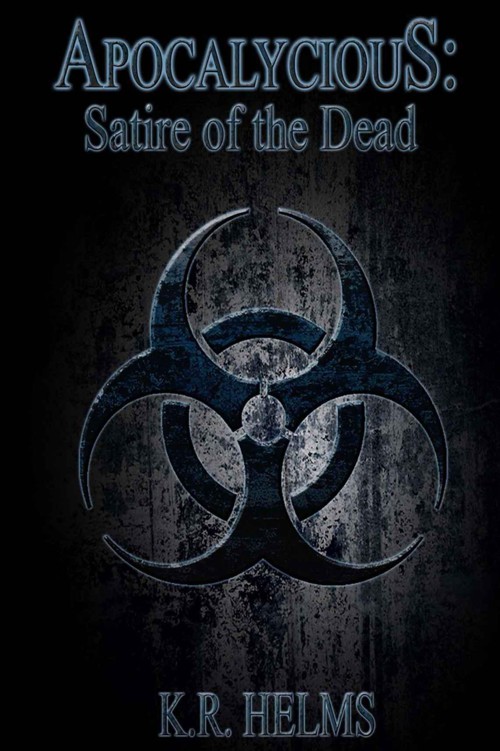 Satire of the Dead

Other Books by K.R. Helms

For Sean Helms, Becky West and Tony Prouty- their proofing, editing, encouragement and friendship have been invaluable; also to Daniel Akers for his cover art.

Apocalycious: Satire of the Dead. Copyright © 2012 by K.R. Helms. All rights reserved. No part of this book may be used or reproduced in any manner whatsoever without written permission except for the case of brief quotations embodied in critical articles and reviews.

Prologue Part 1 - The man with one green eye

One year
prior to plague

Morning filtered weakly through the bedroom window, sending the shadows retreating, fading, and silently dying as the glow of a new day consumed the darkest secrets of Earl Emerson. He awoke to that rebirth; the taste of the previous night’s little deaths still in his mouth.

The bed creaked as he swung his legs over the edge of the mattress. He swept his hands through his hair with an audible groan. He reached for his shirt that lay in a ball on the floor at his feet and fished out his cigarettes from its pocket. He tapped one from the pack, placed it between his dry lips, and lit it with his Zippo. He inhaled the smoke and held it in his lungs for a few seconds to get the stimulant into his bloodstream. His lungs felt like charcoal briquettes from smoking too much the night before, and he made a light wheezing sound as he inhaled. He always smoked too much when he drank, and he drank a lot. Earl exhaled and closed his eyes.

He could hear the chorus of birds and the sounds of traffic outside the window of his apartment; it was a distinctly ugly sound.

He looked over his shoulder at the sleeping form behind him and tried to remember her name,
was it Josephine?
He wondered briefly, and then decided that it really didn’t matter.

He scanned the dim bedroom with his blurry eyes. The room reeked of cheap booze, cheap sex and cheap perfume. He watched in fascinated disgust as a roach skittered up the woman’s thigh and she giggled in her sleep. For some absurd reason, it reminded him of a dog dreaming that it was chasing squirrels. The roach continued its trek and stopped atop one of her breasts. He watched as the nipple slowly hardened, but the roach didn’t seem to mind the extra boost; it just sat there like a mountain climber resting at the peak, taking in the vista. Earl imagined that the view must be breathtaking.

He took another drag on the cigarette, and immediately exhaled with a cough when he felt his stomach churning and his mouth salivating; sure signs of re-tasting lasts nights overdone beverages. Earl grabbed the bottle of Old Crow off the nightstand and finished the last few shots in one quick chug.

It seemed to quiet the nausea.

Earl stood and walked to the bathroom toward the shower. Along the way he felt the wet squish of latex as he stepped on a spent condom from the previous night's festivities. It stuck to the bottom of his foot and he peeled it off with a sigh and an expression of disdain. It was odd how something that had seemed so urgent the night before could suddenly transform into something as disgusting as this. He tossed it absently over his shoulder and heard it land with a moist smack. Curious, he turned and saw that it had landed on the girl’s stomach, sending the multi-legged hiker into hiding from its lofty perch. The idea of the insect finding refuge in a warm, fleshy cave gave him the creeps and try as he might, he couldn’t quite get the visual out of his head.

Earl continued on toward the bathroom. He opened the medicine cabinet and grabbed a bottl
e of Xanax, dry-swallowing two of the sectioned bars and then repeated the process from two other brown prescription bottles. The doctors had told him that the pills would help him with the problems he was having. The doctors, thus far, had been full of shit. He still hated himself, the headaches were still there, and there were moments where he couldn’t remember who he was. Those lapses of confusion filled his heart with dread and his mind felt as if he were drowning, resurfacing and drowning again. He blew air out of his nostrils; it was as close to a laugh as he could manage.

He turned the water on in the shower, and gave it time to warm up as he leaned over the sink and studied the face that studied him. The man that stared back at him wore a quizzical expression, lined with anxiety and for a moment he didn’t recognize himself. These brief interludes of uncertainty had been becoming more and more frequent and his shrink had mentioned the word Schizophrenia on more than one occasion. His hair was smashed over to one side; his green eyes were dull and bloodshot. There was lipstick smeared on his cheek and he figured that there was more on various other parts of his anatomy. He cringed when he saw the huge hickey on the side of his neck. He loathed those adolescent mementos. The cigarette hanging from his lips had lost its allure, so he flicked its ashen remains into the toilet and it extinguished with a hiss.

He shook his head; a grimace on his face and stepped into the shower.

Violet, that was her name,
he suddenly remembered.
Where did I get Josephine?

He washed his entire body with a worn out, rust-stained wash cloth that had been white once upon a time, and Lava soap, then decided that it would probably be a good idea to give the ol’ genitals an extra good scrubbing.

The scalding hot water instantly shook him from his melancholia as only physical pain can, and he savored the pain until the water heater ran out of steam. He quickly dried off, and walked naked into the bedroom.

Violet was gone. That was good; it was always awkward the morning after. Trying to find a reason to get rid of her without sounding like a self-serving bastard always proved to be a tedious endeavor.

She must not have appreciated the projectile condom. She had stretched the fallen Trojan over his pack of cigarettes, and laid it for him to see on the nightstand like a Christmas present under the lamp. A small troop of roaches were already examining the carcass, their long antennae flicking to and fro. Earl shook out his jeans to avoid any insect hitch hikers, and slid them on. Earl knocked the pack of smokes into the trash can.

He
pulled his wallet out of his back pocket and found that his cash was intact. She might be a tramp, but at least she wasn’t a thief. Then again thirty-six bucks wouldn’t have gotten her very far and would have probably seemed cheaper than free.

Thus far, the plan of the day was to dodge his girlfriend…he paused again as he rifled through the mental filing cabinet for her name.

“Damn it,” Earl whispered to the roaches, he couldn’t for the life of him remember his girlfriend's name. He frowned and questioned the insects “Josephine? Is that her name?”

He was beginning to feel more alive, but he wasn’t sure if that was a good thing or not. The rest of the weekend was free. He could sit around in a drunken stupor with a bottle of hooch, a stomach full of pills, and play strip solitaire or something else equally banal, or he could do something different for a change.

He put on a tee shirt and a pair of work boots and walked outside to where his ‘78 Ford flatbed was parked. First on his agenda was to pick up a pack of smokes and then possibly push his piece of shit truck off a cliff.

He drove to the convenience store a couple miles down the road and bought three packs of generic cigarettes, a bottle of Coke, a lottery ticket and two instant scratch-off tickets. He scratched the instant tickets in the musty confines of his pick-up truck and then threw the losers on the floor of the already littered cab.

Earl really wasn’t that disappointed. He was used to losing.

He ripped the cellophane wrapper from the pack of generics and fired up a butt. It crackled and popped as the smoke filled his lungs.

He adjusted the rear view mirror and checked his face as he drove. He knew that many considered him a Narcissist, but mostly he was just checking to see if it was
himself
staring back from the looking glass.

Earl took his eyes from the dead man in the mirror, and saw a deer with a broken hind leg limping into his lane from the tree-line that ran parallel.

Earl made a hissing sound through his clenched teeth as he yanked the wheel to the left, barely avoiding the deer in the road, but he could not escape the concrete barrier that divided the highway. His truck slammed into the obstruction, crumpling the front end of his truck as the impact jettisoned him through the windshield.  The tiny particles of broken glass floated before his eyes, catching glints of sunlight in their prism and he smiled as he sailed through the air, thinking that the snow sure was pretty.

Earl awoke in the hospital knowing that something wasn’t quite right. He felt numb and still had the taste of metal in his mouth. He lifted his right arm and ran his hand over his face. There were bandages covering the entire right side of his face. That explained why his vision seemed limited. He tried to sit up and felt something tear in his right side. He held in the scream and heard his heart monitor go off beside him. He wondered if he was having a heart attack and laughed.

He was still laughing when the doctor entered the room.

The doctor had left him with the gift of Morphine and the sum of his array of injuries. Four broken ribs, a punctured lung, broken collar bone, wrist and femur, three hundred stitches and worst of all, he had lost the vision in one eye. The Morphine couldn’t give back what he had lost, and neither could the doctors.

He was vaguely aware that his girlfriend had entered the room, taken a seat beside the bed and held his hand in hers. He still couldn’t remember her name, but he was reasonably sure that it was French. Worry and love was etched on her face….but there was something else there too, something different.

His vision swam and he drifted into unconsciousness.

He wasn’t sure how long he had been out, all he knew was that ‘
what’s her name’
sat in the same chair as she had when he fell asleep. She was still holding his hand.

She reached over to him and smoothed his hair with the tips of her fingers. “Good morning.” she said, offering a smile that seemed about as genuine as a three dollar bill. He started to smile, and then suddenly remembered the conversation with the doctor and the smile wilted from his face.

“It’s alright,” she said in a soothing tone of voice. She looked like she was half stoned, but she never did any drugs. From what Earl could remember she was always a good girl.

The World Was Going Our Way by Christopher Andrew
Talons of Scorpio by Alan Burt Akers
Beautiful Lies by Lisa Unger
Cruise by Jurgen von Stuka
Tied by Emma Chase
Unleashed by Jami Alden
A Week in Paris by Hore, Rachel
It's Alive by S.L. Carpenter
Gryphons Quest by Candace Sams
Men from the Boys by Tony Parsons