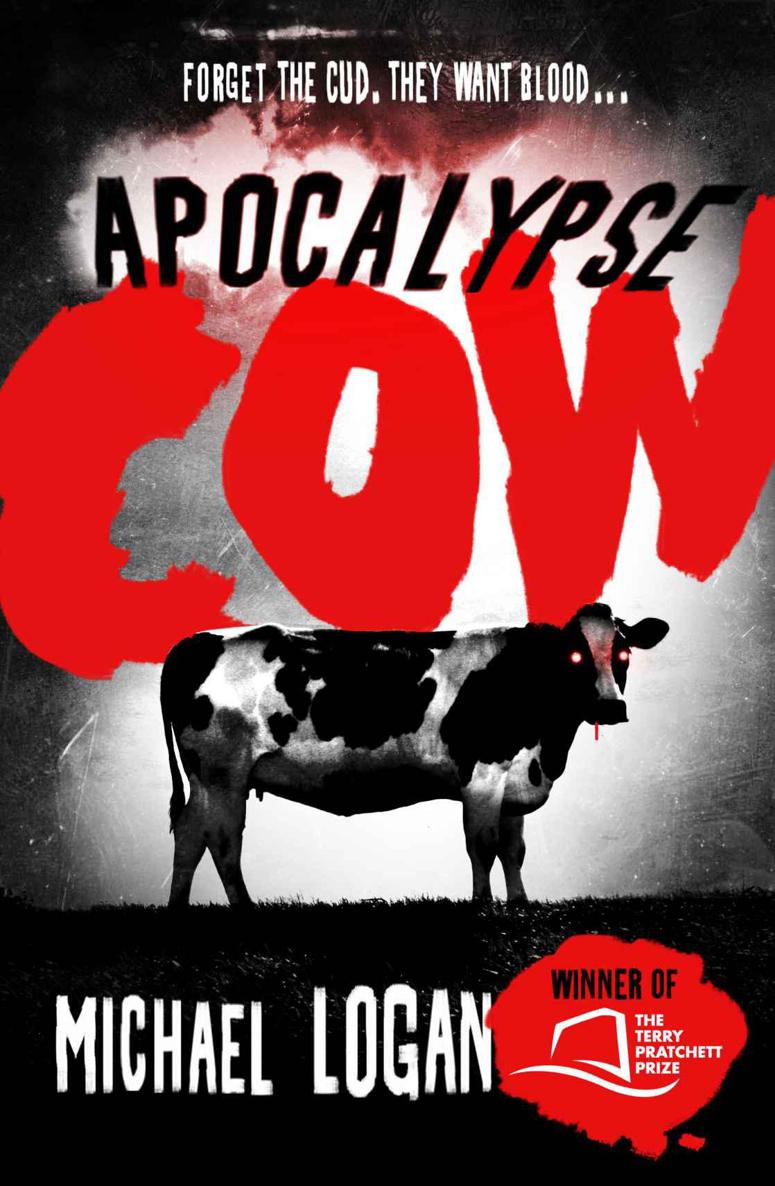 It began with a cow that just wouldn’t die. It would become an epidemic that transformed Britain’s livestock into sneezing, slavering, flesh-craving four-legged zombies.

And if that wasn’t bad enough, the fate of the nation seems to rest on the shoulders of three unlikely heroes: an abattoir worker whose love life is non-existent thanks to the stench of death that clings to him, a teenage vegan with eczema and a weird crush on his maths teacher, and an inept journalist who wouldn’t recognize a scoop if she tripped over one.

As the nation descends into chaos, can they pool their resources, unlock a cure, and save the world?

1. The Beginning of the Rend

4. In the Belly of the Beast

11. These Little Piggies Went to Market

13. Letting the Cat Out of the Bag

In memory of Andrew Logan and Kristian Kramer

We were looking for books set at any time, perhaps today, perhaps, we imagined, a today in a world where two thousand years ago, the crowd shouted for Jesus Christ to be spared, or where in 1962, John F. Kennedy’s game of chicken with the Russians went horribly wrong. We hadn’t considered the possibility of a world in which cows became ruthless, libidinous killers, but it is a tribute to Michael Logan’s imaginative powers that he was able to do so, and serendipitously, to come up with one of the best bovine puns in literary – or should that be cinematic? – history.

The key to creating an alternative world is that it has to be believable – on another variant of Earth, there might be some unusual goings-on, but you still recognize that it is Earth. The physics will be the same as ours: what goes up must come
down
, ants are ant-sized because if they were any bigger their legs wouldn’t carry them.
Apocalypse Cow
has stayed true to that – the world it portrays is so slightly removed from our own that it could almost be teetering on the crotch of time, threatening at any moment to change its mind and tip down our own trouser leg. Think about that the next time you tuck into a steak.

The beginning of the rend

The man in the sharp blue suit stood atop a wooded hill, dangling an expensive pair of leather shoes from one hand, and watched grey smoke belch from the burning abattoir below. A dozen figures in white biohazard outfits ringed the grubby old building, flame-throwers and automatic weapons pointing casually at the ground. He dialled a number on his mobile as the report of cracking glass echoed across the small valley. A great tongue of flame licked from the freshly broken window to caress the underside of the abattoir’s gabled roof.

‘It’s dealt with,’ he said with no preamble.

‘Are you sure?’ a nervous voice asked in response.

The wind changed direction, carrying tendrils of smoke to the watching man’s nostrils. It stank of burning flesh. ‘I’m sure.’

‘If even a single one of those things escaped, we’re finished. And so is this country.’

‘Stop being such a worrywart. They’re all dead, and currently getting nice and crispy in the barbecue.’

‘What about the abattoir workers?’

‘All dead too, save for one lucky individual. We’re bringing him in.’

‘Any idea how the virus got out?’

A heavy sigh flooded the mobile’s tiny speaker. ‘What a balls up. Just make sure you’re gone before the emergency services arrive.’

‘That won’t be a problem,’ the man in the suit replied.

He hung up and looked over the treetops below, to where the long abattoir approach road branched off from the main thoroughfare linking Glasgow with a spray of rural towns. Two fire engines and three ambulances were bunched together, lights flashing furiously, and fruitlessly, at the jackknifed lorry blocking their path.

‘Oh, I’m so good at this,’ he announced to the empty hillside.

He set off down the grassy slope to herd his clean-up team into the waiting Chinook helicopter that would ferry them the few miles back to the facility. Halfway down, his foot sank into something squelchy.

‘Shit,’ he stated, pulling his foot out of an enormous cow pat.

His first concern was for his H. Huntsman suit, which he hadn’t had time to change out of after the call came in from the monitoring team. Fortunately, his foot hadn’t gone in deep enough to taint the hem of the silk trousers, and he’d had the foresight to remove his shoes for the clamber up to the viewpoint. Only the sock was ruined. He could live with that.

Disaster averted, he considered the significance of the cow
pat
. Pools of dark blood slicked the surface of the generous dollop of dung, which the coated sole of his foot told him was still warm. He raised his head, and scanned the tree-line. The smoke was growing thicker and darker as the flames consumed flesh, plastic, wood and metal. It drifted between him and the wood, obscuring his view. He thought he saw a bulky body moving among the tree trunks, but when it melted away he dismissed it as a clump of smoke. Then he heard it: a long and shuddering moo, emanating from deep within the trees. The moo came again thirty seconds later, quieter this time. It was moving away, towards the rolling fields where thousands of dairy cows grazed in blissful ignorance, and the suburbs beyond.

‘Oops,’ he said, and hopped down the hill as fast as his unsullied foot could carry him.

Of rice and Zen

Geldof Peters had never encountered a hemp plant. If he did he would kick, punch and stamp on it until it lay in a ruined pulp beneath his shoes, which were made of hemp. The ignominy of being beaten to death with a product made from the corpses of its brethren would escape the plant, but he would revel in it.

While an innocuous plant may seem undeserving of such vitriol, Geldof had good reason for his vendetta. For as long as he could remember, he had been dressed in hemp. His shirts, trousers and underwear were all made from the fibre, to which he was horrendously allergic. Every part of his body itched furiously and his neck and wrists, chafed by collar and cuffs, were ringed with a scabby rash.

He laid the blame at the door of his mother, who was upstairs pottering around as he sat on the sofa reading the latest Iain M. Banks sci-fi epic and trying not to claw himself raw. He had tried to convince her that the rash was hemp-induced. She refused to believe him. Instead of going to a
doctor
like a sensible parent, she had dragged him to her spiritual advisor – a wizened old man who had swapped the soaring mountains of Nepal for Cumbernauld, where the only thing soaring into the sky was the ugly 1960s concrete block of a shopping centre. The mystic had diagnosed a severe case of spiritual malaise and advised him to seek his true path in life. Geldof had been hoping for some kind of cream.

Non-hemp solutions were unacceptable to Fanny Peters, environmental campaigner and humongous pain in the arse. Leather and suede, by-products of the meat industry, were forbidden in the vegan household. Nylon was out because it was part of ‘humankind’s relentless march away from Mother Nature’ and denim was deemed too mainstream. Geldof was allowed Fairtrade cotton, but since Fanny had a deal on hemp clothing from one of her friends, he only owned a few cotton items – which had anyway become contaminated by hemp fibre and were almost as bad.

It was all right for her. She wasn’t called ‘Scabby Peters’ at school. She didn’t suffer the embarrassment of scratching her neck in class and having a large piece of skin fall off, only for Malcolm Alexander to spear it on a pencil and parade it around the squealing girls. She wasn’t the one who couldn’t get a partner in Scottish country dancing class and had to stumble around with Mrs Flaxton, the geography teacher-cum-dancing expert, who reeked of mothballs and gin.

While the rash was the main target of abuse at school, it wasn’t the only feature to provoke teasing. Geldof wore glasses, had been born with the curse of ginger hair, and was incredibly scrawny due to his habit of tipping half of his unpalatable vegan meals down the toilet when his mother
wasn’t
looking. These invitations to bullying negated the fact that the rest of his face was rather well put together: his eyes were a shade of blue that would be called ‘icy’ or ‘piercing’ if anybody actually bothered to look beyond the obvious, his nose was on the cute side of pug, and he sported dimples that had prompted unrestrained, and unwelcome, cheek-tugging by passing middle-aged ladies when he was younger.

Once you added in the fact he was English in a country of rabid English-haters, had been saddled with a ridiculous name and was in the habit of carrying around far more books on maths than strictly necessary, it was clear why Geldof was miserable, even by pubescent boy standards.

Life had its small consolations, though, and one of them was baiting Fanny at every opportunity. As his mother’s calves appeared at the top of the stairs, Geldof fell to his knees, clasped his hands and began to pray loudly with his eyes squeezed shut.

Fanny sighed when she stopped in front of her son. ‘Praying again. You know Christianity is responsible for the worst atrocities to disgrace this planet.’

Geldof broke off to say in a neutral tone, ‘I’m just trying to experience all religions to see which one fits. You told me I should stay open-minded about my spirituality.’

Pandora's Keepers by Brian Van DeMark
Return of the Prodigal Son by Langan, Ruth
A Brief History of the Celts by Peter Berresford Ellis
Back in the Lion's Den by Elizabeth Power
Tailor of Inverness, The by Zajac, Matthew
Pickle Pizza by Beverly Lewis
Bucking the Tiger by Marcus Galloway
In the Teeth of the Wind by Charlotte Boyett-Compo
Anything for Profit 2: Nothing to Lose by Floyd, Justin Amen
Gang Leader for a Day by Sudhir Venkatesh