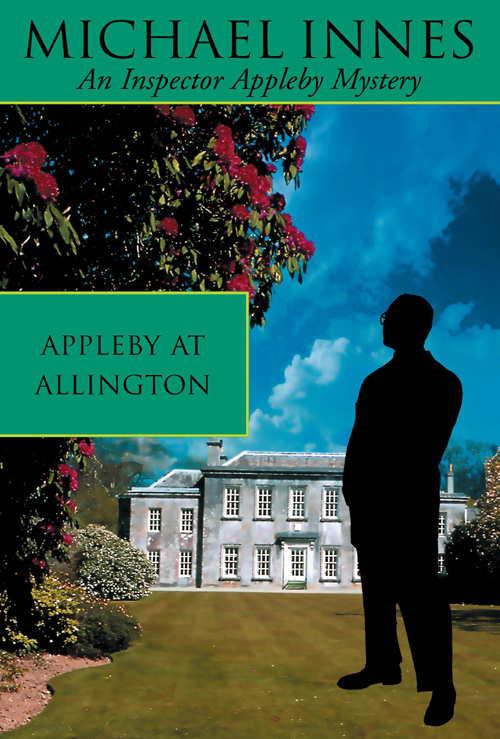 This is a fictional work and all characters are drawn from the author’s imagination.
Any resemblance or similarities to persons either living or dead are entirely coincidental.

‘It’s wonderful to have a little peace and quiet for a change,’ Owain Allington said. ‘And particularly when it takes the form of a congenial
tête-à-tête
.’

Allington was a handsome man in his late fifties. He cultivated – one had to call it that – a slightly old-world air, and every now and then seemed to remember to produce formal courtesies of this sort. But Sir John Appleby, sitting on the other side of the magnificent fireplace in his host’s library, thought it unnecessary to utter any articulate response to this particular compliment. It struck him as being rather by way of afterthought. Allington looked tired, and perhaps he was regretting not having decided to pass this first tranquil evening in solitude. But he had invited Appleby to dinner –
en
garçon
, since he was a bachelor and since Lady Appleby would not get back from London until next day.

It had been an excellent dinner, for what that was worth. And Owain Allington, whom Appleby scarcely knew, had proved quite an entertaining companion. He did a little too much of the talking, perhaps, but usually remembered to drop in appropriate appeals for comment or judgement. He possessed, too, odd information on a surprising variety of people. The evening had worn away rapidly, and the hour was now late.

‘Of course,’ Allington was saying, ‘I still feel something of a stranger in these parts, even although I have a very tolerable reason for doing nothing of the sort. Certainly I’m still sadly vague about some of my neighbours. Yourself, for instance, my dear Sir John.’ Allington paused on this urbanely formal manner of address. ‘I would rather guess that your people have lived round about here for a good many generations?’

‘Good Lord, no.’ Appleby spoke without impatience, although he realized that Allington had been producing a mere idle pretence of ignorance. ‘It’s not my part of the world, and I’m not that kind of person. But my wife inherited our present house from an uncle, and we came to live in it when I stopped being a policeman.’

‘A policeman? But yes, of course. Scotland Yard. I know all about that.’ Allington didn’t speak particularly convincingly. ‘You must have the devil of a lot of yarns about that sort of thing. Get you to spin some of them one day, I hope. You came up on what might be called the criminal side, I think? Do I express myself oddly? I do look forward to talking a little about it, at some time or other. Criminology’s been quite a thing with me. But about country life, and so on. As I was saying, more or less, I’m a new man myself – even if it’s in a manner of speaking, eh?’

Appleby, who was finishing a second cigar – and he didn’t really care for smoking two cigars – again said nothing. Outside in the soft summer darkness, an owl hooted – a lonely sort of owl, for it had been the first sound for what seemed hours. Allington Park was pitched very much in a rural solitude.

Allington Park
. The name spoke at once of the sense in which Owain Allington was
not
a new man. One of his direct forbears, Rupert Allington, had held Allington Castle for King Charles. When Oliver Cromwell had first reduced and then demolished the place – which he did very thoroughly – the ruins and surrounding estate had for some reason passed out of the family. There was, indeed, enough of the castle left to constitute a very respectable picturesque feature in the landscape. It had never been quarried in, one had to suppose, except in the interest of a surreptitiously achieved hovel or pig-sty. And when the Georgian mansion in which Appleby was at present sitting had been built – it had been in the first years of the nineteenth century – a mouldering medieval pile just across one’s lake had been very much something to be preserved. Mr Osborne had preserved it.

Mr Osborne had been a successful tallow merchant, very wealthy, and laudably anxious to make his way among the gentry. His name must have helped, since it had been rather a respectable one since Queen Elizabeth’s time or thereabout. And Osbornes had been owners of Allington until quite recently. Appleby didn’t know why they had parted with the place. There were still some of them round about – living in reduced circumstances of a not very harrowing sort.

As for Owain Allington, he had simply turned up and bought the house and estate – in the romantic manner of Warren Hastings (Judith Appleby ironically said) returning to possess himself of his ancestral Daylesford on the strength of a modest fortune picked up in India. Not that Allington had been a nabob. He was some sort of scientist by calling, and Appleby had a notion he had achieved considerable eminence. But science – or perhaps merely a pertinacious application of the scientific mind to the study of the Stock Exchange – had enriched him in what seemed rather a surprising degree. And here he was – established in his ancestral home and as a small landed proprietor. It was – Appleby reflected uncharitably – the successful Englishman’s chosen route to going soft.

‘My position in the country, and all that, couldn’t be called equivocal, I suppose.’ Allington spoke as a man amused, and almost as if divining something of Appleby’s thought. ‘A walk round the tombs in the parish church will settle that. The Osbornes, you know, had to build themselves a brand new and extremely Gothic-looking vault for the repose of their bones. In the church itself we take up a lot more room than the congregation does. Crusaders, and all the rest of it. Still, I’ve shoved in, and am a newcomer among all sorts of folk whose great-grandfathers walked at a plough-tail. There’s mild entertainment in it.’

‘No doubt.’ Appleby reflected fleetingly on the weird class-consciousness of his countrymen. ‘But I suppose there are duties as well as diversions. The estate must take a certain amount of time, surely. And I gather you’re a magistrate, and do a good deal of entertaining, and so forth. Don’t you regret the time it takes from your real work? You’re a younger man than I am, Allington, by a good way.’ Appleby was conscious of slight challenge in his own tone. He hadn’t really decided whether he cared for his host or not.

‘I’ve retreated into a backwater, you mean? It may be so – and I confess, my dear fellow, that I do sometimes find myself a little casting about for something to use my brains on.’ Allington spoke lightly, and with an effect of increasing amusement. ‘But I assure you that even a country gentleman can follow scientific pursuits. And I get a great deal of fun out of quite small projects. Perhaps that’s shameful to confess. But there it is. Do you know? It even quite entertained me to take an active part in rigging up all that rot.’

‘Yes, but praise the Lord it’s over, all the same. I’ll never allow it again, my dear Appleby. Everybody was upset by it, one way or another. Even Rasselas – and he’s of a reposeful nature.’

Sweet Revenge by Andrea Penrose
The Abduction of Kelsey by Claire Thompson
Dear to Me by Wanda E. Brunstetter
The Book of Love by Kathleen McGowan
Written in the Stars by Ali Harris
Saving Saffron Sweeting by Wiles, Pauline
The Complete Yes Minister by Eddington, Paul Hawthorne Nigel
Mad Hope by Heather Birrell
The Last Street Novel by Omar Tyree
Sweet Deception by Tara Bond