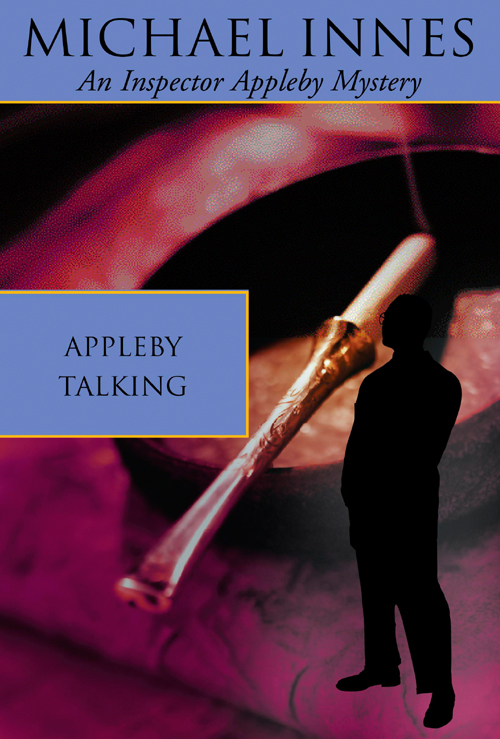 This is a fictional work and all characters are drawn from the author’s imagination.
Any resemblance or similarities to persons either living or dead are entirely coincidental.

“My first case?” Appleby looked at his friends with the appearance of considerable surprise. “Do you know that nobody has ever asked me about that before? It’s always the latest case that people are curious about.”

The Vicar nodded. “News is more popular than history nowadays. It is only one symptom, I fear, of a deplorable–”

“Precisely, my dear Vicar.” The Doctor’s interruption was hasty. “How right you are. But let Appleby tell us his story. For I can see that there is a story. That manner of squinting into the bowl of his pipe is an infallible sign of it.”

“My first case was quite a small one.” Appleby finished squinting and began to puff. “I’d say about eighteen inches by ten. And certainly not more than three inches deep.”

The Vicar looked bewildered. “This case was about a
case
?”

“To be exact in the matter, I was just fourteen – a solemn child with somewhat precocious intellectual tastes and no notion of becoming a policeman. At thirteen I had been a geologist, littering my room with sizable chunks of any hills I could get within hammer’s reach of. At fifteen I was going to be a tremendous authority on comparative religion. But at fourteen my line was the fine arts. I spent my holidays in the National Gallery or the Tate, and I particularly liked the delightful business of paying a shilling, and sixpence extra for a catalogue, in order to look at the picture-dealers’ shows in the West End.

“This case that I’m telling you about contained a dozen exquisite pieces of jade, and it was exhibited on a table in the inner room of the Ferrarese Gallery, off Bond Street. The place may be familiar to you. It certainly hasn’t changed from that day to this, and it had then, as it has now, the habit of running two exhibitions concurrently. I had gone there to look at Impressionists in the larger rooms. The jade and other Chinese stuff in the room at the back wasn’t part of my programme for the occasion. I’m sure I
had
a programme, laid out with admirable neatness, and that it indicated the study of Oriental Art as not due to begin until six weeks later.”

The Doctor chuckled. “You may have been a little prig, Appleby. But you were a systematic one. And system was to lead you on to sterner things.”

“No doubt. But I remembered that I had paid my shilling for
both
shows, and so I did make a quick survey of the Chinese things. The Impressionists had drawn a big crowd, but there was only a handful of people here at the back. I took a look round, and then stuck my head into the room lying farther back still. It’s not much more than a large cupboard, where they sometimes exhibit a single picture or work of statuary under a rather
recherché
lighting. I don’t remember what was actually on show there on this occasion, but I do remember the man with the red beard. Indeed, he is one of the three or four human beings whom I am quite certain I shall never forget.

“He was alone in the little room – an elderly man of shabby but cultivated appearance, muffled in a shapeless old ulster, and carrying under his arm a sheaf of papers and an enormous folio volume in an ancient leather binding. I looked at the folio with great respect – I had a large reverence for learning as well as the arts, and here clearly was a scholar in the grand tradition. I also looked at the red beard. There was something fascinating about it. Indeed, I must positively have stared, because I remember suddenly recollecting my manners, and turning in some confusion to whatever artistic object was on view. When I looked at the scholar again a rather startling thing was happening. He was picking up his beard from the floor and hastily replacing it on a perfectly clean-shaven face.”

Appleby paused, and the Vicar rubbed his hands. “Capital!” he said. “Here was swift observation, my dear Appleby, leading to your first triumph. Proceed.”

“I was a bit staggered, and no doubt rather scared. It was with a feeling that there was safety in numbers that I retreated to the crowd milling round the Impressionists. But my mind was moving swiftly. At least that was my own instant conviction in the matter, since I had read time and again how Sexton Blake’s mind invariably worked swiftly on similar occasions. It was true that any passion for that eminent detective already lay – or seemed to lie – several years behind me. But of course, as the psychologists assure us, past obsessions rise up again in traumatic situations.

“Conceivably my swift thinking might have led in the fullness of time to the formulating of some line of positive action. As it was, events again took the initiative. I became aware that somebody was shouting, and a second later an attendant or commissionaire rushed out of the inner room. I caught the single word ‘jade’. And at that my tender intellectual faculties really
did
move with tolerable speed. I saw the whole thing in a flash – or
almost
the whole thing. I knew the villain – for are not villains invariably disguised? And I knew just what he had done – for would not the showcase with those priceless little jades fit exactly into that assuredly bogus folio volume? It was a tremendous moment. And yet more tremendous was the moment immediately succeeding it. For there was the red-bearded man not six paces in front of me – and making unobtrusively for the street.”

Appleby again halted in his narrative – this time to tap out his pipe. It might have been the heat of the fire that had brought a slight flush to his features as he sat back again.

“I gave a great yell. At least I thought I did – and was a good deal surprised to hear nothing. It was like the sort of dream in which you try to cry out and no sound comes. But a second attempt was more successful. Indeed, it commanded the instant attention of every soul in the place. ‘That’s him!’ I yelled – and I don’t doubt that I was horridly conscious of the bad grammar even amid the very triumph and relief of achieving articulate speech. As I yelled I pointed. And as I pointed I sprang. For there had come to me – with utter inevitability, you will admit – the one unquestionably correct course of action at such a juncture. Attendants were already closing on the red-bearded man. But I got there first, grabbed that beard with both hands, and pulled. The next instant I became aware that he was yelling too. He was yelling with pain. There were tears in his eyes. A single tuft of hair did actually come away. But his beard was as genuine as the childish down on my own lip. And the folio that ought to have been no more than a box concealing that little show-case lay open on the floor – a perfectly ordinary and authentic book.”

“But this is terrible!” The Vicar was dismayed. “It was a shocking situation for any sensitive boy. Whatever happened next?”

Appleby smiled. “I certainly experienced all the standard things – like wishing that the floor would open and swallow me up. The establishment, clearly, would have liked to wring my little neck. Only for the first few moments they were too much occupied with apologising to my outraged victim, asking him if he wanted a doctor, offering to call him a taxi, begging to be allowed to rebind the folio, and a great deal more besides. That allowed me to get a second wind.”