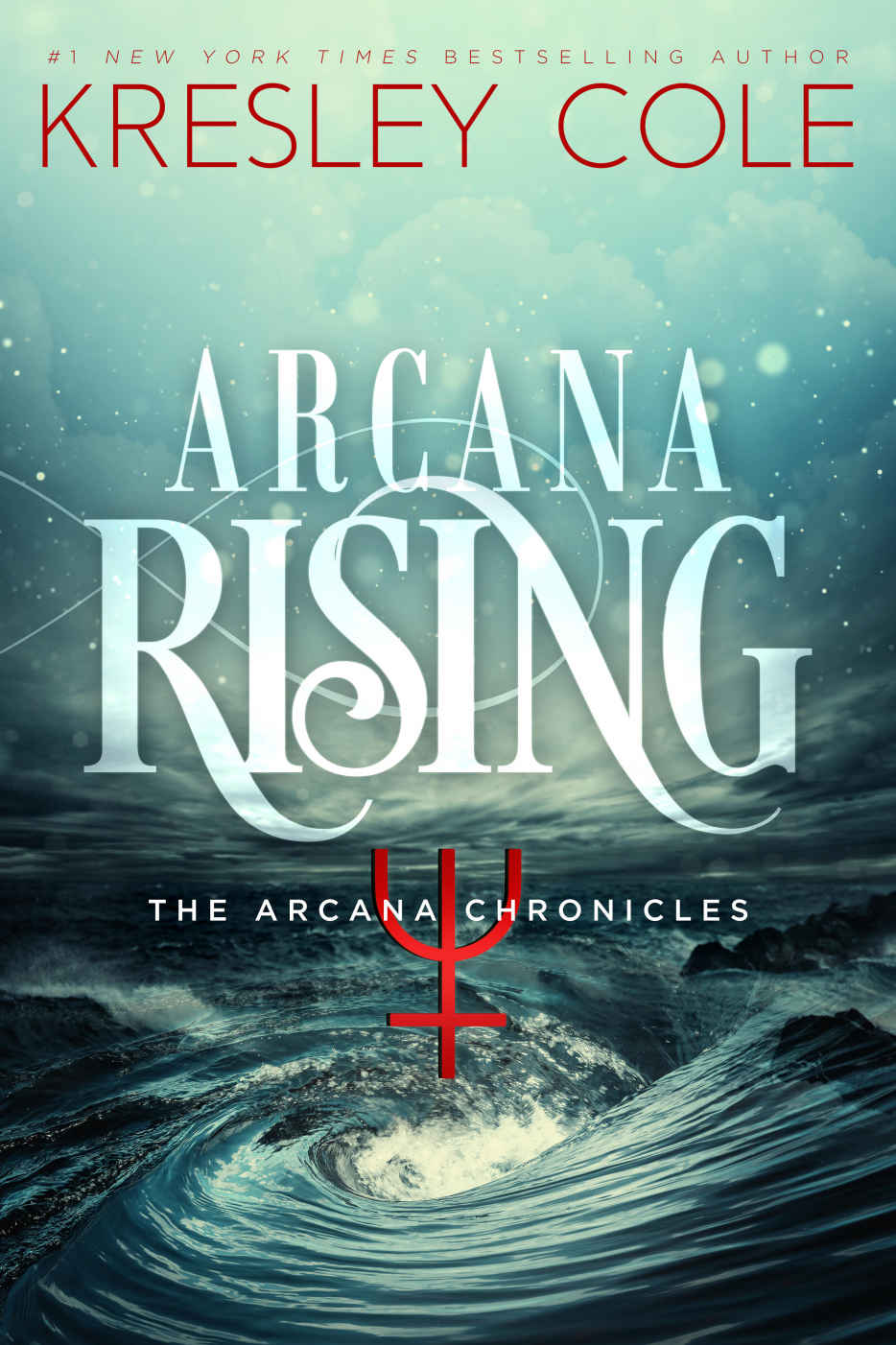 This book is a work of fiction. Any references to historical events, real people, or real places are used fictitiously. Other names, characters, places, and events are products of the author’s imagination, and any resemblance to actual events or places or persons, living or dead, is entirely coincidental.

I couldn’t have published ARCANA RISING without a team of dedicated professionals. Thank you so much to everyone who gave their invaluable assistance!

All things medical: Dr. Bridget, who’s been medically fact-checking me for more than fifteen books.

Helicopter research: Nicola Schenker with Reykjavík Helicopters. Nicola, that trip was spectacular (next time I’ll try the shark). And many thanks for letting me record what an alarm sounds like!

Story editing: Joal Hetherington, Kristi Yanta, Charlotte Herscher, and Barbara Ankrum, all of whom delivered keen insight and essential feedback. My next manuscript in on its way. . . .

The Field of Battle

Next in the Arcana Chronicles

THE FIELD OF BATTLE

During the Flash, a cataclysmic flare, the surface of the earth was scorched to ash, and bodies of water evaporated. Virtually all plant life was killed, most animals as well. The majority of humans perished, with women hardest hit. After months of total drought, rain began at last—then fell constantly, until the first flurries of snow. The sun has ceased to rise, leaving the world in endless night. Plague spreads.

Militias unify, consolidating power. Slavers and cannibals hunt for new victims. All are bent on capturing females. The Bagmen (Baggers)—contagious zombies created by the Flash—roam the Ash (the wastelands), wailing for blood.

The Arcana. In every dark age, twenty-two kids with supernatural powers are destined to fight in a life-or-death game. The winner will live as an immortal until the next game, the fallen reincarnating. Our stories are depicted on the Major Arcana cards of a Tarot deck. I’m the Empress; we play again now. In my sights: Richter, the Emperor Card, who massacred an army, possibly murdering my ally Selena and Jack, my first love.

Knowledge of the game will help me survive it. My grandmother is a Tarasova, a wisewoman of the Tarot, who can help me develop my Empress powers: regenerative healing, the ability to control anything that roots or blooms, thorn tornadoes, and poison.

I’ll need all of these abilities to challenge the Emperor. But to defeat him, I’ll call on an alliance of killers—rogues, witches, knights, and warriors—with nothing left to lose. . . .

Death kept taking me farther from Jack. I stretched my arms out, fingers splayed toward the heat of that seething pool of lava. “He can’t be dead,” I sobbed. “Can’t.
NO, NO, NOOOO!
”

“You want to follow the mortal?” Aric demanded. “Get your revenge first. The Emperor mocks your pain.”

I could hear that fiend in my head—laughing.

The red witch exploded inside me, a force that could
never
be contained. I shrieked, “You will
PAY
!”

As the Emperor laughed, Death murmured in my ear, “I have your grandmother,
sievā
. That was the gift I spoke of. We’ll teach you how to kill the Emperor. You’ll avenge Deveaux.”

“Don’t you understand? Jack’s not
DEAD
!” I screamed that over and over. “He’s alive!”

With my mind teetering on the brink, I spied something in the skies above us. I gaped, disbelieving.

Real?
Un
real? Just before oblivion took me down, a mountain of water curled over our heads, racing toward that hell of flames.

Circe’s towering wave. Taller than a skyscraper.
—Terror from the abyss!—

Circe’s and Richter’s calls boomed in my mind, jolting me back from the blackness.

“Come!” Aric snatched me into his arms and sprinted from the clash. “When they meet, the blast and then the flood . . .”

I stopped fighting him; the need to turn Richter’s laughter into screams clawed at me, which meant I had to survive.

Aric gave a sharp whistle; a horse’s nickering answered. Thanatos. With me secure in his arms, Aric leapt into the saddle, and spurred the warhorse into a frenzied gallop.

We all but dove down a slope—passing the mangled body of my own dying mount—then charged up the next rise.

I gazed over Aric’s shoulder as that tidal wave crested above Richter’s lake of lava.

Heaving breaths, Aric kept Thanatos at a breakneck pace. Up another mountain. Down another slope—

A hiss like a giant beast’s. A detonation like a nuclear bomb. The shock wave was so loud my ears bled. As loud as the roar preceding the Flash.

The air grew hotter and hotter. The world rocked as a blast of scalding steam chased us.

BOOM!
The force sheared off the top of a mountain behind us. Boulders crashed all around as we careened into yet another valley. Still we rode.

The ground quaked from the weight of an ocean of water. I could hear the flood roaring toward us.
“Aric!”

He got as far as he dared, as high as he could. “Hold on.” Clutching me tight, he dropped from Thanatos, who kept galloping away. Behind the cap of the tallest mountain around, Aric braced for impact. He wedged his metal gauntlet between boulders, wrapping his other arm around me.

Gaze locked on mine, he yelled,
“I’ll never let you go!”
We each sucked in a breath.

The searing water hit. The explosive impact ripped me from his chest, but he caught my arm, clenching his fingers above my elbow.

Death’s grip. The ungodly force of that flood. My watery scream . . .

Aric never did let me go—

How long had I been carried in this furious current?

Days and nights. Nights and days. With no regeneration. One of my shoulders ended in a ragged stump, skin fluttering like fringe. My collarbone was broken, my cheek, my nose. Ribs cracked. Skin scalded.

Rain pounded, the snow a memory. Blinking against the downpour, I zoomed past mountain peaks . . . the hulks of old high-rises. . . . Barely keeping my head above the surface.

Aric, where are you?
Had he lived? Or was he dead like Jack?

No, I refused to believe Aric was gone too. He was the Endless Knight. He was invincible.

Would he believe
I
had died? Probably about to. He would make sure to win this game, enduring endless nights to reunite with me again.

Dizziness. Spinning . . . in a whirlpool? A vortex had caught me!
Circe, why are you playing with me?

Maybe because I’d betrayed and murdered her in past games?

Spinning, spinning . . . like the ball in a roulette wheel. The whirlpool was too strong! “J-just f-finish me, Circe!” My stomach lurched. When I heaved, water flooded my mouth, nearly choking me.

My lungs screamed for air. My deadened legs kicked. I sucked in a gasping breath at the surface.

Wails.
I squinted. The whirlpool had trapped Bagmen! On the opposite side of the vortex, four of the zombielike creatures spun with me. Their wasted skin glistened, chunks of flesh missing. Their eyes were pale as chalk—and filled with hunger.

The circle tightened. I screamed when their grasping hands missed my face by inches. They snapped their teeth at me, desperate to bite.

To drink my blood.