Read Archangel Rafe (A Novel of The Seven Book 1) Online

Archangel Rafe (A Novel of The Seven Book 1) 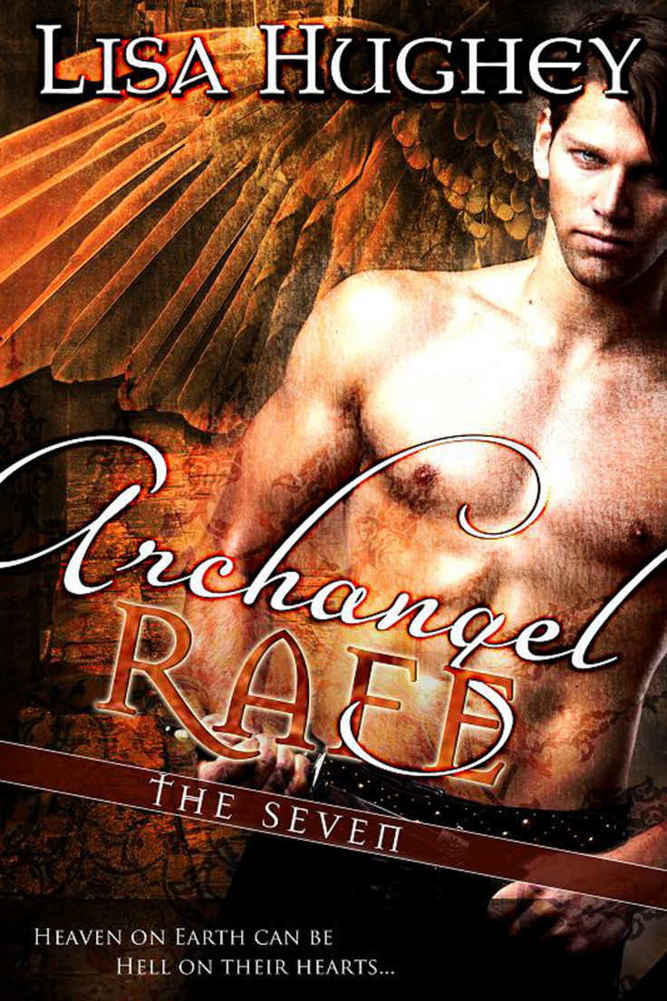 A Novel of The Seven

ALL RIGHTS RESERVED. This book contains material protected under International and Federal Copyright Laws and Treaties. Any unauthorized reprint or use of this material is prohibited. No part of this book may be reproduced or transmitted in any form or by any means, electronic or mechanical, including photocopying, recording or by any information storage and retrieval system without express written consent from the author/publisher.

This book is a work of fiction and any resemblance to persons living or dead, or places, events, or locales is purely coincidental. The characters are products of the author’s imagination and used fictitiously.

To all parents everywhere.

While Angelina’s troubles with her children are not autobiographical, the emotions behind her frustration and her feeling of being overwhelmed are definitely taken from my own experiences as a parent. I think the willingness to sacrifice everything for your children
is universal. It’s so easy to get lost in just taking care of everyone else and to suppress your own desires that you forget that you are deserving of the same things you want for them. The true triumph is in finding your path to happiness and fulfillment in addition to caring for your family. I am lucky enough to have that in my writing. I hope if you haven’t found your passion that you keep looking. It is out there.

Thanks to Kim Killion at Hot Damn Designs (
www.hotdamndesigns.com
) for a fantastic cover.

Writers sometimes feel like we exist in a vacuum with lots of noise and chaos created inside our own mind. But the truth is most writers have a community of friends who they lean on for support, plot direction, character development, and general career guidance. I am really lucky to be surrounded by a fantastic group of women who help get me through the day.

First off, to my editor Theresa Stevens who has taken my writing to a whole new level, I am so thankful you are my friend as well as my mentor.

A huge thanks to LGC Smith and Adrienne Miller for pep talks, goal setting, last minute reads, and general cheering up. I am lost without our weekly meetings.

A big squeeze for Martha Flynn who kept me writing even on those days when it was tempting to hide under the covers and read. I miss our daily phone calls!

A shout out to the Pens Fatales ‘Adrienne Miller, Gigi Pandian, Juliet Blackwell, LGC Smith, Martha Flynn, Nicole Peeler, Rachael Herron, & Sophie Littlefield) for being super writers who inspire me to keep me putting words on the page. I am blessed to call you my friends.

Raphael, the Archangel of Healing, returned to the Third Sphere of the Angelic Realm with only one goal--to cleanse himself of the stink of human violence. But Victor, head of the Virtues, waited in his chamber to greet him.

“Can it wait?” Rafe snarled. He tossed his medic tunic, stained with blood, onto the floor at his feet. He toed off his boots, brown with the dust of the Afghani dessert, and discarded them next to the clothes. Feet and chest bare, he couldn’t wait to get out of his worn blue jeans.

Frustrated. Sweaty. Exhausted. Perspiration slicked Rafe’s hair. The stench of death slimed his skin and permeated everything. With every breath, cordite and dust clogged his throat. He was so tired of humans. They brought destruction upon themselves.

“Fine.” Rafe dropped his filthy jeans and was now completely naked. “Then follow me.”

Rafe stepped into the steam room and grabbed a pristine white towel from the bench. He wrapped the soft cotton around his neck and held onto the ends with bunched fists. Hot dry heat seared the back of his thighs and closed in on his lungs. Each inhalation burned down his throat and cleansed away the events of the past day.

Victor sighed heavily and poured aromatic water over the heated stones. The sage-infused liquid sizzled and evaporated into mist.

Chin on his fist, knuckles bloodied, elbow on his knee, skinned from an encounter with the hard-packed dirt, Rafe sat in a classic thinking pose. Steam swirled around him as he waited for the head of the Virtues and the Second Sphere to begin.

Victor paced back and forth, his steps jerky and his gait uneven. Although he looked like a pro-wrestler pumped up on steroids, he acted like a prissy old man. “You are not connected with the humans.”

Rafe didn’t want to be connected. He wanted to ascend to the Second Sphere and extend the distance between his existence and that of the humans. They were a pain in the ass. Never satisfied, always grasping and reaching for the next thing.

“Do you know where I’ve been for the last twenty-four hours?”

But Rafe ignored Victor. “I was in Afghanistan, helping my Angel healers try to save police recruits blown up by their own people.”

Rafe interrupted. “The improvised explosive device detonated beneath a bus.” The rickety ancient transport had spewed flames and bodies onto the barren Afghan desert. Metal from the smoking hull had peeled back from the frame like the skin of a banana. Black lines from simple dynamite scorched the sand and marred the landscape.

“One hundred police recruits who only wanted to make a better world for their families, for their children. That explosion destroyed the hopes of many villages.”

But Victor really couldn’t comprehend. Charred remnants of the dead, a boot, an arm, a torso with no head, scattered across the earth like rose petals. The screams of the living echoed in the air. A woman with her eye ripped from her face. Another recruit stood helpless, his hands painted red with his own blood as he frantically attempted to staunch the flow. The driver’s breath wheezed as he gasped for life. The stark images, sounds, smells haunted him.

His stomach churned. “You have no idea.”

If he’d had second thoughts about his ascension, the damage from yesterday’s roadside bomb convinced him he needed to leave this job and this sphere. The plague had been a piece of cake compared to the modern world. Humans had no respect for the sanctity of life. Being in charge of the healer Angels was a weighty responsibility especially when
he
didn’t care if they lived or died.

Victor intruded on his somber reflection. “You need to have compassion for the human race if you want to ascend to the next level in the Angelic Realm.”

His compassion had been erased, scrubbed out by years of senseless destruction. But Rafe kept his mouth shut.

“It’s the duty of the Virtues to make sure the Cosmos are in balance and to correct things if they get out of alignment,” Victor intoned. “But you won’t be an effective Virtue if you do not understand what makes the humans act and react the way they do.”

Don’t argue. Don’t push. Just state your position. Quietly and with dignity
. “I am ready to make the ascension to the Second Sphere.” He couldn’t wait to spend all his time in the lab, working on antidotes to the biological and chemical weapons that humans created.

No? Rafe straightened and pulled his shoulders back. His body was stiff with denial. “Why not?”

Another presence shimmered into the steam room. Nora, Madame Throne, head of justice in the Angelic Realm, the highest authority over the Third Sphere.

“Raphael, you’re exhibiting the quality you despise in humans.” Her voice held a melodic almost hypnotic quality and drifted to him through a fog of annoyance. “You are too focused on your own wants, on the next level, on the next challenge.”

Bullshit. He did not like the comparison. At all. And if she was here as his friend, Nora, he would tell her. But clearly, she was Madame Throne.

“You need to come to terms with exactly where you are now.”

Victor finished for her. “Then you will be ready to ascend.”

Steam lay heavily in his lungs. The hot wet air stifled him as much as his current position. He knew arguing was futile, and yet he couldn’t help it. “But--”

“Raphael, this is our judgment.” Nora disappeared as quietly as she appeared. The bitch was succinct.

And if the Thrones made a decree, the decision was resolute.

Victor held up his hand and then leaned closer. “We’re friends, yes?”

“I sense unease in you that wasn’t there before. A malaise.” Victor rested his hand on Rafe’s bare shoulder, his beefy fingers held Rafe down, held him back. “For an Archangel who is supposed to be a healer, this is not a good trait.”

Victor was right. But Rafe was not about to admit it. These days he tried to spend most of his time in the lab, looking for cures to illness and searching for antidotes to disease. He needed to be as far away from the human condition as possible. For reasons just like today. The senseless devastation was preventable. Avoidable. Completely unnecessary. And he felt unable to defend against it all.

He’d been restless and increasingly discontent. He needed this promotion. Needed to get away from humans.

“What do I need to do?” And how fast could he get it done?

“The committee has a solution.” Victor paused.

Rafe’s blood drilled an urgent rat-a-tat through his right eyeball, as if his scalp were too tight for his skull.

“We want you to reconnect with humans by working a transition.”

He’d had such dreams, such fire for the job when he’d first taken over as the Archangel of Healing. But the human race had worn him down with centuries of their self-destructive behavior. They hadn’t needed the Nephilim to destroy them. They were going to succeed all on their own.

And he wanted no part of their downfall. His responsibility. His curse. To heal people bent on destroying themselves. Lately, disdain and disgust for the entire human race overrode every other emotion.

But he could work a transition. Long ago he’d done many of them. Maybe this wouldn’t be as bad as he’d thought. He would pretend to reconnect with humans and the Virtues and Thrones would never know. He would make sure that they had no reason to deny him the promotion and keep him in the Third Sphere.

He loosened his jaw and concentrated fiercely on not cracking his teeth. “Okay.”

“Right now you’re too far removed from the very people you are tasked with protecting and healing. We believe if you work a transition you will remember what it was like to be fully human with its inherent fragility and their innate enthusiasm.”

Yeah. Screw that. But an Archangel did not piss off a Virtue. Not if he wanted to ascend.

“Fine.” Rafe thought quickly still trying to work an angle for this requirement. If Victor had his way, they’d give him a tough case. Rafe needed someone who would be right on board and raring to go. “Let me pick the human to transition.”

Victor thought for a moment. “I can grant that request.”

“How long will the test last?”

“Until they are completely ready to heal on their own.”

“Done.” He mentally skimmed over the list of humans on the verge of their transition. He had the perfect choice.

The elder Angelina Guerisse was on the edge of passing. He’d miss the old woman. It seemed like just yesterday that she’d been a new initiate so ready to heal the world, so full of enthusiasm and hope. Her transition had been smooth and easy.