Archie and the North Wind 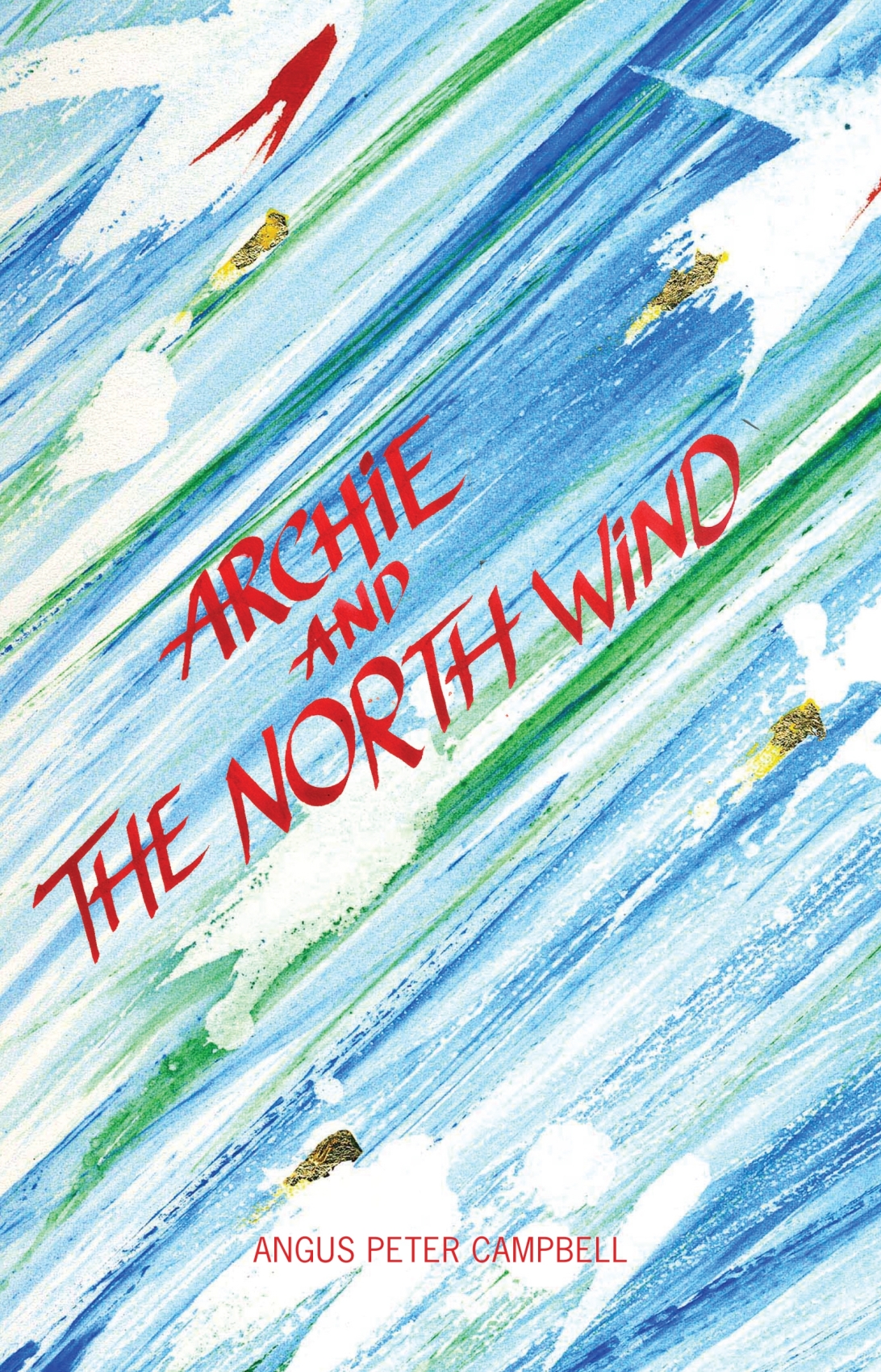 ANGUS PETER CAMPBELL has been described as the Mark Twain of modern Gaelic literature. He has won many awards for his writing, including the Bardic Crown  and a Creative Scotland Award, and starred in the acclaimed Gaelic film
Seachd: The Inaccessible Pinnacle
. He now lives at Reul-na-Maidne with his wife and children.
Archie and the North Wind
is his first novel in English.

The author’s right to be identified as author of this book under the Copyright, Designs and Patents Act
1988
has been asserted.

The publisher acknowledges the support of Creative Scotland towards the publication of this volume.

Remembering R. and the workers in the wind

‘The Wee White Bull’, as told by Betsy Whyte, Montrose, to Barbara McDermitt, transcribed in
Tocher
54 and 55; I translated the original Scots story into Gaelic and then ‘re-translated’ these into Gobhlachan’s English. Thanks for permission to reproduce these stories to Dr Cathlin Macaulay, Archivist, and Dr Margaret MacKay, Director, School of Scottish Studies.

‘Hector and the Balloon’, as recorded from Angus MacLennan, Frobost, South Uist, on 30 April 1958, by John Lorne Campbell. This extract from
Stories from South Uist
by Angus MacLellan, translated by John Lorne Campbell, is reproduced by permission of Birlinn Ltd, www.birlinn.co.uk. Thanks also to Magda Sagarsuza at the Canna Archive, and the National Trust for Scotland.

‘The Red Book’, ‘Connal’s Tale’, ‘Hurrah for Kintail’ and ‘The King of Lochlann’s Three Daughters’ can all be found in J.F. Campbell’s great nineteenth century collection,
Popular Tales of the West Highlands
, gathered from carters, servant-girls, fishermen, nursemaids, drovers, tinkers, shoemakers, blind fiddlers and others.

The little story about the snowball and the rabbits (in a different form) from Eòghainn MacKinnon, Elgol, Isle of Skye.

Thanks to my wife, Liondsaidh Chaimbeul, for the cover drawing and for the picture of Gobhlachan, to Pàdraig Tarscabhaig for technical help, to Jennie Renton for her sensitive editing, and to the excellent team at Luath Press for all their support and encouragement – Gavin MacDougall, Leila Cruickshank, Tom Bee, Christine Wilson and Nina Haese.

THE OLD STORY
has it that Archie, tired of the north wind, sought to extinguish it.

He built a house, then a wall, then a doubling-wall, and fences and hedge-barriers, but the whining whistle of the winter wind still filtered through. The more he refused to listen, the louder it roared.

So he planted a forest to the north side, then dug deep to establish a lake to absorb some of the wind’s force, then another thick forest on the far side, but as he lay in bed on those long January nights he could hear the whole world move.

‘Was that a sparrow, somewhere to the north?’

‘Impossible, in the depth of winter.’

‘Maybe it was to the south, with the swirling gale carrying it through the barriers? To sound as if it was coming from the north?’

He looked out the attic window where the universe was quiet and white in the snow.

Lying back in bed he listened again. The sound of breathing downstairs, where his wife rested. The distant throb of a television in his son’s bedroom. How loudly the snowflakes fell onto his window. He was a thin man. Like a wisp of grass really, all short and stubbly in the winter, lush and long in the summer. Where sheep grazed, and cows munched and the
speal
– the scythe – mowed. How precious grass is in this bare, rocky place.

Years ago, in a Geography book in school, he was told that the snow came from the east. Born in Siberia, it travelled across Russia like an army, recruiting flakes to fall gently on these western shores as a soft blanket on a bed, pure and pristine and white. Virginal they called it then, which now seemed such an archaic word in a world where everyone was born knowing.

And then the thaw would come and the white world grew ugly, messing up the streets and muddying the socks inside the shoes until all the snowmen had gone, leaving only a fractured stick here, a disused scarf there.

When he was born, Archie knew nothing. Slowly he realised that the sweet thing in his mouth was his mother, and that the dark thing that hid the world from him was the inside of a drawer in which he slept, and that the stranger who came home from sea every year-and-a-half was called his father.

When he was five he was sent to school and was told that other worlds existed beyond the fank and the hill and the shoreline. They had different colours from the one he inhabited. An elongated green one was called Canada, while the Union of Soviet Socialist Republics was red and the United States of America light blue, just like the sky on a bright summer’s day.

His republic was divided into quarterly segments, called
earrach
and
samhradh
and
foghar
and
geamhradh –
spring and summer and autumn and winter, though the old people never tired of telling him that these were modern divisions which made no sense to them, who calculated by the old dispensations beyond the Gregorian calendar.

‘In our days,’ they would say, ‘we measured differently. By the moon and stars and the sun and tide.’ And they would chant out old names to him, which made as much sense as saying Pluto or Mars or Saturn – names which he had once detected on an atlas hidden in the teacher’s room, tucked behind the blueish globe.

And they would patiently explain to him how February really began in what was now January and never finished until what he called March was almost done, and how April used to be in two parts, pre-sowing and post-sowing, and how August was the month of both the harvest and the badger moon, and how
Samhain
marked the beginning of winter, which would always be long and wet if it happened to fall on a Wednesday. Most of his life these remained glorious truths as well as mysteries, like the name Tanganyika which he recalled from the story of David Livingstone, and the name Aix-la-Chapelle which he remembered from the war stories of his uncle, his father’s brother, who returned with one leg and one shiny medal from a muddy place called France.

Archie himself was no hero. He had never done much, neither college nor university. Leaving school at fourteen he had been apprenticed to the local smithy, a wizened old man reduced to the nickname ‘Gobhlachan’ – literally, ‘Crotch-ridden’. Some said this was merely because he always sat astride his anvil like a horseman, others alluded to withered balls; some argued through age, others through natural disposition, some seeming to recall an accident of long ago when his testicles were crushed by the back-kick of a Clydesdale horse he was shoeing out in the open yard.

Whichever it was, Gobhlachan’s trade was a dying art. In the twinkling of an eye, all the horses were gone and the little work he procured was a mixture of welding for the emerging cars and the re-moulding of iron railings for garden furniture.

Archie was taken on as an apprentice in a golden moment, when a woman from Poland arrived in the area with a string of horses, intending to open a beach riding school down by the shoreline. The woman – Olga Swirszczynska – had once been a ballet teacher and musician, but a back injury – caused in an air accident, she claimed – had finished her career and forced her to try all kinds of exercises, from yoga to gentle horse-riding, in an effort at regaining fluidity.

Instead, she fell in love with horses: their smell and physical presence, their power and beauty, their raggedness and temper, their sheer hard-earned intimacy. Sure, there were some who nuzzled up and cooried near like well-behaved children, but these were never the best: when put to the test out in the dawn air, they were too soft and lazy.

It was always those other ones – the awkward bastards whose trust had to be earned – who proved best when the rain hammered down at
5
Am and you led them leaping over the down hedges.

That was in England, of course, before the stable failed and went bankrupt and before she moved north, picking up horses here, there and everywhere on the way, from dealers and circuses, from farmyards and the
RSPCA
, finally arriving in this godforsaken, windy spot on a cold April morning when the Atlantic was brewing like a kettle, preparing for the storm that went down in history as
An Siabadh Mòr
,
The Great Shaking.

Those who lived through it described it as you would describe the moon: as a marvel placed above your garden. ‘It came,’ they said, ‘unexpectedly, from the north, though the sea had been thrashing in from the west all night. By that time, everything was tilting eastwards – the haystacks and the peatstacks and the carts and byres – but just when we thought it was all over, it suddenly moved northwards and the icy wind blew as if you could see God’s cheeks bellowing in and out, and it left nothing standing. We survived because we hid, in the hollows burrowed out in the machairs where the little-people once lived, though the bones we shared the hollows with are now all gone, taken by the later storms and the erosion.’

Naturally, of course, some folk blamed the strange Polish woman, who had arrived that very day with her string of horses. ‘How did she survive anyway?’ they muttered, not really believing that the horses had corralled themselves into a magic circle round the woman, nose to tail, their shiny flanks offering her all the world’s protection from the hurricane.