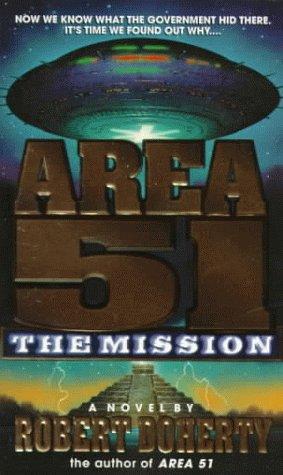 SUMMARY:
Now we know what the government hid there. It's time we found out why....Hidden deep in the Amazon rain forest is a place shrouded in mystery. It is called The Mission. And in nearby villages people are screaming in pain as they die from a virus more deadly than Ebola. They can't escape it. They can't cure it. They can't stop it from exploding into a worldwide epidemic poised to kill us all....Scientist Lisa Duncan and Special Forces officer Mike Turcotte suspect this new "Black Death" is actually a biological weapon in an escalating war between us...and "them." Them? The aliens who are part of a chilling conspiracy connected to ancient riddles, a government agency...and Area 51. Now from the Great Wall of China to a top secret facility beneath Antarctica's ice cap, an eclectic group of soldiers and scholars are working with Duncan and Turcotte to give humankind one last shimmering hope to survive. To stop the aliens--at least until the Pandora's box of Area 51 opens up again.... 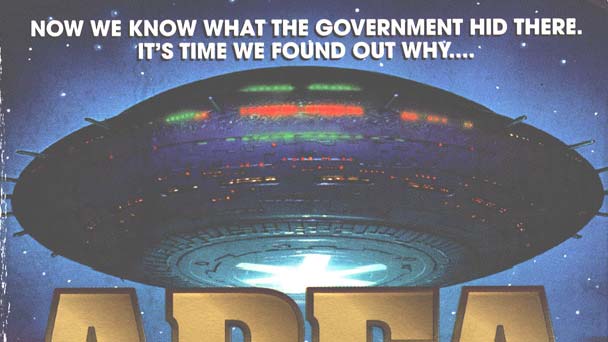 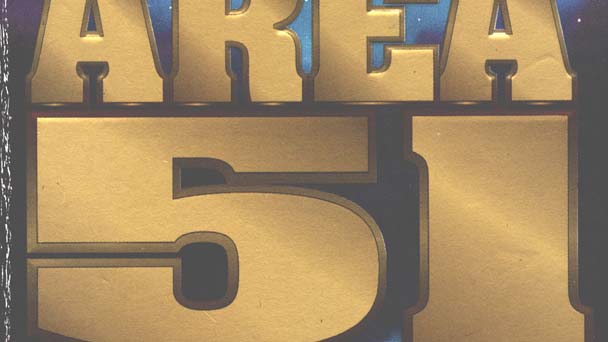 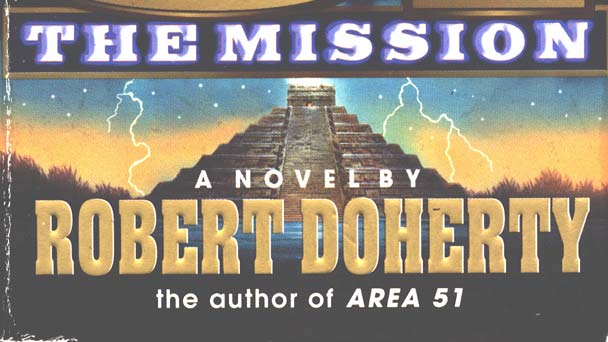 A new image appeared on the computer screen. Two areas were circled in yellow. One was full of tiny blue spots. The other red ones.

"My God," Lisa Duncan exclaimed, "there must be a hundred of them."

"I don't get it," Turcotte said. "Are they connected to the rocket that went down there?"

"I don't know," Kincaid admitted. "It just seems like too much of a coincidence. And what's even more bizarre is the other village, where all the people show up dark red. The shade indicates the average body temperature is over one hundred one degrees Fahrenheit."

"Everyone in the village is hot?" Turcotte asked.

"What are we looking at?" Duncan asked.

"The end of the world. To be more specific, the death of every human being on the face of the planet who is not a puppet of the aliens. . . ."

To my father, George Mayer, for helping make a dream come true

A golden tendril was stretched out from the guardian computer under the surface of Mars and wrapped around the head of the Airlia who had awakened the first echelon and sent them off in their talon ships toward Earth.

The guardian informed her of the destruction of the fleet and the death of her comrades. The pupils in her red eyes narrowed as she processed this information.

She twitched as the guardian picked up a small anomaly near Mars. She had the surface sensors focus on it. Something was coming toward her location, less than thirty seconds out. There was no electromagnetic reading and she almost ignored it, but she paused. She was the only one left awake. She could afford to take no chances. She mentally gave the commands.

In the center of the solar field array a bolt of pure energy shot upward. It hit the incoming Surveyor probe dead-on.

The Airlia saw the nuclear explosion take place three miles above her location. It had been close but not close enough.

The Airlia began giving commands. She would wake the others. Then there was much to do.

The first battle had been lost, but the war was far from over.

Lisa Duncan adjusted the focus on the telescope. "There's the mothership. You can see it against the moon as it goes by."

Duncan was short, barely over five feet, and slender. Her dark hair was cut short, framing a thin face, etched with worry lines and stress. She had a glass of white wine in her hand, and gestured toward the scope, inviting the other person on the deck to take a look.

She wore khaki pants and shirt under a brown leather flight jacket that was worn and faded. The jacket was necessary, as a cool breeze was blowing down from the Rocky Mountains and the telescope was on a deck that wrapped around her house, precariously perched on the side of a steep mountain. The faint strains of jazz floated out of the open door onto the deck. A fire blazed in the large stone fireplace inside, the smoke curling out of the chimney above their heads.

The house, 7,000 feet up, overlooked the Great Plains to the east. The lights of the city of Boulder twinkled 2,000 feet below. The glow from Denver was farther away and to the right. The nearest neighbor was over two miles away up the packed dirt road that was the only way to get to the house.

The Rockies stretched north and south, the continental divide to the west. It had taken them over two hours

to drive the rental car from Denver International to here, the last forty minutes from Boulder on a precarious narrow road that had degraded from paved to gravel to dirt the closer they got to the house.

Mike Turcotte put his chilled mug full of beer on the railing and took Duncan's place at the scope. He bent over, placing his eye on the rubber eyepiece. He was a solidly built man, of average height, about five-ten, with broad shoulders. His skin was dark, a legacy of his half-Canuck, half-Indian background. His black hair was peppered with gray and cut tight against his skull. He wore jeans and a black T-shirt with a gold Special Forces crest emblazoned on the left chest. He didn't seem to notice the cool breeze.

"That thing survived a nuclear blast," he marveled, seeing the mile-long alien ship through the scope as a sliver of black against the bright full moon.

"It was designed to cross interstellar distances using a drive system we don't have a clue about," Duncan said. "Remember, Majestic-12 couldn't cut through that skin for over fifty years when they had it at Area 51."

Turcotte straightened. "Is it in a stable orbit?"

"It won't be coming down anytime soon. Larry Kincaid from the Jet Propulsion Lab says it's in a high orbit that doesn't seem to be decaying. The ship is tumbling very slowly. There is the gash the explosion put in the side, but considering the power that was expended, it's not much damage. Close-ups reveal the ship's skin is torn, but the framework seems intact. One of the talons is nearby, also tumbling."

He remembered that sixth alien spaceship chasing him, firing, just before the nukes went off. It had sur-

vived the blast intact, but the ship had gone dead—just in time before it blew his bouncer out of the sky.

"What about the other five talons?" Turcotte asked.

"No sign. Kincaid says they were probably caught inside the cargo hold in the explosion." Duncan leaned against the railing. "UNAOC wants to check it all out."

"Check it all out?" Turcotte repeated.

"Send astronauts up on shuttles and rendezvous with both the mothership and talon."

"Take Area 51 into space, in other words," Turcotte said.

Duncan frowned. "That's an odd way of putting it. This is the United Nations Alien Oversight Committee we're talking about, not Majestic-12."

Turcotte considered her in the dark. "Do you trust UNAOC?"

For a while the only sound was the wind through the pine trees on the hillside. Finally Duncan answered. "No, I don't. There's another problem."

"With UNAOC," Duncan said. "The dig into the wreckage of Majestic's biolab at Dulce, New Mexico— to find what was on the lowest level and to try to find the guardian computer that was there—has been stopped."

Turcotte wasn't overly surprised at that piece of information. "Why?"

"I didn't get a reason, because I wasn't officially notified. I only found out through a source of mine in Washington. I would assume that the U.S. is pressuring UNAOC to stop. The disclosures at Area 51 were bad enough. I think whatever was going on in Dulce would be worse."

"From what I saw when I broke in there," Turcotte said, "they were doing illegal biological testing." "They

took the Nazi scientists who worked the death camps and put them in Dulce and gave them the green light to continue their work. I'm not sure / want to know exactly what they were doing there." He shrugged. "Let's hope U.S. pressure is the reason."

Duncan pulled up the collar on her leather jacket. "What do you mean?"

"Dulce—and Area 51—were under the control of Majestic-12. Majestic—at the end—was under the control of the guardian computer from Temiltepec that was working for the Airlia group under Aspasia's control. If you follow the trail, maybe there's still that same faction that doesn't want what was being done in Dulce to be discovered."

"Majestic was broken up and the Temiltepec guardian buried when Dulce was destroyed," Duncan said. "Aspasia was destroyed by you."

"Majestic was only the American group that was under control of the guardian," Turcotte said. "I'll bet you my next paycheck there are other groups in other countries under the mind control of a guardian. Temiltepec wasn't the only guardian left behind by the aliens. We did find one in China, don't forget."

"Long buried," Duncan said. "And that one was Artad's guardian, not Aspasia's."

"True. But it would also be naive to assume there aren't more guardians out there we don't know about. Don't forget, the Easter Island one is still active.

It would also be foolish to think that by stopping Aspasia's fleet we totally defeated the Airlia.

"And remember, it was a foo fighter that took out Dulce, which makes me think someone was trying to cover something up. And maybe whatever was supposed to be covered up is still going on somewhere else."

"You think the biotesting at Dulce was moved?"

"Either moved or being done elsewhere. It would make sense to have redundant facilities. The same is true with the guardians under Aspasia's control."

Tideline by Penny Hancock
The Last White Rose by Desmond Seward
The Prophet Murders by Mehmet Murat Somer
Shooting Stars by Stefan Zweig
Nikki by Friedman, Stuart
Bared to You: A Crossfire Novel by Day, Sylvia
The Dragon Engine by Andy Remic
Night of Wolves by David Dalglish
Dying to Know by Keith McCarthy
Scavengers: July by K.A. Merikan