Read Army of You & Me Online 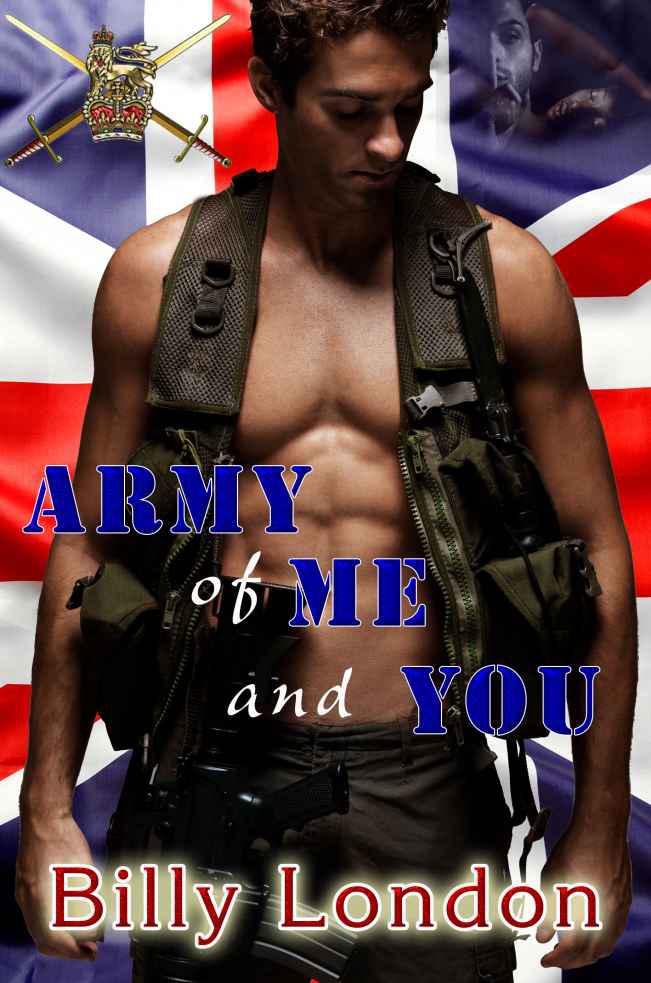 Army of Me & You
By
Billy London

All rights reserved. No part of this book may be used or reproduced electronically or in print without written permission, except in the case of brief quotations embodied in reviews. This is a work of fiction. All references to real places, people, or events are coincidental, and if not coincidental, are used fictitiously. All trademarks, service marks, registered trademarks, and registered service marks are the property of their respective owners and are used herein for identification purposes only. eBooks are NOT transferable. Re-selling, sharing or giving eBooks is a copyright infringement.

The irony of Madeline Mpoyi's choice in a career was never lost on her. Being that her days as a girl in a war torn village, suffering the horrors of an innocent Rwandan child started off as anything
but
sweet most would find it incredibly funny that as a woman she'd be manufacturing treats to send to the soldier that saved her life. Or at least she
thought
it was the soldier that saved her life. Errr...technically it is...being that he has the same name and comes from the same bloodline. Although Major Nathaniel Goldsmith Sr. has long retired, his son is carrying on the family tradition as a Captain in the army. A Captain that has come to depend on both Madeline's sweet letters and even sweeter care packages. And it would seem that said Captain has Madeline in his sights...eager to sample whatever else she's willing to offer...

This book is written by a genuine Brit, the spelling the slang, the vernacular are all honest to goodness Queen’s English. Therefore, rest assured there are no spelling errors, grammatical errors (other than the ones we all make when speaking in everyday life), it was written as it was supposed to be. Thank you for your purchase!

“My pleasure.” Madeline smiled at the last customers of the day as she closed the door behind them. She turned the
Closed
sign to the front and slid the bolts into place.

Not a bad day, even though she’d been interrupted in her time with the
Standard
newspaper. She couldn’t really turn customers away, not in the current economy, even for a few minutes of much-needed peace. Wednesdays were always busy in the shop. Mainly with school kids, some of whom had very sticky fingers, and she didn’t hesitate in slapping hands or catching them by the scruff of the neck and turfing them out. Madeline had a sharp memory for faces
—
even sharper for little thieves. The ones who came back usually came back with money and a careless apologies. That was when she hooked them with sherbet and Space Invaders and chunks of buttery fudge. Speaking of which, she needed to make some for the Saturday stall in the local market.

Returning to the counter, she went back to the newspaper. Rather than looking at adverts, she read the news. It was a ritual she’d never grown out of, but she always scanned for his name. It wasn’t there, thank God. She closed the paper and thought about cashing up. The money in the till would need to go into the safe, for banking tomorrow. With a sigh, she glanced up and yelped in shock.

A man had his face pressed to the glass, trying to see inside the shop. He saw her and knocked on the glass. Approaching the door, she folded her arms across her belly and said loudly, “I’m sorry, we’re closed!”

“Captain Goldsmith.” He dug into a bag and pulled out a crumpled paper. “You were sending care packages to my platoon.” He held up the paper against the glass and she recognised her own handwriting. What on earth was going on?

Cautiously, she opened the door, not taking her eyes from him. She realised he was in full dress uniform. Even so, she let him inside and kept the door within reach. British soldier or no, she would never be alone in a room with a man without an escape route.

“Hello there!” Captain Goldsmith grinned at her, holding out a hand. “Nice to finally meet you.”

Captain Goldsmith’s hand still hovered in front of her, and she slowly took it. She suspected the Afghan sun had baked his skin that glorious golden biscuit colour and bleached his hair a sandy blond. His eyebrows were nearly white at the edges, and freckles scattered over his nose. A lush-lipped smile was surrounded by a strawberry-tinted beard. He almost crushed her fingers in his grip before releasing her hand.

“This shop is brilliant. I just wanted to come and say hello and thank you in person.” He took in the shop, turning his huge body in a half circle. “Before you sent photographs, I used to imagine this was Willy Wonka’s Chocolate Factory.”

“Cain,” he replied then sent her another smile in apology. “I’m still used to formalities. Sorry, I didn’t mean to interrupt you or shock you into speechlessness.”

No, this couldn’t at all be right. “I’m confused. I thought Captain Nathaniel Goldsmith was serving with that platoon.”

“Would it help things if I explained that Nathaniel is my first name, but people kept getting me and my dad confused, so I go by Cain?”

She lifted her shoulders helplessly. “No, it would’t.”

He nodded. “Right. Do you have any tea?”

Cain dwarfed the small room at the back of the glorious sweet shop that had made him, his platoon, and some fast-fingered children in Afghanistan pretty happy. Madeline had her back to him as she bustled with milk and the kettle.

“Do you want Earl Grey or Breakfast Tea or Yorkshire Tea or Darjeeling...?”

He blinked slowly. “That’s a lot of tea.”

She bit her bottom lip. “What takes your fancy?”

You do?
“Breakfast Tea. Thank you.”

She nodded and turned back to the kettle. Dressed in a full-skirted dress in a green and white print, she looked like a 1950s housewife. He supposed it went with the vintage sweet shop. The only thing that was out of place was the bullet wound on her bare arm. Didn’t fit the mould of squeaky clean shop owner. But then, what did he really know about her?

The first time he’d even heard of
Tutti Fruitti
, it had been raining solidly for a week in Helmand. Everyone was depressed.

“It’s like fucking England here now, boss,” one private had complained. The mail couldn’t have turned up at a better time. As Cain was handing out boxes of letters and gifts for the platoon, he caught sight of the large, hefty package with his name on it. The writing was unmistakably feminine, and he wandered off to open it, ignoring whistles and catcalls from everyone else. “Boss has a bird? Thought he was a sausage smuggler.”

Inside the box were packets upon packets of sweets. Not ones that any newsagent carried, but sweets from his childhood. Cola cubes. Rhubarb and custard. Chocolate mice. Those spaceships with the sherbet inside. Drumstick lollypops. Strawberry laces. Bon bons. There were also boxes of truffles.
Marc de champagne. Marc de
freaking
champagne!
He scrambled for a letter, something to explain what and why but mainly what the hell. He found it right at the bottom of the cardboard box. Again in the same feminine handwriting.