Read As I Rode by Granard Moat Online

As I Rode by Granard Moat 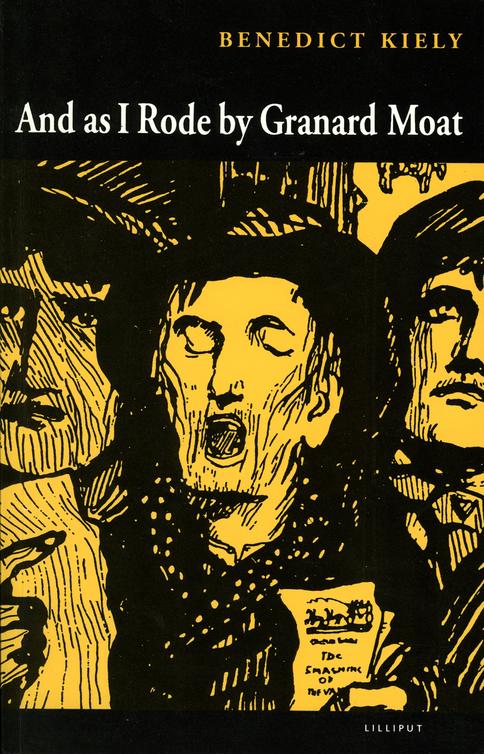 For Ciarán MacMathúna
who owns the world that I wandered through

And as I Rode by Granard Moat

‘When I Was a Little Girl’ [Alice Milligan]

‘The Hills above Drumquin’ [Felix Kearney]

‘The Man from God Knows Where’ [Florence Wilson]

‘Like Dolmens Round My Childhood, the Old People’ [John Montague]

‘The Lions of the Hill Are Gone’ [Samuel Ferguson]

‘I Am the Mountainy Singer’ [Joseph Campbell]

‘The Boys of Mullaghbawn’ [Anon.]

II From Ulster to Leinster

‘The Humours of Donnybrook Fair’ [Anon.]

‘Dublin Made Me’ [Donagh MacDonagh]

‘Down by the Liffey Side’ [Donagh MacDonagh]

‘The Hill of Killenarden’ [Charles Halpine]

‘A Racehorse at the Curragh’ [Francis Stuart]

‘The Night before Larry was Stretched’ [attd to Rev. Robt Burrowes]

‘An Elegy on the Death of a Mad Dog’ [Oliver Goldsmith]

‘The Time of the Barmecides’ [James Clarence Mangan]

‘Lines Written on a Seat on the Grand Canal’ [Patrick Kavanagh]

‘The Blackbird of Derrycairn’ [Austin Clarke]

‘The Lost Ones’ [Francis Ledwidge]

III From Leinster to Connacht

‘A Vision of Connacht in the Thirteenth Century’ [James Clarence Mangan]

‘In a Foreign Land’ [Douglas Hyde]

‘The Isle of the Blest’ [Gerald Griffin]

‘I Think if I Lay Dying’ [Winifred Letts]

‘Ascent of the Reek’ [Francis MacManus]

‘The Oak of Kildare’ [Francis MacManus]

IV From Connacht to Munster

‘The Night We Rode with Sarsfield’ [Denis A. McCarthy]

‘The Lambs on the Green Hills’

‘For a Bride You have Come!’ [Padraic Colum]

V And Back to Tyrrellspass

‘The Deck beside the Road’ [Anon.]

‘The Circus Is Coming to Town’ [Denis A. McCarthy]

‘An Ode in Praise of the City of Mullingar’ [Anon.] 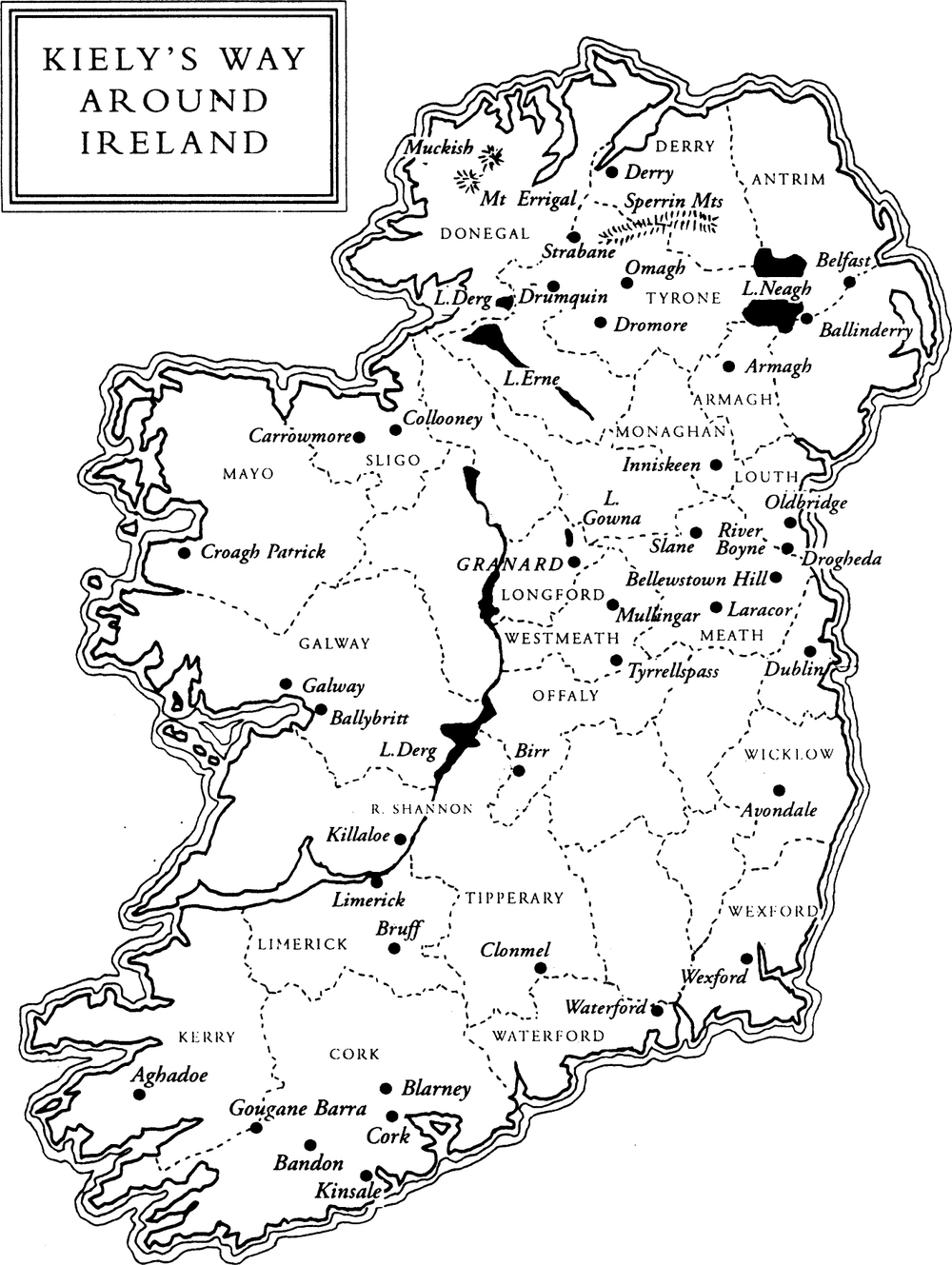 Sometime towards the end of the 1920s, when I was eight or nine, my elder brother, who was a great man for hoarding books, considered that I was mature and literate enough to be allowed access to his collection of
Our Boys:
back numbers of that famed periodical that had been printed and published even before my time. My recollection is that it was indeed a very superior effort, and the feature that most attracted me was a serial called ‘Tyrrell of Tyrrellspass’. Perhaps it was simply the fine sound of the names that first got to me, the repetition, the sibilants, which evoked the slapping of scabbards and the creaking of saddle-leather. But I read and reread that blessed serial until I practically knew it by heart and thus became, at an early age, an undoubted authority on the history of the wars of Elizabeth and Hugh O’Neill.

My learning I carried with me – with, I hope, modesty and dignity – to the farmhouse of my Aunt Kate Gormley at Claramore, near Drumquin, a great house for local people coming and going. And, at the age of ten or thereabouts, I most generously decided to give those uninstructed rural people an insight into the history of their country. But one neighbouring farmer, a man called Paddy McCillion (he had a drooping moustache and a dozen or so lovely sons and daughters), elected to play the cynic and pretend that Richard Tyrrell of Tyrrellspass, Hugh O’Neill’s famed guerrilla captain, had never existed.

What followed was my first major controversy, and I can still clearly recall the length and intensity of the argument, as I brought up all my learned references from the
Our Boys
to flatten that imperturbable unbeliever. And I can recall, too, the frustration with which I would withdraw from the warm farm-kitchen to the cool privacy of the orchard and there stamp my feet in frenzy. But in the end, generous Paddy confessed to the hoax; we became firm friends and I admitted that he was, after all, a proper Irishman.

So the name of Tyrrellspass has a Proustian effect on me, and when I hear it I see first of all not that handsome little town on the road from Dublin to Galway, but the farmhouse at Claramore and the steep hill called Con’s Brae, from the top of which you could see, very far away, Mounts Errigal and Muckish. And I see the two deep lakes of Claramore like the eyes of a giant buried in the bogland. And I see Drumard Hill, which had the most fruitful hazelwoods, and out on the heather the bilberries or blayberries or fraughans or what-you-will. And I see the byres and barns and stables, and the two cart-horses, Jumbo and Tom, and the multitude of collie-dogs, and the hearthfire, and the wide flagged floor of the kitchen. And Paddy McCillion’s moustache. And I hear the chirping of the crickets.

And, now that I think of it, some time ago I heard a man on the radio say that the cricket, like the corncrake, is now about extinct in Ireland – two of the species disposed of by modern methods and modern living.

Because of that
Our Boys
serial, Richard Tyrrell, captain of cavalry, rides on in my imagination as he once rode in reality for Hugh O’Neill, and with Domhnall Cam O’Sullivan Beare on that final, marathon march from the far end of the Eyeries peninsula to O’Rourke’s Leitrim: all to
fade away in the end, like so many more out of that time, and die in distant Spain, unchronicled, unchaunted.

But not quite. For always to reawaken my memory there was Geoghegan’s 108-line ballad of ‘The Battle of Tyrrellspass’, in which Tyrrell and O’Connor Offaly, with four hundred men, defeated, it was said, one thousand of the English and their Irish supporters. Here’s a bit of the old ballad:

The baron bold of Trimbleston hath gone, in proud array,

To drive afar from fair Westmeath the Irish kerns away.

And there is mounting brisk of steeds and donning shirts of mail,

And spurring hard to Mullingar ‘mong riders of the Pale. […]

For trooping in rode Nettervilles and Daltons not a few,

And thick as reeds pranced Nugent’s spears, a fierce and godless crew;

And Nagle’s pennon flutters fair, and, pricking o’er the plain,

Dashed Tuite of Sonna’s mailclad men, and Dillon’s from Glenshane. […]

MacGeoghegan’s flag is on the hills! O’Reilly’s up at Fore!

And all the chiefs have flown to arms from Allen to Donore,

O’Ferall’s clans were sweeping down from distant Annalee.

Now there by the Lord were rolling, resounding lines and a fine iron clangour of Norman names. If you know anything about the ballad history of Ireland you will know that those two verses come from a ballad by Arthur Gerald Geoghegan, whom in old books you will find described simply as the author of The Monks of Kilcrea’, a book-length series of stories in verse with songs and interludes.

Tyrrell of Tyrrellspass defied Elizabeth’s captain, the great Mountjoy, who proclaimed the Norman-Irishman’s head for two thousand crowns. But in his midland stronghold, ‘seated in a plain, on an island, encompassed with bogs and deep ditches, running in line with the River Brosna, and with thick woods surrounding’, Tyrrell laughed at armies and broke them as they came, and when he had to retreat did so
successfully, leaving behind him only some wine, corn, cows and garron, and beasts of burden.

He was true to his country, faithful to his friends and a holy terror to the Elizabethan foe – in a skirmish in the O’Moore country he had almost taken the life of Lord Deputy Mountjoy. With his assistance, O’Donnell had evaded Mountjoy’s blockade and crossed the Slieve Phelim mountains into Munster. Tyrrell controlled the vanguard after the disaster of Kinsale, he helped MacGeoghegan to defend Dunboy and, in the end of all, fell back to Cavan, his head still on his shoulders. And from Cavan to Spain …

I first encountered this ballad in the two volumes of Edward Hayes’s splendid anthology
The Ballads of Ireland
(A. Fullarton & Co., London 1855), loaned to me when I was here at school in Omagh, by that great teacher, M.J. Curry, who also once suggested to me that you could make a book about Ireland by just wandering around, and here, there and everywhere reciting a poem or singing a ballad. I would begin here in the Strule Valley and go here and there until in the end I came to Granard Moat and the countryside that had inspired Geoghegan’s resounding ballad. It would be a long and intricate journey and I would meet many songs, poems and ballads on the way.

Then I had the pleasure and privilege of encountering a young Dublin publisher, Antony Farrell of The Lilliput Press, who also thought it was a good idea. For one thing he is an O’Farrell, even if he went to school as far away as Harrow. And he came from the land around Granard Moat, and is very proud of that. So we set together to make a book. And here is how I begin the journey.

Earth Star by Edwards, Janet
A Masterpiece Unraveled (The Masterpiece Trilogy Book 2) by Nikki Lynn Barrett
Deceive Her With Desire by Nina Pierce
Immortal Healer by Elizabeth Finn
The Viking's Pursuit by Winter, Nikki
Faking It by Diane Albert
Too Hot to Hold by Stephanie Tyler
A Guide Book to the Great Tree by Kathryn Huang
Shadowed by Connie Suttle
Awakening on Orbis by P. J. Haarsma