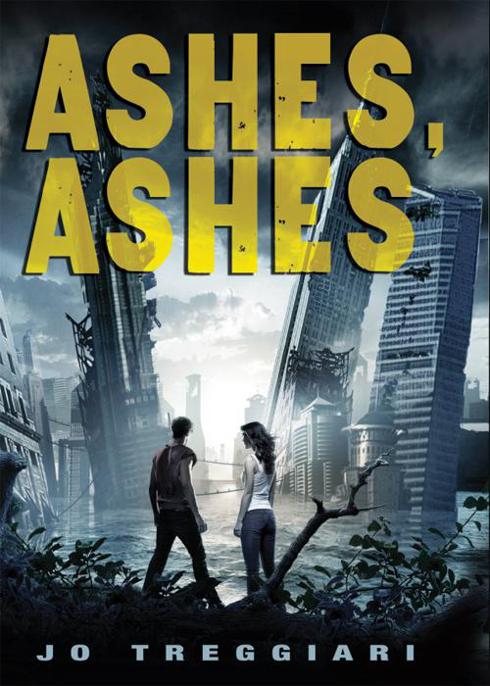 CHAPTER THREE: THE TIME BEFORE

CHAPTER EIGHTEEN: IN THE BOX

EPILOGUE: ABOVE THE WORLD 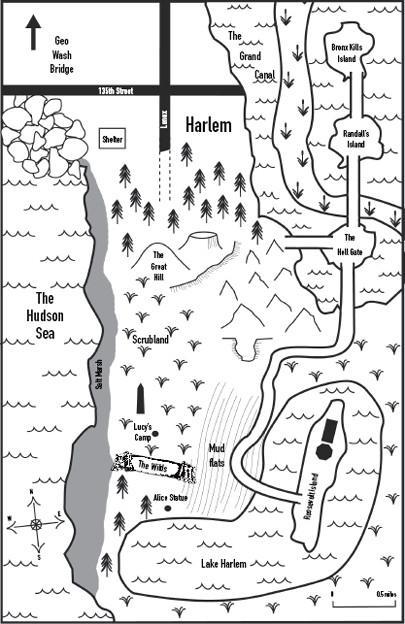 Ring around the roses
A pocketful of posies
Ashes, ashes
We all fall down
.

L
ucy hunched over the corpse and felt a tiny bubble of hysterical laughter gurgle up. But as she stared at the lifeless turtle stretched out on the rough plank, the laughter died abruptly. The tang of fresh blood was unpleasant. She should have butchered it outside, by the shore, but the hour was getting late and she’d felt exposed on the sand. Besides, she had never actually done a turtle before, never noticed how the wizened face and papery eyelids made it look like a very old person.

She positioned the knife edge along the thinnest section of gray, wrinkled neck and pushed down, fixing her gaze steadily in front of her. The knife stuck. She tried to stop her brain from screaming thoughts of sinew and bone, and leaned her weight on her hand. The flesh resisted, then suddenly gave way. The knife slammed into the hard wood underneath, and the head rolled off onto the ground with an audible
thump
.

Her stomach heaved. Fortunately, it was empty. Lucy put her knife down and dragged the woven screen away from the entry hole to her shelter, letting a breeze sweep in and clear the stench from her nose.

She closed her eyes and breathed in deeply, sinking to her knees. She could smell the scent of impending rain. She wondered whether she could survive it for another year. Two days of steady rain had already turned the ground outside her camp into a series of muddy pools threaded by soggy grassland, and since her shelter lay in a hollow, there was now what amounted to a narrow moat right outside the front entrance.

The floods had first come about five years ago, when she was eleven years old. Melting polar caps; rising sea levels; increased rainfall; a steady battering of hurricanes, tornadoes, and earthquakes weakening the land: everything the scientists had warned them about. And the world mapped in her geography books had changed with a frightening rapidity; continents shifting shape, coastlines altered. San Francisco, Los Angeles, Venice, Thailand, Spain, her beloved Coney Island, Japan, had all but vanished beneath the waves. Australia was half the size it had been, shrinking like an ice cube in a warm drink, and New York City had become a clump of six or seven scattered islands connected to the mainland by a few big bridges—the Geo Wash, the RFK, the Will Burg. Some were only accessible during the Long Dry.

Small but fast-moving canals flowed over the same routes as the old roads. Lexington Avenue, Fifth Avenue, 42nd Street, were all underwater now. But people had rallied and rebuilt. They’d stretched suspension bridges strong enough to hold a dozen people and a few bicycles at a time across the swollen canals that now ran in a crisscrossing grid over what had been Manhattan. Thousands of sandbags shored up the dikes along the smaller waterways, and a massive wall of masonry and detonated high-rises had been built in an attempt to keep the inland sea back from the edges of Harlem and Washington Heights. Cheap plywood houses sprang up on stilts, altering the cityscape. Deep, wide gutters were cut into the ground, and cars were banned from the city, except on the outskirts and the few roads that had survived the earthquakes.

They’d called it “New Venice” jokingly, and it had seemed okay then. Lucy, living in the solidity of northern New Jersey, miles away from the shores of the sea, had felt safe, and she’d kept on taking the train into the city or hitching, kept on cruising the vintage stores for cool clothes. It rained frequently, making whole neighborhoods inaccessible for months out of the year, and the summers were more sweltering than ever, but the streets were still packed with people buying and selling or just hanging out. And then, as if all that had been just a dress rehearsal for some disaster movie, four years later the plague had arrived.

She could almost hear the newspeople again, like something out of one of those cheesy old sci-fi television shows: the warnings to stay inside; the rising panic; the video of gaunt, red-eyed survivors, their skin seemingly charred; the doomsayers with their sandwich boards, black robes, and crazy talk about disease-carrying birds and God’s wrath. Seeing anchor-women, who normally looked like airbrushed mannequins, seriously freaking out was scary. Lucy still had nightmares. She still woke up certain that her skin was covered in scabs and she was bleeding to death from the inside out.

Instead of globe-eyed aliens or a gigantic meteorite headed straight for Earth, it was the resurgence of a killer disease that had reduced the global population to less than 1 percent of what it had been within three short months. Eating healthy, exercising, living in a big house, driving a fancy car—none of that mattered at all. The pox took almost everybody, and it seemed that people between the ages of thirty and sixty died faster and harder than anyone.

And who would have guessed that Lucy would have turned out to be luckier than her entire family?

Lucy “Lucky” Holloway. She used to hate her nickname, but now—now it was different.

It was weird to think that her younger brother, Rob, had started calling her that as a joke. He’d also nicknamed the dog, Rex, “Tex Mex” after it had been discovered that the golden retriever could scarf down a dozen frozen burritos without vomiting, and he’d renamed their older sister, Susan, “Maggie” (short for “Maggot”) because she liked to eat rice pudding while bundled up on the couch in an old blanket.

Maybe Lucy had gotten off easy.
Lucky
instead of
Lucy
wasn’t too bad, and most people didn’t realize it was meant sarcastically because of her ability to trip over her own two feet, break dishes, and knock books off of shelves merely by walking past them. As a preteen, she’d managed to run through the glass French doors that led into the kitchen from the pool, not once, but twice, necessitating visits to the emergency room and eleven stitches in her calf the first time and then, six under her chin.

She knew her clumsiness annoyed her parents. She’d always felt as if she were a changeling dumped into their magazine-perfect midst. She didn’t even look like them, having inherited some recessive gene from an ancient Welsh ancestor. She was slim and gray-eyed, with wildly curly black hair—shocking compared to their pink and blond athletic good looks. She was awkward and she was ugly. And worse than that, she wasn’t a superjock like her brother or a brainiac like her sister. She was something her happy-homemaker mom and her big-lawyer dad just couldn’t understand: good at nothing in particular.

In her journal she’d written long, angry, tearful diatribes about feeling out of step and alone at home and at school, where the cliques were ruled by people just like her brother and sister, until she’d convinced herself she didn’t care, forced herself to tune out when Rob’s latest game score or Maggie’s newest scholarship was being discussed over the dinner table. At least she hadn’t been nicknamed after something that pulsed and wriggled on rotten food.

Poor Maggie. Gone, and her old blanket gone, too, burned in a useless attempt to get rid of the sickness. Together with the quilts Grandma Ferris had painstakingly pieced together and Lucy’s threadbare teddy bear and the embroidered sofa cushions and everything else it seemed had made life soft and comfortable. Great piles of sheets and bedspreads, mattresses and pillows were piled sky-high in every neighborhood, then doused in gasoline and coaxed into infernos that burned for weeks. When the wind was coming from the east, Lucy imagined she could still smell the acrid fumes like burnt hair, could still see the towers of black smoke billowing against the blazing blue sky. It was not until the Long Dry was over and the Long Wet began again that the fires were finally quenched by the pelting rains. The parched dirt liquefied into slow-moving rivers of sludge and covered everything in mud, including the pits—the deep trenches used once the cemeteries were full, where bodies were stacked in rows like cut logs and scattered with quick lime to hurry the decay in an attempt to prevent reinfection. Then the controlled bombings began, turning high-rises into massive concrete cairns over the sites where thousands had died within days of one another. The skeletal bodies, the livid marks on blackened skin, were buried under tons of rock, and all the crushing details of life as it used to be were erased.

The memories she tried to preserve were of her life before the plague descended, and in her mind it was like those times were lit by a gentler sun, all Technicolor blurry and beautiful. She remembered the smallest things: her mother’s buttermilk pancakes and homemade blackberry jam, the smell of fabric softener, the feel of socks without holes. Now, looking at her grimy fingernails and dirt-encrusted skin, she was amazed at how much she had changed. How things like homework, a daily shower, and a hot breakfast on the table seemed so unimaginable to her now.

She was certainly not lucky. She was Lucy, plain and simple.

She leaned back on her heels, staring at the flattened pile of dry grasses where she slept, her sleeping bag with her vintage leather motorcycle jacket scrunched up for a pillow; the crooked shelf she’d hung from a couple of branches holding a dented tin plate and bowl; a camping knife, fork, and spoon strung on a piece of string so she wouldn’t lose them; her backpack with the essentials; a change of clothing. All she had left in the world besides her knife, the survival manual she’d scooped off the floor of a bookshop with all the windows smashed out, and a few other personal items. The book was battered and stained, pages escaping from the cracked binding, but it was precious.

She scraped her hair back off her sweaty forehead. It was too short to stay tucked behind her ears and just long enough to fall into her eyes constantly. She felt an oozing wetness on her cheek and looked at her hands. Mud, blood, and who knew what else. Tears? Lucy didn’t cry too often. She figured she’d used them all up by now. She bit her lip hard between her teeth and stood up clumsily. She’d been crouched over for so long that her right foot had gone to sleep. She dragged the screen back over the doorway, then limped over to the bucket she kept filled with rainwater and rinsed her hands, drying them roughly on the legs of her jeans.

By The Sea, Book One: Tess by Stockenberg, Antoinette
Stars Rain Down by Chris J. Randolph
The Case of the One-Penny Orange: A Masao Masuto Mystery (Book Two) by Howard Fast
On Thin Ice (The Baltimore Banners Book 8) by Lisa B. Kamps
Scars of the Past by Kay Gordon
A Mother's Trust by Dilly Court
Midwife of the Blue Ridge by Christine Blevins
All Clear by Connie Willis
Just Stitches: 54 Knitting Stitch Patterns by Tara Cousins
Blood Kiss by J.R. Ward