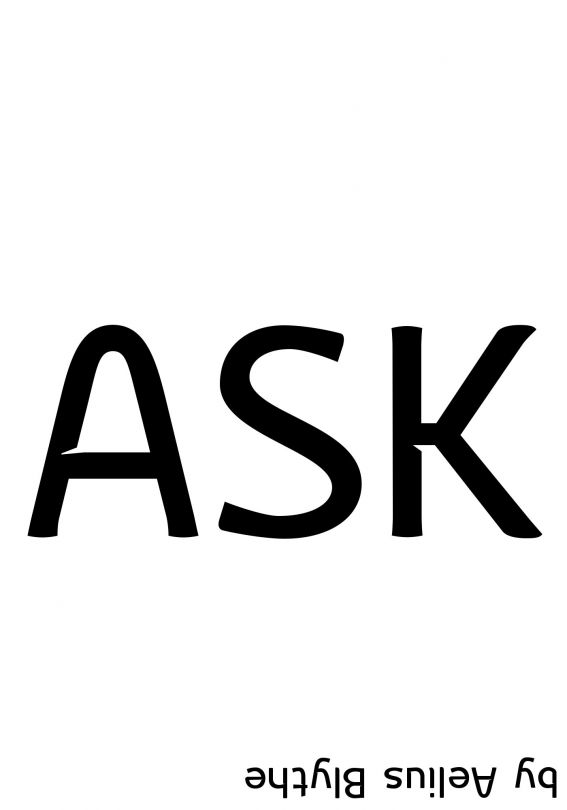 "All individuals shall have the right to an
identity.

Therefore, in defense of this right, every
person shall have the right to safeguard that identity through
positive identification.

And therefore, in further defense of this
right, every person shall have the right to face those who infringe
on the freedom of that identity.

Thereby, no one's right to identity shall be
subject to undue stress or harm."

She grit her teeth and looked down at the
desk. Her eyes followed the swoop in the wood's grain as it made
it's way around a dark knot, the one blemish in the honey-colored
wood. Looked like an eye.

She flicked her gaze away from it, over to
the desk corner by her left elbow.

Her fingers still rested on the keys,
uselessly poised over the letters. She couldn't look up, couldn't
meet his eyes, even though his eyes weren't really there at all.
She knew they were somewhere. Somewhere. That's what mattered. So
she kept her gaze on the corner of the desk, a gaze reflexively
lowered as if the eyes on the other end of the connection were
actually burning into her.

Can't you just ask
already?
she pleaded silently, still not
meeting the eyes that weren't there.

They were somewhere. They were. They had to
be. She knew that much. His eyes were... she had no idea. They
could have been on the other corner of the state. Or they could be
across the street.

This kind of place wasn't so specific.

The stats, the descriptions, the
personalities, the meager amount of information glowing on each
person's profile... it all meant squat if the one writing it had
lied. And there was a high chance they had.

And she knew it.

His eyes could have been in Guam, for all
she knew.

She shook her head and finally snuck a peak
back at the screen in front of her. Her fingers moved, finally
having something to say.

"Have work," her fingers explained. "I'll be
on tomorrow."

But she had already quit.

But her fingers had already slammed the
metaphorical door shut and the epithet did not make it out of her
head. She leaned back and sighed, looking down at the desk again
because there was now nothing more interesting in the room.

How could she trust a guy who didn't have
the balls to ask one simple question?

She would ask him, of course. If she could.
But she couldn't. It wasn't ladylike. It wasn't okay. Even in this
dark corner of the internet she sat at a neat desk with one new,
blood-red suede heel tapping the desk leg, impatient fingers
tapping the keys with glossed nails that glinted in the screen's
glow. She was a lady, even here. And she'd keep it that way, thank
you very much.

So she wouldn't ask.

They'd cross that bridge
when
he
came to
it. Not her. Of course, she could throw caution to the winds and
just do it...

Then she'd be a slut.

"Wait," he wrote. But she was already
gone.

Evade.
The name continued to glow beside its avatar.

But she was gone, and he just stared at the
bland white face in the little box beside the name – a bland white
face under a brown mop of choppy locks pointing like arrows down
towards a bland white chin, resting feathery on either side of a
slender but bland white neck, and under the rough fringe brown eyes
blinked, delicate, careful. Even on the little phone screen he
could see the spidery spokes in the irises.

It was a good picture, a good avatar anyway,
but it still had that plastic doll sheen. Unlike the name, the face
was generic, nondescript.

They were all just masks.

The word glowed in its speech bubble beside
the name beside the nondescript face for another minute before
disappearing as he tapped it off.

With the screen now dark, his hand hurried
to his pocket to put the phone away. He dropped the device into his
pocket and smiled reflexively at the little clink of metal that
broke the quiet. It was a satisfying, reassuring sound. He let his
hands rest in his pockets, it was a cold night and he liked the
feeling of metal under his fingers.

When he said her name to himself, he
pretended it was her real one. It wasn't, of course, but he did
like to pretend. It was a fitting one, after all.

He looked up and realized it was dark – or
at least, the sky was. Some time on the walk home from work, the
sun had gone down.

Not about the dark.

But the emptiness of the streets was
unpleasant now. Where a second before it had been a comfort, a
safety blanket he wrapped around himself, a quiet companion that
didn't look over his shoulder and that he didn't have to look over
his shoulder for, now it was a lonely gaping thing. Night.

Paranoid
fuck
, he berated himself.

Still, shivers wiggled through his gut at
the night's emptiness, more frightening than its dark sky. The
streetlights lit up the night, and he walked under the black dome
of a city-sized light bubble with the dark sky pressing in from the
outside. The white pools of light from the lampposts overlapped so
that there was barely a spot of dark anywhere on the sidewalk, and
blue light rape-phones dotted each corner. Like those were still
necessary. At least the blue cubes added some color to the grey
night.

He was safe and he knew it.

At least, he was safe from the people that
the blue light phones had been set up to protect him from.

The emptiness still bothered him,
though.

It was impossible to blend
into emptiness. No matter how much he tried, he'd always be just
so... extant. Couldn't really do anything about that. Couldn't just
disappear into emptiness. Couldn't quit. Couldn't swipe out of
sight in the blink of an eye. Couldn't delete himself. No, he had
to settle for being...
there
. Nothing to be done about
that.

Well, at least not anything he wanted to
do.

But it didn't matter anyway. It was Friday
and he wouldn't have to be... there – not fully present, anyway –
outside his own front door for a full two days. And his own front
door was close. His conversation with Evade had taken him almost
all the way home.

A minutes later, he was there.

He emptied his pockets. Wallet, keys, ID
plopped onto the bed. The phone clinked onto the metal desk beside
it. The clink of the gun beside the phone was louder.

The .22 gleamed silver in the pool of light
under the desk lamp. The weapon sat on the night stand staring up
at him, mostly useless. Hadn't even been to the firing range in
over a year. He plugged in his phone, then opened a drawer in the
desk and put the gun away inside it, closed the drawer, concealed
the weapon.

Then, without taking off his shoes, he
flopped down on the bed.

The gun wasn't his most valuable possession.
And it was far from his most illegal.

They still had the Second Amendment, after
all.

The blood red suede shoes thunked on to the
closet floor.

They skittered in different directions. One
bounced off the back wall and lay on its side next to a brown
knee-high boot. The other landed next to a pair of fluffy pink
slippers in the shape of bunnies - the type of slippers saved for
emergencies like breakups or PMS or douchy guys on the internet who
were friendly and warm one minute and then–

Fucking pull yourself together!

She stood a moment staring at the shoes, not
wanting – or maybe not able – to gather up the energy to set them
right. She sighed, a frustrated sigh that hissed out through her
teeth.

She bent down, righted the blood red suede
shoes and set them neatly in between the brown boots and a pair of
sneakers. She resisted the urge to pick up the fluffy slippers.

She turned away from the closet and sat down
at the desk again. The chat window had disappeared from her screen
since she quit the conversation – there hadn't been anyone else to
talk to. And other things had taken her attention.

Now, the screen showed a dark site with
white letters and plastic-faced avatars in boxes.

She closed her laptop so the incriminating
site disappeared.

She hadn't really been looking at it. No,
not really. No she wasn't.

Just glancing out of habit.

There had to be some in these dark corners
that weren't liars or commitophobes.

But it was just a habit to look.

She pushed her computer out of the way and
flipped open a little mirror on a stand, turned on a lamp on a long
neck that arced over her head, making her desk into a
halfway-decent vanity table. She looked herself in the eye and saw
the guilt there.

He turned the limp leaves over with his
fork. A piece of garlic rolled onto the bedspread. He speared the
garlic, blew on it once, twice, then ate it. He leaned over, yanked
a tissue out of a box on the desk and scrubbed at the spot of oil
on the quilt for a moment before giving up and tossing the crumpled
tissue on the desk.

One unenthusiastic fork tine picked at
another leaf of the stuff.

He typed awkwardly with one hand – the hand
that wasn't busy with spinach. The keyboard wobbled, balanced on
his knee as he sat legs crossed on the bed. He paused for one
moment and considered his dinner. Then he put his fingers to the
keys again, and typed the new name into the registration form.

He clicked over to a document full of 9
digit numbers. Scrolling through them he picked one, then and
copied and pasted it over to the registration form.

It was some dead guy's. He wouldn't miss
it.

No one would check it unless someone
complained – there were just too many names to check all of them.
It wouldn't matter anyway. By the time anyone complained, he'd be
long gone.

He hit Enter, breezed past the welcome
screen – he really didn't need to see it for the hundredth time –
and two seconds later he was at a new inbox. Stark and empty, it
was just like all the others he'd created. He clicked over to
another window and entered the new address.

And then, over a dinner of cold spinach, he
read the evening news.

Behind that, another screen was open. He
kept his eye intently on the news, trying not to look for the
bubble that he hoped would pop up, as it so often did:

But it didn't come, and the news
continued.

"The threat to individual identity is
unprecedented in this medium. A person's beliefs, opinions,
knowledge, and esteem – the very foundations of our identity – are
subject to assault on a daily basis. The aggressive and persistent
disagreement that we see on almost every page on the internet is a
challenge, a social, intellectual, and emotional challenge that is
immensely hurtful to these pillars of personal identity.

This body has the obligation to uphold those
rights articulated in the 28th Amendment to the United States
Constitution: that everyone has the right to an identity, to safe
guard that identity, and to face any threat to that identity.