Read Asking For It Online 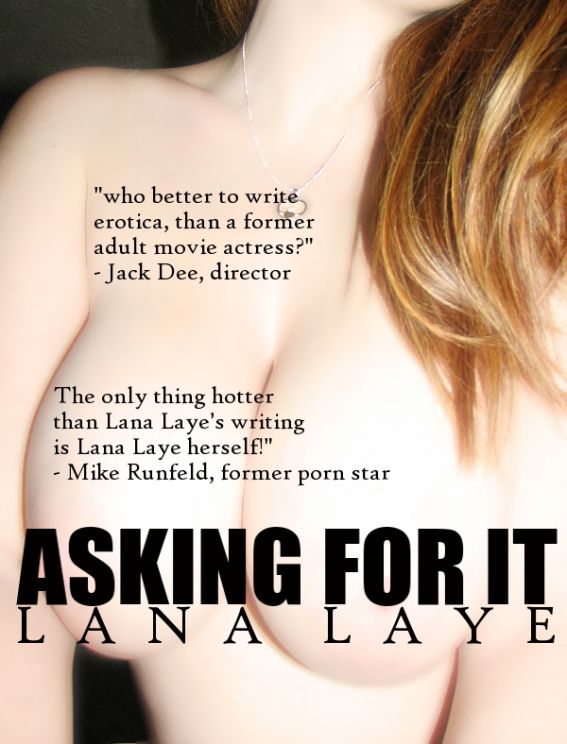 This ebook is licensed for
your personal enjoyment only. This ebook may not be re-sold or
given away to other people. If you would like to share this book
with another person, please purchase an additional copy for each
recipient. If you’re reading this book and did not purchase it, or
it was not purchased for your use only, then please purchase your
own copy. Thank you for respecting the hard work of the
author
. 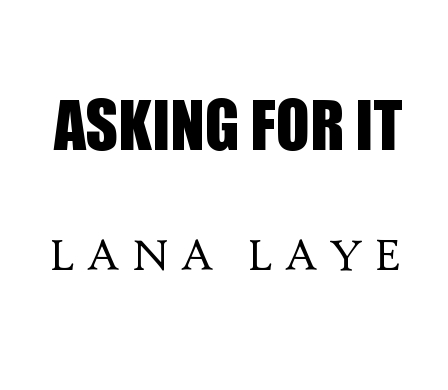 I sighed, couldn't help it. My body
felt as if I'd been dropped from the tenth floor of the Chrysler
Building. I was sticky and every muscle ached. I turned, offered a
smile, because whatever she needed was probably not her fault, and
she didn't look as if it gave her any pleasure to interrupt
me.

"Hi," I said, my voice hoarse. Sucking
three cocks for two hours will do that.

She was clutching a clipboard. The
perfect image of a fish out of water. Why she needed one was beyond
me. Her hair was tied back in a stubby little ponytail, and her
breasts were small flat lumps beneath her pink and white striped
T-shirt. I envied her, though I'd never admit it. As a well-endowed
porn star (36DD, and real), what I have is considered a great
asset, and to moan about that or express envy about the less
well-endowed would be potentially damaging. Only my cat, Kaylie,
hears the truth about what an utter hindrance my tits are, and
listens to me moaning about the strain they put on my
back.

Naomi saw me noticing her and blushed.
I wondered if perhaps she was a little gay, or a lot gay. She was
certainly intimidated by me, but that kind of a reaction always
puzzled me. I fuck for a living, I'm hardly Angelina Jolie or the
Queen of England. Save your idolatry for the royals, folks. We're
just people. And some of us don't even classify as
people.

"Ken wants to see you in his office,"
Naomi told me, clutching the clipboard to her chest now, as if
ashamed to be so poorly endowed in the face of my two sweat and
cum-slicked cannonballs. I resisted the urge to assure her she was
better off, and wished I'd had time to get a robe. I get no thrill
from seeing people feeling bad about what they've got and I hate to
see them embarrassed in front of me. The stories I could tell
them.

She shrugged and made an apologetic
face. "I don't know, but he said it'll only take a
minute."

She nodded, still blushing and moved
away, back into the glaring supernova of lights and the deep
shadows that hunkered around them. I glanced over at the set, to
the rickety piece-of-shit bed they had set up. It was meant to look
Victorian, though I doubted people in that era had gotten their
pillows at Bed, Bath & Beyond, and I'm even more certain that
they hadn't had tags sticking out of them. A few feet from the bed
stood a plywood backdrop, upon which had been painted a stone wall
and a mullioned window, the illustrated storm outside frozen in the
act of raging.

Sitting on the bed was Cal Stone. I
feel describing him isn't really necessary. If you've ever seen a
porn before, then you already know what he looks like. Fake tan,
fake smile, fake everything. Not particularly good looking, but
passable. Cock that he could use for pole-vaulting, and of course,
this last is all anyone really cares about in this business: How
big, and can you use it on camera? Cal uses his like it's a
sledgehammer and girls are the pavement, and any stage whispered
requests for him to ease up a tad go completely ignored. Cal is an
asshole of the highest order, and resisting the urge to chomp down
on his cock when he pinched my nipple so hard I almost screamed,
was not easy.

Next to him was a six-foot three black
guy named R.C. That's it. I guess it's supposed to refer to the
Cola, or maybe those are really his initials. I don't really care
enough to find out, and he doesn't really care enough to tell. But
I like R.C. He's got a wicked sense of humor—the kind that
necessitates multiple takes because he keeps cracking me up, even
while he's carefully guiding his massive member into my ass. But
it's the humor that makes it easier to accommodate his girth, and I
think he knows this. He's disarming, and he jokes a lot. I like
guys who joke a lot. It tells me that the cancer that is this
business hasn't yet eaten the soul out of him. And people like that
are rare.

The other guy is a relative newcomer, a
young Irish guy I don't know much about, and it's him I looked
hoping to see. He's quiet, about as shy as Naomi, and looks just as
out of place as she does on this set. But he met the requirements,
so he's here.

When you do this business long enough,
the faces of the people you work with tend to blur together. Come
see me in my dressing room once the shoot is done and ask me who I
worked with and I'll give you their names. Ask me what they looked
like and I'll have to think about it for a while. Which is why I
found myself surprised to be looking for the Irish guy. His stage
name was Mike Long—a dumb name, but then they're supposed to be,
because people are probably less likely to watch a porn staring
Dennis Higgins Mayhew III, and Victoria Slattersly-Wintergreen. I
know I liked his accent, though typically the only lines spoken
during a low-rent shoot like this one are nuggets like: "Yeah,
swallow that cock, you fucking bitch," "Spread that tight cunt,
baby" or "You like that big cock, don't you?" And Mike had said his
share of those lines, and they'd only stood out from the usual
white static such lines tend to become because of his
accent.

His accent and something he'd done, and
then whispered after we did our first blow job scene
together.

We were fifteen minutes into the shoot.
I was playing a princess and these three were my
knights/bodyguards, ordered to protect me from the imminent threat
of some evil knight from an opposing kingdom or some such nonsense.
Naturally, being the oversexed princess that I am, my character
apparently decides that the best way to ensure my safety is to have
a foursome, and so off we go. I was already out of costume and on
all fours on the narrow bed, with Cal beneath me in a 69 position.
His heavily tattooed arms were wrapped around my back, squeezing me
tighter than necessary. He was attending to my saturated pussy
(courtesy of lube, I might add, and not his greatness) like a dog
with a chew toy, alternating between driving his long tongue inside
me and masticating on my swollen clit while kneading my heavy
breasts as if he hoped to eventually make a cake out of them. As a
means of revenge, I jerked his dick hard enough that he must have
thought I was trying to detach it. It would look good and rough for
the camera, but I doubted Cal would appreciate it much.
Periodically, I tongued his asshole, because I'd read in a magazine
interview with him that it was his least favorite thing to have
done.

R.C. was huffing and puffing behind me,
his sweat plinking onto my back, as he slid himself in and out of
my ass with long, smooth, even strokes. I could feel every ridge,
every vein, every contour of him inside me, and I liked it. I'm not
an anal freak by any means, and when I do engage in it, I prefer
smaller cocks, but like I said, R.C. wasn't rough, and his humor
had relaxed me to more than the usual degree. He was big, but the
discomfort was minimal. I would feel it later though, because no
matter how much preparation there is, and no matter the size of the
dick, my asshole is tight and stays that way, which, while it looks
great on camera and feels great for the guy, means a lot of wincing
for me later on.

We were filming on a digital handheld,
and the camera guy—Josh Rhodes, who looked like he wasn't long out
of film school—hovered around us, trying to get the best possible
angles of everything that was going on. Occasionally he'd mutter a
direction or two ("move your leg, Cal," or "look at the camera for
a sec, Lana", but more often he just floated quietly around the
action like a man with a big glass eye.

The director, a man I've worked with
many times, but have never quite managed to warm to, is an
egotistical and grossly overweight guy who goes by the name Ken X.
I've done eight films for him and have never once felt as if he
thought of me as anything other than a necessary evil. I'd
understand this attitude more if I were an ego too, or a cast-iron
bitch on the set, but I'm not, and don't understand people who are.
I've heard similar stories from other actresses too, some of whom
have had worse experiences than mine, so maybe he just hates women.
I guess it's fair, because I happen to think that if not for the
fact that he's won an AVN Award, he'd probably be working as a
grocery bagger by now.

"For fuck sake, Cal, I'm getting tired
of looking at your asshole!" was about the sum of his contribution
to the scene. "Close your fucking legs before I ram a boom mike
into it."

Against my cunt, Cal sniggered. I
wished for a moment I had teeth down there.

As Cal closed his legs, denying me
further asshole-terrorism in both senses of the word, Ken shouted,
"Mike, you're up!"

Mike stepped into frame, his long—but
not ridiculously long—cock primed and ready thanks to Mandy, the
fluffer, who was sitting on a chair just beyond the harsh studio
lights and watching with interest as she guzzled water from a
plastic bottle.

He brought himself close to my face and
angled his cock downward so that I could take it into my mouth. I
gave him the expected sultry look for the camera's benefit, because
by now Josh had dropped to his haunches, the camera trained on my
face and Mike's throbbing prick.

I smiled back at him, and found I meant
it too. And suddenly, I felt compelled by reasons purely my own, by
commands that came, not from the director or another actor, but
from a need inside myself, to pleasure him. And so I held his eyes
as I first ran my tongue from the seam of his balls, all the way up
his shaft, and then took him deep inside my mouth, the head of his
cock probing the back of my throat.