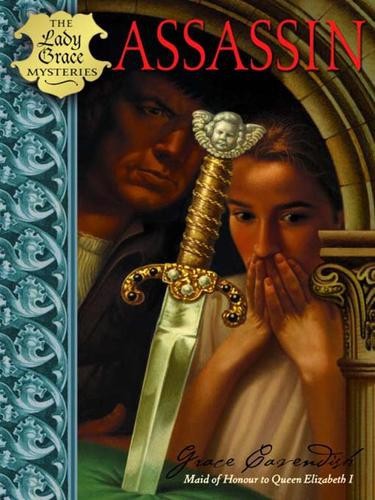 To Meg, with many thanks

THE DAYBOOKE OF MY LADY GRACE CAVENDISH,

LYING AT THE EASTERN CORNER,

THE MAIDS OF HONOUR, THEIR CHAMBER,

GOD’S OWN CHOSEN KINGDOM OF ENGLAND

to write all my prayers and meditations in. That’s what Mrs. Champernowne said when she gave it to me for my New Year’s Gift—and that I could make one of my beautiful embroideries for its cover, which I shall do, because I like making pictures with stitches. But why should I drone on like Lady Hoby about Improving Passages and Sorrowful Meditations on my sins? How boring!

Anyway, I don’t commit any very terrible sins, apart from once ruining my gown when I jumped off a log. And losing things. That’s why I haven’t written anything in this before—I lost it under my bed for a while. But now I’ve found it I’m going to write everything in it. It can be a book about me, Lady Grace Cavendish, Maid of Honour. And all my favourite things. Why not?

My favourite person (apart from my mother, who is dead, God rest her soul) is Her Majesty the Queen. She’s a bit old, which you’re never supposed to say or she might throw a shoe at you. She is thirty-six! Even for a great lady, that is almost too old to get married and have children—as Mrs. Champernowne complains when she thinks nobody is listening. I think Mrs. Champernowne’s pate is addled: why would a queen want to marry and gain a king she’d have to obey? In fact, why would anyone want to get married if they didn’t have to?

Unfortunately, I have to. The Queen says so.

The most exciting day of my life is probably tomorrow. The Queen’s Majesty has arranged a St. Valentine’s Ball and I must choose one of the three suitors the Queen has selected for me, to be my wedded husband. We’ll be handfasted once the lawyers have finished the contracts, and then I shall marry whoever it is properly when I’m sixteen. All three suitors are now at Court, ready for tomorrow.

I wish I didn’t have to marry. I feel far too young to do so but, being an heiress, I must—though if I were a commoner I could wait until I was as old as five and twenty!

Mary Shelton just came in and made moan to me
about Lady Sarah not wanting to walk the dogs—even though it is her turn. I see an opportunity. I must run!

I am writing this in bed because Lady Sarah and Mary Shelton aren’t here yet and I cannot sleep.

My favourite place in all of Whitehall Palace is behind the compost heaps at the end of the Orchard. I must have a care when I go there because if the other Maids of Honour or Ladies-in-Waiting knew about it, they’d tell the Mistress of the Maids, Mrs. Champernowne. And then she would tell the Queen, and Her Majesty would have to know about it officially, instead of just unofficially as she does now.

So when I want to go there, I generally volunteer to take the Queen’s little dogs for a walk. Everyone knows I’m the only one of the Queen’s Gentlewomen who actually likes them. They’re small and hairy and smelly and quite fierce and a bit snappy if they don’t know you—but I never have any trouble with them. They like me.

That was why I had to stop writing earlier: I had
to run downstairs and find (my very pretty Lady and doesn’t she know it?) Sarah Bartelmy. She was standing by the door to the Privy Garden with her face as sour as week-old milk, because
she
had been told to walk the dogs.

“What is wrong?” I asked, though I knew because Mary Shelton had told me.

Lady Sarah tossed her shiny copper hair and sighed. “The Queen bade me walk her dogs.”

“Oh, what fun!” I declared, knowing she wouldn’t agree. We play this charade with great regularity.

“But the wind is raw and there’s a frost upon it,” she complained. “And my mother sent me rose-water and almond oil to see if that will help my spot, and now I’ll not have time to try it!”

Lady Sarah does have a spot on her nose, but it’s not that big. She makes such a fuss about spots.

“Please don’t trouble yourself. I will take the dogs out for you,” I said kindly. “You must look your best for the ball.”

For a moment Lady Sarah smiled at me quite pleasantly. Only for a moment, though. “I suppose you like galloping around with the horrible smelly little creatures,” she observed.

I ran up to our bedchamber—I share it with Lady Sarah and Mary Shelton—to change into my old green woollen hunting kirtle that’s a bit short for me now. I couldn’t walk the dogs in my white damask bodice and kirtle with the false front embroidered with roses. It was embroidered by my dear mother and is precious.

I didn’t bother the tiring woman to help me—I can do it myself since I have all my bodices lacing up the front. I left my damask on the bed because I was in a desperate hurry to get out in the Orchard before it started getting dark. I pulled my boots on, grabbed my cloak, then rushed back downstairs again.

This time Mrs. Champernowne caught me on the back stairs. I think she lies in wait for me. “Lady Grace!” she shouted. “Lady Grace! Stop at once and wait!”

She’s Welsh, you know, and very strict. But I have to be respectful to her, because she’s served the Queen longer than anyone else—since Her Majesty was just Princess Elizabeth and everyone thought she’d be executed. So I stopped and curtsied. I knew exactly what she was going to say. And she did.

“Lady Grace! When will you live up to the pretty name your poor mama gave you? How many times do I have to tell you not to clatter down the stairs like a herd of cattle?”

Silly old moo, as if cows could run downstairs.

“Sorry, Mrs. Champernowne,” I said meekly, though I wasn’t sorry because I
don’t
clatter. I was going as quietly as I could and it’s not my fault my outdoor boots have hobnails in them.

“Now walk, child, look dignified. What would the Queen say if she saw you like this? Why cannot you be more like Lady Sarah?”

Oh yes, be like Lady Sarah Copper-locks Bartelmy and squeal every time I see a spider and have nothing in my head except how white my skin is and how shiny my hair is and whether some idiotic young gentleman is writing stupid sonnets to my chest. Hah!

I didn’t say that, though it was a struggle. I said, “Yes, Mistress Champernowne.” And curtsied again and walked as gracefully as I could with my knees bent, so she wouldn’t spot just how too short my old kirtle is and make me go and change again. Then once I was round the corner I ran even faster to make up for lost time.

I came puffing out into the Queen’s Privy Garden, which is all formal and deadly dull. Lady Sarah was standing under a tree, her face covered with a scarf to protect her complexion, scowling at Henri, who was lifting his leg against one of the roots.

“What took you so long?” she sniffed.

“Mrs. Champernowne caught me running and told me to be graceful like you.” I said this with a straight face so she couldn’t be sure whether I was being sarcastic or not. Though I’m not sure Lady Sarah Bartelmy actually knows what sarcasm is.

She sniffed again, gave me the leash, and hurried off back to the palace before the cold air could damage her white skin any more.

I kept the dogs on the leash in the Privy Garden so that they couldn’t go digging up hedges from the maze as they did last time. They were so happy to see me; they were barking and bouncing round me and bringing me interesting sticks. I walked as sedately as I could down the path, past the big fountain that was still frozen, and on to the gate into the Orchard.

One of the Queen’s Guard was there, guarding the gate from ferocious apples probably. He was
looking miserable, his nose bright red and dripping from a cold. It was his own fault: he was too vain to put on his cloak and hide his wonderful crimson doublet and puffed velvet hose, and his white stocking hose on his handsome legs and his smart, polished high boots. I expect he was hoping Lady Sarah would walk past him, or maybe that the Queen would come by and admire how handsome he is—all the gentlemen hope for that.

“Will you open for me, sir?” I asked with a curtsy.

He sighed, turned the key, and opened the gate. He didn’t even bow! He would have for Lady Sarah, I believe, if only to get in a stare at her dugs. Not for me, though. My body hasn’t started to develop in that way yet. So I curtsied to him anyway, because the more you curtsy to people, the more they’ll do for you, so it’s worth the wear on your knees.

“Will you be riding with Sir Charles later today, my lady?” he asked me.

I’d completely forgotten about it. Hell’s teeth! (It’s a good thing Mrs. Champernowne can’t see how much swearing I do in my head.) I don’t really like horses much, but Sir Charles is one of my suitors and he’s quite fun, even though he is old and plump and puffs a bit. Really he is happiest when he
is at home on his country estates. He never feels very comfortable at Court, but he has been staying here to teach me to ride better—the Queen doesn’t want me falling off again the next time we go hunting. And he’s a good teacher. He never shouts and he explains things as often as I need, and the horses really like him. But as a husband—Lord preserve me! (That’s not swearing, I checked.)

“Later,” I said, and swept past with the dogs towing me excitedly.

The Orchard isn’t nearly as tidy and formal as the Privy Garden. There are apple and pear and cherry trees—some of them quite climbable if I hitch up my kirtle over my belt—and redcurrant bushes and raspberries and brambles and some herbs that escaped from the kitchen gardens. Most of the time you can’t be seen from the palace.

Well, the Queen can see from her bedchamber window, if she’s standing in the right place. She saw me playing in the Orchard once, sword-fighting with a raspberry cane, which amused her. She has ordered that the gate be kept locked except to me, mainly to keep the older Maids of Honour and their gentlemen out of it—because they are empty-headed nitwits who are liable to ruin their whole lives for a
pretty locket and some bad verse. Or that’s what the Queen says.

A Famine of Horses by P. F. Chisholm
The Hipster Who Leapt Through Time (The Hipster Trilogy Book 2) by Kondor, Luke
The Ivory Rose by Belinda Murrell
Bring the Rain by Lizzy Charles
Hollywood Scream Play by Josie Brown
Folk Legends of Japan by Richard Dorson (Editor)
Saturn Over the Water by Priestley, J. B., Priestley, J.B.
Offal: A Global History by Nina Edwards
Things Could Be Worse by Lily Brett
Blood Curse (Branded Trilogy Book 2) by Flannery, Kat