Read Assault on Alpha Base Online

Assault on Alpha Base 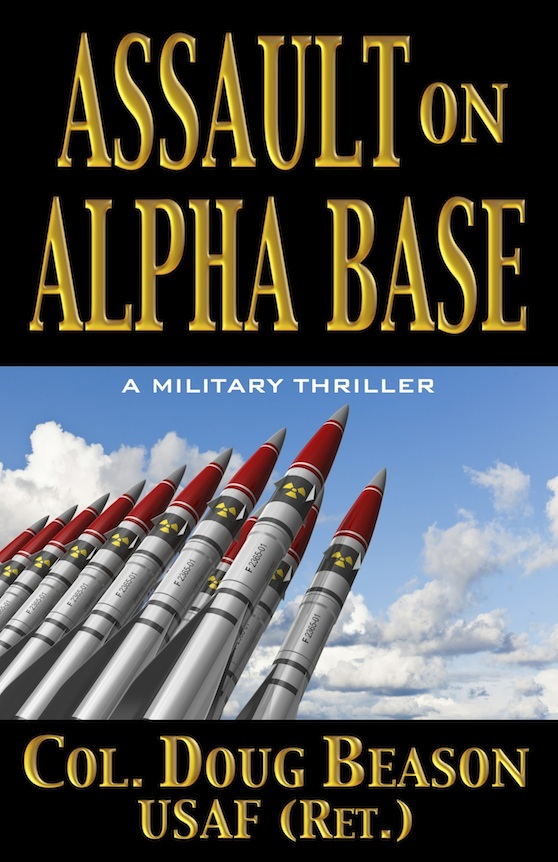 Alpha Base. It’s the home of America’s nuclear stockpile, over 5,000 warheads protected by a formidable high-tech security system deep in the salt flats of Nevada.

If Alpha Base is ever penetrated, no one on earth will be safe….

From the heart of remote Africa, a terrorist army has launched a daring plot.

Their objective: seize Alpha and steal its deadly cache of superweapons.

Their allies: American scientist Dr. Anthony Harding and his lover Vikki Osborrn, self-styled revolutionaries who’ll blast a pathway to the base from its own backyard.

Their adversary: Major William McGriffin, USAF; acting commander of the base.

Cut off from his command post, McGriffin must implement a surgically precise counterstrike to retake Alpha-knowing that if he makes one mistake, the entire world will pay.

ALPHA BASE
IS THEIR BATTLEGROUND

DR. ANTHONY HARDING:
The nuclear physicist was once an idealist who wanted to show the world right from wrong—but now his goals are money, power, and his own twisted glory…

VIKKI OSBORRN:
She used all her feminine charms to help her team get inside Alpha Base. Now, with an innocent man’s blood on her hands, there was no turning back…

COLONEL MACKLIN RENAULT:
The mercenary knew that people killed for different reasons. His reason was simple, unsentimental, and very profitable…

MAJOR WILLIAM McGRIFFIN:
As acting commander of Alpha Base, he missed the intoxicating freedom of flying jets. But recovering the hijacked nukes would be more exciting—and dangerous—than anything he’d ever known…

“A military thriller of awesome proportions … Experience this book!”

“Doug Beason’s chilling scenario could well be tomorrow’s shocking realism … A gripping tale of military professionals doing what they do best: fight!”

—M. E. Morris, author
of Alpha Bug
and
The Icemen

All rights reserved. No part of this book may be reproduced or transmitted in any form or by any electronic or mechanical means, including photocopying, recording or by any information storage and retrieval system, without the express written permission of the copyright holder, except where permitted by law. This novel is a work of fiction and has been substantially rewritten and revised from its original publication. Names, characters, places, and incidents are either the product of the author’s imagination or used fictitiously. Any resemblance to actual events, locales, organizations or persons, living or dead, is entirely coincidental and beyond the intent of either the author or publisher. The opinions expressed herein, explicit or implied, are purely those of the author and do not reflect the views of the United States, the Department of Defense, or the United States Air Force.

At the time of the original publication the author had never been involved in or had access to, either officially or unofficially, any aspect of nuclear weapons storage, security, transportation or safeguards; this new edition has not changed those original concepts. This novel is based on pure speculation, gleaned from material assimilated from
Aviation Week and Space Technology
and
U.S. Nuclear Warhead Production,
Vol 2,
by T. Cochran,
el at,
Nuclear Terrorism,
by Leventhal and Alexander, and
Preventing Nuclear Terrorism
,
also by Leventhal and Alexander.

To Captain Jerry Allison, USAF Academy Class of 1976—friend and fighter pilot extraordinaire: his untimely death at REDFLAG was our nation’s loss.

To: Dr. Clifford E. Rhoades, Jr., for the idea for this novel; Kevin J. Anderson, Michael Berch, Esq., Alan R. Gould, Colonel “Moose” Millard, Major Dave Harris, and the 1550th Combat Crew Training Wing for their detailed help and suggestions; my agent, Richard Curtis; to my editor, Eric Tobias, for his patience and insight in making this book what it is; to Cindy, my wife, for her editing; and again to Kevin J. Anderson, for pushing me to rewrite this novel for e-book publication.

Language of the Air Force

Firstie—a senior, or First Classman at the USAF Academy

Hole in the Ground—Snack bar on Wendover AFB

Rated—a pilot or navigator, a flyer

On the strength of one link in the cable

Who knows when thou mayest be tested?

So live that thou bearest the strain.

Ronald Arthur Hopwood
The Laws of the Navy,
Stanza 5

Alpha Base: an auxiliary base located five miles due west of Wendover Air Force Base, Nevada

As the sun set behind craggy mountains, the clouds ignited in a candy cotton pink. Inside of an hour the dry desert air would plummet thirty degrees. A chill would set in, washing across the crater, driving cold-blooded reptiles to their lairs.

A set of four razor-wire fences, spaced twenty yards apart, ran behind the Ford Bronco. Airman First Class George Britnell sat in the truck, just inside the fourth fence. Separated by meticulously cleared sand, the fences symbolized all that Britnell hated about the Air Force: strict, confining, and mindless. Every fifty feet on the fences blue-bordered white signs screamed in red lettering:

WARNING! This installation is

Use of deadly force authorized

by order of the Installation Commander

The warning was repeated in Spanish.

Britnell drew in a lungful of smoke. Another minute and daylight would be gone. The infrared detectors embedded along the fence would then be able to detect even the innocuous glow from his cigarette.

The day shift was almost too easy. If he wanted to screw off, it was a simple matter of driving out here to the opposite side of Alpha Base, away from the gates and people. No one was stupid enough to approach the complex during the day. With the signs and warnings, you would have to be blind to come near. Even the animals had a sixth sense about the inside fence. You didn’t have to read to tell that the faint hum and smell of ozone yammered
120,000 volts of electricity
.

Britnell took a final hit. He stepped from the Bronco and ground the cigarette with his heel. “Yeah.” He pulled himself up and slammed the door.

The truck lurched off and found pavement. They headed around the meteor crater that held Alpha Base, following the fences.

Britnell unrolled his window. The smell of sage washed in, mixing with the sparse juniper and pinon pine covering the backside of the crater.

Below the crater’s lip concrete bunkers dotted the depression. Twenty feet wide and twelve feet high, the bunkers were set into the side of the half-mile-deep cavity. Searchlights squatted on top of each bunker, their glass covered by levered metal shutters. Yellow warning signs adorned the bunkers. The red international symbol for radioactive material was stenciled on each sign.

Row after row, clustered in groups of three and four, the bunkers covered the five-mile-diameter basin. Britnell had once counted over three hundred bunkers before stopping.

Wendover AFB was to the east; Britnell could make out the shimmer of runway lights on the main base.

Clayborn pulled the Bronco off the road. White dust swirled around them. “It’s been a while since we checked in. Do you want to make contact?”

“Yeah, I’ll make the call.” Britnell fumbled for the microphone. “Apple One, this is Busyfly validating our position. Our location is”—Britnell squinted at the marker set by the road—”Foxtrot Two Zero—I repeat, Foxtrot Two Zero.”

A moment passed. “I copy, Busyfly. Disengage your IFF now.”

Britnell reached under the radio and toggled the Identification Friend or Foe system, turning the device off, then back on. Originally developed so that Air Force fighters could distinguish between friendly and enemy planes, this sixth-generation IFF sent out a coded signal that directed the radar to ignore its presence; when the IFF was turned on, the radar and warning systems on Alpha Base would electronically mask the jeep’s presence from detection.

“I copy your position, Busyfly.”

“Roger that.” Britnell clicked off the mike and grinned. They continued around Alpha Base—

The truck lit up in a fireball of light and sirens. Searchlights punched through the dusk, bathing the crater and fences with streams of light. Sirens shrieked in the distance, running up and down the scale.

The radio squawked. Clayborn slapped down the gain, nearly ripping the set from its metal mooring.

Clayborn looked around frantically. “That’s right on top of us!”

“Where?” Britnell turned white. He brought his M-16 up and clutched the rifle with trembling hands. “Oh man, oh man—where is it? Where is it?” His stomach tightened.

Clayborn revved the engine and popped the truck into reverse. They spun, kicking up sand, and tore back toward the last marker. The marker loomed up, visible in their headlights. “Okay, you son of a bitch. Where are you? Come on.”

Three trucks screeched to a halt twenty yards away. They directed their headlights out toward the fences.

Britnell stuck his head out the truck. “I see something moving!” He pushed his rifle through the window.

“No, wait.” Clayborn jerked Britnell’s hand away from the trigger. “Look.” He pointed in front of them.

A white bob moved randomly along the fences, attempting to keep out of the searchlights. Two long ears and a brown body darted in and out of view. Britnell dropped his rifle in his lap.

“A
jackrabbit.”
Britnell sagged in his seat. “I thought they had gotten rid of all the false alarms. Half a billion dollars for a first class, one-of-a-kind security system, and it screws up. Animals aren’t suppose to trigger it.”

“Obviously not. Now aren’t you glad I didn’t let you shoot? Think what would have happen—”

“I know,” interrupted Britnell. “Setting off a weapon on Alpha Base is grounds for having my nuts cut off.”

“Unless you kill the poor bastard trying to get in. But jackrabbits don’t count. You owe me one.”

Clayborn keyed the mike and reported. “Apple One, this is Busyfly. The boogie was a rabbit; I say again, the intruder was a rabbit. Request permission to leave the hot zone and proceed with patrolling farside. We’ve had enough excitement for a while.”

The reply came back almost instantly. “Roger that, Busyfly. And thanks for the fast response. Sarge says you’re due to patrol outside the fence next shift for getting there first. That, and you’ve got yourself a pass for tomorrow night.”