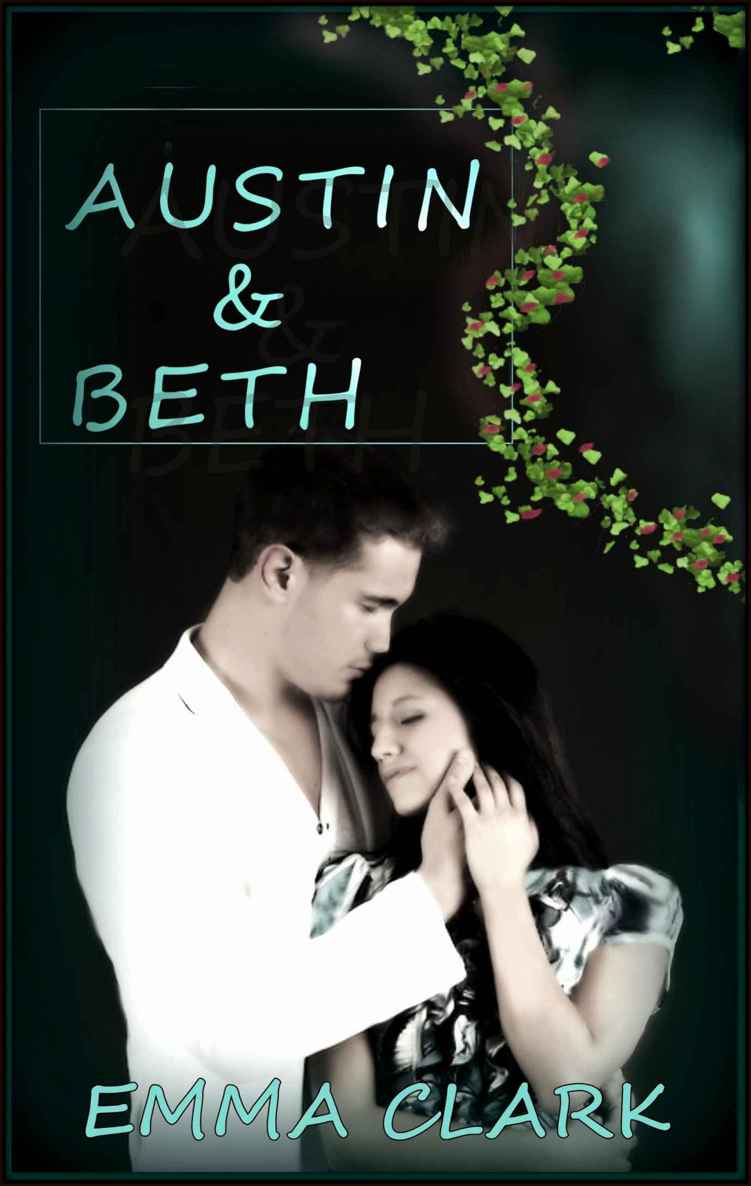 Other ebooks by Emma Clark

E
very bit as sleek and red-hot as his 2002 Camaro, Austin James Montgomery stepped out of his scarlet sports car.

And why shouldn't he look hot and amazing? This gorgeous, nineteen-year-old college freshman arrived home for the winter holidays. He'd be staying from December to January the sixteenth. I'd mixed feelings about his living here for a whole month, and some of these feelings I had to suppress—if I wanted to stay married.

A duffel bag swayed at Austin's side as he swaggered to the front door. He wore sunglasses, grey cargo shorts, a black T-shirt and leather jacket. He never knew how to dress properly for the season or weather. Why the hell would he wear
shorts
on such a cold day?

I bit my tongue trying not to laugh. Austin's legs probably felt like two blocks of ice. It made me shiver to look at him, though he was beautiful—as always. I watched through the window as he swiped off his sunglasses, tucked them in his pocket and poked the doorbell.

Music chimed, and my husband Joe went to answer. Meanwhile I stood there like an idiot.

Masculine laughter echoed. Joe stepped to the side as Austin appeared in the foyer, dropping the duffel bag at his feet. I couldn't help but watch his every movement. As usual Joe didn't notice my interest in his son. Why?

Because Joe didn't usually notice me.

Once a bashful kid, Austin poised straight and proud as if college life had given him confidence. Six feet tall, toned as hell, perpetually golden-brown skin; the entire drool-worthy package. Short in the back, rich chestnut hair fringed his forehead, blond and feathered at the tips.

Yep that was Austin, Joe's son from a previous relationship. In other words, this handsome male specimen was my step-son.

Shit. Makes me sound ancient and I'm only thirty-four, dammit.

Our eyes met and my body tensed.

Uh, hi Austin. How've you been?
Too bad the polite greeting wouldn't tumble from my lips. Not only had I lost my voice but I got hopelessly lost—captivated by twinkling eyes of dark aqua.

Joe must've sensed our uncouth connection. His gaze switched between Austin and me; then he shrugged it off, playfully slapped Austin's back.

“Great to see ya, Son. Beth cleaned and fixed up your room so it's all ready.”

"I'm gonna watch the football game, so you're welcome to join." Joe's smile collapsed when he turned and headed for the family room. He hurried past as if I weren't there.

Joe had never been much of an affectionate man, but lately he acted more aloof than ever. Once—
just once
it'd be nice for Joe to hug me, love me. To have and hold me like he'd once promised.

I needed to
feel
loved and wanted. By coincidence I noticed Austin's gaze on me, those iridescent eyes brightened by the overhead light.

“Hi Bethany.” His gaze grew chilly as he gave a curt nod.

Austin's emotionless demeanor confused me. His velvety tone made me dizzy. And what the hell was that delicious-smelling cologne he wore? A spicy sort of scent.

"Hi Austin. It's g—good to see you."
Please don't pass out.
I braced my hand to the wall, steadied myself.

He started forward. "Are you alright, Beth? You seem—"

"I'm fine, really. I just got dizzy for a second." Heat invaded my face.

“Ah, okay then. Anyhow it's good to see you too. I uh, also see you're showing.” He nodded at my stomach.

At about six months of pregnancy, my belly resembled a puffed-out balloon that obscured anything below.
Anything
. I no longer knew what my pussy looked like; I hadn't seen the fuzzy thing in ages.

And neither had my husband.

“Dr. Levy says the baby's healthy, growing well and everything,” I said.

“Did you find out the sex? Dad didn't mention it over the phone.” He crossed his arms.

"Nope. He never mentioned one word about it."

"We're having a little girl.” I grinned in that fleeting second, pushing aside irritation at Joe. Among
other
things.

“Oh, that's awesome.” Austin tipped his head and his lips curved in a smile. “Have you thought of any names?”

His grin widened. Emily was his grandmother's name; he'd spent half his childhood with her. Supposedly he even called her 'Mom'. Austin's real mother left when he was a toddler because she wasn't ready to juggle motherhood's demands. Or anything else.

"Sure. Be right there, Dad." Austin offered a final lingering look, eyes darkening like storm clouds.

He disappeared in the next room.

I hugged myself, peered out the window and remembered the day Austin left for Paden University. The same day he left me alone forever with his father, and all the light disappeared from my life. Just when I thought I'd adjusted, seeing Austin's face again proved otherwise.

T
he first week rushed by.

Austin and I politely avoided each other. In the meantime my asshole husband avoided
me
as much as he could.

Standing next to the kitchen sink, I took a break from washing dishes. Amused, I watched a tummy that tickled and quaked whenever Emily fluttered, stuck out a foot or pummeled my long-suffering ribs.

When I did chores I sometimes listened to music, and this minute Britney Spears's
Baby One More Time
blasted. Still one of my favorites, I'd owned the same CD since its release eons ago.

Joe strolled in, unshaven, brown hair messy as if he'd just woken. He'd actually been up since five that morning and now it's noon.

He fixed a bloodshot glare at me, folded his arms. Joe's receding hairline seemed to have receded an additional inch, and since October he'd added five pounds to his stocky frame. His weight was pretty average though.

Hell,
average
summed up everything about him. Average looks. Average personality. Average asshat.

Yep.
That
was my Joe.

"Turn that shit down," he barked, referring to the CD player on the corner hutch. "You're too old to be listening to that shit anyway. In case you haven't noticed, you're not twenty years old anymore." Joe smirked.

I capped my burning rage. Didn't want to give
him
the satisfaction. And—I didn't budge to turn down the volume.

Austin lurked beyond the kitchen, looking troubled as he peered in. Joe obviously hadn't a clue that his son stood behind him; therefore he continued his silly tirade.

"Since you're not gonna turn it down, I'll do it
for
you." He went and jabbed the volume control on the device. Britney's resonating voice faded to an occasional squeak.

Joe faced me, chuckling and gloating. "Bet you wish you were still twenty, eh? That why you listen to trash like that? To relive your lost youth or some bullshit?"

"Yes Joe," I calmly stated, though tears threatened beneath the surface. "That's why I listen to trash like this.
Exactly
why. I wish I could do it all over again. I'd do certain things differently."

That irked him. And when Austin emerged, Joe's glare followed him to the sound system.

Austin flicked up the volume and the end of
Baby One More Time
exploded.

A smile erupted on my face. I beamed it directly at Joe because now
I
was gloating. He grimaced, shot a glance at Austin.

Austin stopped the CD player and turned to his father. "So... let me get this straight. You're gonna dictate what kind of music Beth can listen to? Are you really gonna go there? Are you gonna try to control what songs she listens to because you think she's
too old
? What the fuck?" He wildly gestured to me.

"I'll watch my goddamn language after you explain this to me. What makes you think you can control your wife?"

"Careful, Son.
I'm
the one paying your college tuition."

"Oh, okay. Now you're gonna use your wallet as a weapon. That's just like you, Dad. It really is. It's how you operate and you never disappoint." Austin's mouth spread to an amused, nonchalant grin.

"Did you hear what I said?" Joe shouted, half-astonished.

"Yes Dad, I heard you." Austin got in Joe's face. "And—now I want you to hear
me
. You will not control your wife. You will not
dictate
what music she can or can't listen to. Got it? Don't be a dick to Beth. She doesn't deserve it."

Joe grunted. "Is that so? How do
you
know so much about Beth? Huh?"

I froze. Gooseflesh trailed my spine.

"For Christ's sake! We spent
three years
living under the same roof. Besides, anyone who knows Beth can plainly see what a great, caring person she is. But I guess someone as blind as
you
wouldn't notice."

"A little too invested in Beth, aren't you? Why is that?" Joe's frown deepened his facial creases. He stroked his bristly chin with two fingers.

Undeterred, Austin sustained eye contact and spoke slowly to emphasize his point. "Listen Dad. I'm not too invested in Beth or her happiness. I only want you to get along. I care about both of you. I want to see
both
of you happy, and if Beth's not happy, then you're not going to be. At least—I wouldn't think so. Right?"

Austin regarded me with a satisfied smirk. "Don't listen to him. You're not too old to listen to Britney Spears." He switched on the CD player. "And to me, you look like you're eighteen... except you're much prettier than any eighteen-year-old girl
I
know."

He flashed a sexy wink. Narrow hips suggestively swiveled as he strutted off, ass cheeks nice and firm under his white jeans.

Awash with feelings ranging from desire to fury, I gaped after him and clasped my hands below my gut.

It wasn't the first time Austin had defended me. It probably wouldn't be the last. He'd been blessed with an endearing, charming, protective nature. To know him—truly
was
to love him.

Along with that hot, tight ass.

Emily punted, snapping me to the present. All this frenzied movement from a tiny girl produced by immaculate conception.

I'd tried to get pregnant since the beginning, and Joe and I got married three years ago. We got along during the first two years, but months before I conceived, Joe and I began to drift apart.

After I became pregnant, Joe distanced himself further—as if suspecting the truth about my baby's paternity. How the hell
could
he know? Was there some indication in my eyes or mannerism that betrayed the secret?

Someday I might have to confess. I dreaded it. That'd be the day our marriage would officially end, and the thought of such a change terrified me. Conversely,
some
changes were good.