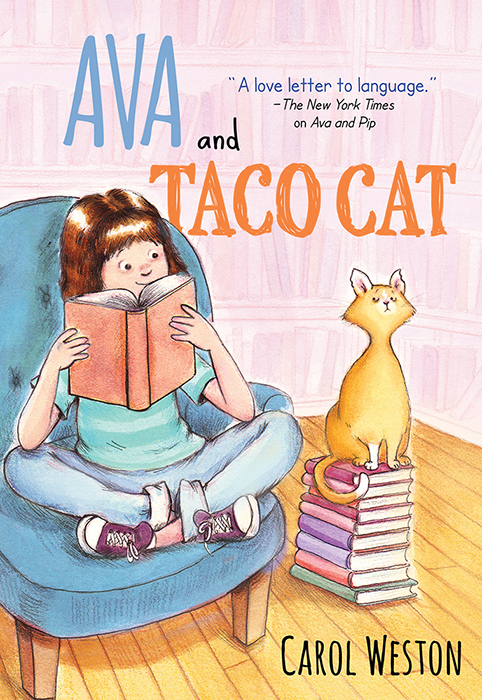 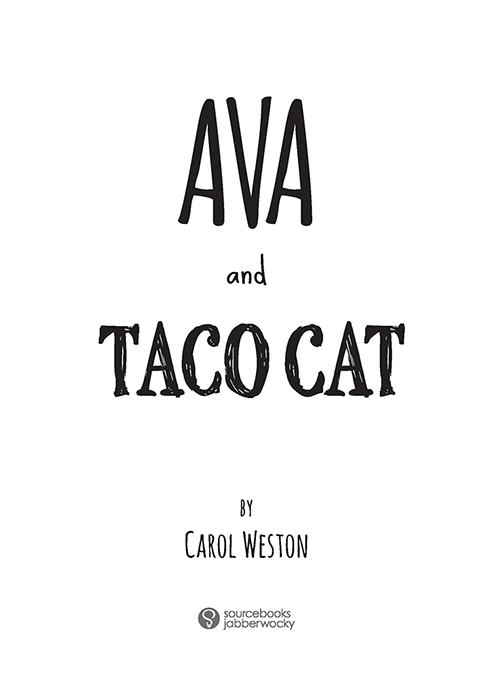 Cover design by Will Riley/Sourcebooks, Inc.

Summary: Fifth-grader Ava writes in her diary about her family, losing her best friend to a new girl, and adopting an injured, skittish, and very special cat.

To the cats in my life,

I'm really worried. At dinner tonight, Mom said that right before closing, a man came into the clinic with an injured cat. He'd found him shivering in a tree! The cat was scrawny and scared and his neck had a gash and his left ear was bitten up. The man got the cat down and took him to the nearest vetâwhich was Dr. Gross.

“I don't know,” Mom said. “Dr. Gross stitched him up and gave him antibiotics. If he makes it through the night, we'll call the shelter in the morning.”

Mom nodded. “I think a coyote got to him.”

“No idea. But he's neutered, so he's not feral.” Pip and I know that “feral” means wild, and “neutered” means he can't make baby cats. But does Mom know that stories about hurt cats and dogs make me sad?

“He's honey-colored,” Mom said. “But his right leg and paw are white, and he has a white zigzag above his nose.”

“No chip or collar or anything?” Dad said.

“No identification at all,” Mom said.

Soon Mom and Dad and Pip were talking about other things, including dinner, which was stuffed eggplantâ
blecch
! (Dad just started a terrible tradition of “Meatless Mondays.” Fortunately, tonight he also made plain bow tie noodles for me.)

Well, I couldn't stop thinking about how lonely that cat probably felt all by himself in a cage at Dr. Gross's. I wished we could go check on him. But no way would Mom agree to go back to work after she'd already come home and put on her slippers.

I was trying to imagine what it must have been like for the skinny cat when the coyote started attacking him. He must have known it was life or death. He probably thought he was a goner for sure! It was lucky he was able to scamper up that tree, but then he must have been too afraid to come back down! And maybe too weak? I bet he was starving as well as stuck and petrified! Poor little thing!!

Suddenly my nose and eyes started tingling. I blurted, “May I be excused?” but it was too late! Teardrops fell right onto my bow tie noodles.

“Are you
crying
?” Pip asked, surprised.

Dad gave my hand a squeeze, and I ran upstairs and splashed water on my face. I don't know why I was getting so upset about a lost honey-colored cat. But I was. I
am
.

It's just so sad to think of him all alone in a cage instead of a home.

After dinner, Pip came and knocked on my door, which was nice of her. She's been easier to talk to now that she's an official teenager. I think it's because she's been coming out of her shell instead of staying scrunched up inside it.

Anyway, she said, “Want to do another page?” so I said sure. Pip and I started making a book on the third day of winter break when we both got bored at the exact same time. I'm the author and Pip is the illustrator.

Pip is constantly doodling fish. Her favorite stuffed animal is an orange fish named Otto. She named it Otto for two reasons:

2. Otto is the name of the fish in
A Fish Out of Water
, which was the first book Pip read all by herself. (She has now read about a bazillion books.)

So far, our book is two pages long. It's called
Alphabet
Fish
, and these are the two pages:

A is for angelfish.

Shh! It is hiding among weeds, rocks, and things.

B is for bumblebee fish.

If you found this fish, would you name it Bumblebee?

It doesn't buzz or sting, but it's black and gold, you see.

Pip has already made a list of the twenty-six fish she wants us to do. C was supposed to be for clown fish, but I thought about the lonely injured cat and said, “C should be for catfish.” Pip agreed and drew a cute catfish with pointy whiskers.

I'm going to sleep now. I hope the lost cat is already asleep.

What I really hope is that he makes it through the night!

P.S. If I cross my fingers for luck, will they stay crossed while I'm asleep?

In three days, I turn eleven. If I could ask for any present in the whole wide world, I would ask for a pet. But a real pet this timeâone with fur.

Whenever I beg for a cat or a dog or even just a gerbil, Mom always says she has enough pets to worry about. She once admitted that the main reason she applied for her job as office manager for Dr. Gross was because the clinic is near our houseâ
not
because she adores animals.

I can't believe I've been alive for over a decade and have never had a real pet. I've never even had a bunny! Or a turtle! Or a frog!

The only pet Pip and I ever had was a goldfish named Goldy Lox, and we loved her, but she was not exactly Little Miss Personality. (I'm not even sure she was a she!)

Maybelle once had a frog. And last Christmas, she got one of those kits of chrysalides that turn into butterflies. This year, she got a makeup set, a manicure set, and beads for making bracelets. I don't get why so many girls in our class (including my BFF!) all of a sudden want to wear makeup, nail polish, and jewelry.

Maybelle even got a
sports
bra
for Christmas. When she showed it to me, I almost fainted on the floor. But I tried to act like it was no big deal.

Later when I told Pip about Maybelle's sports bra, I pointed out that boob (B-O-O-B) is a palindrome and that bras seem like booby traps. I also mentioned that “booby trap” spelled backward is “party boob.” Pip said I was being an immature idiot.

Pip thinks she's very mature because she is in seventh grade (I'm in fifth), and she has a boyfriend, Ben. He's our friend Bea's brother, and right now Bea and Ben are both in Chicago.

Our family is not going away on vacation. Mom says we're having a “staycation” in Misty Oaks.

I think “staycation” is a dumb word.

The reason we're not going anywhere is because we don't have a lot of extra money.

We aren't rich, but Mom and Dad say it's better to be
enriched
. That's why Pip takes art classes.

Mom and Dad have offered me writing classes, but I'd rather write just in you, my diary, because then I can write down all my secrets and private thoughts, and no one but me ever reads them.

So far in my life, I have started eight diaries and finished one. The one I finished last week is on my bookshelf. The other six are in my dead diary graveyard, underneath my underwear.

Here is a private thought: I
still
feel bad about what happened to Goldy Lox. Two years ago, I did not take good care of her. I accidentally overfed her, and she did not grow bigger and bigger like Otto in the picture book. She floated to the top, sideways and dead. I wanted to give her a proper burial, but Mom flushed her down the toilet. When I started to cry, she said, “Oh, Ava, it's only a fish.” Which was true.

But she was
our
fish.

Outside, some of the trees have snow on their branches.

Inside, Dad made snowman pancakes just for me. That's when he places three round pancakes in a line (not a stack) and adds chocolate chip eyes to the top one.

“Can you make me a cat pancake?” I asked.

“I can try,” he said, and he did try, but the tail and legs blobbed together, and the pancake looked more like an amoeba than a cat.

I said, “Do you know the Aesop fable âThe Cat and the Fox'?” Dad knows I like to read short fables more than long books, probably because 1) they are about animals, and 2) they give you a lot to think about in just a few pages.

A
fox
is
bragging
to
a
cat
that
he
knows
a
ton
of
ways
to
save
himself
from
hounds. The cat says he knows only one and asks the fox to show him more. The fox sticks his snout in the air and says, “Maybe someday if I'm not toooo busy.” Just then, a pack of hungry hounds comes bounding toward them, barking furiously. The cat escapes by racing up a tree and says, “This is my one and only trick. Which of yours are you going to use?” But while the fox is thinking and thinking, the hounds attack.

Dad asked what the moral was. I said: “It's good to have a plan.” Then I confessed that I was still worrying about the honey-colored cat who escaped up the tree, and I wished I had a plan..

When Mom came downstairs, I asked her if she'd called Dr. Gross.

Dad handed Mom a mug of coffee and mumbled, “You think the cat will have to be put down?”

Hello!
I know what “put down” means! It's a euphemism for “kill”! (I know what
euphemism
means too. It's a nice way of saying something not nice. It's also an extremely advanced spelling word.)

“Depends on his condition,” Mom said.

“Sweetie,” Mom replied, “Dr. Gross is not in the business of killing animals. He does everything he can to
save
animals. But if the cat isn't going to get betterâ¦”

“Please don't kill him!” I felt like Fern in
Charlotte's Web
when she tells her father not to kill the runty newborn piglet. (Note: Mr. and Mrs. Arable love their daughter Fern very much, so they let her keep the piglet, and she names him Wilbur.)

“I'll call you when I get to work,” Mom said. “And now I'd like to change the subject. Have you thought about what you want for your birthday?”

The King’s Justice by Katherine Kurtz
The Cowboy And The Debutante by Stella Bagwell
Orthokostá by Thanassis Valtinos
Three Sides of the Coin (Catherine I) by Lennon, Carole J
Holiday in Danger by Marie Carnay
Torn by Laura Bailey
The Highwayman's Curse by Nicola Morgan
Full Throttle by Wendy Etherington
The Score by Howard Marks
Mouse Soup by Arnold Lobel