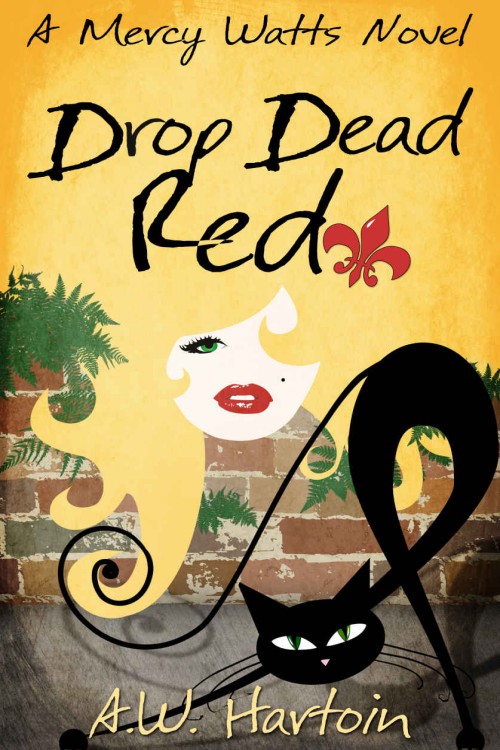 Mercy Watts is barely back in St. Louis before her hometown suffers the worst crime in a century, a mass murder at an Italian restaurant. This has nothing to do with Mercy and she’s determined to keep it that way. No news. No gossip. No evidence. No bodies. Mercy doesn’t want to know. But there are some things she can’t avoid, her family and her friends.
Officer Joey Ameche has a marker, and he’s calling it in, much to Mercy’s dismay. His sister needs help and Mercy’s expected to pay Joey back by clearing her from any involvement in the Tulio murders. That mass murder leads Mercy to her smallest criminal yet, a tiny bacteria with huge potential for murder. She traces that nasty bugger to New Orleans, her mother’s hometown, where the crimes keep adding up and the lies are thicker than Nana’s gumbo.
Contents

Also by A.W. Hartoin for Amazon

This book is a work of fiction. Names, characters, places and incidents either are products of the author’s imagination or are used fictitiously. Any resemblance to actual events or locales or persons, living or dead, is entirely coincidental.
All rights reserved. Except as permitted under the U.S. Copyright Act of 1976, no part of this publication may be reproduced, distributed or transmitted in any form or by any means, or stored in a database or retrieval system, without the prior written permission of the publisher.

Flare-up (An Away From Whipplethorn Short)

A Fairy's Guide To Disaster (Away From Whipplethorn Book One)

A Monster’s Paradise (Away From Whipplethorn Book Three)

A Wicked Chill (Away From Whipplethorn Book Four)

A Good Man Gone (A Mercy Watts Mystery Book One)

Coke with a Twist

It Started with a Whisper (Sons of Witches)

For New Orleans, my favorite American city and home to a part of my heart.

MY PENANCE WAS about to begin. Or rather, it would begin if I ever got out of my truck. The convent sat on a hill under low clouds, fat with snow. With its high stone walls and arched windows, it could’ve been transported from Provence. The convent was beautiful, a place of hope and tranquility, but it contained the terror that was my Aunt Miriam.

My family had kept the truth from her for as long as they could. But news of my modeling contract with the bad boys of rock, Double Black Diamond, had finally slipped out at my Aunt Tenne’s birthday party last week, thanks to my so-called partner, Aaron. He’d been bragging about being hired to cater the shoot, and Aunt Miriam’s sharp ears picked it up. Honestly, it was almost a relief. It’d been a month since I’d signed, and I kept waiting for the sound of a cane hitting my door with everything an elderly nun could muster. She might actually hit me with that big stick. It wouldn’t be the first time. She was much fonder of it than she was of me. Like with a spanking, the waiting was the worst part.

Now the waiting was over. I’d been summoned to the convent for lunch. I didn’t know what to expect. This had never happened before. There could be a bunch of nuns with canes waiting for me. Canes are big with my aunt’s friends. I could just hear their hushed accusations. “You’ve disgraced the name of Watts.” “Your poor parents. How could you?” “Mercy Watts, you are now a brazen hussy.” People considered me a hussy no matter what I did, but I still didn’t want to hear it again. Especially not from a nun. That’s why I was sitting in my truck, wasting gas and praying that something would happen to stop me from going in the convent.

Nothing did, of course. But I could just leave. Nobody would stop me. My best friend, Ellen, needed me to…to take her to someplace that was imperative. Not good. I had the flu. No, no. I was at risk for Ebola. I was a nurse. That was perfect. I could avoid Aunt Miriam and her dreaded disapproval and lengthy lectures on decorum for weeks. Finally, irrational fears were working out for me. I grabbed the gearshift and smiled.

I screeched like someone put an ice cube down my back and looked out the window, then I screeched again. Aunt Miriam stood at my window with her cane raised up, ready to strike my window a second time.

I gave her a rather limp finger wave and she rapped my window in response. I kind of wished I had a communicable disease. An isolation ward was sounding pretty good. I cranked down my window slowly. One of those times when having a vintage truck paid off.

“What are you doing out here?” asked Aunt Miriam with frozen breath streaming out in a rush.

“You’ve been out here for fifteen minutes. I don’t have time for this. We have a situation to discuss.” Steam jetted out of her nose, making her look dragon-like in appearance as well as character.

“I’m sorry. I know I’ve disappointed you,” I said in my best repentant tone.

“I’m not best pleased with your recent shenanigans, but that’s not the situation I want to talk about. Get out of this truck.”

I shut off the engine and climbed out like I was older than Aunt Miriam. “So what’s the situation?”

She hit me. Her spindly arms hauled back, she assumed the stance of a major league baseball player, and she whacked me good on the shoulder.

“Ow! You said it wasn’t about the modeling,” I protested.

“It isn’t. It’s about your godmothers.” Aunt Miriam planted her cane on the icy blacktop and glared at me.

“What happened to Myrtle and Millicent?”

Her cane went back to hitting position again.

Aunt Miriam dropped the cane and gave me a piercing look. “I know you will.”

“Then why’d you hit me?” I asked, trying not to whine. She hated whining worse than bikini shots and that was saying something.

“How else will you ever learn? Nothing else has worked.” She turned around and marched up the stairs to the convent.

I wanted to protest, but I would definitely remember that pain the next time I was tempted to do something the family wouldn’t approve of. I would probably still do it, but I’d remember.

“Are you coming?” she yelled over her shoulder.

“Are you going to hit me again?”

It didn’t. I had to go, or my mother would demand a reason why. Saying that a ninety-pound nun might hit me wasn’t going to cut it. So I followed, keeping myself out of cane range. Mom would say that you can’t pick your family. Obviously. Nobody would pick this.

It took a good twenty minutes to get to Aunt Miriam’s studio apartment in the elder wing. We were slowed down by several novitiates, wanting to say hello to Aunt Miriam and asking advice about prayer and whatnot. They smiled, their earnest faces glowing with goodness that I could never hope to aspire to. Even more disconcerting, was Aunt Miriam. She smiled. She took their young hands in her wrinkled age-spotted ones and counseled them warmly. What the heck? The woman just whacked me with a cane.

One sister, with a pink round face surrounded by her snug veil, took my hand as we passed by and said, “You are so blessed to be Sister Miriam’s niece.”

“I wonder why I’m so blessed all the time,” I said in all seriousness.

“It is His will and I will endeavor not to envy you in your blessing.”

“You should never envy me,” I said, thinking of my aching shoulder.

The sister hugged me and hurried after the other novitiates. I watched them go and, for the first time, wondered if a religious life wasn’t the sanest choice for someone like me. No. It would never fly. Nobody would buy me as a nun. They barely bought me as a nurse, even when I was wearing scrubs and a hospital badge. Vows were out.

I caught up with Aunt Miriam at her door as she was turning the big brass key. She eyed me. “What did you say to Sister Clarence? I hope you didn’t crush her spirit. She has a warm, generous heart.”

“I don’t crush people’s spirits. Why would you say that?”

“You wreak havoc wherever you go.” Aunt Miriam tossed her cane onto her love seat, she only carried it for intimidation purposes, and went into the little galley kitchen.

“I do not.” I watched her dig around and, to my dismay, pull out pimento loaf. I didn’t actually hate pimento loaf. It was more the idea of meat in a loaf that I hated.

“People die when you show up.”

“Not true. Nobody died in Honduras.”

“Nobody died in Colorado.”

“Close enough. That boy will never be the same.” She gave me the stink eye as if I was the one who did the deed. “I’ve been praying for him, and you should, too. It’s all your own fault that you’ll have to handle this situation. Your father’s too busy, thanks to you.”

“I’ll take care of whatever it is.” And I would, too. Dad was a retired police detective gone private. Business was always good due to my dad’s media presence and reputation, but, since my latest havoc-wreaking in Colorado, it’d gone through the roof. The name Tommy Watts was everywhere and somehow the media made it sound like Dad had sent me to Copper Mountain to save Mickey Stix’s wife, Nina, and solve an attempted murder. Dad had nothing to do with it, but it was paying off in new clients.

Aunt Miriam slapped together a couple of sandwiches and gave us each ten baby gherkin pickles. She put the plates on the tiny breakfast bar and ordered me to get the mustard and mayo out.

I put the mayo on the counter and found an empty mustard jar tucked away in the back of the fridge.

“Aren’t you going to ask me about your godmothers?” Aunt Miriam asked.

I already did, you crazy old bat.

“What happened with Myrtle and Millicent?” I asked, dutifully.

“What’s wrong with that mustard?”

“It’s not empty. I can get six or seven more sandwiches out of that jar. Microwave it.” Aunt Miriam hadn’t grown up during the depression, but you’d never know it. She never threw anything out. It was amazing that she hadn’t poisoned herself with her five-year-old salad dressings.

Eternal Captive: Mark of the Vampire by Wright, Laura
Broken Pieces (Cape Isle, #3): A Cape Isle Novel by Allie Able
The Predator by K. A. Applegate
Lou Mason Mystery 03-Cold Truth by Joel Goldman
A Joust of Knights (Book #16 in the Sorcerer's Ring) by Morgan Rice
Filthy (New Adult Romance) - #3 Fierce Series by Wild, Clarissa
For Time and Eternity by Allison Pittman
The Queen of Palmyra by Minrose Gwin
Carpathian by David Lynn Golemon
The Wharf by Carol Ericson