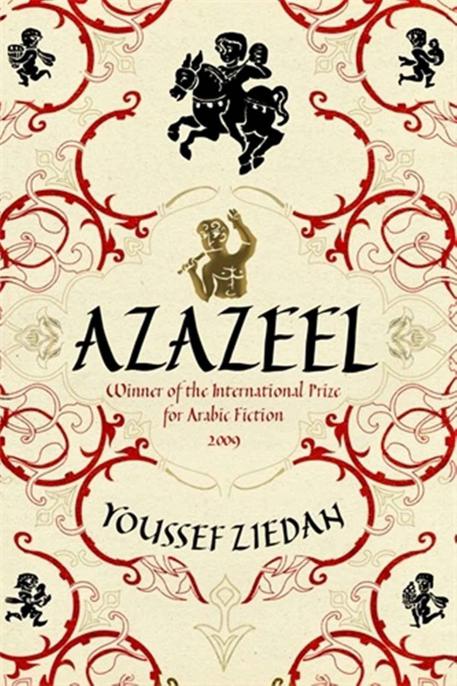 The moral right of Youssef Ziedan to be identified as the author of this work has been asserted by him in accordance with the Copyright, Designs and Patents Act of 1988.

The moral right of Jonathan Wright to be recognized as the translator of this work has been asserted by him in accordance with the Copyright, Designs and Patents Act of
1988.

All rights reserved. No part of this publication may be reproduced, stored in a retrieval system or transmitted in any form or by any means, electronic, mechanical,
photocopying, recording or otherwise, without the prior permission of both the copyright owner and the above publisher of this book.

This novel is entirely a work of fiction. The names, characters and incidents portrayed in it are the work of the author’s imagination and not to be construed as real.
Any resemblance to actual persons, living or dead, events or localities, is entirely coincidental.

A CIP catalogue record for this book is
available from the British Library.

Every man has his devil, even me,
but God helped me against him
and he turned Muslim.

A saying of the Prophet Muhammad,
cited by Bukhari

T
his book, which by my last will and testament, should be published only after my death, contains as faithful a translation as possible of a
collection of parchment manuscripts discovered ten years ago in the archaeological ruins which abound to the northwest of the Syrian city of Aleppo. These are the ruins which stretch for two miles
along the sides of the old road linking Aleppo and Antioch, ancient cities with origins dating back to prehistoric times. This paved road is thought to be the last stage along the famous Silk Road,
which in distant times started in the farthest reaches of Asia and ran its course to the Mediterranean coast. These manuscripts, with their writings in old Syriac or Aramaic, have survived in
exceptionally good condition, although they were written in the first half of the fifth century of the Christian era, or, to be precise, 1,555 years before our time.

The late Venerable Father William Cazary, who supervised the archaeological excavations there and who died tragically and unexpectedly in the middle of May 1997, thought it likely that the
secret of the survival of these manuscripts lay in the quality of the parchment, on which the words were written in black ink of the best quality available in that remote period, as well as the
fact that they were stored in the tightly sealed wooden box in which the Egyptian-born monk Hypa deposited them, preserving a record of a remarkable career, an unintended history of the events of
his troubled life and the vicissitudes of the turbulent age in which he lived.

Father Cazary thought that the wooden box, which was embellished with delicate copper ornamentation, had not been opened throughout the intervening centuries, which suggests that he, may God
forgive him, did not examine the contents of the box carefully, perhaps because he was wary of unrolling the parchments before they received chemical treatment, for fear they would crumble between
his fingers. So he did not notice in the margins of the manuscripts the occasional notes and comments written in Arabic in fine Naskhi script in about the fifth century of the Hijra era. It seems
to me that these were written by an Arab monk who belonged to the Church of Edessa, which adopted Nestorianism as its dogma and whose followers are known to this day as Nestorians. This unknown
monk did not want to reveal his name. (I have included some of his significant notes and comments in the margins of my translation, while others I have omitted because of their dangerous nature.
The last thing this anonymous monk wrote, on the back of the last parchment, was: ‘I will rebury this treasure, because it is not yet time for it to appear.’)

I spent seven years translating this text from Syriac to Arabic, but I then regretted my work on this story of Hypa the monk and I was reluctant to have it published in my lifetime, especially
as I was already feeble from old age anyway and my time was drawing to a close. The whole story consists of thirty parchment scrolls, written on both sides in a thick Syriac script in the old
tradition of writing Syriac which specialists know as Estrangela, the oldest and classical form of the alphabet. I have tried hard to find any information about the original author, the Egyptian
monk Hypa, beyond the facts that he relates about himself in his story, but I have found no trace of him in any of the old historical sources. Modern references are devoid of any mention of him, as
though he never existed, or rather he exists only through this autobiography which we possess. I have, however, confirmed the authenticity of all the ecclesiastical characters and the accuracy of
all the historical events which he mentions in this extraordinary document, which he wrote in an elegant hand without excessive indulgence in the flourishes encouraged by old Syriac writing in
Estrangela, a naturally decorative style.

The clarity of the script has enabled me in most instances to read the text with ease, so I have translated it into Arabic without worrying that the original might be defective or garbled, as is
the case with most writings which have survived from this early period. I must not omit here to thank the venerable scholar, the abbot of the Syrian monastery in Cyprus, for the important
observations he made on my translation and for corrections to some old ecclesiastical expressions with which I was not familiar.

I am not confident that this translation of mine has succeeded in matching the Syriac text in beauty or splendour. Not only was Syriac exceptional from this early date for the abundance of its
literature and the sophistication of its writing styles, but Hypa’s language and diction are a model of clarity and eloquence. Many long nights I spent pondering his incisive and expressive
phrasing and the succession of creative images which he conjures, all of which confirm his poetic talent, his linguistic sensitivity and his mastery of the secrets of the Syriac language in which
he wrote.

I have numbered the chapters of this story in line with the sequence of the scrolls, which naturally vary in size, and I have given the scrolls titles of my own devising to make it easier for
the reader of this translation, which marks the first publication of this text. For the same reason I have used in my translation the modern names for the cities which Hypa the monk mentions in his
story. So when he talks about the city of Panopolis in the heart of Upper Egypt, I have translated the name from the Greek to Akhmim, the name by which it is known today. The Syrian town of
Germanikeia I have rendered by the modern name of Marash, and the Scetis Desert by Wadi Natroun, the name by which it is now known, and so on for the other towns and places which appear in the
original text, unless the old names of these places have acquired a significance which the new names might not convey, such as Nicaea, which now lies within Turkey. Although it is now known by the
Turkish name Iznik, I have preferred to call it by its old name because of its special importance as the site of church councils. For it was in this city in the year ad 325 that the First
Ecumenical Council took place and the Egyptian priest Arius was condemned as a heretic, excommunicated and exiled. As for places which occur in the story and which are not well known, I have
included both their old and new names, to prevent confusion.

After the Coptic months and years which the writer mentions I have put the equivalent months and years according to the Christian calendar used today. In a few instances I have added essential
observations in brief and some of the Arabic comments which I found in the margins. I then appended to the story some photographs relevant to the events it relates.

M
ercy, my Lord. Mercy and forgiveness, our Father in Heaven. Have mercy on me and forgive me, for as you know I am weak. My merciful Lord, my hands
tremble in fear and dread. My heart and soul tremble at the vicissitudes and turmoil of this age. Yours alone is the glory, my merciful Lord. You know that I obtained these scrolls many years ago,
on the shores of the Dead Sea, to write on them my poems and my orations to You in my times of seclusion, that Your name may be glorified among those on earth, as it is in heaven. I had intended to
record on them my supplications, which bring me nearer to You and which may after me become prayers recited by monks and godly hermits in all times and all places. Yet when the time came to make
this record, I was about to write such things which had never before come to my mind and which could have led me to the ways of woe and evil. My Lord, do You hear me? I am Your faithful servant,
the perplexed, Hypa the monk, Hypa the physician, Hypa the stranger as people call me in my land of exile. And You alone, my Lord, know my true name, You and those in my first country, which
witnessed my birth. Would that I had never been born, or that I had perished in my childhood without sin, to be assured of Your forgiveness and Your mercy.

Have mercy on me, O merciful one, for I am fearful of what I am about, but I am under duress, for You know in Your farthest heavens how I am beset by the entreaties of my enemy and Yours, the
accursed Azazeel, who does not cease demanding that I record all that I have witnessed in my life. And what worth does my life have anyway, that I should record what I have witnessed in it? So save
me, O my merciful Lord, from his insinuations and from my own iniquity. My Lord, I still await from You Your signs, which have not come. I have bided my time for Your forgiveness, but so far I have
not doubted. If You wish, O You of sublime might and glory, to provide me with a sign, then I accept Your command and obey. If You leave me to myself, then I am lost, for my spirit has been put to
the rack, buffeted between the temptations of the accursed Azazeel and the torments of my longings after the departure of Martha, who helped to overthrow the inner regimen of my life.

I will kneel to You tonight, O Lord, and pray, then sleep, for You have created me prone to dreams for some secret reason. I will sleep a sleep full of dreams, and in my sleep send me from the
bounty of Your grace a sign to light my way, inasmuch as in my waking hours Your glad tidings have remained beyond my reach. If by your sign, my Lord, you bid me refrain from writing, then I shall
refrain. But if You leave me to myself, then I shall write. For, my Lord, I am but a feather tossed upon the wind, snatched up by a feeble hand intent on dipping the quill in the inkwell to record
everything that has befallen me, and everything that has happened and will happen with the Rebel of Rebels, Azazeel, to Your frail servant, and to Martha. Mercy, mercy, mercy.