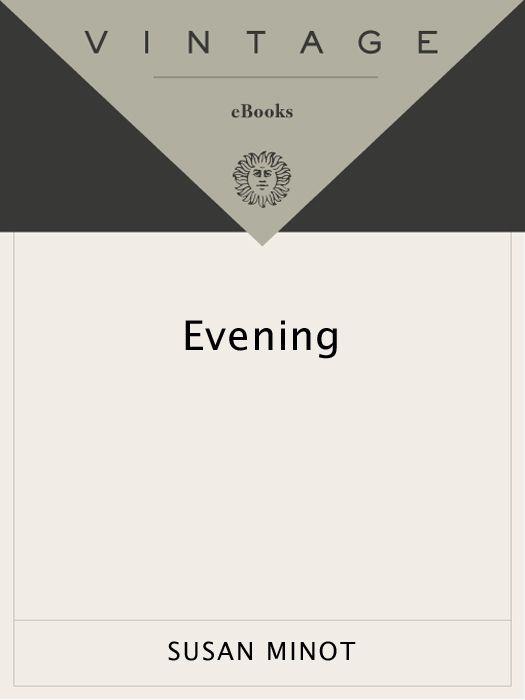 “Powerful … evocative…. It’s a marvel that [Minot has] done all this in one novel, and done it so well.”

“Her best work yet. Assured, supple, exhilarating in its nerve and cool momentum.”

“[Evening]
astounds in its craftsmanship and imprints itself indelibly on the heart…. A haunting work of art that moves at the pace of a suspense thriller.”

“A brilliant lyric performance. The heroine, nearing death, relives the most electric scenes of her life. She is a great diva singing the last aria of her first burst of love. Marriages and children followed, but that ecstasy is her final consuming spell.”

“Lyrical and dreamlike…. Minot once again proves how adept she is at capturing the pain and glory of falling hopelessly in love.”

“A philosophically complex study of memory and representation that will have readers itching to reread Proust and Foucault. Here Minot’s writing … achieves beauty.”

“[Evening]
has a cumulative impact that’s astonishingly powerful. I was left awestruck at the breadth of the authors talent.”

“In her powerful third novel Susan Minot mesmerizes with her convincing evocation of Lord’s final semiconscious state, wherein time and place crisscross, the lines between real and imagined blur, and the difference between resignation and regret is indistinguishable.”

“Minot’s finest sustained performance:
Evening
is an impressionistic portrait of a life filtered through one memory and rendered in prose that is measured, nuanced and often beautiful.”

“This is a stunning novel, one that should be studied for its originality.” 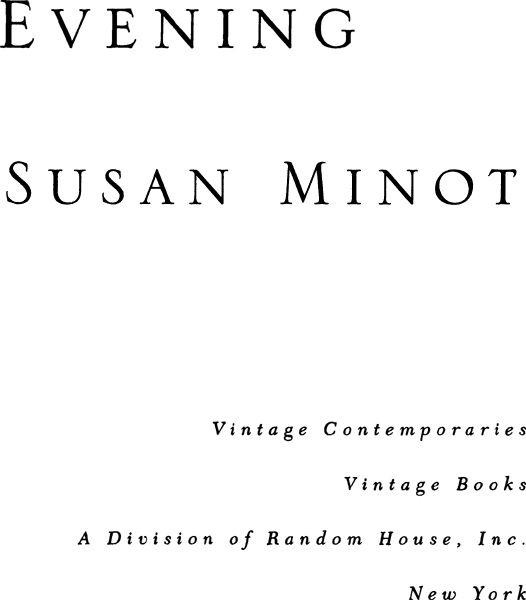 I give it to you not that you may remember time, but that you might forget it now and then for a moment and not spend all your breath trying to conquer it
.

Those who gave me the following places to write:

the shack at Shipyard Point, the balcony above the North Haven Casino, the green porch in the Wilderness, the screen windows on Sanctuary Lane, the upstairs room in Vineyard Haven, the sea-filled windows in Gay Head, the couch at Fair Oaks Farm, the kitchen table at Windy Gates, the moon view at Hidden Star Hill, the white box on Bay Street, the backyard at California Ave., the Balinese bed in Nairobi, the green chair above the Mara River, the blue veranda in Waa, the tower at Lake Naivasha, the terrace at the end of via dei Riari, the booth in Livingston Montana, the nearly all-red room on Koitobos Road, the back garden on Eleventh Street, the low table in Dar-es-Salaam, the rooftop at West Eighty-sixth Street, the corner room above Manchester Harbor, the rose bower on Frewin Road, the scallop shell on Moshup Trail, the stone house on Great Island and the summer barn in Chilmark
,

and to Dorothy for the chipped wicker chair where I sit at Ben’s feet
,

This book is for you
.

Swim of the Second Heart

A new lens passed over everything she saw, the shadows moved on the wall like skeletons handing things to each other. Her body was flung back over a thousand beds in a thousand other rooms. She was undergoing a revolution, she felt split open. In her mattress there beat the feather of a wild bird
.

W
here were you all this time? she said. Where have you been?

I guess far away.

Yes you were. Too far away.

They sat in silence.

You know you frightened me a little, she said. At the beginning.

He smiled at that.

You looked as if you didn’t need anyone, she said.

But those are the ones who need the most, he said. Don’t you know that?

Never too late to know something, he said.

Maybe not, she said. But too late to do any good.

She lifted the yellow suitcase and banged it against her leg. She dragged it over the polished floor. The ceiling of Grand Central towered above her with arches and glass panes and squares of sunlight.

She was not late and did not have to hurry. The clerk in the window bowed his forehead like a priest in confession and pushed her ticket through. Across the great domed room she spotted a redcap with a cart and though she usually would have carried her bag to save money decided this was a special occasion. She was on her way to a wedding. She signaled to him.

The redcap flung her suitcase onto his cart. Whoever you’re going to meet, he said, he’s a lucky guy.

The heat in New York had been terrible and the air underground at the gate was heavy and close. When the train came out of the tunnel she saw thunderheads turning the sky yellow and grey. The rain started, ticking the window with scratches then pouring over it in streams. Crowds of cat-tails surged in a wave as the train blew past. By the time they reached Providence the rain had stopped and it was hot again with a hot wind blowing in the open doors. The engine shut off and they waited in the station. No new passengers got on. It was as if the world had paused on this late morning in July. She held her book loosely and watched out the window.

The station in Boston was shadowed in scaffolding dark as a cave with bands of light on the paneled benches and few travelers. The redcap who took her bag was young and did not say a word. He pushed a contraption with a bad wheel and had trouble steering through the door. She came out of the damp entranceway into the brightness of the turn-around beyond where she saw among the parked cars the dark green woody. The doors were open and she saw in front Buddy Wittenborn and in the driver’s seat Ralph Eastman and a third person with his back to her. The person was standing with one foot up on the running board. When she got close Ralph
caught sight of her and jumped out of the car and Buddy looked over with a lazy smile. Only when she was near did the back turn around and the long leg come off the running board and she saw the man’s face. He was wearing squarish dark glasses so she couldn’t see his eyes. She noticed his mouth was full though set in a particular firm way, the combination of which affected her curiously. She felt as if she’d been struck on the forehead with a brick.

The person’s face seemed lit from within.

Ralph Eastman gave her a kiss on the cheek asking how was the career girl from New York and Buddy Wittenborn slid off the front seat and hugged her and ducked back turning his head and pushing his glasses back on his nose. He was wearing a disheveled shirt buttoned up wrong and a belt outside the belt loops and even with the beanie on his head looked as always handsome.

Ralph tipped the redcap, taking charge of the bags. She was trying to look at any other place other than at the person in the sunglasses.

Oh, Buddy said. This is Arden.

She was far enough away from the person that not to shake his hand was not rude. She didn’t dare shake his hand. Hi, she said and smiled brightly. Her handbag fell to the ground.