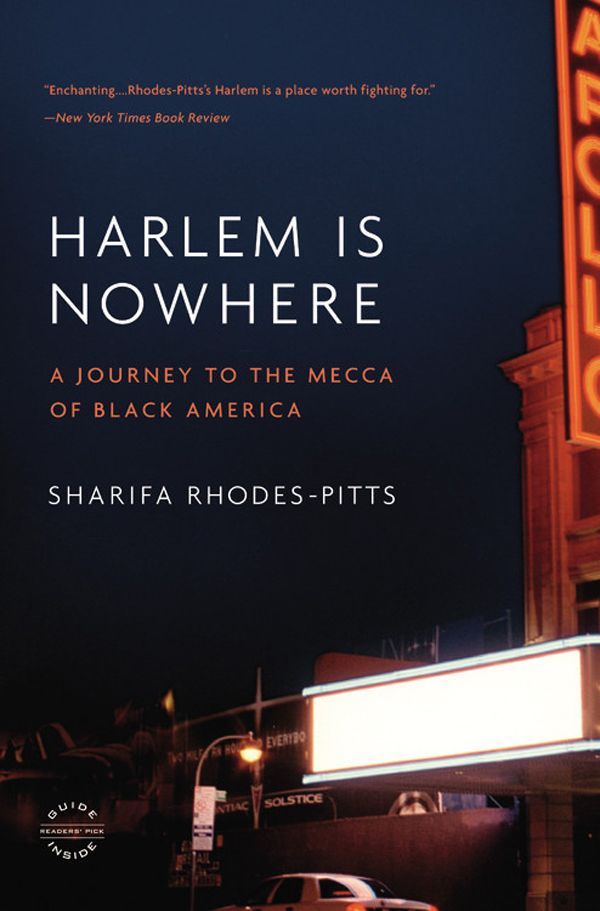 Dedicated to the memory of Minnie Davis (1923–2008), who told me to
stop and stare,
and to all the neighbors who looked after me on Lenox Avenue

“
The writer operates at a peculiar crossroads
where time and place and eternity somehow meet. His problem is to find that location.”

1
A Colony of Their Own

I HAD ALREADY
put the key into the door of my building on Lenox Avenue when the question came at my back. In one movement I withdrew the key and turned to face my inquisitor. He stood waiting for my reply and then asked again:
Do you think you’ll ever go home?

It was one of the neighborhood men who stand outside the front door during the day, sentinels keeping a vigilant watch. When I first moved here they were almost invisible to me; we did not speak and exchanged only the occasional nod. Neither I nor the men were being standoffish. There seemed to be an unspoken rule—perhaps a universal prudence for any strange girl arriving in any strange place—that I should come to know the women first. After I had been accepted by the women, the men began to make themselves known. By that point, the women had warned me about which men to avoid, I’d learned to discriminate between geezer flirtation and jive, and I could hold my own with the biggest jive talkers. Soon, I was drawn into a form of protection. My new friends declared this adoption at unexpected moments—one
or another of the neighbors would introduce me as their daughter. If I was stranded in the midst of an unwanted conversation with a persistent sidewalk suitor, one of the sentinels would swoop in to see him off. But if I came home accompanied by a man of my own choosing, I was later expected to give an account of his intentions, employment, and character.

Home,
he said again to my puzzled stare.
Down South. Do you think you’ll ever go back home?

It was a time when I was often in and out of the city. During phone conversations with friends, if I said I was
at home
they’d always ask,
Where?
But on this day, the man’s question came out of nowhere. As I’d approached the stoop he’d remarked,
Cold enough for you?
on what was a relatively warm day a few weeks before the start of spring. I’d responded,
Not bad, not bad at all,
noting how easily that banality passed my lips—approximating the tones of a northerner, feigning comprehension of their seasons. Maybe he sensed the falseness of my reply. Maybe that’s why he asked that question, presuming a desire I was not in contact with on that particular morning.

I answered cheerfully.
Home to Texas? But I go back all the time
… This sent him scattering into an apologetic retreat, as if he suddenly had a sense of invading my privacy.
Oh,
he said, and
Oh
, he repeated, as if the problem of my dislocation had suddenly been made right.

I did not ask him if he ever went home. I did not think of it until I was already in the narrow corridor that leads to the staircase that leads to my apartment, and now, in the act of recording it, this passing forgetfulness that he was also far from home strikes me as a failure of empathy. The yearning may have been more his than my own.

It was odd that he should think of me, even as I crossed my own threshold, as a stranger—someone on the verge of departure,
highly susceptible to the mere mention of flight. (I might at that moment have turned around and gone; I might just then have been thinking of it.) But it says much about the impermanent status of my residence here. My neighbors were accustomed to seeing me leave with luggage in the earliest part of the morning. I had maintained an innocence of city politics and refused certain hallmarks of the committed citizen of New York, like a red or black wire rolling cart for groceries, or a tabloid newspaper selected on the basis of the best horoscopes. I should not have been surprised that some of my neighbors on Lenox Avenue were still trying to understand my presence in their midst. On a different occasion, a different man from outside my door had asked where I was from. He was surprised—pleased, even—to hear I was from Texas.
Oh,
he’d said.
I thought you were a foreigner.

One restless, idle hour, I sat at the library on 135th Street and consulted
The Columbia-Lippincott Gazetteer of the World,
copying out the following entry, as if to gain my bearings:

Harlem: A residential and business district
of N Manhattan borough of New York City, SE N.Y., bounded approximately by Central Park and 110th St. (S), East R. (E), Harlem R. (NE), 168th St (W). Largest Negro community (pop. More than 400,000) in U.S. grew up here after 1910; one of the most congested districts in U.S., Harlem also has large colonies of Puerto Rican, Italian, and Latin American background. The Du. Settlement of Nieuw Haarlem was est. here 1658 by Peter Stuyvesant; in the Revolution, Continental forces stopped the British advance up Manhattan in battle (Sept., 1776) of Harlem Heights. Area remained virtually rural until improvement in 19th cent. of transportation
links with lower Manhattan. Public-housing projects (begun in 1930s) and other attempts to relieve unfavorable conditions there have been made.

At first it seems to give an all-encompassing view—complete with official borders, colonial heroics, and important urban planning highlights. Yet it manages to say nothing at all. In search of further detail I seized upon another definition, from the pages of
The Handbook of Geographical Nicknames.
This volume reveals that a city called Hankow
is “The Pittsburgh of China”; that “The Happy Valley” refers to war-torn Kashmir and to the riverine gorge cut by the Tennessee; and that the Harz Mountains of Germany, the location of the silver mines where Leibniz once toiled, is now or once was “The Stronghold of Paganism.” Situated near these is Harlem, whose nickname, “The Capital of the Negro Population of the United States,” was not nearly as catchy or evocative as I’d expected. Though the phrase lacks poetry, it retains an accidental precision: the outdated term “Negro” (already antique when the book was published, in 1980) fixes our attention on the past.

At the library I found another source of coordinates.
Harlem is blocked in
by the high ridges of Morningside Heights and St. Nicholas Terrace, by the East and Harlem rivers, and by Central Park
. Those declared boundaries did not tell me anything new. More important was the action of those physical frontiers:
Harlem is blocked in.
Geography is destiny.
The WPA Guide to New York City,
first published in 1939, goes on to describe who and what is blocked in by those ridges, those rivers, and that pastoral fiction of a park:

Negro Harlem, into which are crowded
more than a quarter of a million Negroes from southern states, the West Indies,
and Africa, has many different aspects. To whites seeking amusement, it is an exuberant, original, and unconventional entertainment center; to Negro college graduates it is an opportunity to practice a profession among their own people; to those aspiring to racial leadership it is a domain where they may advocate their theories unmolested; to artists, writers, and sociologists it is a mine of rich material; to the mass of Negro people it is the spiritual capital of Black America.