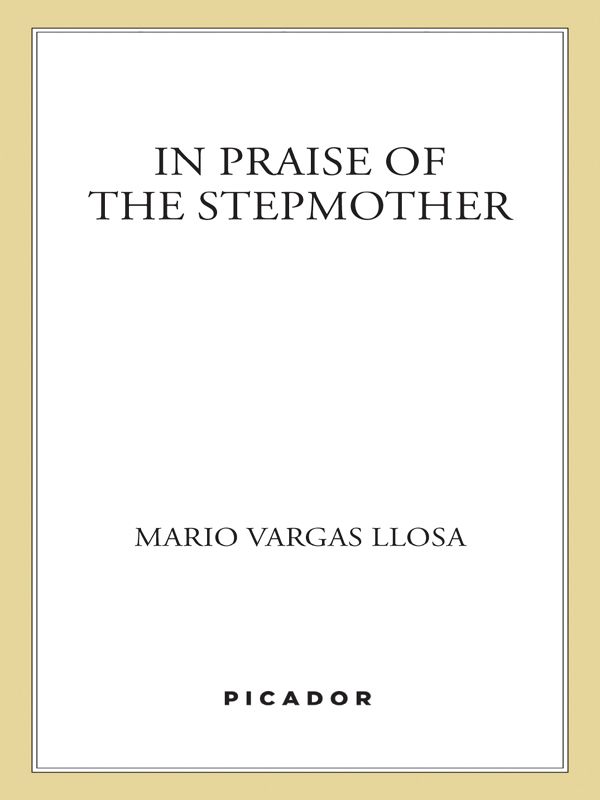 To Luis G. Berlanga
with affection and admiration

One must wear one’s vices like a royal mantle, with poise. Like an aureole that one is unaware of, that one pretends not to perceive.

It is only natures entirely given over to vice whose contours do not grow blurred in the hyaline mire of the atmosphere.

Beauty is a—marvelous—vice of form.

Five: Diana after Her Bath

Seven: Venus, with Love and Music

Eight: The Salt of His Tears

Nine: Profile of a Human Being

The day she turned forty, Doña Lucrecia found on her pillow a missive in a childish hand, each letter carefully traced with great affection:

I haven’t any money to buy you a present, but I’ll study hard and be first in my class, and that will be my present. You’re the best and the fairest one of all, and I dream of you every night
.

As she descended the carpeted stairs of the darkened town house on her way to Alfonso’s room, she thought to herself: I’ve won him over. He loves me now. And her old fears about the child began to evaporate like a light snow gnawed away by the summer sun of Lima. She had neglected to put on a dressing gown; she was naked beneath her thin black silk nightdress, and the full white curves of her body, firm still, seemed to float in the shadow illuminated here and there by glancing reflections from the street. Her long hair hung loose and she had not yet removed the teardrop pendants at her ears, the rings and the necklaces that she had worn for the party.

There was a light still on in the youngster’s room—Foncho certainly read far into the night! Doña Lucrecia knocked softly and went in: “Alfonsito!” In the yellowish cone of light from the little bedside lamp, there appeared, from behind a book by Alexandre Dumas, the startled little face of a Child Jesus. Rumpled golden curls, mouth agape in surprise baring a double row of gleaming white teeth, big wide-open blue eyes trying to bring her forth from the shadow of the doorway. Doña Lucrecia did not move, observing him with tender affection. What a lovely child! A born angel, one of those court pages in the elegant erotic etchings that her husband kept under quadruple lock and key.

“Is that you, stepmother?”

“What a nice letter you wrote me, Foncho. It’s the best birthday present anybody has ever given me, I swear.”

The boy had leapt from under the covers and was now standing on the bed. He smiled at her, his arms opened wide. As she came toward him, smiling too, Doña Lucrecia surprised—divined?—in the eyes of her stepson a gaze that changed from happiness to bewilderment and riveted itself, in astonishment, on her bosom. Good heavens, you’re practically naked, she suddenly thought. How could you have forgotten your dressing gown, you idiot. What a sight for the poor boy. Had she had more to drink than she should have?

But Alfonsito’s arms were now about her: “Many happy returns, stepmother!” His voice, fresh and carefree, made the night young again. Doña Lucrecia felt the slender silhouette of frail bones against her body and was reminded of a little bird. The thought crossed her mind that if she hugged him tightly to her, the child would break like a reed. With him standing on the bed, the two of them were the same height. He had twined his thin arms around her neck and was lovingly kissing her on the cheek. Doña Lucrecia embraced him, too, and one of her hands, gliding beneath his navy-blue pajama top with red stripes, made its way up his back, her fingertips feeling the delicate gradations of his vertebrae. “I love you lots, stepmother,” the little voice whispered in her ear. Doña Lucrecia felt two tiny lips linger on her earlobe, warming it with their breath, kissing it and nibbling it, playing. Alfonsito appeared to her to be laughing as he caressed her. Her breast was filled to overflowing with emotion. To think that her women friends had prophesied that this stepson would be the major obstacle for her, that because of him she would never be able to be happy with Rigoberto. Deeply moved, she kissed him back, on the cheeks, the forehead, the tousled hair, as, vaguely, as though come from afar, without her having really noticed, a different sensation suffused every last confine of her body, becoming most densely concentrated in those parts—her breasts, her belly, the backs of her thighs, her neck, shoulders, cheeks—exposed to the child’s touch. “Do you really love me lots?” she asked, trying to free herself from his embrace. But Alfonsito would not let her go. Instead, as he sang out in answer: “Lots and lots, stepmother, more than…” he clung to her. Then his little hands grasped her by the temples and thrust her head back. Doña Lucrecia felt herself being pecked on the forehead, the eyes, the eyebrows, the cheek, the chin… When the thin lips brushed hers, she clenched her teeth in confusion. Did Fonchito know what he was doing? Ought she to push him brusquely away? No, of course not. How could there be the least perversity in the mad fluttering of those mischievous lips that twice, three times, wandering over the geography of her face, alighted on hers for an instant, hungrily pressing down on them.

“All right, to bed with you now,” she finally said, freeing herself from the boy’s embrace. She did her best to appear more self-assured than she felt. “Otherwise, you won’t get up in time for school, sweetie.”

Nodding his head, the boy got into bed. He eyed her, laughing, his cheeks flushed a rosy pink, an ecstatic look on his face. How could there be anything perverse about him? That pure little face, those eyes filled with joy, that little body tucking itself in between the sheets and snuggling down: weren’t they the personification of innocence? You’re the corrupted one, Lucrecia! She pulled the covers over him, straightened his pillow, kissed his curls, and turned out the lamp on the night table.

As she was leaving the room, she heard him trill: “I’ll be first in my class and that will be my present for you, stepmother.”

“Is that a promise, Fonchito?”

In the intimate complicity of the staircase, on her way back to the master bedroom, Doña Lucrecia felt on fire from head to foot. But it’s not a fever, she said to herself in a daze. Could a child’s unthinking caress have put her in such a state? You’re becoming depraved, woman. Could this be the first symptom of old age? Because there was no question about it: she was all aflame and her thighs were wet. How disgraceful, Lucrecia, shame on you! And all of a sudden there came back to her the memory of a licentious friend who, at a benefit tea for the Red Cross, had given rise to flushed cheeks and nervous titters at her table when she told them that taking afternoon naps naked, with a young stepson raking her back with his nails, made her as hot as a firecracker.

Don Rigoberto was stretched out on his back, naked, on top of the garnet-colored bedspread with its repeated pattern of what appeared to be scorpions. In the dark room, lighted only by the glow from the street, his long, pale white silhouette, with a thick patch of hair at his chest and pubis, remained motionless as Doña Lucrecia took off her slippers and lay down at his side, not touching him. Was her husband already asleep?

“Where were you?” she heard him murmur, in the thick, drawling voice of a man speaking from out of a dream-fantasy, a voice she knew so well. “Why did you leave me, darling?”

“I went to give Fonchito a kiss. He wrote me a birthday letter you wouldn’t believe. So affectionate it almost made me cry.”

She sensed that Don Rigoberto scarcely heard her. She felt his right hand stroking her thigh. It burned, like a steaming-hot compress. His fingers fumbled about amid the folds of her nightdress. “He’s bound to notice that I’m soaking wet,” she thought uneasily. But it was a fleeting uneasiness, for the same violent wave that had startled her so on the staircase washed over her body once more, giving her gooseflesh all over. It seemed to her that all her pores were opening, waiting anxiously.

She heard him laugh excitedly, and she laughed, too. “Whatever are you saying, you idiot?” At the same time, she pretended to slap him, letting her left hand fall on Don Rigoberto’s belly. But what it touched was a human staff, rising and pulsing.

“What’s this? What’s this?” Doña Lucrecia exclaimed, grasping it, pulling on it, letting it go, catching hold of it again. “Look what I’ve found. What a surprise.” Don Rigoberto had already lifted her up on top of him and was kissing her with delight, sipping her lips, separating them. For a long time, with eyes closed, as she felt the tip of her husband’s tongue exploring the inside of her mouth, gliding along her gums and her palate, striving to taste all of it, know all of it, Doña Lucrecia was immersed in a happy daze, a dense, palpitating sensation that seemed to make her limbs go soft and disappear, so that she felt herself floating, sinking, whirling around and around. At the bottom of the pleasant maelstrom that she found herself, found life to be, as though appearing and disappearing in a mirror that is losing its silver backing, an intrusive little face, that of a rosy-cheeked angel, was discernible from time to time. Her husband had lifted her nightgown and was stroking her buttocks, with a methodical, circular movement, as he kissed her breasts. She heard him murmur that he loved her, whisper tenderly that for him real life had begun with her. Doña Lucrecia kissed him on the neck and nibbled his nipples till she heard him moan; after that, she very slowly licked those exalted nests that Don Rigoberto had carefully washed and perfumed for her before coming to bed: his armpits.

She heard him purr like a pampered cat, wriggling beneath her body. His hands hurriedly parted Doña Lucrecia’s legs, with a kind of exasperation. They placed her astride him, seated her in the proper position, opened her. She moaned, in pain and pleasure, as, in a confused whirlwind, she glimpsed an image of Saint Sebastian riddled with arrows, crucified and impaled. She had the sensation that she was being gored in the center of her heart. She could contain herself no longer. With her eyes half closed, her hands behind her head, thrusting her breasts forward, she rode that love-colt as it rocked to and fro with her, following her rhythm, mumbling words just barely articulated, till she felt herself dying, fainting, failing.

“The wife of the King of Lydia, my love,” Don Rigoberto burst out, lost in his dream.