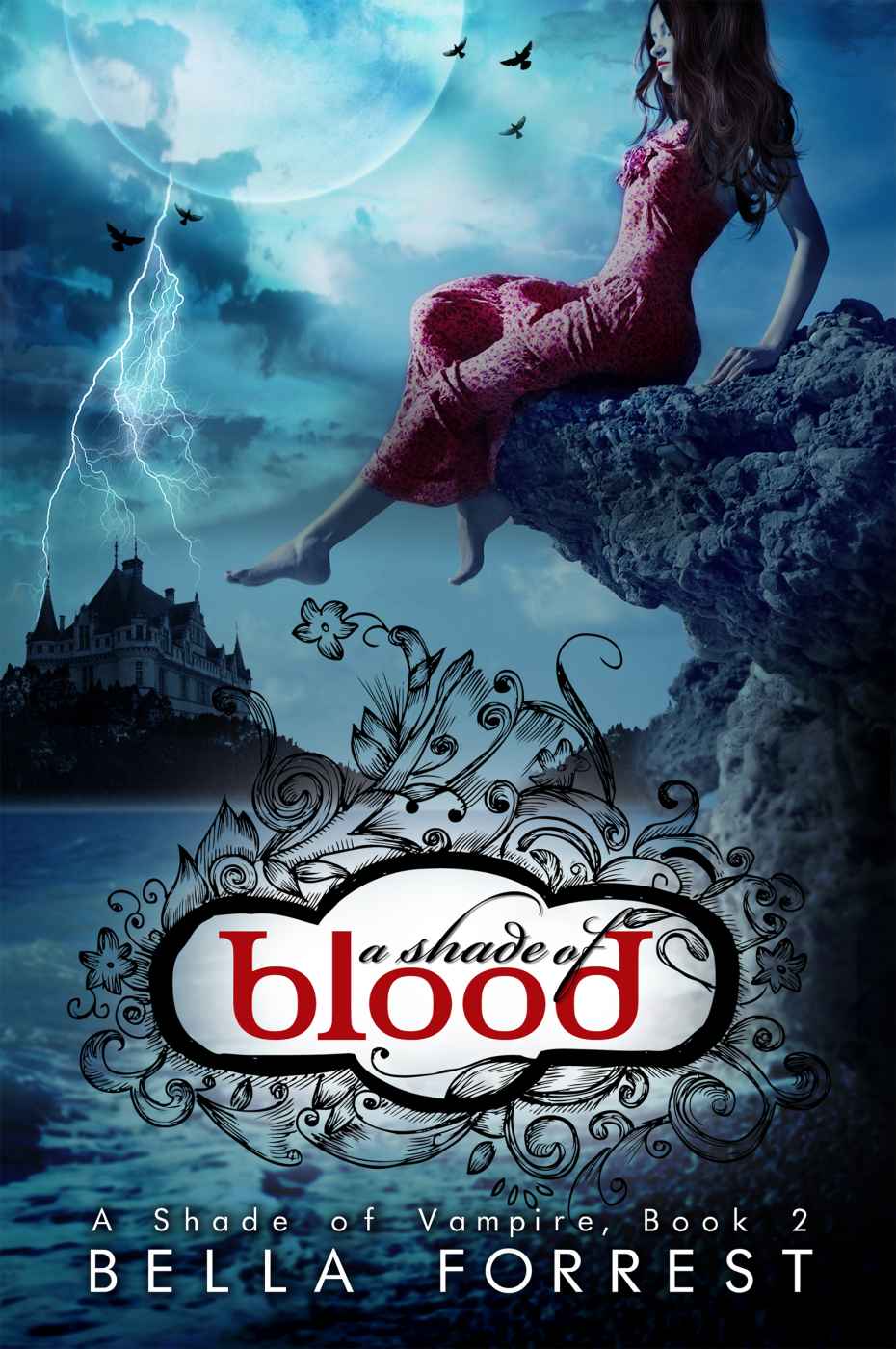 A Shade Of Blood

A Sha
de Of Vampire

ALL RIGHTS RESERVED BY AUTHOR

All characters appearing in this book are fictitious. Any resemblance to real persons living or dead, other than those in the public domain, is not intended and purely coincidental.

No part of this book may be reproduced, re-sold, or transmitted electronically or otherwise, without express written permission from the author.

To each of my wonderful readers.
Thank you so much for your kind words, support and endless encouragement
as I continue writing this series.

About A Shade Of Blood
●
Chapter 1: Derek

About A Shade Of Blood

When Sofia Claremont was kidnapped to a sunless island, uncharted by any map and ruled by the most powerful vampire coven on the planet, she believed she’d forever be a captive of its dark ruler, Derek Novak.

Now, after months of surviving an endless night, the morning sun may soon rise again for
Sofia. Something has possessed Derek’s heart and he offers her a gift no human slave has ever been given in the history of his cursed island: escape.

High school, prom and a chance to move on with her life now await her.

But will she be able to forget the horrors that steal her sleep away at night? … and the feelings that haunt her for that tormented prince of darkness?

A cold wind howled as it whipped through the giant redwoods surrounding us. The port was in sight. The sound of the ocean waves crashing against the island’s ragged cliffs was clearly audible – even to less sensitive human ears.

It wouldn’t be long until I’d have to watch her go. I knew the risks tha
t came with letting them leave The Shade. Still, I had no choice. She chose to go and I had to respect that decision. It hurt that she didn’t trust me enough to protect her; that she chose the human lad, Ben, over me, but I knew she would be safer if I let her go.

Yet holding her in my arms, with my lips still tingling from the kiss I claimed – perhaps even demanded – from her, I was aware of every curve of her
slim, fragile body flush against mine. My fingers were entangled with her long, soft auburn locks and her sweet scent invaded my senses. No other woman had ever made me feel the way Sofia Claremont did, and at that very moment, I couldn’t bear the thought of her leaving me.

Her beautiful, freckled face was buried against my shoulder as she broke down in
to tears for reasons I couldn’t fully understand. Each sob was cutting me to the core. From the corner of my eye, I saw Ben tentatively approach us. He had been watching us from the moment I pulled Sofia into my arms and pressed my lips against hers. I didn’t need to look at him to know that his eyes were screaming murder at the sight of me.

I ignored him. The only reason he mattered to me was because he mattered to
her
. I didn’t even trust him, but she did and that was supposed to be enough.

I shifted my focus back to
Sofia, sensing how her arms tightened around my waist, clinging to me in much the same way I was clinging to her. The motion gave me hope that yes… she might choose to stay.

“
Sofia…” My voice came out in a husky, breathless whisper.

My heart sank when she slowly pulled away from me. I was certain that she was about to say goodbye. Thus, I was surprised when she laid both hands on my shoulders, stood on her tiptoes and leaned into me, her lips gently
brushing against my own. It propelled all my senses into overdrive and it took all of my will power to not let my passions take over. I didn’t want to scare her, so I shut my eyes and let her take the lead. My fists clenched when our lips parted. I opened my eyes and found her emerald green gaze fixed on me. She was studying my face so closely – almost as if she were trying to memorize me.

I did the same. I committed every
part of her adorable face – her long eyelashes, every freckle, and every other detail – into my memory.

Sensing how deeply she had begun to mean to me, I was unable to keep myself from voicing out what was going through my mind. I knew it was selfish of me to ask it of her, but the words flooded out of my lips before I could second guess them.

I hoped that the words wouldn’t come
across as a command, that she would know them for what they were – a plea. I, Prince of The Shade, was begging her – supposedly my slave – not to leave me, because I knew without a doubt in my mind that her departure would only serve to plunge me deeper into the darkness that took over my life five hundred years ago when my own father turned me into the monster that I was.

The words took me aback as they
replayed over and over in my head. It almost sounded like a command and for a moment, it felt like I had no choice but to comply. It wasn’t until I looked into those electric blue eyes of his that I saw the statement for what it was. I bit my lip.
Is it possible that I really mean
that
much to him?

“I promise you, Derek
… I’ll never do anything to compromise you, to bring harm to The Shade…” I was babbling, trying to convince myself that he wanted me to stay for reasons that went far beyond my comprehension.

His face tensed – offended – as he shook his head. “It’s not about that, and you know it.”

“Then what is it about?” I needed him to give me a reason to stay. I wanted to hear it from his lips.

He gritted his teeth and ran a hand
through his dark hair. Derek Novak never was very good at expressing himself in words – that much I knew about him. Since the moment I first met him, there were only a few occasions I could remember when I was sure he was saying exactly what he was thinking. It seemed he spoke louder through his actions, and in a way, I admired him for this.

He opened his mouth to say something, but before the words could come out, someone grabbed my arm from behind.

My eyes were still fixed on Derek’s handsome face, the contrast of his blue eyes and pale skin never failing to make me catch my breath. I watched as his eyes darkened into a deep, dusky blue the moment Ben’s fingers coiled around my arm. I noticed the way his arm muscles flexed when his hands balled into fists.

I tried to break away from Ben’s grasp, but he held on fast.

“We don’t have time,” Ben hissed. “Say your goodbyes and let’s go.”

The expression on Derek’s face wasn’t giving me much reason to be confident about my best friend’s safety. After all, it wasn’t too long ago when much –
too much,
in my opinion – had been said about whom I belonged to.

Derek’s. Lucas’. Ben’s. It’s beyond me what I must do to make them realize that I’m neither object nor possession. I don’t belong to any of them.

I had to intervene before a testosterone-charged battle could spark. I turned to look at Ben straight in the eye.

Ben’s jaw tigh
tened. Before our captivity at The Shade, I would’ve done anything he asked of me, but The Shade had changed us both.

When his grip on me didn’t slack
en one bit, Derek took a step forward. “You heard the lady.” His deep, baritone voice took on a threatening tone.

I stared pleadingly at Ben, hoping that he wouldn’t try Derek’s patience.
Do you not realize that you don’t stand a chance against him?

Over the past few days since Derek forc
ed Claudia – Ben’s mistress at The Shade – to turn Ben over to his custody, I saw how Derek took great lengths to at least be polite to my best friend. Ben, on the other hand, being quite the stubborn fool, had done nothing but shoot cold and accusing glares at Derek. I’d been on edge trying to keep them apart, fearing a confrontation between the two egotistic young men.

He let go, but the pointed glare he sent my way showed he was not giving in. “Don’t even think about staying.” The words came through clenched teeth and with a slight shake of his head.

“
Sofia…” Derek spoke up as if to remind me that his opinion mattered too.

“I need time to think.” The words came out of my lips in what sounded like a growl.

“There’s no time for that.” Derek seconded.

Finally! You two agree on something.
I stood my ground and raised a brow. “Well, then make time.”

They exchanged glances for a moment. It was almost endearing how helpless both of them looked. A small smile threatened to creep over my face.
Who owns whom now?