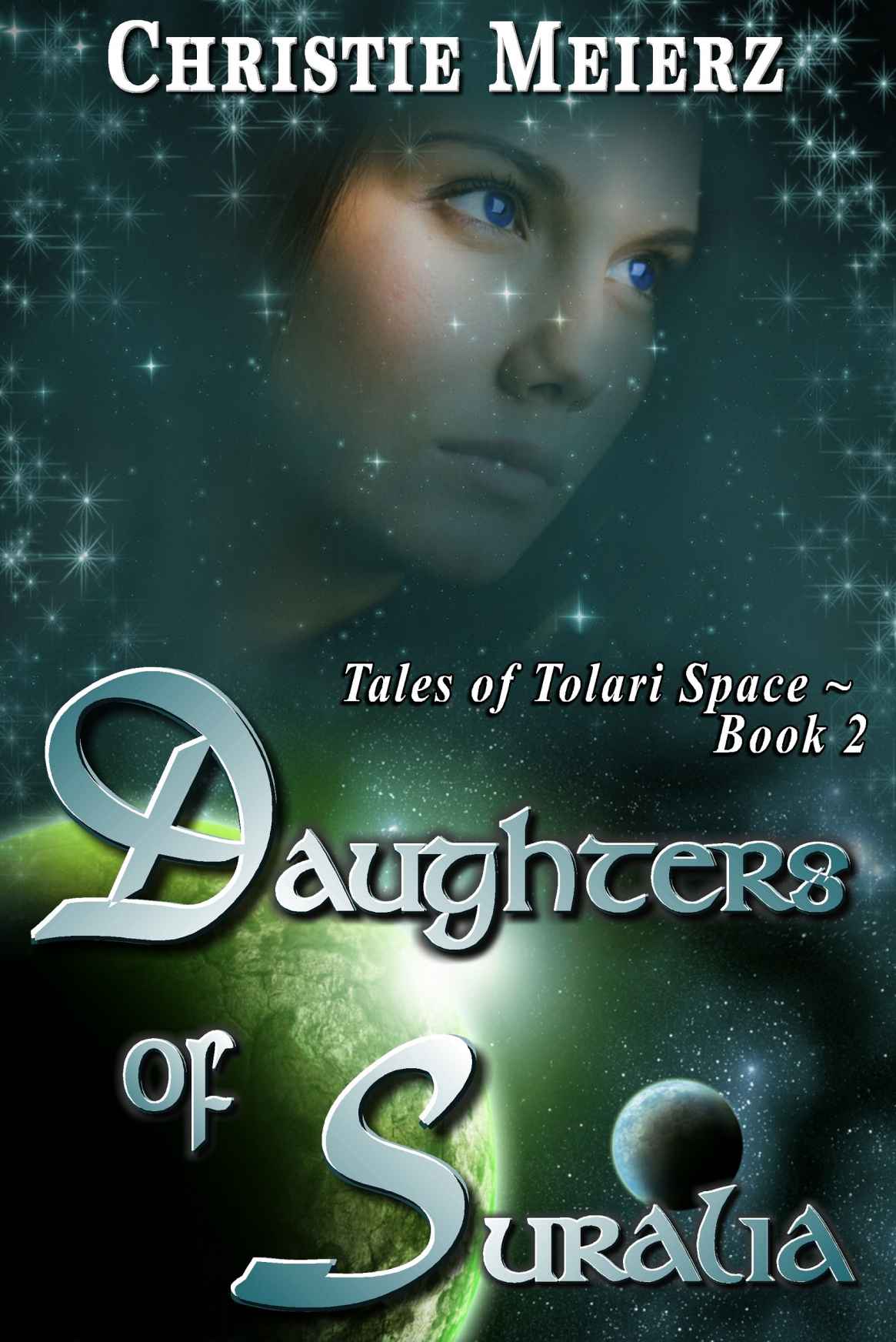 Daughters of Suralia
is a work of fiction. It is a
product of the author’s imagination. Any resemblance to any persons, living or
dead, organizations, or events is coincidental.

No part
of this book may be used or reproduced without the author’s permission, with
the exception of short excerpts used for the purpose of critical reviews.

First, I want to thank my husband, family, and friends for
putting up with my writing habit and giving me valuable feedback. I’d also like
to thank my editor,
Laurie Boris
, for her
fantastic work; Racheal Kline, my indefatigable reader; and
AC Flory
and
Anna Zaires
for their support. Special
thanks go to
Winry Carver
,
whose fertile imagination is populating my world with Tolari plants.

It looked like a bluish-green potato and tasted like an
apple. Except it did, and it didn’t. Kind of.

Marianne turned the succulent, oblong vegetable over in her
hands and bit into one end. Juice ran down her chin, and she took another bite,
sucking at it before it could drip onto the refectory table in front of her.
She nodded and smiled as she chewed the crisp flesh.
God
it tasted good.

A wisp of amusement tinged with disapproval wafted through
her, interrupting her enjoyment. She looked up in mid-bite. The Sural and his
young daughter, Kyza, both stared at her, their matching mahogany eyes sparkling
with suppressed laughter.

“What?” she asked. “Eat the same ten things every day for
eight standard years and then see how much you enjoy the taste of something
different.”

The Sural’s lips twitched; Kyza stifled a giggle. Marianne straightened
and wiped her chin with a cloth, continuing her meal in a more dignified manner.
Then she stared at her Tolari bond-partner with a gaze that promised
retribution. He lifted one corner of his mouth. Oh yes. There was going to be
retribution.

His smooth, bronze – and strikingly handsome – face went
impassive. She kept staring, trying her best to imitate the steady, penetrating
look for which the Tolari were infamous.

“Will you be in the garden later?” he asked. He looked bland,
but the empathic bond they shared meant that his emotions flowed through her as
if they were her own. He was amused ... and thrumming with anticipation.

She smirked. “Possibly,” she replied. “Or possibly not.”

He eyed her with a speculative gleam. Then he changed the
subject. “Have you given any more thought to finding an apothecary?”

“Pfft.” The rude noise escaped her before she thought to
stop it. Clearing her throat, she said, “I don’t see the need.”

“Your body is changing in subtle ways as you become Tolari.
You should be monitored.”

“So you keep saying, but I’m perfectly healthy. I’ve had no
difficulties at all.”

“I cannot understand your reluctance.”

“You should,” she snapped. “You’re the reason for it.”

His eyebrows went up, as embarrassment brought a rush of
blood to her face. He glanced at his daughter. She seemed to be done with her
meal.

“Go to your studies, child,” he said.

“Yes, Father.” Kyza slipped out of her chair and trotted out
the refectory door, headed for the family library and an afternoon with her
tutors. Just eight standard years old – about four Tolari years – the girl
spoke seven languages and was currently learning an intense overview of her
people’s 6,000-year history.

Marianne pulled her attention back to her bond-partner.
Is
the honeymoon over? It’s only been half a season.
She tried to get a grip
on her irritation.
It’s not entirely his fault
, she told herself, as she
switched to English. “I know you don’t have any concept or practice of medical
confidentiality here,” she said in a more reasonable tone of voice. “But I
wish, I
really
wish, you hadn’t told the apothecaries about my…” She
trailed off. The words wouldn’t come.

“About your childhood,” he finished.

She swallowed. “Just because you confide all your thoughts
to your apothecary doesn’t mean I’m willing to. I had more than enough of
psychs and doctors by the time I left my teens, and your apothecaries are both.
And I tested healthy on my psych evals before coming here, you know.”

He cocked his head. “You cannot hide your anxiety from me as
you hid it from your doctors on Earth, beloved.”

“But I don’t know which of the apothecaries know and which
don’t. Not to mention, you
fathered
your own head apothecary. It’s
mortifying.”

“They all seek only your benefit.”

“Even if I wanted an apothecary,” she continued, “it’s not
possible to get any human medical or psychological data, not while you have humans
interdicted. So what would be the benefit?”

“You should be monitored. You even smell different.”

She blinked. She smelled different now? Her sense of smell
was more sensitive than it had been, but apparently it wasn’t as sensitive as
the Sural’s. Yet. “Well, that only makes sense. Different diet, different ...
everything.”

“Can’t it wait until you’ve lifted the interdict and can
trade for information? It’s not like I’m going to die any time soon. Taking the
blessing added 300 standard years to my lifespan. Two standard years is
nothing.”

He fixed her with a look, eyebrows lifted again. “Your logic
is flawed.”

“By the time two standard years have passed, you will be
fully Tolari. My apothecaries will have no need for a human medical archive.”

“Um.” She took a breath and gusted it back out. He had her
there. “All right, I’ll give it more consideration.”

He nodded, but left one skeptical eyebrow cocked. “I have a brief
meeting with my advisors. I will find you afterward.”

She pursed her lips and nodded. He rose from his heavy,
throne-like chair at the head of the table, leaving the refectory in a swish of
embroidered blue robes and ankle-length black hair, his head nearly grazing the
lintel of the doorway as he passed under it. She shook her head. The man was a
giant, well over two meters tall.

A sigh escaped her. Now she was alone at the high table. Even
if she had no intention of confiding in an apothecary, she yearned to just talk
with someone. Unfortunately, she hadn’t been able to build any friendships here.
Her new status as a Tolari high one created an invisible wall separating her
from the other inhabitants of the stronghold. That was the last thing she’d
wanted, but she hadn’t yet figured out how to circumvent it.

To make it all worse, her free time was abundant. She’d come
to Tolar to teach human languages to Kyza, who would one day be her father’s
ambassador to the Six Planets. Now that the girl had passed the trials to
become a member of the ruling caste, Tolari tutors took a larger role in her education,
and Marianne’s waned. With less to do, and more time to not do it in, she was
growing lonely.

She chewed on the inside of her cheek. If only she had
another
human
woman to talk to about it, as she had when Earth Fleet was
in-system. Like Laura Howard, even if the Admiral’s wife was old enough to be her
mother. Or Addie Russell, the Ambassador’s wife, though Marianne strongly
suspected her of being a spook. But they’d been gone for half a season – about
three months on Earth – since the Sural cut off diplomatic relations with
Central Command. For the first time since she’d come to Tolar, no Earth Fleet
ship orbited the planet. It felt like a hole in the sky.

The refectory snapped back into focus. She’d stopped eating
and was staring out a window, lost in thought. No longer hungry, she left her
place at the high table and headed out into the gardens. The midday sun was
warm, and she tilted her face up, drinking it in.

If only Suralia were a tropical province, and I could enjoy
this year-round.

She shook her head, rueful. Suralia was as far from tropical
as it was possible to be, snuggled right up against the glaciers which dominated
the northern hemisphere of Tolar. Perhaps the next winter wouldn’t seem as cold
as the last one, now that she was mostly Tolari. She hoped so.

She hadn’t been wandering the garden paths long when the
Sural dropped out of camouflage and fell into step beside her. She took his arm
with a happy grin. His meeting really had been brief this time. His advisors often
kept him closeted half the afternoon when they wanted a ‘short’ meeting.

She stopped and peered at him. His dark eyes gleamed, and
male pride hummed through him, the same pride she always sensed when he spoke
of the children he’d fathered. “Boy or girl?” she asked.

He broke into a smile that was both pleased and surprised. “You
are improving! A prominent member of the science caste gave birth this morning
to a son I fathered.”

Her mood soured. She turned away into a gazebo.

“Why do they want you, anyway?” she asked as she dropped
onto a bench inside the graceful pavilion.

“I am strong as well as intelligent,” he answered, taking a
seat beside her. She snorted at his serene lack of modesty. “High intelligence
is not always accompanied by physical strength. They seek this from me.”

She didn’t reply, struggling to banish unwanted imaginings
of him with another woman. Tolari ways were not like human ways, she told
herself. It was just reproduction. It had nothing to do with emotion.

She didn’t have to look at his face to know he was aware of
her struggle. The empathic bond went both ways.

“Beloved, this child was conceived a season before we
bonded,” he said, his voice gentle.

“You told me that your heart was mine years before that,”
she countered.

She sagged and swallowed in an attempt to clear the lump in
her throat. When she spoke, her voice sounded hollow in her own ears. “Then
why?”

He rested a hand on her shoulder. “The Sural cannot simply
refuse all requests.”

“A Suralia must experience two seasons of pregnancy and six
to ten seasons of caring for a young child. A Sural is asked only for a few
moments of pleasure.”

“How can you say that?” she challenged him. “I have to share
you with every Tolari woman who has a little power and a promising genetic
analysis.”

“They have no place in my heart.”

“They just have
my
place under your blanket.”

“They have no place under my blanket. I go to theirs.”

Blood rushed to her face. With a wordless noise of
frustration, she jumped up from the bench and began pacing back and forth. “Why
can’t you just be mine?”

Square Snapper (Detective Inspector Burgess) by Middleton, Deborah
The Night Book by Richard Madeley
Heart on a Shoestring by Marilyn Grey
About a Girl by Lindsey Kelk
The Well of Loneliness by Radclyffe Hall
The Challenge by Hart, Megan
The Fame Game by Rona Jaffe
The Soothing Scent Of Earth (Elemental Awakening, Book 2) by Claire, Nicola
Falling Sideways by Tom Holt
Expecting The CEO's Baby - The Complete Series: BWWM Interracial Billionaire Pregnancy Romance by Mia Caldwell