Read Back in her time Online

Back in her time 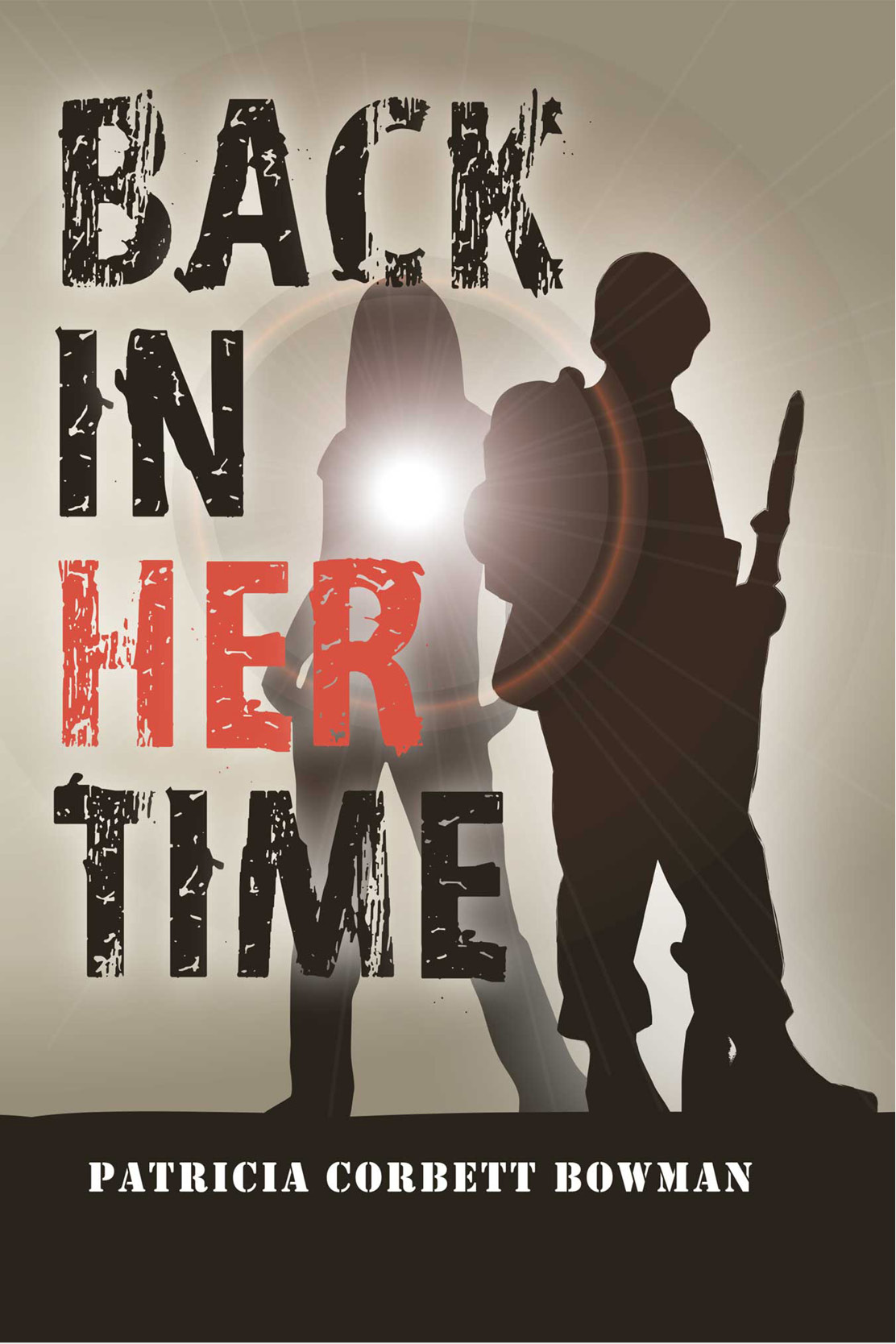 No part of this book may be reproduced, stored in a retrieval system,

or transmitted in any form or by any means without

the prior written permission of the publisher or,

in case of photocopying or other reprographic copying, a licence

Annette Corbett for being my first reader and vocal supporter; Helen Webb for always asking, “What have you written lately?”; Retired Corporal and Acting Sargeant Thomas Marshall (Marsh) Hall of the 8th Army, who shared his stories of the Liri Valley; Christina Volkher for the German translations. Any errors are mine. Jane Charlton for those early years of editing my attempts; and Jack for being my friend and partner.

S
creaming. Everyone is screaming. Falling down, running away. That snobby cheerleader, Janine, tripped over something. Is that a body? She's trying to get up and is making handprints on the stairwell door as she shoves it open and crashes down the stairs. Red handprints? Everything is surreal.

Taylor blinked her eyes open as a firecracker flashed overhead, blinding her for a second. A strong, pungent smell rose from the ground around her. Urine? She scrambled to her feet, but a strong hand shoved her down.

“Where do you think you're going, soldier?”

“What?” Taylor looked up into a familiar face. Her grandfather? Something was wrong, here. “Pops?” she asked the unlined face.

“Pops! You young kids. Look what they're sending me,” said the soldier with three stripes high on his uniform arm.

“Pops. You're so young â”

Taylor ducked down like the soldier, pulling her hard hat down on her head.
Hard hat? What the heck? Where am I? Soldiers? It isn't a hard hat, it's a helmet. I'm not at school. I'm in a bloody war!

Taylor clicked her tongue stud against the roof of her mouth as she always did when she was nervous.
Nothing. It's gone! How did I lose it?

“Here, take a sip,” said Pops, as they sat up, the bombing directly overhead finished. He handed Taylor a canteen.

Taylor drank slowly, trying to figure out where she was and how she got here. The night sky was lit like the Canadian National Exhibition, with shell explosions all around. Taylor looked down at her dust-encrusted uniform.
Uniform? What the hell? Where's my black t-shirt and jeans?
She scratched her arm with her bitten fingernails, where the khaki-coloured material rubbed against her.
Wool
. It always made her itch. Was this a dream? Pops was sitting right here, young and healthy.
What the hell is going on?

“I don't know,” said Taylor. And she didn't.
Wasn't I just standing by my locker with Dieter? It all seems dream-like.

The sergeant grasped her shoulder, “Junior, are you with me?”

“I'm asking the questions, Junior. Where did you come from? What platoon are you?”

“I don't know,” said Taylor, a frown creasing her forehead. She rubbed her hands across her face. Acne still there.

“Are you hurt? Hit anywhere?” The sergeant examined Taylor's face. “Take off your helmet. Any bruises, bumps?”

Taylor gingerly removed her head protection. That's it, she thought. I've hurt my head. She brushed her fingers over her scalp.
Nothing. Same as usual. No, it feels stubbly like a brush cut she sometimes saw boys wear. It should be smooth. Didn't Dieter and I shave our heads this morning? Why is everything about home foggy?

“Hmm. Till we know more about you, you'd better stay close to me,” said the sergeant.

“Sure, Pops,” said Taylor. She wouldn't leave her grandfather's side until she figured out what was happening.

“And don't call me Pops again, Junior. I'm not your gawd-darned father. Hell, I'm only twenty-four. What are you, baby face? Eighteen?”

“Oh, great. I've got an underage, underweight, by the looks of you, supposed soldier who doesn't even know where he came from.” The sergeant narrowed his eyes, “What year is it?” he asked.

Taylor looked around the rocky dirt-and-mud floor. It couldn't be the twenty-first century. “I'm not sure,” she said.
And why is he calling me a “he”? It must be my short hair.

Holy smokes, as Pops would say. It's 1944! I'm back in time with my grandfather, in World War II, and he doesn't even know who I am. How do I explain this to him?

A lieutenant, crouching down, picked his way over the sprawled soldiers' legs. Jabbing a finger in the air, he mouthed, “Moving down the line.”

“Look smart, Junior,” said the sergeant as he thrust a rifle into Taylor's hands.

“Keep moving, Junior. I'm watching you,” said the sergeant as he too moved forward.

“What are you, one of those zombies?” said a voice behind him.

Zombie? Geek is what they usually call me. Or bug-eyes.
Dimly, Taylor remembered Pops talking about Canadians who received postponement of overseas service.
A conscientious objector, that's it.
Turning her head, she saw a soldier about her age. “No, I'm just not sure how I got here,” mumbled Taylor, eyes downcast.

“We all know
that
feeling. One minute you're at home minding your own business, next you're in a trench with Kraut planes dropping screaming mimmies all over you.”

“Yeah, whatever. Hi, I'm Taylor.” Taylor adjusted the canvas sling attached to her rifle, turned and started to put out her right hand to shake the boy's hand, but thought better of it.
Do male soldiers shake hands? Will he think I'm a geek, here, too?

“Your name isn't Taylor anymore, Junior. The Sarge renamed you. I'm Whitey. Guess you can figure out where I got my name,” said the boy as he scratched his short, white-blond hair under his helmet with the barrel of his rifle. “Watch that mess there,” he said, averting his eyes, as he pointed his rifle at something on the ground in front of Taylor.

Too late, Taylor stepped on a mound in front of her. She stared at the pulpy face of a dead soldier.

“It's Mac and Red's turn to look after casualties. Keep walking,” Whitey said.

Taylor felt bile rising in her throat. She swallowed hard, fighting the nausea.

“Just keep moving, Junior.” Whitey patted her on the back.

Taylor lifted her heavy boots, noticing for the first time how wet her feet were.“Gawd, I'd like to change my socks,” she said.

“Check your pack next time we stop,” said Whitey. “Maybe you have a dry pair.”

Taylor touched a strap crisscrossing her back with a little backpack attached.
It wouldn't hold my high school books.
Taylor forgot about her wet feet when she realized the gear was attached to webbing in front containing ammo, grenades, and a bayonet that hung from the belt.
Hey, where did this stuff come from?

The line of soldiers trudged through the mass of slit trenches, like rats in a laboratory maze. Taylor watched how the soldiers marched so she could imitate them. Dieter always told her she walked like a girl, wiggling her ass. It wasn't hard to clog along like the heavy-booted soldiers in her wet socks, blisters rubbing.

Taylor was deep in thought.
How did this happen? What will I do if I have to fire this gun? Would I even know how? Could I kill another human being? Dieter, back home in Toronto, is of German descent. Could I shoot a German boy? Whitey would call Dieter a “Kraut.”

Taylor examined the rifle she carried. It did kind of look like the one Pops kept at the farm where he lived just outside of London, Ontario. Perhaps she could fire it. Hadn't she hit pop cans behind the barn? She was twelve when Pops talked her mother, Margaret, into letting her use it. (Her mom didn't care anyway. All Margaret cared about was where her next drink was coming from.) What was it Pops had said back then when he handed her the rifle?

“You've got to practise, kid. You're going to need to know how to use one in the war.”

“In what war?” Taylor had asked. Was Pops thinking there would be another war, one that Taylor would have to fight in? Like Afghanistan? Would women be called up in a draft like men were in wartime? Pops always talked about war, saying things like, “Remember when we were at the Liri Valley? You really showed the enemy. We got through it, Taylor.”

Taylor had tried to talk to her mother about Pops and his war rants, but Margaret was never sober enough, and her grandmother had never wanted to hear a bad word about her husband. The old fellow was probably having memory lapses, remembering his days in WW II when he was a young man. Taylor must have reminded him of an old friend back then. Perhaps it was the first stages of senility; or worse yet, Alzheimer's.

That was it! Pops knew she would come back in time, to this war. But Pops didn't recognize or know her â yet. How the heck was she going to convince this twenty-four-year-old sergeant that she, Taylor, was his future adopted granddaughter from the 2000s?