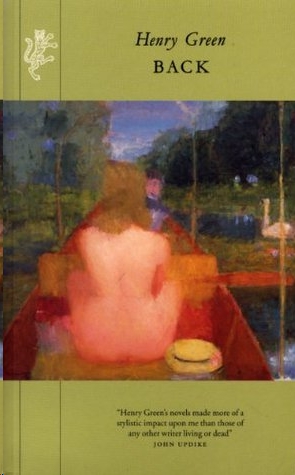 It is 1945. Charley Summers, back from the war in Europe, is home to mourn the death of his lover Rose who lies buried in the village churchyard. Charley is a twentieth-century equivalent to the questing knight of medieval romance: a man injured in combat, searching for a rose that is both a specific young woman and a symbol of lost peace. But Charley is so haunted by the death of Rose, whose image was his guiding light as he lay wounded in a prison camp, that he begins to imagine that her half-sister Nancy is not just like Rose, but is Rose herself.

Moving, disturbing and brilliantly written, the narrative advances almost entirely through dialogue. Back is, according to Jeremy Treglown in his introduction, "Henry Green's most extended attempt to plumb the world of the hunted - and haunted". First published in 1946, it has indeed remained one of Green’s most haunting, elegiac novels and one of the most enduring to have focused on the individual human tragedy of the war.

HENRY GREEN
is the pen-name for Henry Vincent Yorke, the son of a prosperous Midlands industrialist. He was born near Tewkesbury in 1905 and was educated at Eton and Oxford, where he wrote his first novel,
Blindness
, published in 1926. He entered the family business on the factory-floor, and went on to run the firm while writing eight novels as a spare-time occupation. Of his nine novels three relate to World War Two;
Back
is the third of these. In the opinion of Rebecca West he was “the most original … the best writer of his time”, while for L.P. Hartley he was “a spellbinder, a true artist”.

Henry Green
BACK
With an introduction
by Jeremy Treglown
INTRODUCTION

“Hallucination may be a new revelation of the real world,” the novelist and critic Philip Toynbee wrote in 1946 in the all-too-real world of post-Second World War Britain.
1
He was reviewing
Back
, set in the closing phase of the war, when imminent Allied victory was overshadowed for the British by the effects of years of deprivation and by a new hazard in the form of pilotless missiles – to many people, more terrifying than the blitz of 1940–41. Henry Green had already written about the war’s early years in his novels
Caught
(1943) and
Loving
(1945), as well as in some short stories which, as John Updike was to say, operate “at full tilt, bringing to the inferno of blitzed London a descriptive power of almost lurid virtuosity”. Beneath the stylistic fireworks, though, these works were developing a sombre exploration of the human capacity for making chaos – in politics by implication, but above all in personal relationships and in the individual psyche.
Back
, for all its final elements of optimism, is Green’s most painful expression of this theme: so painful that in the escapist literary climate in which it appeared, few reviewers other than Toynbee had much good to say about it.
2
Kate O’Brien, writing in the
Spectator
, summed up the general reaction when she warned people off this “small, grey, personal book: very sad, very narrow … greyly and coldly misted in small, mad sorrow”.
3
It was “a work of art”, she acknowledged, but it was “not for all readers”.

O’Brien was right at least about the art, and also about how personal it is. In terms of Green’s own experience, the book’s roots lay as far back as the First World War, in the second half of which his parents had turned part of their country house, Forthampton Court, on the Gloucestershire-Worcestershire border, into a convalescent home for officers – a domestic version of Craiglockhart, the Scottish hospital where, around the same time, Wilfred Owen had met Siegfried Sassoon. Henry Yorke (Green was his pen-name) was then in his early teens and his encounters with these gassed, shell-shocked, terrified visitors during school holidays had an impact on him all the more forcible
for its contrast with the somewhat daunted confidence which he had previously felt in the apparently invincible world of adult men. (His father was a clever, successful business man and there was a regiment of high-ranking military uncles.) One episode which he later vividly remembered involved a trembling wretch who could not eat or sleep and screamed at the sound of laughter or the banging of doors. One day the man seemed better and set off from the house on a bicycle ride but he quickly turned back, wobbling desperately. Soon after leaving Forthampton, he committed suicide.
4

Elaine Showalter has written that “The Great War was the first and, so far, the last time in the twentieth century that men and the wrongs of men occupied a central position in the history of madness”
5
but men’s writing about subsequent wars suggests that in this respect as in some others, the Great War never in fact ended. Certainly its psychological impact was still being felt in 1939–45 – a point made in
Back
when the grief-bewildered Mrs Grant mistakes Charley Summers on his return from prisoner-of-war camp for her brother, killed in 1917. Henry Yorke’s own elder brother died of leukaemia in the same year and the events of that momentous period may have contributed to a psychological vulnerability which found different kinds of expression in Henry Green’s fiction. One of its manifestations is the intense romantic neediness of characters like the depressed Elizabeth in
Concluding
(1948), who “helped [her lover’s] heart find hers by fastening her mouth on his as though she were an octopus that had lost its arms to the propellers of a tug, and had only its mouth now with which, in a world of the hunted, to hang onto wrecked spars”.
6
Back
is Green’s most extended attempt to plumb the world of the hunted – and haunted – but the theme is present throughout his work, from the (literally) blind dependency of the central character of the first of his nine novels,
Blindness
(1926), through the longings and inadequacies of the fire-station chief Pye in
Caught
(1943) and the butler Raunce in
Loving
(1945), to the amorous idiocy of the middle-aged father, Arthur Middleton, in what proved to be his final book,
Doting
, published in 1952, when Green was still only in his mid-forties.

After
Doting
, the novelist was to lapse into morose fictional silence, a heavy drinker and increasingly a recluse. In 1947 he had written a grimly comic autobiographical sketch about a man with a paranoid
hangover, but it was some years earlier that friends – close women friends, especially, such as Rosamond Lehmann – had begun to talk about how seriously he was drinking. Whisky plays a part in the nightmare of the otherwise abstemious Charley Summers, the central character of
Back
, and Green’s own gin habit may have contributed to what Philip Toynbee described as the book’s hallucinatory nature.

It may also have helped to produce some eccentricities in terms of plausibility, organization and stylistic texture, the most obvious of which is also the book’s most ambitious and far-reaching (if somewhat perfunctorily incorporated) device: the insertion, halfway through, of twelve pages of a translation from a semi-fictional eighteenth-century autobiography, the
Souvenirs
attributed to the Marquise de Créqui. Green’s friend Nancy Mitford had lamented that
Caught
was not
Court
– a novel entirely about upper-class people like the Yorkes themselves, rather than largely about firemen.
7
In an oblique way, the French episode in
Back
answers her regret. Although Green is best known for his depiction of the lives of working-class and lower-middle-class English people, he had always been a devotee of aristocratic French literature and his work often juxtaposes normally divided social milieux. As a young man he avidly read Proust. Among the books to which he returned in the Second World War was
Les Liaisons dangereuses
. And he made more than one translation from the
Souvenirs
, the seven volumes of which are still in the library at Forthampton.
8
He was attracted by the formal artifice of the genre as much as the kinds of society which it depicts, and used the influence with particular success in the construction of his last comedies,
Nothing
(1950) and
Doting
. For now, however, he was mainly intrigued by episodes in the
Souvenirs
which concern obsession and mistaken identity – themes which are also found in his other novels and which are related to his interest in all forms of duplicity, from pseudonyms to bigamy.

The delusion of Charley Summers, in his obsessive grief for the dead Rose, that her half-sister Nancy is Rose herself, closely parallels that of Septimanie de Richelieu in the episode from the
Souvenirs
. Septimanie has been in love with the Comte de Gisors, who married someone else and subsequently died. Through outside intervention, she meets an illegitimate half-brother of the Comte, who is his double. What the narrator of the
Souvenirs
says can also be applied,
mutatis
mutandis
, to
Back
: “I shall never forget this twin attachment, these two extraordinary passions she somehow found a way to lavish on two men who were entirely different and yet at the same time exactly similar, on the living and the dead …. Nor can I ever forget her last moments when … she seemed … to fuse the memory of these two men into one, into one true lover.”

Henry Yorke himself knew what could be involved in trying to fuse two or more powerful relationships. He was married and was very close to his wife’s sister, while being involved, too, in several shorter affairs, particularly during the war, when his wife and son were in the country. One was with a woman named Rosemary Clifford, whom he met in his wartime role as a volunteer fireman; another was with Mary Keene, a former artist’s model who was married at the time to the film-maker Ralph (“Bunny”) Keene. In 1943, Mary spent some time at Dedham, in Essex, with the painter Matthew Smith. Henry visited them there at least once. Redham, the home village of Rose in
Back
, is clearly based on Dedham, and the novelist’s divided affections at the time when he was writing the book seem to lie behind its extravagantly complicated emotions. Some time after the affair ended, Mary Keene wrote a number of comments in her copy. Among them was the chilly sentence, “H. Green’s idea of sublimating the two women into one perfect one is interesting.”
9

Evelyn Waugh, an old friend of Green’s who was one of his severer critics, found the Septimanie passage “irrelevant & inelegant .… Very mad”.
10
It was an over-hasty judgement. In the tradition of neo-classical “imitation”, what
Back
does is to adapt the romantic implausibilities of his eighteenth-century French source to a contemporary kind of psychosis. The whole book is not only an encoded version of Henry Yorke’s personal life but also a tragi-comic depiction of other aspects of the world around him in 1945: widespread fears about the social consequences of demobilization; the impact of war on individuals both through direct injuries – Summers has lost a leg, Middlewitch an arm – and in its anonymization of their familiar surroundings, a phenomenon comically symbolized by the novel’s game with bureaucratic initials. Summers has himself contributed to the mechanical processes of depersonalization by introducing a new filing system at the office: a system which fails to work.