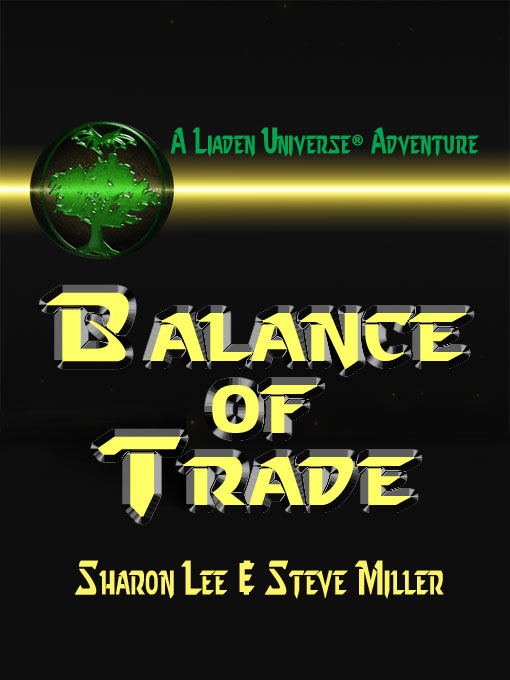 This is a work of fiction. All the characters and events portrayed in this novel are fiction or are used fictitiously. That means the author made it all up.
BALANCE OF TRADE
Copyright © 2003 by
Sharon Lee
and
Steve Miller
.
All rights reserved. No part of this publication may be reproduced or transmitted in any form or by any means, electronic or mechanical, without permission in writing from the author. Please remember that distributing an author's work without permission or payment is theft; and that the authors whose works sell best are those most likely to let us publish more of their works. Portions of this novel were first published in Absolute Magnitude, issue 11 Summer 1999), as the novella "Balance of Trade," by Sharon Lee and Steve Miller
ISBN 1-58787-216-1
Baen Publishing Enterprises
P.O. Box 1403
Riverdale, NY 10471
www.baen.com
First Baen Ebook Published March 2007
Shield of Korval by Angela Gradillas.

Cast of Characters
Gobelyn's Market
out of New Carpathia

Pen Dir
, a cousin, off at school

There are secrets in all families—

"DOWN ALL THAT LONG, weary shift, they kept after Byl," Khat's voice was low and eerie in the dimness of the common room. The knuckles of Jethri's left hand ached with the grip he had on his cup while his right thumb and forefinger whirled ellipses on the endlessly cool surface of his lucky fractin. Beside him, he could hear Dyk breathing, fast and harsh.

"Once—twice—three times!—he broke for the outring, his ship, and his mates. Three times, the Liadens turned him back, pushing him toward the center core, where no space-going man has right nor reason to be.

"They pushed him, those Liadens, moving through the night-levels as swift and sure as if it were bright world-day. Byl ran, as fast as long legs and terror could speed him, but they were always ahead of him, the canny Liadens. They were always ahead—'round every corner, past every turning in the hall."

"BUT THEN!" Khat's voice glittered in the gloom. "Then, all at once, the luck changed. Or, say, the gods of spacers smiled. He reached a corridor that was empty, turned a corner where no Liaden crouched, gun aiming for his heart. He paused then, ears craned to the rear, but heard no stealthy movement, nor boot heels sounding quick along the steel floor.

"He ran then, light of heart and all but laughing, and the way stood clear before him, from downring admin all the way to the outring, where his ship was berthed; where his mates, and his love, lay awaiting his return.

"That was when he saw the crowd, and the flashing lights that meant ring cops—and the others, that meant worse.

"He shouted and ran, waving his arms as if it all made a difference. Which it didn't. Those lifelines had been cut good hours ago, while he had been harried, hounded and kept away—and there was eight zipped bags laid out neat on the dockside, which was all that was left of his mates and his love."

Silence, Jethri's jaw was so tight he thought teeth might shatter. Mel gasped and Dyk groaned.

"So," said Khat, her voice shockingly matter-of-fact. "Now you see what comes to someone who cheats a Liaden on cargo."

"Except," Jethri managed, his voice breathless with tension, though he knew far better than what had been told—Khat on a story was
that
good. "Excepting, they'd never done it that way—the Liadens. Might be they'd've rigged something with the docking fees—more like, they'd've set the word around, so five ports later Byl finds himself at a stand—full cans and no buyers, see? But they wouldn't kill for cargo—that's not how their Balancing works."

"So speaks the senior 'prentice!" Dyk intoned, pitching his voice so deep it rumbled inside the steel walls like a bad encounter with a grabber-hook.

"Khat tells a good story," he muttered, and Dyk produced a laugh.

"She does that—and who's to say she's wrong? Sure, you been studying the tapes, but Khat's been studying portside news since before you was allowed inside ship's core!"

"Not that long," Khat protested mildly, over the rustle and scrape that was her moving along the bench 'til she had her hand on the controls. Light flooded the cubby, showing four startlingly similar faces: broad across the cheekbones and square about the jaw. Khat's eyes, and Jethri's, were brown; Dyk and Mel had blue—hers paler than his. All four favored the spacer buzz, which left their scant hair looking like dark velvet caps snugged close 'gainst their skulls. Mel was nearest to Jethri in age—nineteen Standards to his seventeen. Khat and Dyk were born close enough to argue minutes when questions of elder's precedence rose—twenty Standard Years, both, and holding adult shares.

Their surname was Gobelyn. Their ship was
Gobelyn's Market
, out of New Carpathia, which homeworld none of them had ever seen nor missed.

"Yah, well maybe Jethri could tell us a story," said Dyk, on the approach of mischief, "since he knows so many."

Jethri felt his ears heat, and looked down into his cup. Koka, it had been—meant to warm his way to slumber. It was cold, now, and Khat's story was enough to keep a body awake through half his sleep-shift.

Even if he did know better.

"Let him be, Dyk," Khat said, surprisingly. "Jethri's doing good with his study—Uncle's pleased. Says it shows well, us having a Liaden speaker 'mong us."

Dyk started to laugh, caught something in her face and shrugged instead. Jethri wisely did not mention that his "Liaden speaking" was barely more than pidgin.

He slipped out of the cubby and paused, weighing the likelihood of sleep against the lure of a history search on the fate of Byl—and the length of Uncle Paitor's lecture, if he was found reading through his sleep shift again.

That was the clincher, his uncle being a man who warmed to a scolding. Sighing, Jethri turned to the right. Behind him, in the cubby, he heard Dyk say, "So tell us a scary one, Khat; now that the kid's away."

HAVING FOUND SLEEP late, it was only natural that Jethri overslept the bell, meaning hard biscuit and the dregs of the pot for breakfast. Chewing, he flipped through the duty roster and discovered himself on Stinks.

"Mud!" he muttered, gulping bitter coffee. It wasn't that he begrudged his cousins their own round of duty—which they had, right enough; he wasn't callin' slackers—just, he wished that he might progress somewhat above the messy labor and make-work that fell his lot all too often. He had his studies, which was work, of its kind; emergency drill with Cris; and engine lore with Khat. 'Course, him being youngest, with none on the ladder 'neath him—that did go into the equation.
Some
body had to do the scutwork, and if not juniormost, then who?

Cramming the last of the biscuit into his mouth, he scanned down to dinner duty—and nearly cussed again. Dyk was on cook, which meant the meal would be something tasty, complicated and needful of mucho cleanup. Jethri himself being on clean up.

"That kind of shift," he consoled himself, pouring the dregs of the dregs into the chute and setting the cup into the washer. "Next shift can only be better."

Being as they were coming into Ynsolt'i Port next shift, barring the unexpected, that at least was a given. Which realization did lighten his mood a fraction, so he was able to bring up a thin, tuneless whistle to stand him company on his way down to the utility lockers.

HE WORKED HIS way up from quarters, stripping the sweet-sheets off sleeping pallets, rolling up the limp, sweat-flavored mats and stuffing them into the portable recycler. Zam, Seeli, and Grig were on Opposite; the doors to their quarters sealed, blue privacy lights lit. Jethri left new sheets rolled up and strapped outside their doors and moved on, not in any particular scramble, but not dallying, either. He had it from experience that doing Stinks consumed considerably less time than was contained inside a duty-shift. Even doing Stinks thoroughly and well—which he had better or the captain'd be down his throat with her spacesuit on—he'd have shift left at the end of his work. He was allowed to use leftover duty time for study. What had to be measured with a fine rule was how much time he could claim before either Uncle Paitor or the captain called slacker and pulled him down to the core on discipline.

Stinks being a duty short on brain work, the brain kept itself busy. Mostly, Jethri used the time to review his latest studies, or daydream about the future, when he would be a trader in his own right, free to cut deals and commit the ship, without having to submit everything to Uncle Paitor, and getting his numbers second-guessed and his research questioned.

Today, the brain having started on a grump, it continued, embroidering on the theme of scutwork. Replacing the sheets in his own cubby, he tried to interject some happy-think into what was threatening to become a major mood, and found himself on the losing side of an argument with himself.

He was juniormost, no disputing that—youngest of Captain Iza Gobelyn's three children—unintended, and scheduled for abort until his father's golden tongue changed her mind.

Despite unwelcome beginnings, though, he was of value to the ship. Uncle Paitor was teaching him the trade, and had even said that Jethri's researches into the Liaden markets had the potential to be profitable for the ship. Well, Uncle Paitor had even backed a major buy Jethri had suggested, last port, and if that didn't show a growing faith in the juniormost's skill, then nothing did.

That's all right
, the half of himself determined to set into a mood countered.
Uncle Paitor might allow you value to the ship, but can you say the same for your mother?

Queen of the Dark Things by C. Robert Cargill
Caught in the Storm by M. Stratton
Tracers by J. J. Howard
Vegas Pregnancy Surprise by Shirley Jump
The Crystal's Curse by Vicky de Leo
Chicago Heat by Jordyn Tracey
In the Wind: Out of the Box, Book 2 by Robert J. Crane
Raven's Hand by James Somers
14 Flipping Out - My Sister the Vampire by Sienna Mercer
Charmfall by Chloe Neill